For the last in our series of blogs for Disability History Month I have chosen to write about Rosa May Billinghurst, an active member and organiser of the Women’s Social and Political Union (WSPU).

Born in 1875, May [Rosa May] Billinghurst was commonly called the ‘cripple suffragette’ because as a child she became ill and was paralysed. As a result, May was a regular at suffrage demonstrations in her hand-tricycle which she propelled herself, and it is said that her appearance at suffrage events attracted much attention to the movement. 1

Billinghurst was first arrested for her militant campaigning in 1911 for obstructing police at a demonstration in Parliament Square. Interestingly, this arrest has not made it into the Home Office’s index of suffragettes arrested. The first mention we find of her is from March 1912,  in relation to the WSPU’s window smashing campaign. 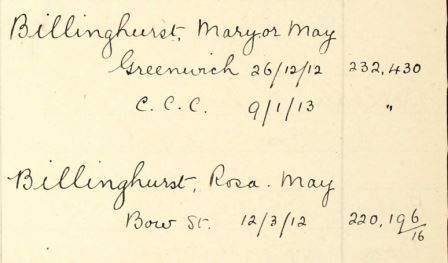 Between 1910 and 1912 Parliament considered various bills to give some women the vote but ultimately none of them passed. In response, the WSPU organised a window smashing campaign in the March of 1912 which led to 220 arrests. The campaign was focused on the West End of London and ‘on 1 March, 150 women were given hammers, told exactly when to strike and how to avoid falling glass’. 2

As part of the campaign, May smashed a window on Henrietta Street. She was sentenced on 12 of March to one month’s imprisonment. 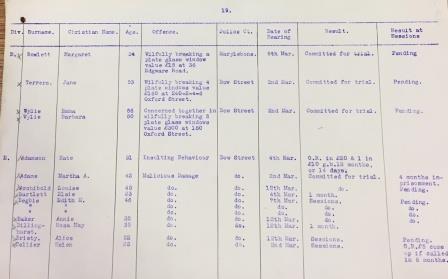 The window smashing campaign and subsequent arrests were reported widely in the press. Many, but not all, of the women involved are mentioned by name within the newspaper cuttings kept by the Home Office, although May is not. Her disability, however, is noted. Here we see that May is being referred to as a ‘cripple’ not only by her peers but also by the press. 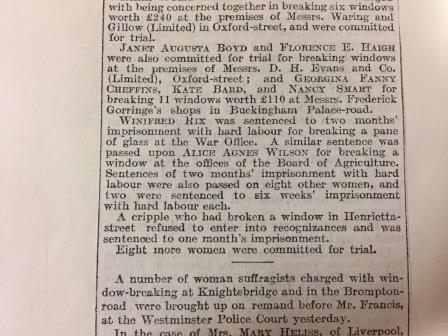 While it was seemingly a defining characteristic for journalists, it seems that May’s disability did not hold her back from taking part in militant activities. Neither, it seems, did the treatment she received at the hands of the police. In evidence collected by WSPU members and passed to the Parliamentary Conciliation Committee for Women’s Suffrage, May recalls the treatment she received on Black Friday in 1910. 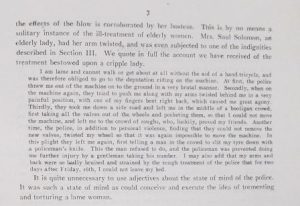 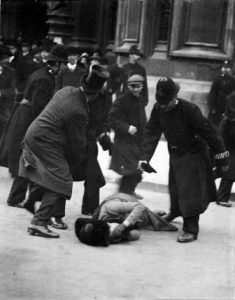 After the violent encounters on Black Friday, and her involvement in the window smashing campaign in 1912, May still continued to campaign for women to get the vote. In December 1912 she was charged with damaging letter boxes in Deptford and was sentenced to eight months in prison. She was forcibly fed in prison and was released after two weeks. After this spell in prison she continued to support the WSPU’s leadership and carried on campaigning by chaining herself to the railings of Buckingham Palace. 3

Despite reportedly causing a stir at demonstrations in her hand-tricycle, Billinghurst was not the only disabled suffragette. Adelaide Knight was another disabled suffragette who campaigned while using a stick. May and Adelaide would have had different experiences of the suffrage campaign from those demanding the vote alongside them; however, this did not seem to deter them. Both women campaigned vigorously for women’s right to vote in Parliamentary elections and did not let their disabilities get in their way.

You can read about similar stories within our collections by reading our other blogs marking this year’s Disability History Month:

If you are interested in women’s suffrage more broadly, I’d suggest taking a look at our upcoming events – we have plenty planned for next year to mark the centenary of some women getting the Parliamentary franchise.

For guidance on researching the topics covered in this blog I would recommend our research guides on disability history and women’s suffrage.