Rights, resistance and racism: the story of the Mangrove Nine

Next month The National Archives and the Black Cultural Archives will hold two workshops for 18-25 years olds using spoken word to bring black British history to life. These events will follow the story of the Mangrove Nine.

The trial of the nine arguably represents a high point of the Black Panther movement in the UK, showing the power of black activism and the institutionalised police prejudice. But what prompted the backlash of black British people against the police? And what sparked one of the show trials of the century?

We hold the original complaints of Frank Crichlow in 1969 to the Race Relations Board. This complaint was in relation to Crichlow’s restaurant The Mangrove, which was located in Notting Hill. The restaurant opened in March 1968, quickly becoming a centre for the black community, attracting intellectuals, creatives and campaigners.

The restaurant was repeatedly raided by police. Although the raids were carried out on the basis of drug possession, drugs were never found and Crichlow’s own anti-drugs stance was well known in the community.

In his complaint Crichlow directly states ‘I know it is because I am a black citizen of Britain that I am discriminated against’ (CK 2/690). The Race Relations Act 1968 made it illegal to refuse housing, employment or public services on the grounds of colour, race, or ethnic or national origins.

The raids on the Mangrove were seen as reflecting a wider culture of oppression. 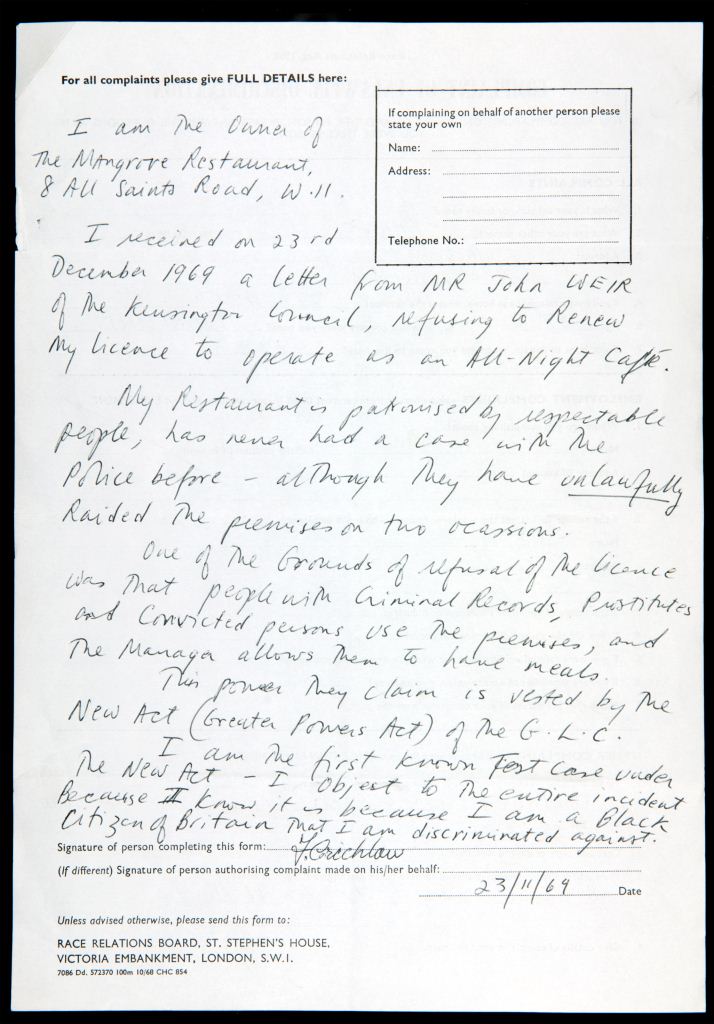 The march on Portnall Road

In response the black community and allies took to the streets to protest on 9 August 1970. The demonstration was organised by a small group from The Action Committee for the Defence of the Mangrove and the Black Panthers. This included Frank Crichlow and barrister Anthony Mohipp, secretary of the Black Improvement Organisation.

This open letter written by Mohipp announced the demonstration and set out community grievances. It was sent to the Home Office, Prime Minister, Harold Wilson (leader of the opposition) and the High Commissioners of Jamaica, Trinidad, Guyana and Barbados (HO 325/143). 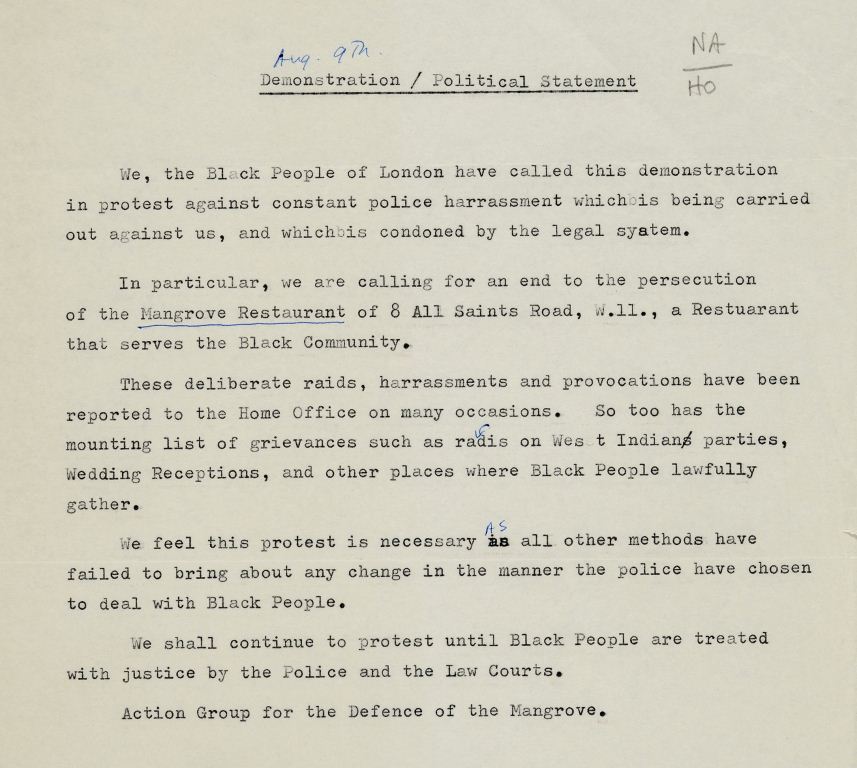 The protesters were met with a disproportionate police response: There were 150 demonstrators at the beginning of the march accompanied by 200 police.

The Metropolitan Police files follow the subsequent demonstration, detailing the strategic police response and witness statements from the police and other people involved. The material includes evocative images of these protests. Photographs such as this were used by the police to suggest that key allies of the Black Power movement  were implicated in planning and inciting a riot.

Later a Home Office commissioned report from the Community Relations Commission concluded that contrary to the police reports the violence was not initiated by the marchers but by the police. 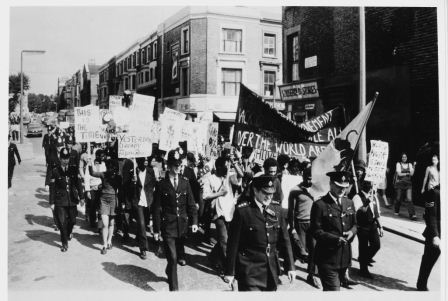 Darcus Howe and Althea Jones-Lecointe took the bold move of being their own defence and arguing for an all black jury under the Magna Carta’s ‘jury of my peers’ clause, turning the court case into a public spectacle and exposing the contradictions in the prosecution’s case. In Jones-Lecointe’s closing speech she referred in detail to the police persecution experienced by the black community in Notting Hill.

Pickets were organised outside the trail at the Old Bailey, and literature handed out to raise public awareness of the case. 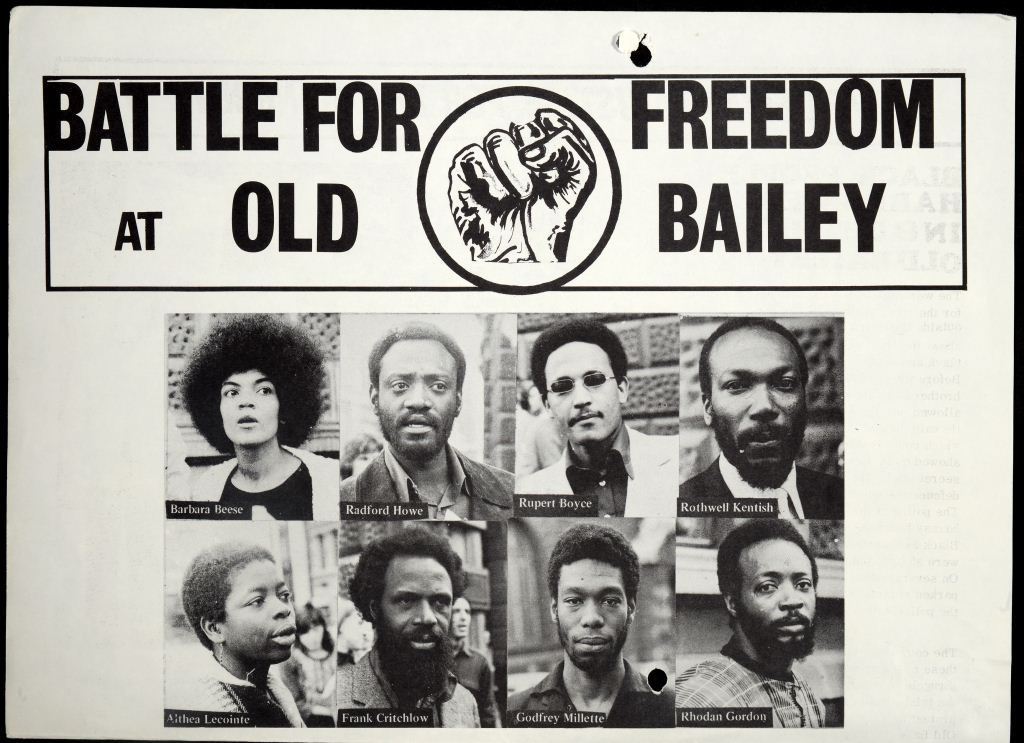 Flyer calling for justice for the Mangrove Nine,1970. In the tenth week of the trial these were distributed to black people around the court and Notting Hill to raise awareness of the case (catalogue reference: HO 325/143)

The trial of the Mangrove Nine lasted 55 days. The final verdict was reached by the jury after eight and quarter hours of deliberation, and on the most serious charge of riot all were cleared. The trial had also succeeded in winning popular support.

In his closing remarks Judge Clarke commented, ‘What this trial has shown is that there is clearly evidence of racial hatred on both sides’ – this watershed statement went a small way to recognised police wrongdoing and racial prejudice (HO 325/143).

Black British Civil Rights: the story of the Mangrove Nine

These events will use original documents, debates and spoken word to explore themes of protest, civil rights and racism. The spoken word workshop will be led by internationally-renowned poet Roger Robinson.

Let’s talk about the Mangrove Nine