Home > Blog > Riding for the G in GAP

Riding for the G in GAP

To mark the centenary of the Somme Offensive we will be producing a series of blogs that explore the contribution of certain Commonwealth nations to the infamous land battle that has so dominated our perceptions of the British Army during First World War. This blog series will briefly explore the contributions of some of these nations through the collections here at The National Archives.

Following the bloody opening to the battle told through the experience of the Newfoundland Regiment at Beaumont Hamel, this blog will look at the role of the Indian cavalry further south at the Battle of Bazentin Ridge, culminating in the charge of the 20th Deccan Horse at High Wood.

The Deccan Horse had left Bolarum outside Hyderabad on 16 September 1914 and landed in Marseilles on 12 October. Here they added to the Indian Corps sent to support British operations on the Western Front. While the infantry of that corps were sent to Mesopotamia at the end of 1915, the cavalry remained.

The role of the 2nd Indian Cavalry Division – and thus in turn the Secunderabad Cavalry Brigade and 20th Deccan Horse – on the opening days of the Battle of the Somme was to maintain communications between the attacking units of III and XV Corps. Should the German line collapse, the Indian cavalry – along with two infantry and cavalry divisions in reserve – would be charged with exploiting the breach; they would ‘ride for the G in GAP’, a sardonic cavalry phrase based on map referencing using printed place names (see the fifth image for an example). 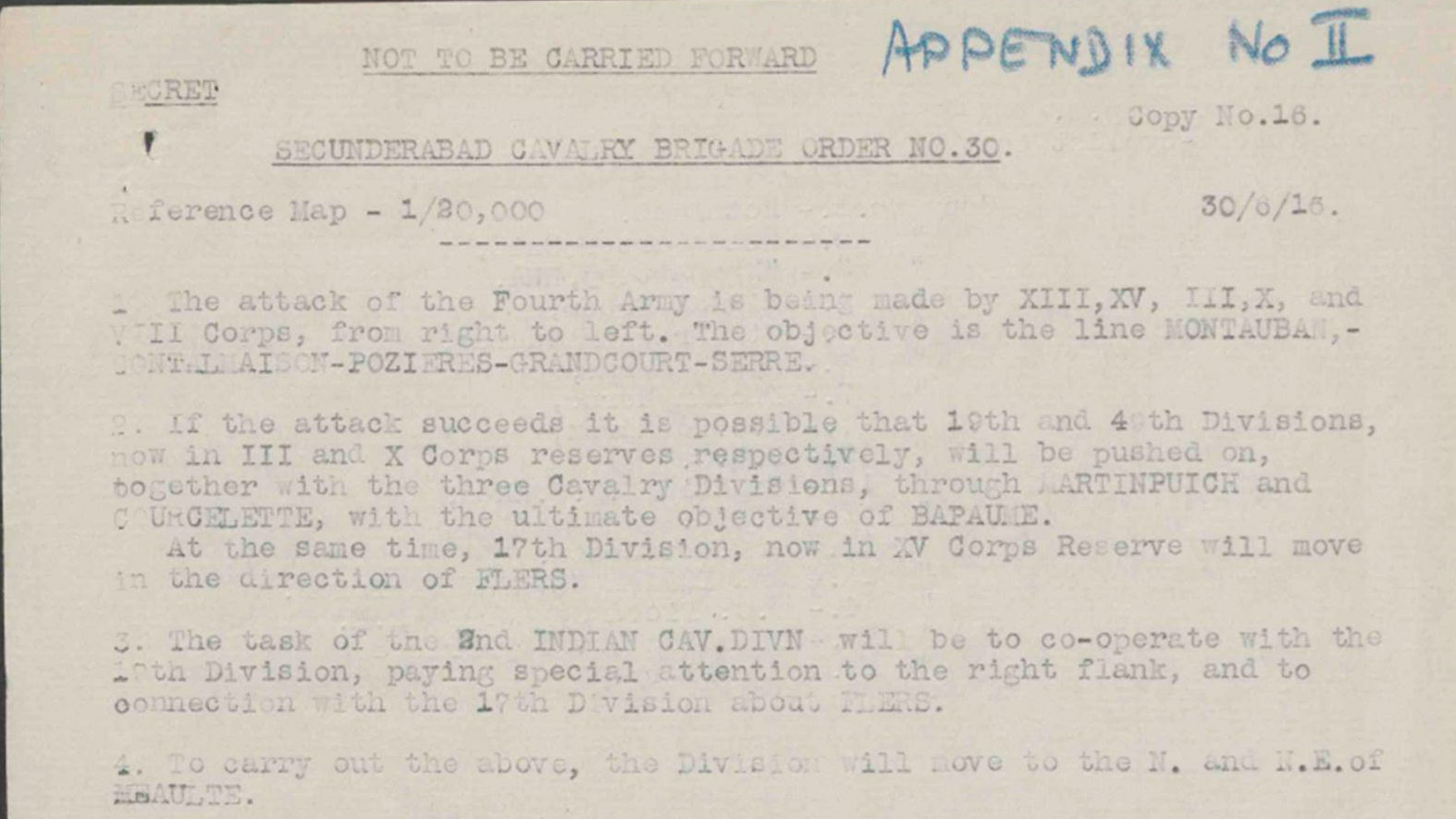 On 1 July, the brigade HQ was based at Bussy-lès-Daours, just outside Amiens, and sent patrols to reconnoitre potential lines of advance should the front open up. Though not called forward in these opening stages, the brigade spent 7-10 July sending working parties from its constituent regiments to bridge the trenches and obstacles of the British and German front lines east of Albert. Somewhat contrary to the popular image of the idle cavalry, this process was designed to ease its passage across the battlefield should it be required.

Although the progress of the battle had meant the Secunderabad Brigade was not called upon, it was ordered to concentrate under canvas one mile south of Méaulte on the outskirts of Albert around midday on 13 July. Here, presumably after little rest and with frayed nerves, the brigade continued to work on tracks across the trench systems before it received new orders at 01:00 the following morning. These orders notified the whole of 2nd Indian Cavalry Division of the impending attack by XIIIth and XVth Corps on the Delville Wood-Longueval-Bazentin line; as well as this notification, the division was also given two objectives should the German line be broken by the infantry’s advance – High Wood and Flers just beyond.

By 01:30 the whole Secunderabad Brigade was once again on the move towards assembly positions half a mile north of Bray-sur-Somme, watering their horses en route. At 06:15 it received further orders to move to positions west of Billin Copse, and finally concentrated in the Montauban valley at 08:00. 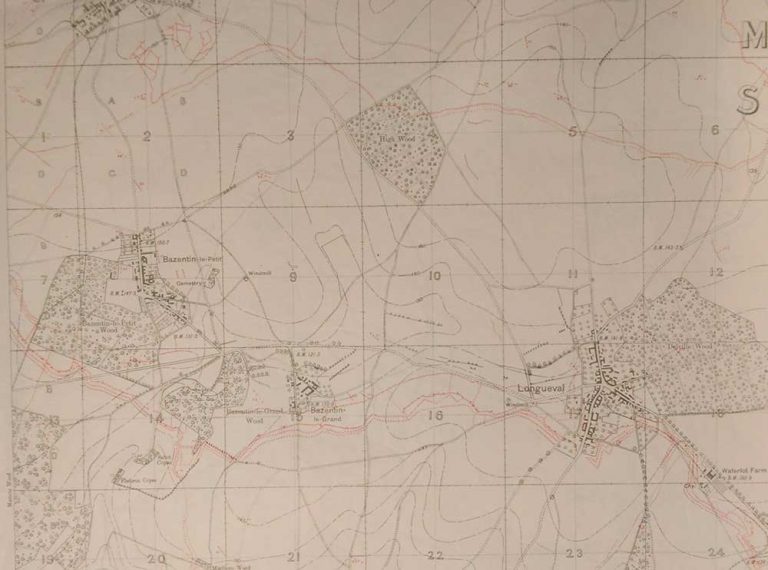 From here, working parties of the Deccan Horse and Poona Horse continued their efforts filling shell holes and making further trench crossings, while patrols were sent out to reconnoitre approaches to High Wood. These patrols rode out to the west of Montauban towards Bazentin at 09:30, although they were pushed back with the British infantry around 12:00 following a German counter-attack.

Shortly after 16:30 – following more than 24 hours of suspense – the 2nd Indian Cavalry Division was finally ordered to stand-to as the 7th Infantry Division’s attack on High Wood was to be made at 18:15. The Secunderabad Brigade recalled its working parties in anticipation and received further orders at 17:40 to move to a position south of Sabot Copse behind the Bazentin woods, arriving there around 18:25. 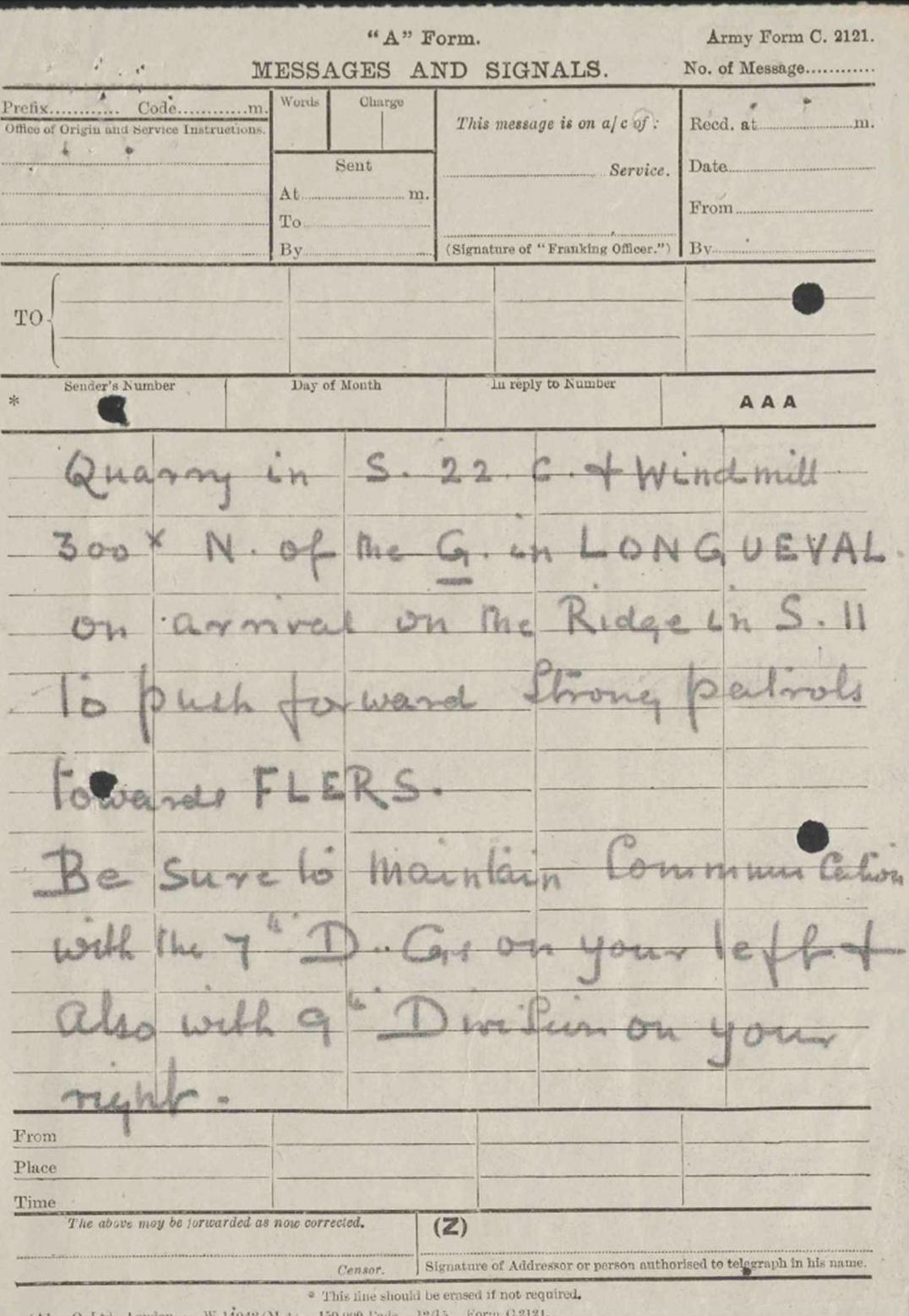 From here, the brigade moved forward into action, carrying with it its machine guns; the 20th Deccan Horse on the right and the 7th Dragoon Guards on the left. At 21:00, as they approached a field of crops in support of the 7th Division east of High Wood – by now under a heavy barrage and in fading light – the advanced squadrons of the 20th Deccan Horse flushed a quantity of German infantry from cover. Caught out in the open, these men provided the cavalry with its one opportunity to charge during the Somme battles. Galloping through rifle and artillery fire, wielding both lance and sword, the commanding officer of the brigade reported on their ‘spearing 16, and capturing 32’.

The cavalry had long since dismounted by the time darkness descended and had dug-in alongside the infantry in the defensive line running south-east of High Wood. They were eventually withdrawn early the following morning. Three men of the Deccan Horse had been killed in the action and another four would succumb to their wounds by 18 July, while 45 were wounded and one man was recorded missing. Their horses had suffered more, with 12 killed, 52 wounded and six missing, in part a result of the need to dismount once the ground was secured. Although The National Archives does not hold service records for the Indian Army (they can be found at the British Library), we do have medal cards – including that of Jemadar Konsal Singh, one of those injured. 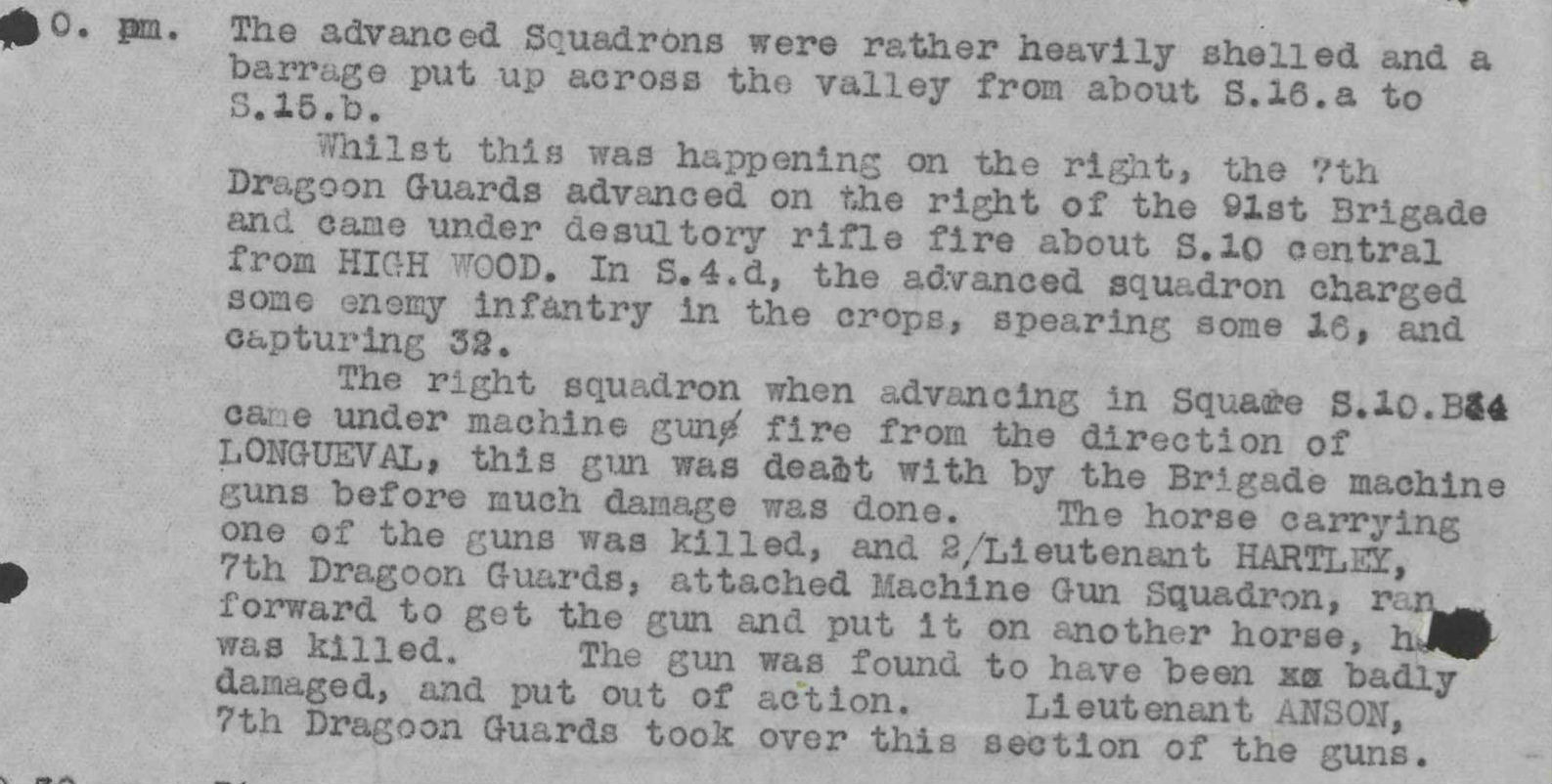 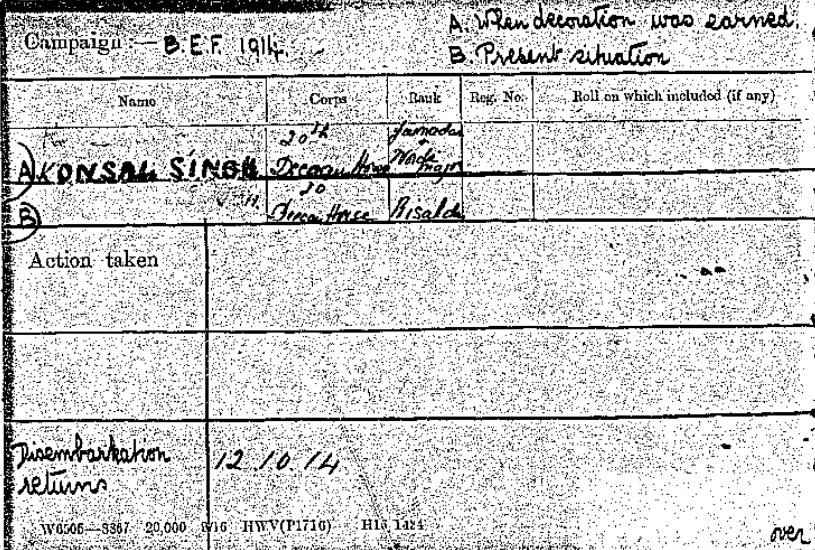 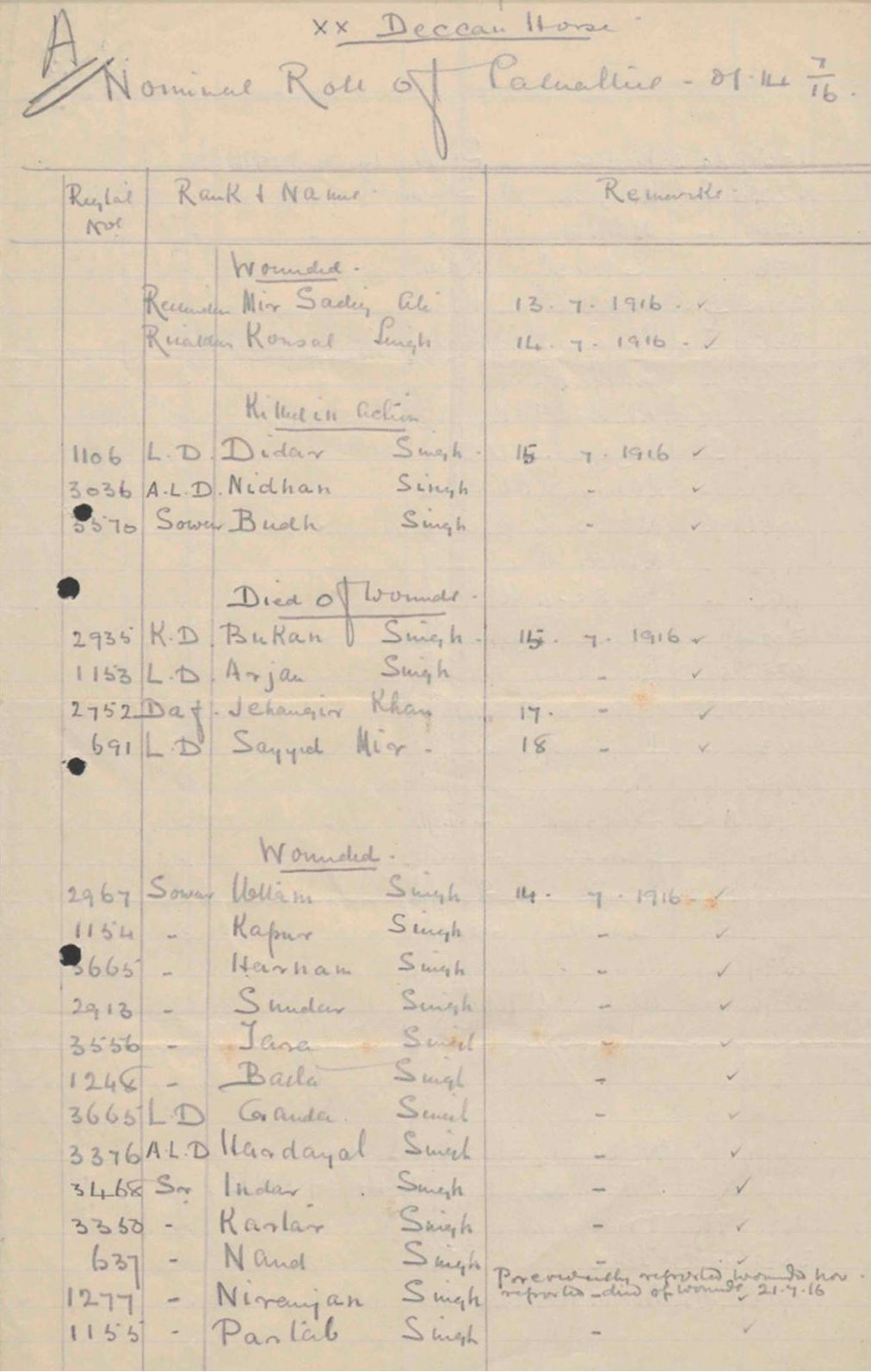 The cavalry action at High Wood generally attracts a degree of romanticism and criticism for the seemingly anachronistic use of edged weapons on a modern battlefield; armed with lances and swords, and mounted on vulnerable horses, the Deccan Horse charged headlong into rifle and artillery fire. On closer inspection of the war diaries, however, what the regiment’s experience demonstrates is not only the potential versatility of the cavalry – operating dismounted when necessary, bringing its machine guns to bear and bridging its way across the obstacle-strewn battlefield – but also what could be achieved in very specific circumstances. While those circumstances were rare beyond the battlefields of the Middle East and could prove unthinkably costly if got wrong, it remained true that no contemporary technology – not tanks, not armoured cars, not bicycles – could cross rough terrain as quickly or efficiently as the horse. Just how necessary the use of steel weapons was is something that will continue to attract debate, as will the failure to find and exploit a ‘gap’, but it is clear that the Secunderabad Cavalry Brigade made a useful contribution to the battle and did so with minimal casualties in comparison to the wider experience on the Somme. It might well be because of this that they received favourable mention in Haig’s despatch – himself a cavalryman, and one in need of good news.