Researching Colonial Office records can be a slightly daunting prospect as the catalogue detail tends to be too sparse for effective keyword searching. To help researchers, The National Archives recently published a guide to Colonies and dependencies from 1782, which we hope will be very useful. But by way of an example, let’s consider researching an outbreak of bubonic plague in West Africa.

The third great bubonic plague pandemic, which began in China during the 1850s, spread along shipping lanes and reached many ports by the end of the century. Colonial officials took outbreaks very seriously because of the deadly nature of the disease and the potential to cause epidemics. At the time of the First World War, colonial medical officers considered the disease to be endemic in West Africa. Localised but regular outbreaks occurred in the British colonies of Sierra Leone, Gambia, Gold Coast (Ghana since 1957) and Nigeria throughout the war years.  Plague was an important factor in the medical history of the region and, along with tropical diseases like yellow fever and malaria, a major influence on urban planning, sanitation and the layout of towns. 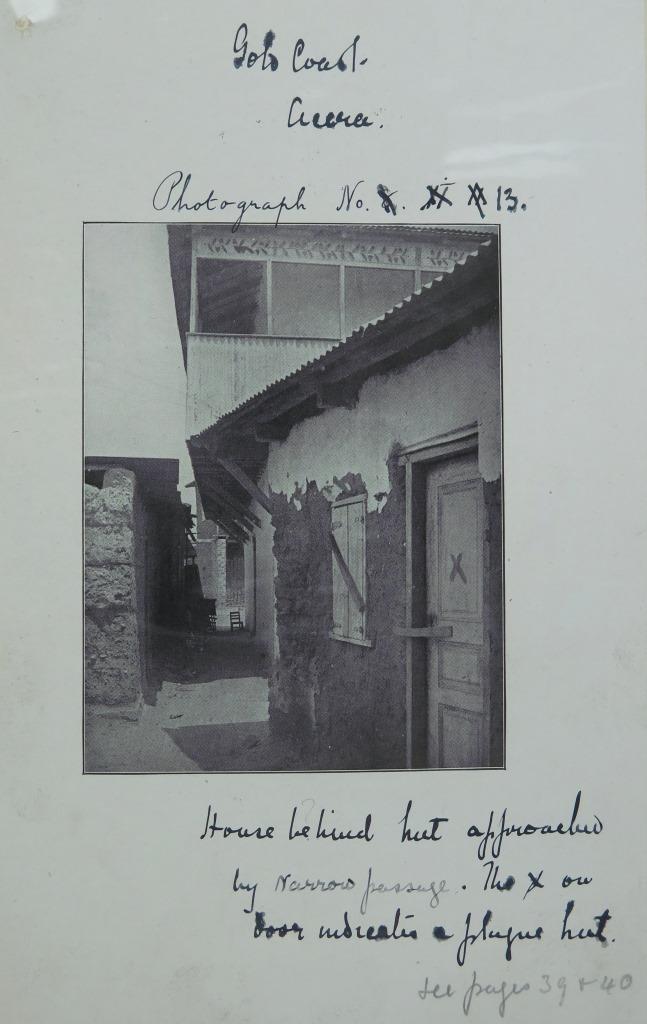 Suppose that we are researching the medical history of Gold Coast during the First World War and want to find out more about the occurrence of bubonic plague there. The original correspondence relating to Gold Coast that was received by the Colonial Office would be a good place to start. These letters, notes and reports are now held in catalogue series CO 96.

Nevertheless, a catalogue search of CO 96 for 1914 to 1918 using ‘plague’ as keyword produces no results. This is surprising given that plague was a major concern of colonial medical officers at that time. They knew how the disease spread to humans through rats and fleas and had tried and tested means, such as quarantine and rat extermination, to prevent its spread. They could identify in the laboratory the causal bacteria, Yersinia pestis; there was a reasonably effective vaccine, Haffkine’s prophylactic, developed in India by the Ukraine-born immunologist Waldemar Haffkine.
The reason for the lack of results is that most Colonial Office correspondence series are not catalogued in any detail before 1926. Catalogue description includes only a term indicating the category of sender and a date range. 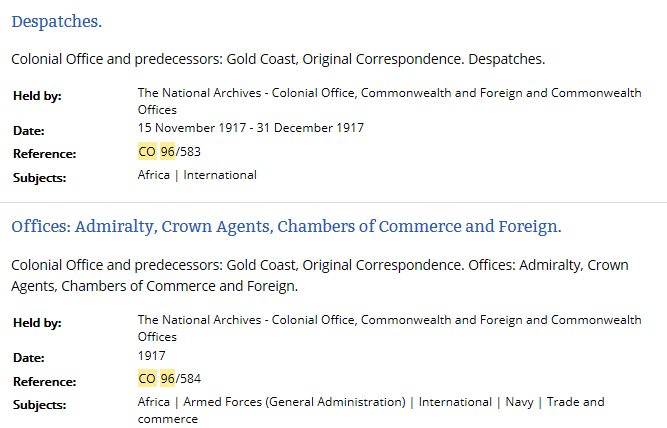 The fact that we can’t use keyword searching to identify relevant documents presents a research problem. To check for occasional references to plague we would need to order all the correspondence volumes and go through them page by page to find relevant material. If we were looking over a 20 to 30 year period, there might be over 200 volumes – quite a daunting task. The problem would be compounded if we were taking a comparative approach across different colonies.

But there is a quicker way – using the finding aids created by the Colonial Office clerks at the time. When correspondence arrived, clerks entered the details into registers, recording all the information necessary to retrieve it after it had been filed. These registers are now at The National Archives, with a separate catalogue series for each former colony. A quick catalogue search shows that the series for Gold Coast registers is CO 343 and the register for 1917, for example, is at CO 343/25. 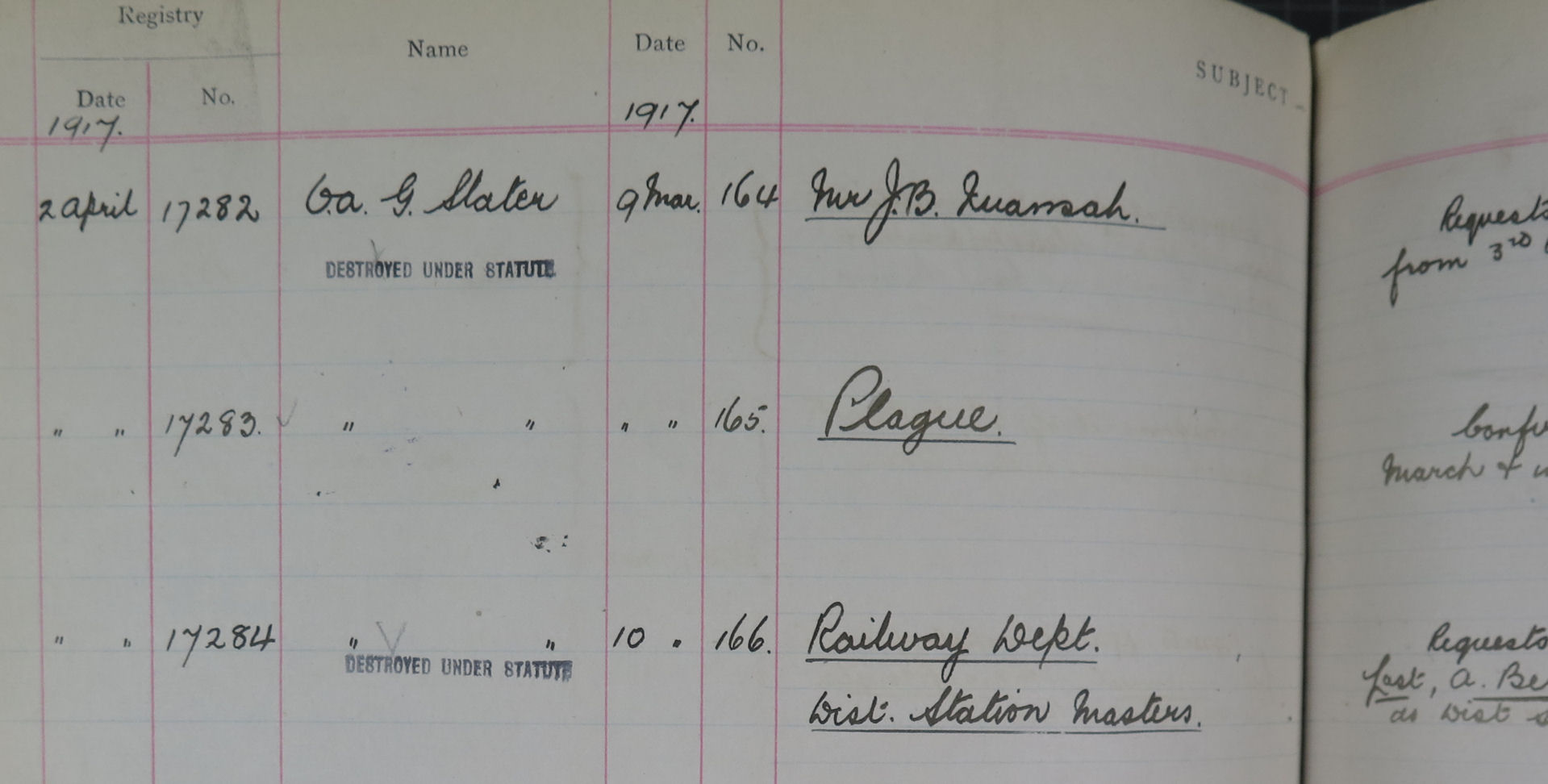 A Colonial Office register of correspondence recording the receipt of a despatch on an outbreak of plague: CO 343/25 Gold Coast Register of Correspondence.

The item with registry number 17283 was sent by the Governor of the Gold Coast, Alexander Slater, on 9 March 1917. This means that the original should be bound into a volume in series CO 96 entitled ‘despatches’ and covering 9 March 1917. A catalogue search shows that this is at reference CO 96/578.  Having ordered this volume, it’s easy enough to find the following cover or ‘docket’, as the correspondence is filed in order of date sent.

The details on the cover confirm that this is the correspondence we have been looking for. Inside are several reports from the medical and sanitary officers about an outbreak of a disease at the village of Ofako, near Accra, in February 1917. The Sanitary Officer feared that the disease could spread to Accra and he reports on the number of deaths and the preventive measures taken. 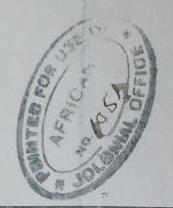 In the top left-hand of the cover there is a stamp which indicates that this correspondence was printed for the use of the Colonial Office and gives the number African 1051. If correspondence was considered sufficiently important it was typeset and printed for circulation as ‘confidential print’.  The African confidential print is in series CO 879, and Africa 1051 is in catalogue reference CO 879/118/4. Here, the despatches on plague can be read together and in a more convenient form – but, as the title is in quite general terms, it would still have evaded a catalogue search on plague. This illustrates that it’s important to think carefully about keywords: what terms would have been used at the time, or would the content be covered by a more general term? 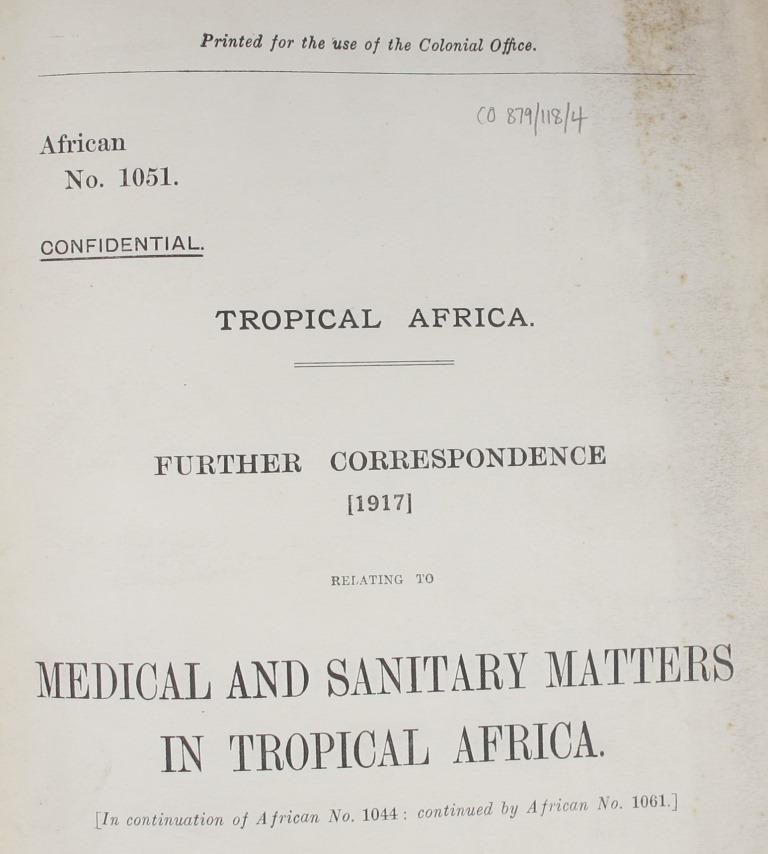 These reports contain much valuable information, as the Sanitation Officer outlines in detail measures taken against a further outbreak in Accra, as well as where the disease had spread by March 1917. He also discusses the attitude of the local people. Sanitary measures and quarantines, which frequently caused hardship to local people and interfered with their daily lives and business, were often mistrusted. They feared the disease and resented being quarantined in its proximity. The control of disease was a social and political question, not only a technical or scientific matter. 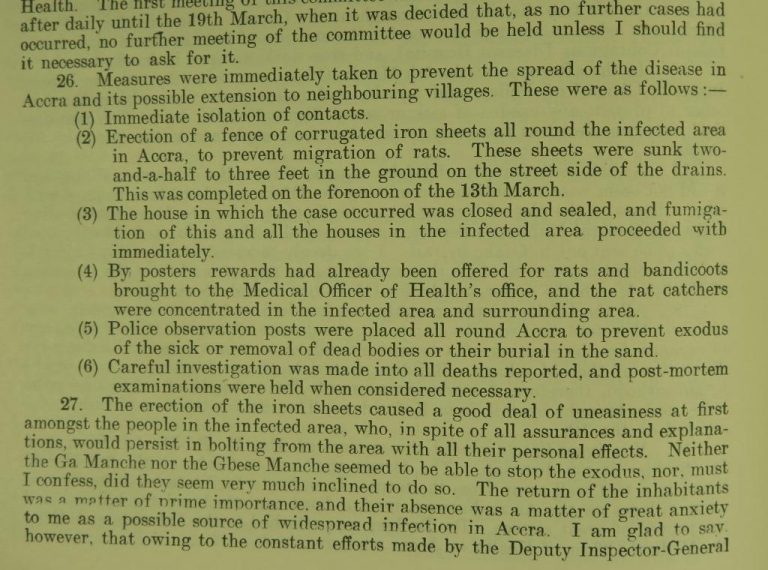 The Colonial Office correspondence is a rich source for medical history, but other relevant information can be found in the colonial government gazettes, annual statistical reports and papers of the local councils and assemblies. You can read more about these sources and how to research Colonial Office correspondence in our online guide to Colonies and dependencies from 1782.