With the end of another football season, I have to grudgingly admit the Red Devils from Manchester are the best team again. To win 20 top tier titles, compared to my team’s record, is certainly worth a mention. Football has also lost a great character and manager with the retirement of Sir Alex Ferguson.

So after watching another dreary performance from my team, I thought: What can the Archives tell you about football? A fair amount, judging by a search of our catalogue, Discovery. It is a wonder what a quick random search of a catalogue can find. 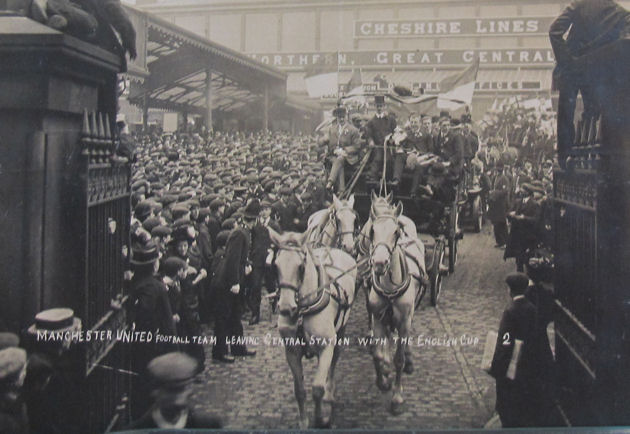 The 1958 Munich Air disaster is well recorded in files from PREM 13, FCO 14, TS 58,  BT 248 and AVIA 101. These include reports into the disaster. The re-opened inquiry files in BT 248 give a far more vivid explanation of the disaster – but don’t panic if you are unable to read German, they are in English as well.

When it comes to transfer fees, even the Treasury have been involved. They have a file on the transfer of Dennis Law from Torino to Manchester United in 1962. The file in T 231/1366 contains a letter from a disgruntled fan. He threatens to change his vote unless the government relax the tax on transfer fees. 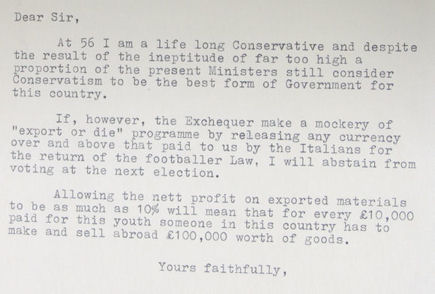 Another notable transfer was Jimmy Greaves on his move to Tottenham Hotspur from Milan in 1961 (see T 231/1365).

Fighting fans, the ‘Peril of the Pools’ and ticket touts

We also hold documents on English fans abroad, (see FCO 47/685). In 1974, Manchester United were to play a friendly in Belgium. A large group of fans travelled by ferry and, on realising that the Belgian drinking laws were slightly more relaxed than England, they headed for a bar. Six were charged with causing damage to cars and windows following a fight. This published letter (below) claims the Belgians should release them immediately and apologise for arresting them. A note at the bottom presumes a reply straightaway to this supposed MP?

Extract of a letter regarding the detainment of football fans in Belgium (catalogue ref: FCO 47/685)

The National Archives holds records from a number of sources on football matters. How about a little flutter? In 1936 the ‘Peril of the Pools’ was raised in a Cabinet meeting (CAB 24/261/20). In 1978, a report was written on the possible beneficaries from the proceeds of gambling (BS 3/163), although a further search identifies these as Scottish clubs.

The Customs Office’s suggestion when it came to ticket touts at Arsenal Football Club was to tax them: 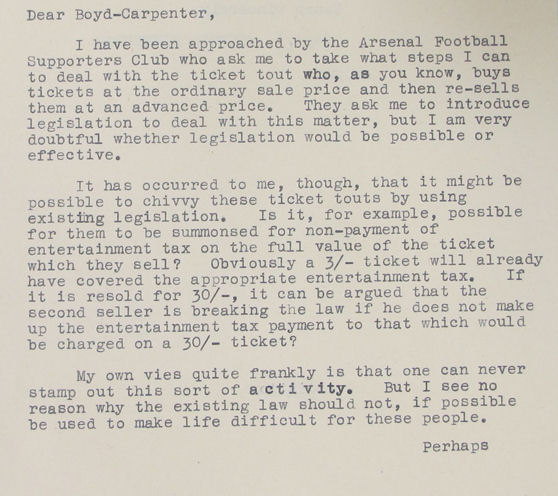 For those historians of our great game: which football club has changed grounds the most? A clue is found here in RAIL 252/1508. 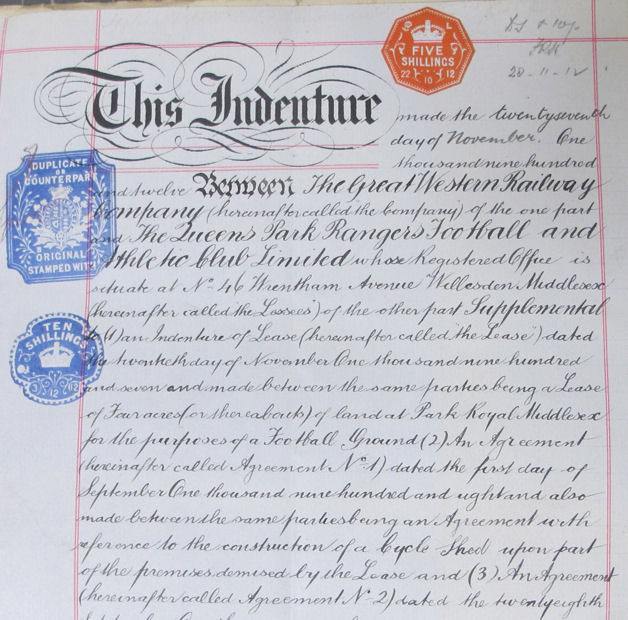 Answer: Queens Park Rangers, with 16 different grounds since their formation in 1882. 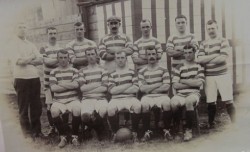 How better to finish than to remember England’s greatest ever footballing achievement?

Permission for use of Royal Arms by Football Association (catalogue ref: HO 290/37)