The theme of my next couple of blog posts will be about reconstructing the world we currently live in. Over the bank holiday weekend I attended an event that gave me new insight into a, for me, little-known digital world and gave me lots to think about in my work in digital preservation.

It has been 30 years since the release of the ZX Spectrum. To celebrate the impact this device has had on the UK in that time Imperica, the online magazine, held an event entitled Horizons. The theme, apart from reflecting on the ‘Spectrum at 30’, was very much binary, reflecting the past, and, exploring the future of computing. 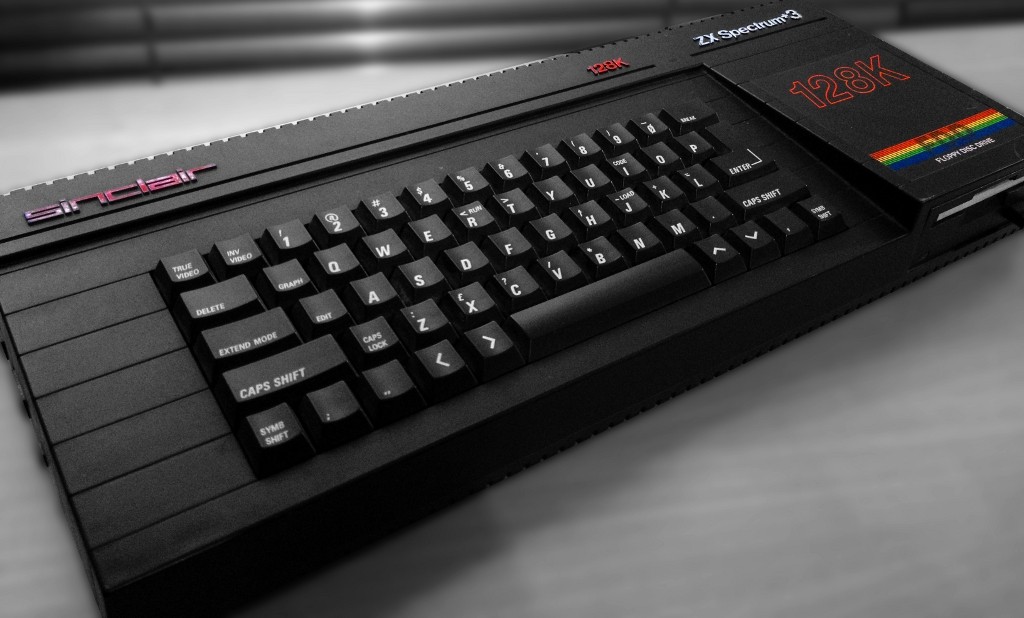 The past. My first computer, still alive and kicking today.

What I saw at the event ranged from the surreal and surprising to the completely inspiring – especially for a techie geek. The event was attended by enthusiasts, hobbyists, engineers, programmers and other specialists, all of whom either lived in a digital world 30 years ago that I was a little too young to know existed at the time, or were still keeping this world alive, still pushing the technological boundaries of the device even further.

We kicked off with an introduction from the organisers and a performance from the musician MJ Hibbett singing about how far 16k will get you nowadays and how programming is a poetry for our time. The real in-depth discussion about this digital history began with PJ Evans from Bletchley Park talking about what was for me an unknown history of British computing. He charted the work done with Colossus up to the computer game Jet Set Willy, showing us along the way how Lyons Cakes, of all organisations, played a major role in how computers would eventually shape business.

Intriguing presentations were given providing an insight into the life of Clive Sinclair and what it might be like to work with him by the director of Micro Men (Shaul Metzstein) and a former developer for Sinclair Research (Rupert Goodwins).

The temptation of the ZX Spectrum

For me though, the most thought-provoking talks came from those whose lives had been directly influenced by owning the ZX Spectrum. Alex May was the first up to talk about how he discovered he could make art using the device and how this has led him as an adult further into programming and developing digital art for a living. The musician Pixelh8 (aka Matthew Applegate) described how he didn’t have a brilliant school life but at one point, in swapping a Nintendo for the Spectrum, he found himself delving into the source code behind the games he was playing and was soon programming the computer to make music. This has led him into a career producing chip music, playing with other famous musicians, but also, now, helping to enrich other young people’s lives with computing, supporting a learning community and involving children in the work he does for his academic research.

Electronics engineer Chris Smith gave one of the deepest talks about the internal workings of the ZX Spectrum’s chip. His work on reverse engineering the Ferranti ULA (Uncommited Logic Array) provided some of the most relevant information to my work describing how ZX Spectrum emulators had failed to correctly implement the hardware, ironing out a bug in the original board that saw it generate uneven pixel widths. This would call into question a particular emulator’s suitability for use in emulation strategies within memory institutions.

The ZX and digital preservation

But, how exactly did the event as a whole relate to my work in digital preservation? A quote from Steven Goodwin’s talk describes a digital preservation problem most poignantly: ‘It’s not that no computer innovation took place in the 1980’s, just that none of it will be recorded.’ His talk described all the core principles of our work, centring on good documentation and metadata, and following good practices such as utilising lossless, open and stable formats.

Steven was concerned with preserving the history of home computing and what we saw throughout this event was that history – a digital life 30 years on. A digital life we might still want to understand, study, reflect on in 60, 90 or 120 years time. To achieve that, Steven and his colleagues are practicing digital preservation. Their techniques as well as our own will be vital to achieving the goal of keeping this significant ‘world’ alive.

Compared to our work the speakers and attendees of the event will in some way need to understand how to preserve a whole world. The output of Alex May’s or Pixelh8’s output relates to some of the records we may keep but also to software we’re not tasked with keeping. The work of Chris Smith and others at the event relates to emulation and hardware preservation that we don’t currently work with, in our department. The National Archives is concerned with preserving a large amount of history but only a subset of the history of UK public records from our government departments. The digital preservation techniques used, whether it is for the world of the ZX Spectrum or the Public Record, will nonetheless be complementary. I think there are some new things we can potentially use from Steven Goodwin’s example.

The past taken to the point where we now need to preserve it, the event took us to the future with Raspberry Pi. This device is an attempt to inspire children in the same way machines such as the ZX Spectrum did for the attendees of this bank holiday event. Raspberry Pi is a low cost, credit card sized computer that the creators hope will inspire a new generation of programmers, artists, engineers and anyone else who was affected by machines like the ZX Spectrum. It is hoped the initiative will be taken into schools where a new generation will be creating a new digital record. Writing code, developing software, maybe even designing new hardware – engineering a new digital world to push innovation further and then one day to reflect back upon it.

What I’ve taken away from these two days will contribute to my thinking for a good while. It was an exploration of something I will now seek to find out more about and I hope that, as well as giving you an insight into what your friendly neighbourhood digital preservation researcher gets up to during his time off, some of what I’ve looked at will intrigue you as much as it has me. I’ll be off to Bletchley Park to take a look around as soon as I next have some free time and I highly recommend you take a look around there too. From there? Maybe with Raspberry Pi you might start writing a bit of a future digital world yourself, and maybe we’ll reflect back on how that has impacted your lives as much as it has the attendees of this conference, ready to inspire yet another generation.

I am not a Spectrum enthusiast, although my first computer was a Spectrum ZX+3 and my family did eventually own and love an original 1982 model as well. My first programme was written on the +3 and the machine gave me many great hours of pleasure by gaming. The first PC that really changed my view of the world was probably a 386 we owned quite a few years later.

Chris Smith – reverse engineered a Z80 processor and built a ZX for a Master’s Thesis, documenting his work to help modern developers better use this old technology:  http://www.zxdesign.info/

Pixelh8 blog: Summary of his talk at Horizons