Many people will have been amazed at the depth of feeling generated on both sides of the recent court battle over the re-burial of the body of King Richard III. Before the archaeological dig began, the University of Leicester, which led the excavation of Greyfriars Church in 2012, was granted a licence by the Ministry of Justice which stated that if the remains of Richard III were found they were to be re-interred in Leicester Cathedral or another legal burial ground. However, in a case that has now been dismissed, the Plantagenet Alliance, a group of Richard’s distant relatives, challenged this decision; arguing that it was Richard’s desire to be buried in York.

Magnified line from C 1/206/69 ‘..where the bonys of kyng Richard the iijde resten…’ The key line in the case which shows that the site of Richard III’s burial was well-known in the East Midlands in the years immediately after his death.

The modern debate over the intentions of Richard III for his own memorial throws up some interesting questions about how centuries-old evidence can be valuable to very current issues. What evidence is there for Richard’s intentions for his own burial? What is known about his original tomb? To what extent has archival evidence been used to support modern legal arguments? How has this information been used to inform debate in print and online?

Richard’s personal preparation for his burial is not something that can not be known to researchers without an explicit statement in a will or other authenticated personal document – and no such record has come to light, so far. Much survives from Richard’s government, but virtually nothing exists of his private and personal archive as Duke of Gloucester or as King. Any modern researcher must therefore begin to sift evidence that is circumstantial, related, and informative but not specific to the subject of the king’s choice of his burial site and memorial.

However, evidence from the collections of The National Archives has been used to support the argument that it was the wish of Richard III to be buried in York. In particular, the Plantagenet Alliance has placed considerable emphasis on Richard’s intention to found a college of 100 priests at York Minster to pray for his soul. They emphasise that this suggests he was planning a magnificent royal mausoleum in the cathedral. The most detailed document relating to this endowment was a letter issued on 2 March 1485. It records Richard’s order to a number of church officials to find 100 priests ‘now being of our foundation within the said church’. For this he assigned profits from parts of the main northern estates of his Duchy of Lancaster; including Bolingbroke (Lincolnshire), Pontefract, Knaresborough, Pickering and Tickhill (Yorkshire), and Lonsdale (Lancashire). As patron, he was ‘not willing to have priests unpaid of their wages seeing that by their prayers we trust to be made more acceptable to god and his saints’ (DL 42/20, f.70).

Duchy of Lancaster, enrolment book, Richard III. The crown’s copy of the letter sent under the king’s privy seal to his chief officer at Bolingbroke in Lincolnshire. A separate sheet (not copied into the register) listed which income was to be assigned to fund one hundred priests at York. Dated 2 March 1485. (DL 42/20, fol 70r)

It was certainly a formidable and ambitious enterprise. The licence to the dean of York to fund the priests has been well-known to historians for over thirty years. The grant is mentioned five times in the published edition of Richard III’s book of signet seal letters (British Library Harleian Manuscript 433). These entries show that the king intended the priests to sing in worship of God, the Virgin Mary, St George and St Ninian. The inclusion of the Northumbrian St Ninian has previously been seen as evidence of Richard’s strong relationship with the north. The additional details from the Duchy of Lancaster grant book add a new dimension to this connection, but the entries say nothing directly about Richard’s intention to be buried at York. 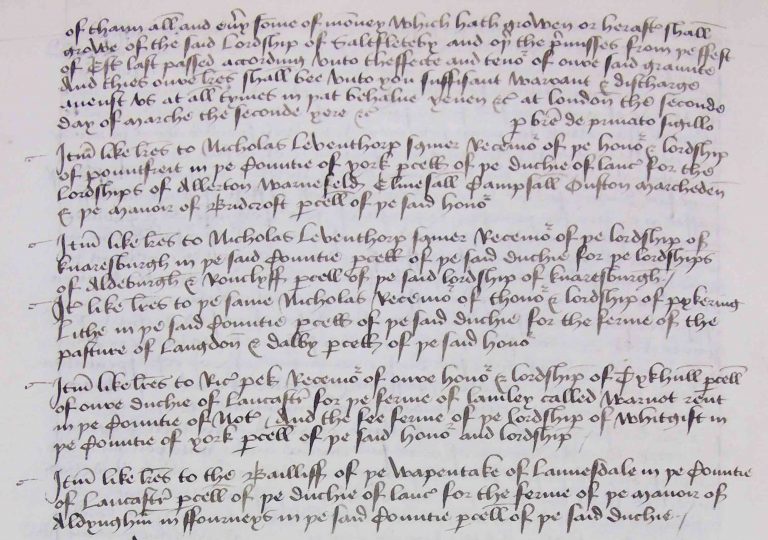 The second page of the enrolment. It names the officers in various other northern duchy lordships and the manors and income to be assigned to pay for the livings of the priests at York Minster. (DL 42/20, fol 70v)

Regardless of whether or not Richard did wish to be laid to rest in York Minster, the circumstances of his death created the reality of Richard’s original burial at Leicester. This evidence was used to argue that he should be re-interred in the city – something which fits with archaeological protocol requiring the re-burial of exhumed human remains in the closest consecrated ground to the site where they were found. Yet even at the time this was not without controversy. A brief survey of the histories of his reign reveals that the treatment of Richard’s body was a cause for comment almost from the moment of his death. After the Battle of Bosworth on 22 August 1485, Richard’s mutilated corpse was brought to Leicester slumped over the back of a horse and displayed in the city for two days. One of the first charges levelled against Henry VII by some of Richard’s modern supporters is that once this public demonstration of the death of his rival was finished, Henry ensured that Richard’s body was quickly and unceremoniously buried in a crude grave with no suitable memorial.

However, it is clear from further documentation in The National Archives that even if the burial itself was a quiet affair, Henry VII did commission a formal tomb to mark his predecessor’s resting place. It seems appropriate in light of current events that the construction of this tomb also brought about a legal dispute. In a complaint submitted to the Court of Chancery by Rauff Hill of Nottingham, it is recorded that ‘Walter Hylton, alabasterman […] committed and bargeyned with the right honourable Sir Reynold Bray and Sir Thomas Lovell, knight, to make and cause to be made a Tombe within the Church in Newark of frers In the Towen of Leycestre where the bonys of kyng Richard the iii(de) resten’. For this task, Walter received payment of £20 (C 1/206/69).

Chancery bill of complaint from Ralph Hill of Nottingham. He alleged that Walter Hylton had fraudulently inserted Hill’s name into the indenture and obligations for the construction of King Richard III’s tomb at Leicester. When Hill unknowingly defaulted on the agreements he became liable to powerful counsellors of the new king, Henry VII, for the resulting debts (which he was unable to pay); c. July 1496. (C 1/206/69)

The cost of £20 for the preparation of an alabaster memorial might seem insignificant when compared to the £433 6s 8d initially spent by Henry on the burial of his queen, Elizabeth, in February and March 1503 (which had risen to almost £2400 by May). 1 However much Henry might have wished to obliterate Richard III’s memory as a focus for discontent against his own kingship, Richard had always been acknowledged as a ‘king in fact but not by right’ after the Tudor accession. As an anointed ruler and uncle of the first Tudor queen, Richard’s burial place deserved some recognition. This was certainly nothing like the edifice that might have been constructed had Richard died in his bed, but Henry VII could not ignore his rival, even in death. Moreover, because this case came into court on 1 July 1496 it has been presumed that the dispute was directly related to the creation of the tomb.

But there is nothing to suggest that Henry did not commission the tomb early in his reign and that the construction was perhaps held up for a decade by legal wrangling. Had Henry VII delayed the order to construct Richard’s tomb for several years after Bosworth it is difficult to understand why he would have started the project in 1495-6. Although Richard’s short reign has been examined in minute detail, the current attention given to documents relating to his burial and memorial indicates that those who can read and interpret the historical evidence can begin to dominate  the discussion of the presentation of the past. It is also true that with figures such as Richard III, only archival collections are likely to continue to yield the kind of information that can challenge long-accepted historical facts or provide new interpretations to change enduring myths.

Historical evidence and thus the interpretation of history cannot be kept churning without continuing archival research and maintenance of the skills needed to recognise the importance of evidence found when rolls, boxes and bundles of paper and parchment are opened. Regardless of how this evidence is then presented, the historical debate can only progress if new evidence is brought to light. Digging around in the archives for documents related to Richard III’s burial might also demonstrate the value of a fresh look at evidence surviving for other historical controversies.