Did you have a good day? I thought not. There are those days when I come home totally shattered. Then I can only assume that my previous life was one of untrammelled hedonism, reclining on soft pillows made from the hides of endangered species whilst sipping stolen champagne from jewel-encrusted chalices. I sure as hell am paying now, I only wish I could remember more of it… Anyway, home now and a little treat is required. But stay that hand as it reaches towards the wine bottle – there is a literary option, much kinder to the liver and less likely to impact on the next day at the cliff face (which sadly will dawn). I will escape into a book.

Last week on Radio 4 (I know – blame my age, my education and an inability to work the dials on the radio) Terry Waite was saying how one of the things that helped him through his incarceration in Lebanon was the ability to escape in his head via a mental bookbank of great literature. He didn’t have a book to hand, but he had in his memory the poems and passages he had memorised throughout his lifetime (consciously and unconsciously) and on which he could draw. The mental exercise of remembrance and the pleasure of the words helped immensely in taking him to another far more pleasant place than the one in which he found himself. He chose reading to escape.

Now I am not suggesting that a hard day at the office is in any way comparable to Waite’s ordeal, but we all have times when a little deathless prose can help take your mind off the trials of daily life. Although I did not come from the age of recitation when the education system, enforced by a strong hand and an inch-thick cane, ensured every young pup could stand up and recite ‘The Boy Stood on The Burning Deck’, there is lots that has stuck. Whilst my own memory bank is not precisely equal to the Oxford Anthology of Verse I have snippets, they come to the fore as required and they do help.

If you are seeking to top up your own personal bookbank there are a few excellent anthologies around at the moment. In our shop, sandbagged as we are by outpourings from the Fist World War, we have some great collections of war poets. The mud, the loss of life and the whole unremitting tragedy of the First World War resulted in some of the greatest poetry ever.

The Imperial War Museum’s collection Poems From the First World War is a good work-a-day collection with all the classics and a lovely cover with embossing and poppies. Some Corner of A Foreign Field by James Bentley is my personal favourite at the moment. It’s small (and thus easily portable for those crises that arise on the move) has a great selection and each poem is accompanied by a colour reproduction of a war artist. The pictures as poignant and evocative as the words. 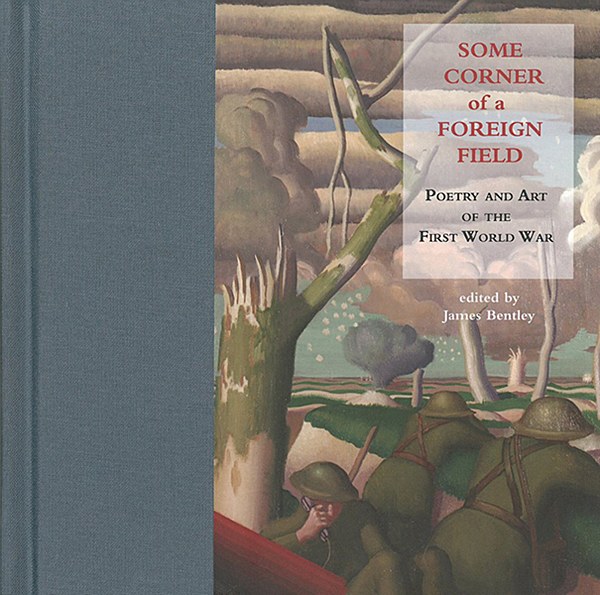 Some corner of a foreign field, edited by James Bentley

And what could be the best yet, Jane McMorland Hunter’s First World War Poems, is due any day now. It is arranged by theme (animals, family, dashing aviators) which means you can instantly find the mot juste to ease any dilemma, and this too is illustrated with paintings and posters from the period. And I know I say this a lot but these are BOOKS: don’t even think of downloading to your Kindle. Illustrated books are such beautiful things to have and hold. You can pick them up to dip in and admire. Buy one as a personal treat or a present for a special friend.

Put things in perspective with a look at the world through other people’s eyes. Read Six Weeks by John Lewis-Stempel, an examination of the lives of the young officers of the First World War. Subalterns went straight from school to the front. They were ideal officer material. The British public school system had its failings, but it excelled at churning out patriotic, team players with a strong sense of duty and a tolerance for poor living conditions and atrocious food. These were boys, 17 to 19 years old with a  life expectancy of six weeks, and so many of them stepped up the plate and delivered in a way it is difficult to conceive of today. They were also staggeringly literate, to read their letters and diaries will make you weep. Some of the anecdotes are amazingly funny, the situation is heart-rending.

Or see if someone else’s life is better or even just different. In Vera Brittain’s Testament of Youth she tells the story of her generation, their hopes and dreams and the huge hole ripped in those dreams by a war which took so many of the best and brightest and forever scarred those left behind. Her story goes on past the end of the war and into the twenties, exploring how the survivors tried to cope. It gives an explanation to the fast bright hard pleasure-seeking of the flappers, born from a desperate need to claw back just some of the youth which had been stolen from them.

Stories have always had the power to transport and transform. As Scheherazade discovered they can be life-saving. George MacDonald Fraser’s Flashman novels will tickle you out of the doldrums. Flashman (of Tom Brown’s Schooldays fame) is all grown up. His memoirs are outstanding, both hilariously funny and historically accurate. Flashman at the Charge sees our caddish but engaging hero with the Light Brigade at Balaclava. Read it, you may learn something you didn’t know about the Crimea, and you will certainly laugh till you cry.

So next time you are feeling low look to your bookshelf to help you escape.