To mark National Libraries Day on Saturday 6 February 2016, I led a ‘Hands on History’ workshop on a selection of rare books from The National Archives’ Library collection.

Alongside our rich archival holdings, we have a wonderful research library that is accessible to all. It contains thousands of printed and online sources that complement and support research into the archives. It is a specialist, research-level library, distinctive because it is a library collection within an archive. Unlike similar libraries, the majority of the collection is open-access and can be browsed.

The library collection includes printed materials published from the 16th century onwards. We have about 3000 books published before 1800, which now form the rare books collection. This blog highlights four of the books selected for the workshop, and the stories connected with them.

I am interested in the former ownership – or provenance – of books in the library. Clues to this can sometimes be found such as bookplates, signatures and inscriptions, stamps and other marks of former owners.

The following book was printed for Henry Twyford in 1682:

‘The Office of the clerk of assize : containing the form and method of the proceedings at the assizes and general gaol-delivery as also on the crown and nisi prius side: together with The Office of the clerk of the peace: shewing the true manner and form of the proceedings at the Court of General Quarter-Sessions of the Peace: with divers forms of presentments and other precedents at assizes and sessions: with a table of fees thereunto belonging’ (Library Rare Books 99)

Earlier editions had appeared in 1660 and 1676. The National Archives holds Assize Court records from 1559 so the subject matter has direct relevance to the records. 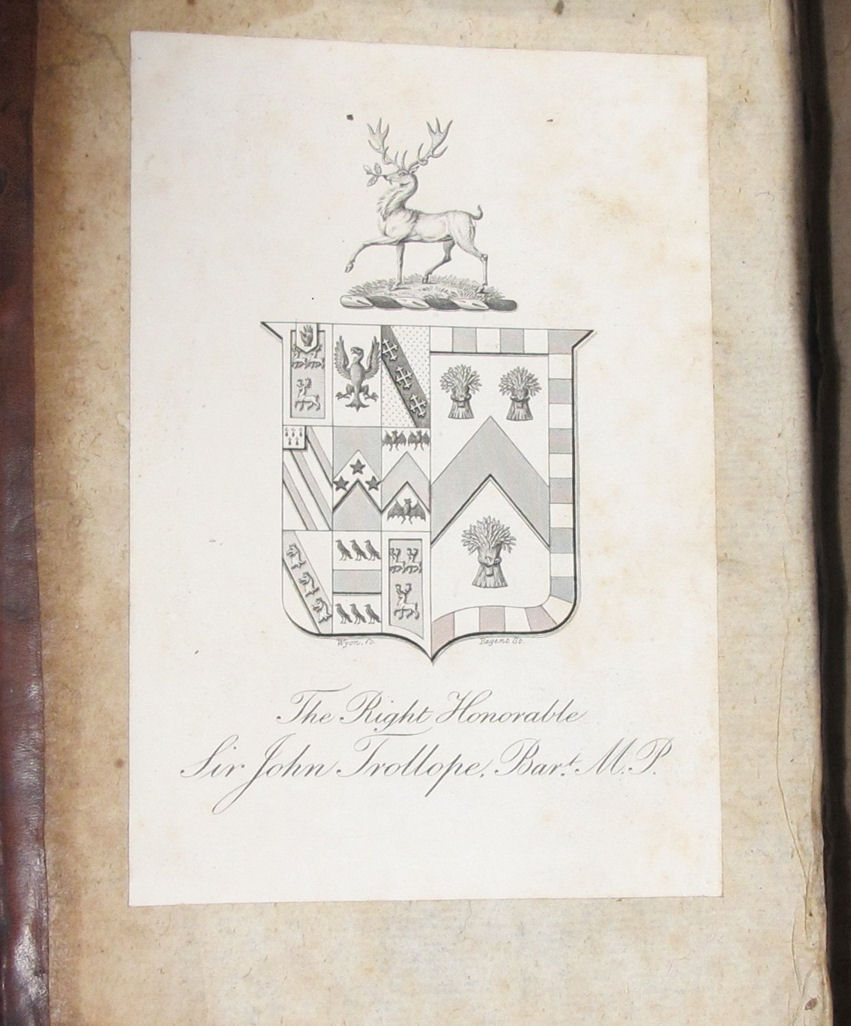 A search on Discovery on the name Sir John Trollope finds records both here and in other archives including Lincolnshire. Some of these are signed by John Trollope (see MH 12/16249/221).

We do not know how the book found its way to the Public Record Office (later National Archives) Library, but the link with the Poor Law Board may be a clue. I would like to find out if we have other books from Sir John Trollope’s library and how they were acquired.

Another example of a book with provenance connected to the records held here is Thomas Sprat’s ‘A true account and declaration of the horrid conspiracy against the late King, his present Majesty and the government’ printed by Thomas Newcomb in 1685 (Library Rare Books 941.066 SPR*).

Thomas Sprat (1635-1713) was Bishop of Rochester from 1684 to 1713. He is known particularly for his history of the Royal Society published in 1667. King Charles II commissioned him to recount the events of what later became known as the Rye House plot, a plot to assassinate Charles and his brother James in 1683. The account, based on documentary evidence, was published in 1685 as “A true account and declaration of the horrid conspiracy against the late King…”. 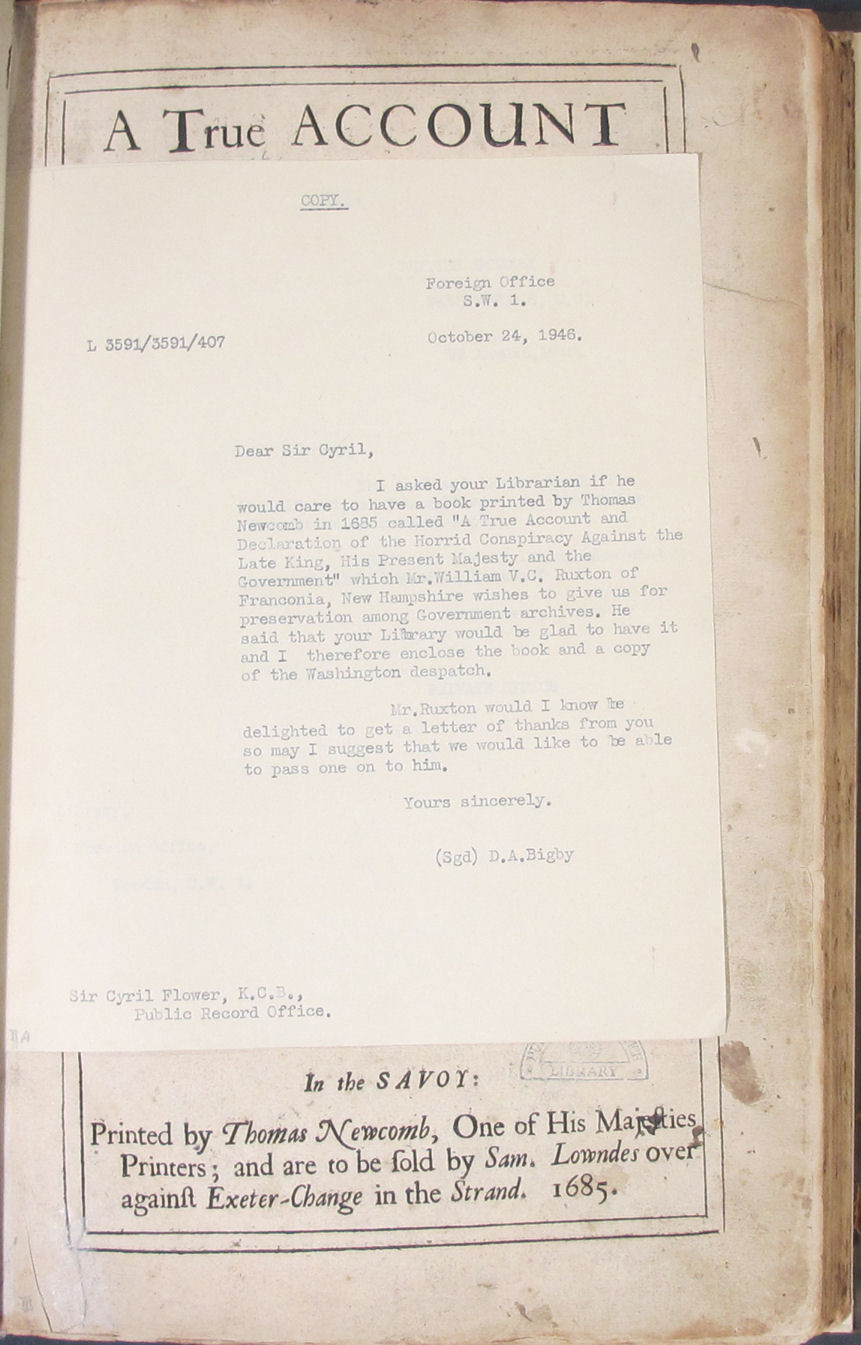 The National Archives’ copy of the book contains evidence of its previous owners, including copies of four letters concerning the book from 1946.

William V. C. Ruxton of Franconia, New Hampshire, USA offered his book to the British government via the British Ambassador, Lord Inverchapel, in Washington DC. There is a copy of the offer from William Ruxton, the Ambassador’s acknowledgement and a copy of a letter from the Ambassador seeking advice from the Foreign Office Library.

The fourth letter, dated 24 October 1946, is addressed to Sir Cyril Flower, Deputy Keeper of the Public Record Office from 1938-1947. It is from Dorothy Bigby, Acting Librarian in the Foreign Office from 1945-46. 1 She wrote:

‘Dear Sir Cyril, I asked your Librarian if he would care to have a book printed by Thomas Newcomb in 1685… which Mr William V C Ruxton of Franconia New Hampshire wishes to give us for preservation among Government archives. He said that your Library would be glad to have it and I therefore enclose the book and a copy of the Washington despatch.’

This final letter is listed in the Index to Foreign Office Correspondence, under the name Ruxton, with the reference L 3591/3591/407, which is typed on the letter. 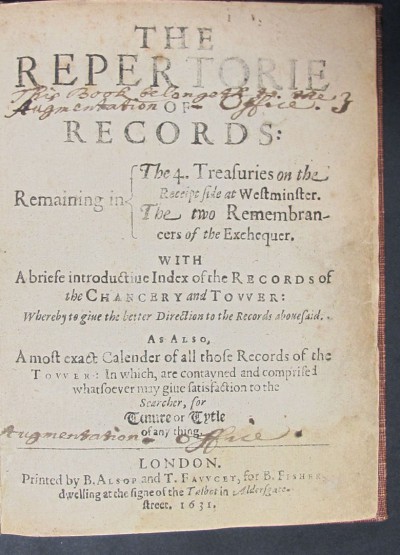 Title-page of The repertorie of records (Library Rare Books 352.409 POW)

‘The repertorie of records : remaining in the 4 Treasuries on the receipt side at Westminster, the two Remembrancers of the Exchequer : with a briefe introductive index of the records of the Chancery and Tower…’ by Arthur Agard (1540-1615) and Thomas Powell (1572?-1635) was edited by Powell from Agard’s papers after the latter’s death and published in 1631 (Library Rare Books: 352.409 POW).

Arthur Agard was Deputy Chamberlain of the Exchequer from 1570 to 1615. He was an important figure in early record keeping, interested not only in the contents of the records, but in their safe-keeping. He made inventories and abstracts of them. 2

‘The repertorie of records’ is an example of an early calendar of documents. It describes the contents of various record repositories including Chancery, the Tower of London and the Exchequer. It includes fees for searching and copying the records. On page 132, Agard’s concern for the preservation of the records is demonstrated by these comments:

‘In searching the Booke of Domesday, is to bee avoyded, laying bare hands or moysture, upon the writing thereof, and blotting.’

Agard is buried in Westminster Abbey. The latin inscription on his memorial translates as:

‘Here lie, in hope of resurrection, Arthur Agard, who spent forty two years diligently researching the royal and ancient records which are preserved near to this spot, and Margaret his wife…’

There is some provenance information on The National Archives’ copy of this book. A manuscript note on the title-page states that ‘This book belongs to the Augmentation Office’. The Court of Augmentations was formed following the dissolution of the monasteries between 1536 and 1540, to administer the land and revenue confiscated by the Crown. It was incorporated into the Exchequer in 1554 as the Augmentation Office and was one of the numerous repositories of records that existed prior to the formation of the Public Record Office in 1838.

The final book in this selection is by Sir Julius Caesar (1558-1636). Caesar worked in various different courts or branches of government during his lifetime, including the High Court of Admirality and Chancery; he was Chancellor of the Exchequer and Master of the Rolls.

The National Archives’ research guide on the Court of Requests Records 1485-1642 describes it as ‘an offshoot of the King’s Council, intended to provide easy access for poor men and women to Royal justice and equity’. 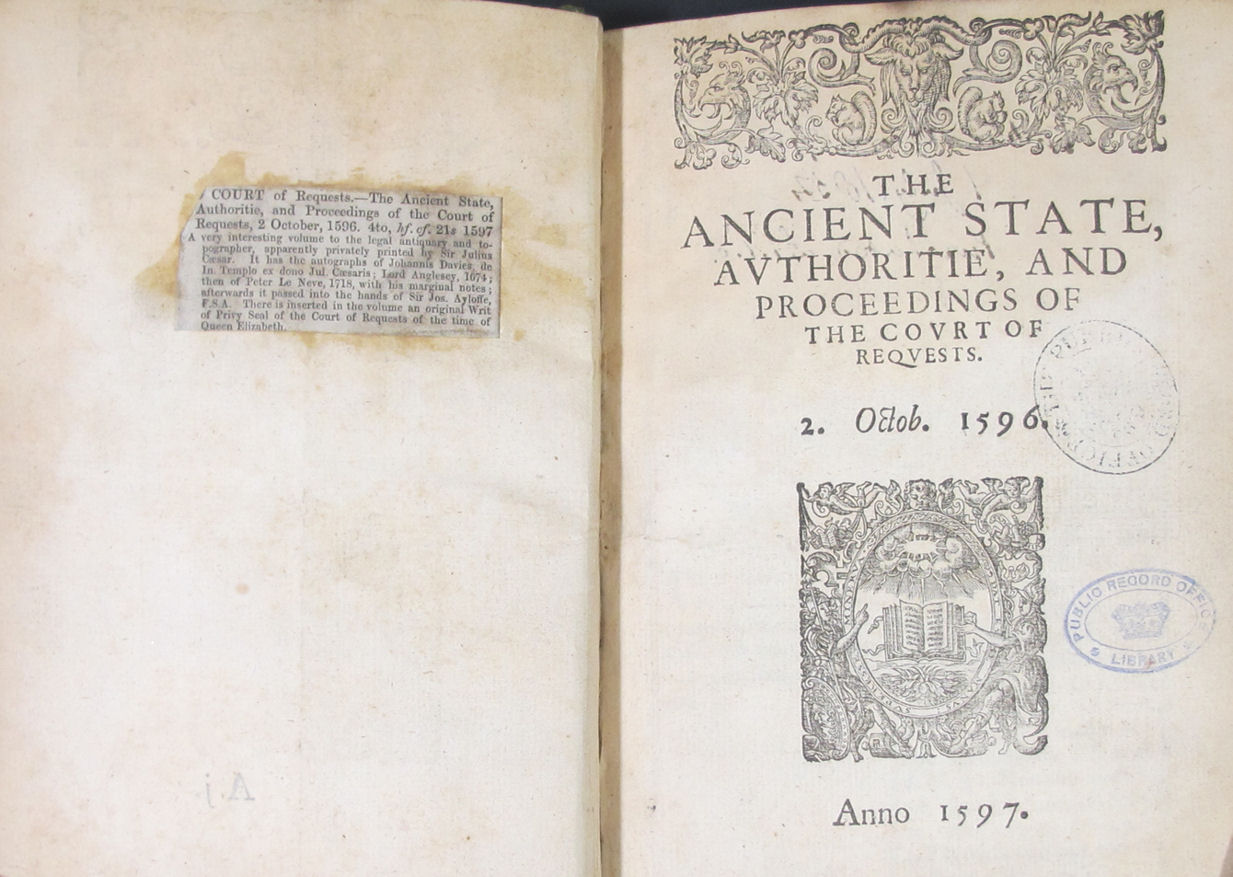 The Library’s copy of the book has an impressive provenance. There is a bookseller’s catalogue entry pasted on to the page opposite the title-page:

‘A very interesting volume to the legal antiquary and topographer, apparently privately printed by Sir Julius Caesar. It has the autographs of Johannis Davies, de In. Templo ex dono Jul. Caesaris; Lord Anglesey, 1674; then of Peter Le Neve, 1718, with his marginal notes; afterwards it passed into the hands of Sir Jos. Ayloffe, F.S.A. There is inserted in the volume an original Writ of Privy Seal of the Court of Requests of the time of Queen Elizabeth.’

There is also a manuscript note on the reverse of the title-page which states ‘Public Record Office 1 July 1854 Purchased £1.1.0’.

The autographs referred to above can be found on one of the endpapers at the back of the book, along with the Writ of Privy Seal. All the former owners mentioned had an interest in antiquarianism and we have some other works in the Library by Le Neve and Ayloffe.

Sir John Davies (1569-1626), a lawyer and Solicitor-general for Ireland, was a poet and an antiquary. Along with Arthur Agard, Sir Robert Cotton, William Camden and others, he was involved in re-establishing the Society of Antiquaries.

Arthur Annesley, Earl of Anglesey (1614-1686) had one of the largest private libraries of the time, thought to have been used by Andrew Marvell. The Earl was implicated in the Rye House Plot, mentioned above in Thomas Sprat’s account of the conspiracy. He died in 1686 and his library was then sold.

Peter Le Neve (1661-1729) was a herald and antiquary and first President of the re-founded Society of Antiquaries. He was also a deputy chamberlain of the Exchequer.

Sir Joseph Ayloffe (1709- 1781), also an antiquarian, was a Fellow of the Royal Society and the Society of Antiquaries. In 1736 he was appointed clerk to the commissioners for building Westminster Bridge, which he did until the bridge was completed in 1750. In 1764 he was appointed a Commissioner in the State Paper Office.

All their wills, including Sir Julius Caesar’s, can be found in the PROB 11 series of Prerogative Court of Canterbury wills up to 1858. Further information about all the characters mentioned here can be found in the Dictionary of National Biography, available online at The National Archives. 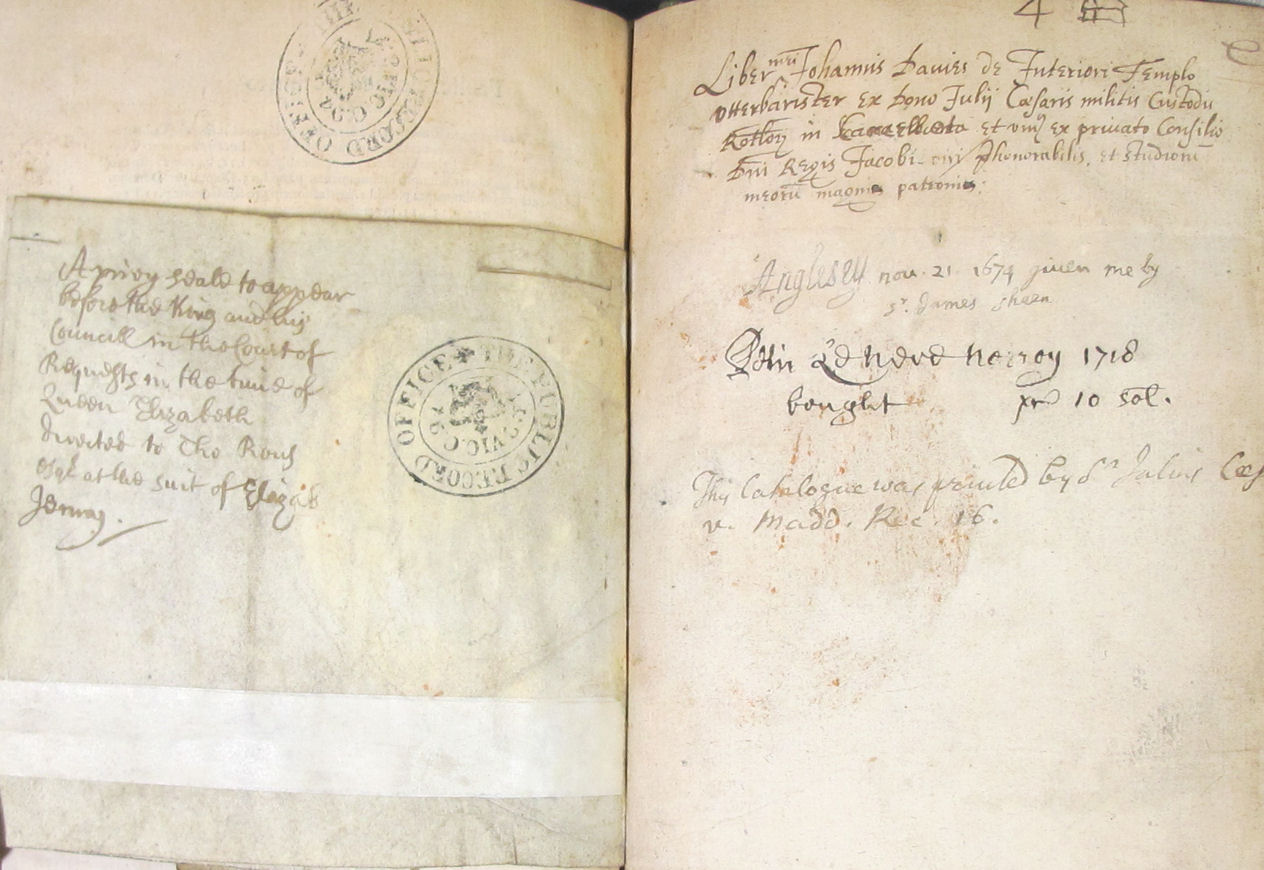 The books described in this blog illustrate the many connections between the records now held by The National Archives, the government offices they came from and the individuals who cared for them or used them for their research. I hope to unearth more such examples with further research in the Library’s rare books collection.