Indian Philosopher Swami Sivananda once said: A mountain is composed of tiny grains of earth. The ocean is made up of tiny drops of water. Even so, life is but an endless series of little details, actions, speeches, and thoughts. And the consequences, whether good or bad, of even the least of them are far-reaching.

This blog is dedicated to Emma Haden, about whom I know very little. But I do know that her life changed terribly on 25 July 1903 when a farmer lost his temper, and she lost her husband.

When looking though old documents it is easy to forget that every name we come across was a real person, with family members, feelings, ideas and lives to lead. In the excitement of building your family tree it is so easy to turn the page, or click the mouse, and miss a story. We move on, looking for the next relative, collecting names without stopping to consider each person’s circumstances, their world, how they lived and the people around them.

Emma Haden lived in Audley Road, Alsager in Cheshire, near Stoke on Trent. She was 42 years old in 1903 and she lived with her husband of 17 years Charles Henry Haden, and their five children. Charles worked for the North Staffordshire Railway Company as an engine driver. It is likely that he had served a number of years with them, working his way up from cleaner to fireman, and finally to engine driver.

25 July had been a normal working day for him. At 19:15 he brought his goods train to rest at Chatterley, about three miles from Alsager, leaving the rear part of the train across an ‘occupation crossing’ on some farmland. This may not have been the first time that this had happened because the farmer was not pleased that access to part of his land was blocked, and he made his way down to remonstrate with the railwaymen. 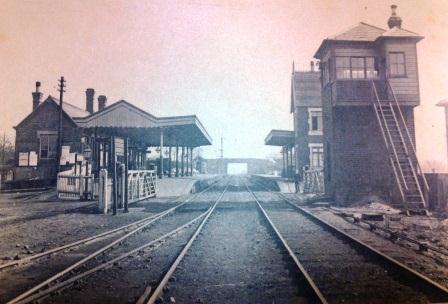 The Railway Department sub-inspector’s report to the Board of Trade regarding this incident (RAIL 1053/92/479) states that the farmer walked down into the yard in a threatening manner, and actually took hold of Yard Foreman Thomas Hemming.

Charles, who was standing on the footplate of his engine, saw what was happening and immediately ran to help his colleague. At this point the farmer took off his coat and challenged Charles to a fight, and started throwing punches. Charles fought back and several blows were exchanged before Charles ran back to his engine. The farmer climbed over the fence into his own field, from where, standing on an embankment, he proceeded to throw stones at the men in the yard. Charles needed to move his engine out of the siding, so he instructed his fireman to move the train forward. He rode on the engine step on the opposite side to that from which the stones were coming, using the engine as a shield.

As he rode on the side of the engine, trying to protect himself from the stones, he failed to notice a wagon standing in the adjacent siding. As his engine moved forward he was crushed between it and the wagon. He was so badly injured that he died shortly afterwards. 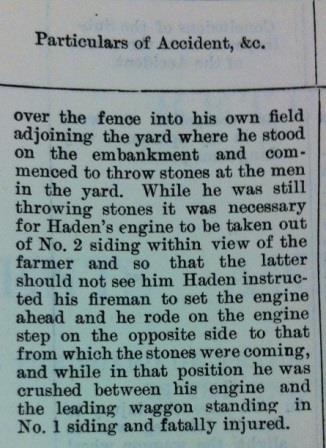 This ‘accident’ is included in the Board of Trade Sub-Inspector’s Accident Reports, which are now searchable on Discovery, our catalogue for the period 1900-1910, following a cataloguing project overseen by myself, with the help of many members of the Advice and Records Knowledge Department. The sub-inspectors reported on the smaller injuries to individual people rather than the large scale train crashes covered by the higher ranking inspecting officers. The reports can include such minor accidents as railwaymen tripping over points levers, or catching their thumbs between two buffers. But they also include men being killed, or sustaining major injuries such as losing limbs when falling under moving wagons. Many of the accidents result in fatalities, and the men involved can be as young as 15 – young boys employed as Assistant Horse Lads, for example. Each report is a detailed snapshot of an incident in an ordinary working man’s life.

The report on this particular incident blamed Thomas Hemming, the Yardman, for leaving the wagon against which Charles was crushed too close to a ‘fouling point’ – a place where vehicles can collide if left too close to a junction.

The farmer who lost his temper is not named in the report, and neither is Charles’ wife Emma, who was probably at home with the children that summer Saturday evening, when she lost her husband because someone threw some stones three miles from her house.