The question of pensions for venereal disease

Due to the rate of venereal disease (VD) in the armed forces during the First World War, there some dismay regarding the demobilisation, or discharge, of men. How could it be ensured that they were not suffering from VD in a communicable form?

A medical examination could give some degree of an answer, but the most stringent means of detection was the Wassermann test (an antibody test for syphilis). However, with the large numbers of men to deal with, this was not deemed practicable. Everything depends on numbers: too many men, requiring the help of even more bacteriologists; if they wanted to keep the men until they were cured, then a large amount of hospital accommodation would be needed. In April 1918, the War Office stated that:

‘The Officer i/c the hospital, or the Senior Medical Officer of the discharge centre… will confidently inform the MO of Health of the County or County Borough in which the man intends to reside that the soldier is suffering from VD, in order that suitable arrangements may be made for the man’s treatment on his return to civil life.’

There was also fear with regards to men who had been discharged and were suffering from VD and the potential result this could have upon their wives, or upon the women they might marry in the future.

The idea of a medical certificate stating that a man was suffering from VD was discussed. This would have the apparently positive effects of giving the knowledge to anyone who needed to know it. It was also believed that it might have a wholesome effect on men when they were in the presence of temptation.

Letter relating to the question of discharging men with communicable forms of VD (catalogue reference: WO 32/11402)

But what of the men who suffered more from their contraction of venereal disease? What of those who could no longer serve, or work? Whose syphilis had caused other issues to develop, for example?

There are a few cases within our Ministry of Pensions records which appear on Discovery when you search for ‘syphilis’ or ‘gonorrhoea’ within. The majority of these have larger issues, with the venereal disease just being part of what they had suffered from at some point. For example, one man is suffering from ‘neurasthenia and syphilis’, while another suffers from ‘cerebro spinal syphilis’. But what was to be done with these men with regards to income, for themselves and for dependants? 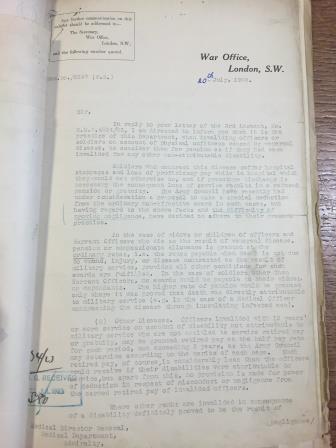 Letter regarding pensions for those with VD (catalogue reference: ADM 178/51)

Again, there is discussion of this topic within our records. A lot of this surrounds whether or not it could be said that the contracting of VD was through no fault of the man, and if the symptoms could be identified as being aggravated by their war service.

In 1923, a letter from the War Office stated that:

‘it is the practice of this Department, when invaliding officers or soldiers on account of physical unfitness caused by venereal disease, to consider them for pension as if they had been invalided for any other non-attributable disability.’

PIN 15/368 is a very worthwhile file to look at if you are researching the decisions made relating to pensions and VD. This shows some of the discourse that was happening in the lead up to the decision made in 1923.

Previously, it had been the practice in the case of gratuities formerly awarded in non-attributable cases to make a reduction in the pensions award if the invaliding was due to VD. The reduction was 25% for gratuities of £4 and over, and 10% for gratuities of £2-£3. No reduction would be made if the gratuity was of the minimum award (£1 for 1 years service).

Awards were restricted for men who were discharged for disabilities not contracted ‘from want of proper care’ on the part of the man – a strict interpretation of which could easily put VD into this category. However, by 1917, it was being discussed that awards should be given to attributable (to war service) and non-attributable invaliding cases, as long as the disabilities were not due to ‘serious negligence of misconduct’. In this case, the term was not to be interpreted to mean that those suffering from VD should be barred.

There are some excellent tables within the file, which try to break down the entitlement rules which were being proposed in the early 1920s. The table below shows some of the discussion relating to the various categories and whether or not it was believed that a full pension, or a reduced pension, or any pension at all, should be awarded to men in those positions. 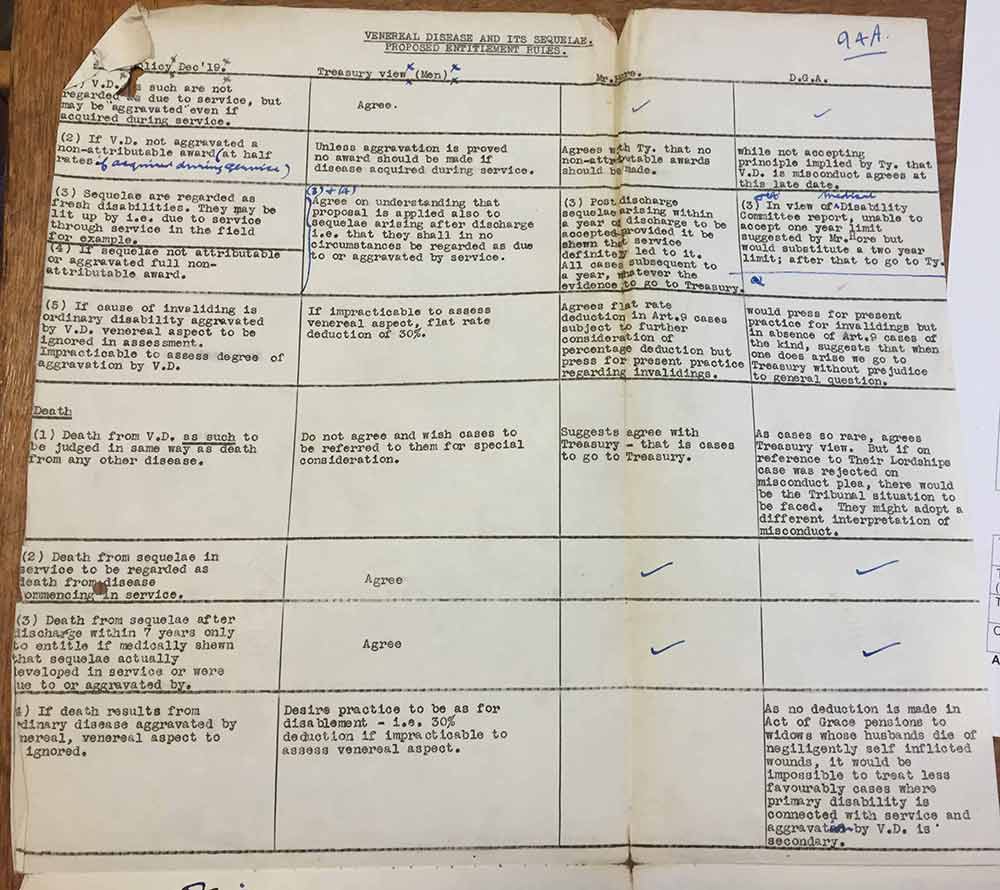 The same file also hold some really interesting examples of men who were being awarded pensions for VD, or a consequence of having caught VD. It breaks down how the rate of pension was calculated, and gives some insight into the decisions that had to be made by officials.

For example, the page below focuses on William. The breakdown of the money awarded to him shows that he had three children, and that some money had to be put towards their upbringing, as they were his dependants. Likewise, if William had died and left behind his wife and children, some money would also be afforded to them. 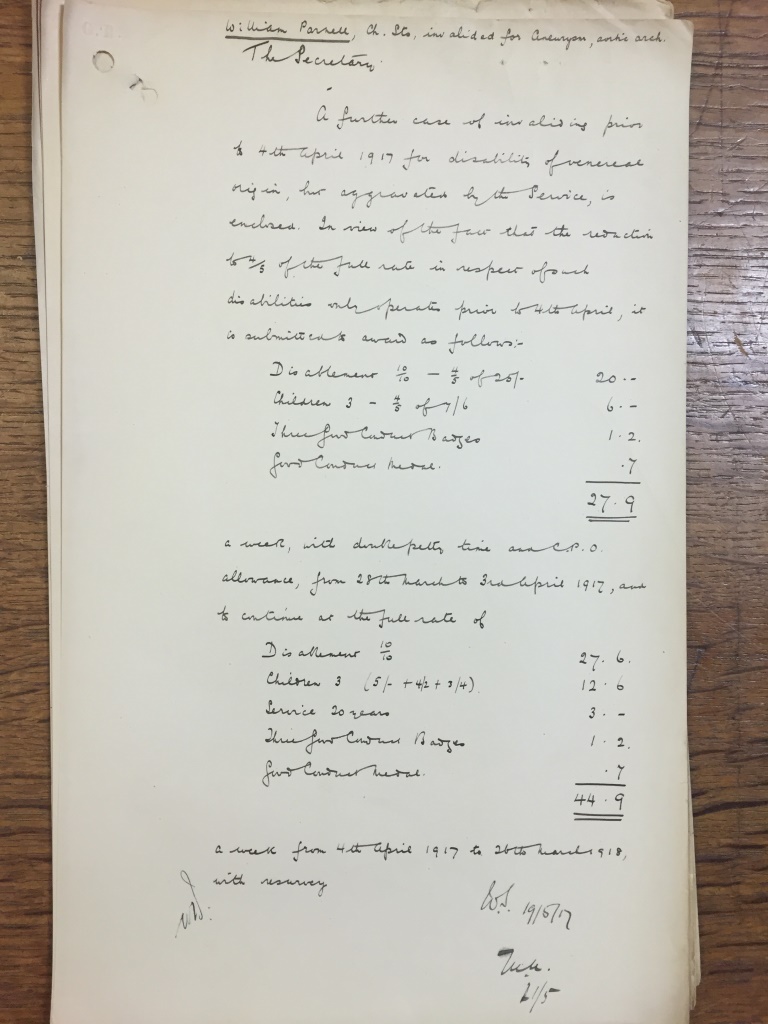 Letter regarding the pension for William P (catalogue reference: PIN 15/368)

As this is the last blog in our series about venereal disease, it seems apt to give some tips if you would like to conduct further research into this topic yourself: