On 24 of May 1917, the Venereal Disease Act 1917 was enacted. This was ‘An Act to prevent the treatment of Venereal Disease otherwise than by duly qualified medical Practitioners, and to control the supply of Remedies therefor; and for other matters connected therewith.’

Essentially, it was to make sure that those suffering from venereal disease (VD) went to an actual doctor, and not so-called quacks – getting treatment which might actually be of medical value.

We hold a file which relates to the first case in the Metropolitan Police District under the Act, dating from February 1918 (MEPO 3/256). The statements within the file are fascinating, as they offer witness statements from the man suffering from VD, his wife, the inspector who deals with the case, and the qualified doctor who eventually helps the man in question.

The case of Mr Kontides

The story runs as follows: The aforementioned gentleman (Mr Kontides) complained to his wife (Mrs Kontides) that he was feeling unwell and that his penis was very sore, probably from having scratched himself. She suggested they go to the doctor, but he insisted that he knows a place where such an ailment could be cured. The most importance factor here is that he insisted they not go to the doctor, and instead visit a chemist’s shop.

Inside, the woman behind the counter (Miss Bunin) informed them that her partner in the business (Mr Raymond) would be down shortly. Raymond took Kontides upstairs and examined him, before declaring that ‘he is sick through going with a girl’. Mrs Kontides asked if there is some medicine which Raymond could give her husband, if he thought it would cure him.

Raymond’s response of ‘It is not a hospital case and I can cure him myself’ is important. Raymond does not appear to be a qualified medical practitioner, and although he works in a chemist’s shop there could be some question around the so-called cure that he provided. It is later stated that Raymond is in fact only an assistant in the chemist’s. It is intriguing that when selling them the medicine, he makes sure that they understand that:

Kontides was also given a box of powder, a bandage, boracic acid and lint (which could be used for powdering and washing the affected parts). For all of this he was charged 10/6. On leaving, Raymond reiterated that he had cured plenty of people who had been ill through girls, and seems confident that he can cure Mr Kontides, but obviously it will take time and cost money. In her statement, Mrs Kontides states that as her and her husband were leaving the shop, Raymond uttered:

‘If you go to a Doctor don’t tell him that you have had my treatment or any thing about it because I did not really ought to attend to such cases, as they should be treated at Hospital.’

Kontides took some of the medication and soon became worse; his wife ran to get the local doctor who declared him to be in a ‘very bad state indeed.’ It was the doctor who notified the authorities of what had occurred.

The prosecution against Raymond was successful. This was the first case in the District, so they did not sentence him to serve prison time; instead they fined him £25, and £2 2 shillings costs. It was hoped that this would act as a deterrent for all those in the future considering breaking the terms of the Act.

The case against Miss Bunin was dismissed – the only evidence against her was that she had allowed bottles of medicine to be sold from her establishment, without knowing the exact use for them.

The wording of the Act came under great scrutiny while the Bill was being drafted. There were concerns raised that it would be easy for an unqualified practitioner to state that they did not realise they were treating a case of venereal disease, or that what they prescribed was not actually for the treatment of VD, in order to save themselves from potential prosecution.

Arthur Newsholme, a leading public health expert at the time, argued in October 1916 that the prohibition should be against ‘any person suffering from or who can be reasonably suspected by him to be suffering from syphilis, gonorrhoea, or soft chancre, or other disease of the genito-urinary organs,’ wording repeated in the Bill which was passed.

Initially, the phrase ‘to sell as a remedy’ was utilised in a draft of the Bill; however, it was believed that there might be some difficulty in securing evidence that something was being sold as a remedy. Therefore, the changes to this can be seen in point 2 of clause 1 of the Act. This made it more precise, and potentially easier, to prosecute. 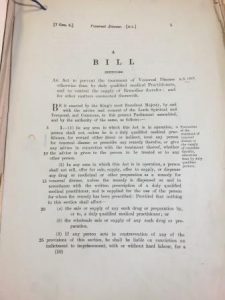 There were also issues relating to the advertisement of remedies for venereal diseases. The Royal Commission on Venereal Diseases recommended the prohibition of all such advertisements. They used newspaper advertisements of examples of those which could fall under this. The newspaper clipping below contains an advertisement for a remedy for ‘Rash, Pustular Eruptions, Hard or Soft Sores, Swollen Glands.’ The remedy suggested on this page is that of ‘Formula 606’. 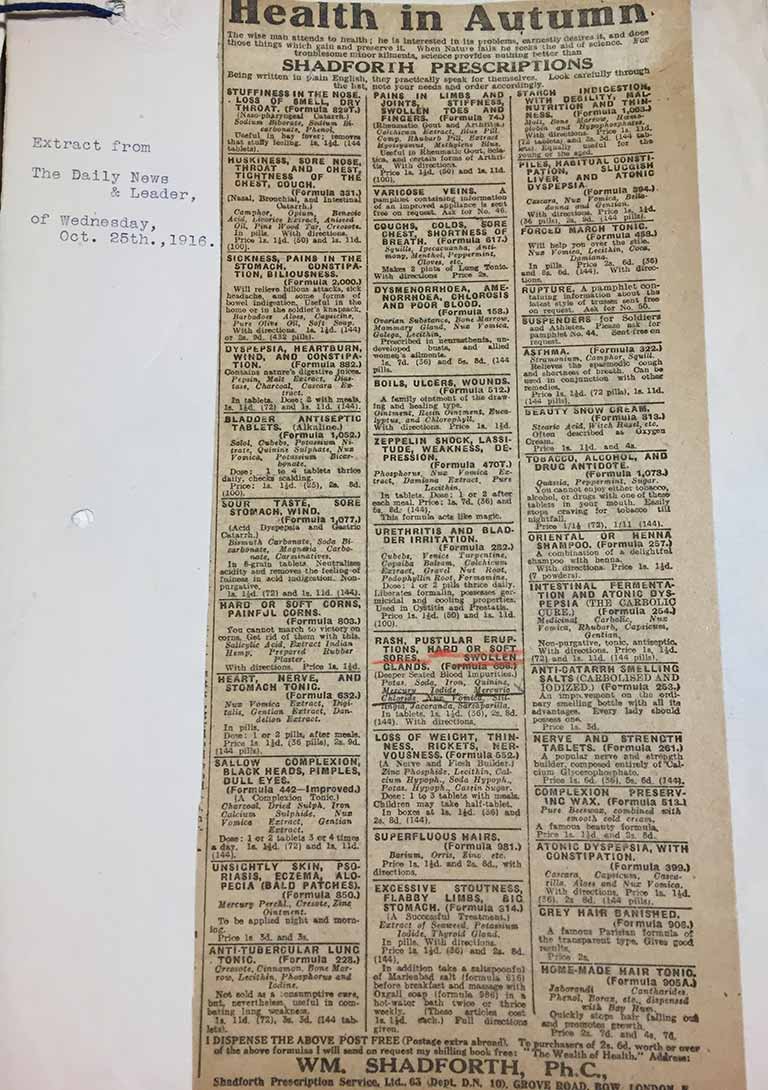 In particular the example of ‘Formula 606′ is delved into, and described as a’particularly gross example of the kind of medication by correspondence which leads to the extensive spread of venereal diseases as the result of unsatisfactory treatment’. The Mercuric Chloride (an ingredient of Formula 606) is something which can only be dispensed after signing at the counter and to a person known to the druggist, as under the Poisons and Pharmacy Act of 1908. In regard to this, it would appear that the druggist in question is actionable, and it was recommended that this issue be related to the Pharmaceutical Society. In 1889, the Indecent Advertisements Act was passed, which links into this issue with how, and if, remedies could be advertised.

It was believed that it would not be very difficult to pass the provision that all advertisements of remedies for diseases arising from sexual intercourse and referring to sexual weakness be prohibited. It was also further suggested that the advertisement of abortifacients could be stopped, at the same time. Clause 2 of the Venereal Disease Act goes into detail with regards to the ban on advertising.

We have examples of fines being imposed under the Act even in the 1930s, in other files at The National Archives – one for the treatment of VD and another for the issuing of pamphlets which contained an advertisement for such treatments, from newspaper clippings. As well as this, there are a few cases studies of apparent contraventions of the Act. One example relates to a woman who was said to have been treated by ‘606’ as well as ‘other local treatment of a very unusual and undesirable character’.