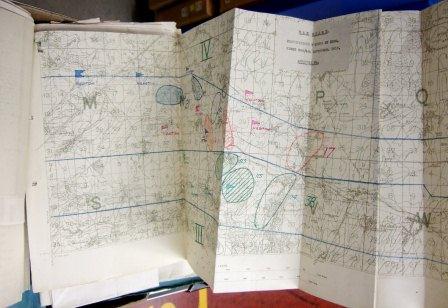 The National Archives is committed to digitising our collections as a tool for both access and preservation. The decision to make the collection of official First World War unit war diaries (series WO 95) available online has involved a huge collaborative effort across many departments and teams at The National Archives, and beyond. The project will make this important collection more accessible, and allows people to engage directly with the series by transcribing the pages as part of Operation War Diary.

There are 5,500 boxes of war diaries and the first phase of the project digitised 2,097 of these between 2011 and 2012. Each box contains an average of 700 documents of varying types, sizes, media and papers, so the whole series contains approximately 3,850,000 pages. The content is challenging for conservators and the digitisation teams as the material varies from pages smaller than A5 to large maps that can open out to more than double A0 size. 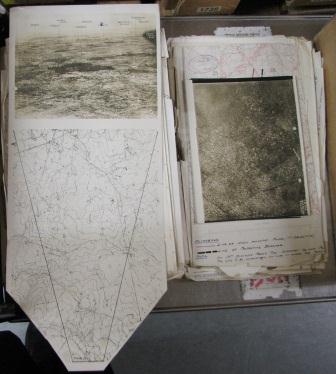 Variety of documents, including maps and photographs (catalogue reference: WO 95)

Conservators play an important part in digitisation. Documents can be handled multiple times during the process; we ensure they are protected. To reflect this, The National Archives is unique in having a separate team of qualified conservators who work specifically on digitisation projects as part of our Digitisation Services department. The team is strongly linked to the Collection Care department, who have responsibility for all other aspects of preservation, conservation and research in this area. We keep to the same ethical and professional standards.

Conservation for digitisation is undertaken before any digitisation occurs. It focuses on stabilising any documents that have suffered damage in the past to ensure that the risk of further damage is minimised, and on addressing any damage that may reduce legibility of the writing or image, so that we present the maximum amount of content in the clearest way. We take a minimal approach for digitisation specifically, because once the records are available online, the originals are protected from further handling: Digitisation itself is a preservation measure. 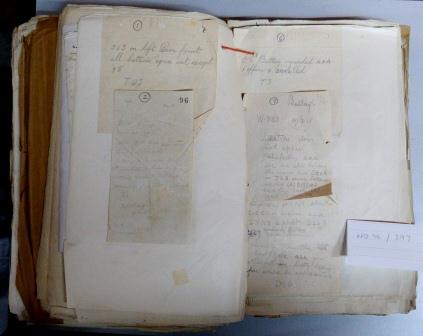 Our first step was to undertake a condition survey of the collection to understand the various materials and how they had fared over time. Modern wartime papers tend to be poor quality due to the paucity of available raw material; WO 95 is no different. In this sense, the material starts at a disadvantage. Despite this, and given that many were written in the field of battle in challenging surroundings, much of the collection is in very good condition.

The first phase of the project included France and Flanders material, which has been most popular with readers over the years. As with many archival collections, those that have been used most tend to be in poorer condition. The papers had suffered typical damage from handling over time, with the majority at edges where handling is most prevalent. 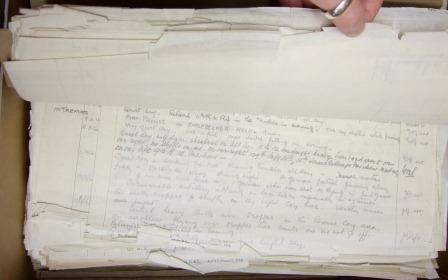 Our initial condition survey of the entire series estimated that conservation would take approximately 12 years using a traditional conservation technique of repair. This technique involves using splints (small strips) of Japanese repair papers (traditionally a more flexible paper than western-made ones) to hold together the two edges of a tear, with wheat starch paste used as an adhesive. This method requires the repair to be sandwiched between a release paper called bondina (to prevent sticking) and pieces of blotting paper to draw out moisture and allow the repair to dry after application to the document.

Once the results of the survey had been analysed, the conservation team researched and tested other conservation repair techniques to see if we could improve efficiency while maintaining our high standards.

This research resulted in testing a method set out in a recent peer-reviewed conservation journal which involves pre-applying adhesive (in this case, gelatine) to sheets of Japanese tissue laid on a polyester material called Melinex. Once this dries, splints can be pre-cut to size, peeled off the Melinex backing, and the adhesive reactivated by a very small amount of moisture at the time of application of the repair. This kind of repair is quicker to apply and dries very quickly, eliminating the need for blotter and bondina while retaining the requisite strength to stabilise the damage.

As a result, we saved both time and cost: tests showed that using this technique would save three years of work.

Although we condense the time period needed for conservation by increasing the number of team members working over a shorter period of time (for example, six people for two years, rather than one person for 12 years), to conserve all 5500 diaries would have caused challenges for other teams in the project and a decision was made to digitise the series in phases. The first phase, made up of the most used records, was undertaken by six conservators over the course of one year, with the remaining three years to be spread across the remaining project phases. 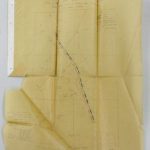 Map on transparent paper before conservation (catalogue reference: WO 95) 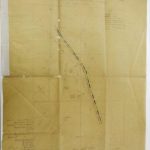 Map on transparent paper after conservation (catalogue reference: WO 95) 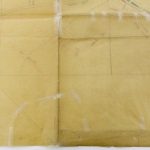 Close up of repairs from verso (back) of map which are invisible from recto, or front (catalogue reference: WO 95)

Holding history in your hands

The more recent phases of the project to digitise the remainder of the series have been made up of smaller selections of approximately 800 boxes at a time. As we predicted, the treatment requirement reduces significantly with each phase, as the documents have been handled much less frequently.

The conservators have very strict deadlines for treatment of each box to ensure that we maintain maximum efficiency for ourselves and the digitisation team. The greatest challenge of conserving these papers is to focus on the treatment and not get distracted by reading the fascinating accounts within the pages!

Conserving these records for digitisation allows the information contained within to be mined in greater depth, revealing new stories and opening them up to a wider audience, including military researchers, family historians, social historians, academic researchers and many others.

Being a conservator elicits a feeling of pride; it’s exciting to be literally holding history in your hands, and a privilege to be part of the process of both preserving our records for future generations and opening up our collections across the world in digital format so that they can be accessed by people well beyond our site at Kew.