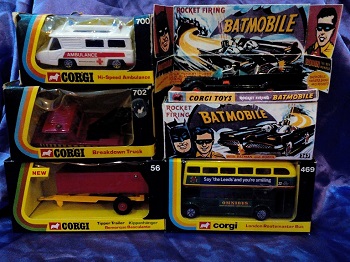 While many of us are no doubt aware of the successes of the British motoring industry in the 20th century, it’s easy to forget that at one point the UK was home to the major manufacturers of miniature toy cars as well.

The names of some of these – such as Spot On and Budgie – are all but forgotten now, but in the 1960s the big three of Matchbox by Lesney, Dinky by Mecanno and Corgi by Mettoy were the world leaders in their field. Of these three, Mettoy and their Corgi range were perhaps the company with the most interesting history, which itself we find recorded in several documents at The National Archives.

Fleeing Nazi persecution, Arthur Katz and Philippe Ullmann brought their toy making expertise, honed in Germany, to British shores in 1934. Due to the metal nature of their products, the two men named their company Mettoy (as in ‘Metal Toys’). Arthur Katz’s naturalisation certificate is among those held by The National Archives that can now be easily found as a result of a recent enhancement to the HO 334 entries on our online catalogue, Discovery. The document reference for his certificate is HO 334/466/11187. The certificate itself features the Mettoy company stamp on its reverse.

After the Mettoy factory in Northampton had been used to manufacture munitions during the Second World War, production of toys resumed. Such was the success of the company that they moved from their initial manufacturing operation to a modern facility in Swansea. 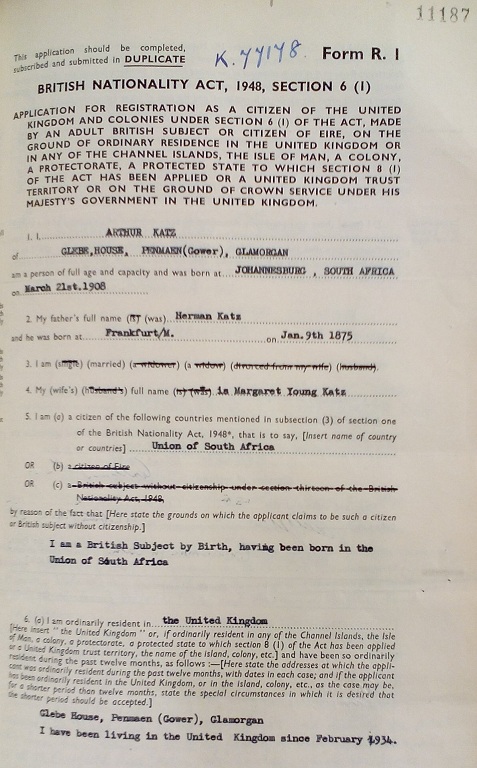 This is where we first find traces of Mettoy in the The National Archives. In 1951, the company took advantage of a discretionary grant awarded by the Board of Trade to assist in the construction of the new factory in Swansea. The records submitted by Mettoy in relation to their application for this grant can be found under document reference BT 177/1036 and continue in BT 177/1037.

BT 177/1036 includes fold out plans and elevations of Mettoy’s proposed new factory in Swansea, as well as case papers for their application for a grant, which detail Mettoy’s exports and projected growth figures. BT 177/1037 largely deals with further extension work to the factory, the results of which were to be paid for by the Board of Trade with Mettoy paying rent to them for use of the property. The Board of Trade initially wanted a 10% payment, but Katz attempted to negotiate the figure down to 7.5%. This document also contains an interview with Arthur Katz (which includes a photograph and biography) clipped from the ‘Western Mail and South Wales News’ newspaper dated Thursday 15 July 1954.

In 1956 Mettoy unleashed its most famous product, Corgi Toys. These toys, which were named after Queen Elizabeth II’s favourite breed of dog, offered a new style of highly detailed model car that had all the details of the ‘real’ thing, such as rubber tyres and plastic ‘windows’. A decade on from the hardships of the Second World War, there was a thirst for new consumer products, and with a huge population of children resulting from families enjoying their first settled period in some time, there was a ready customer base for Mettoy’s new output. 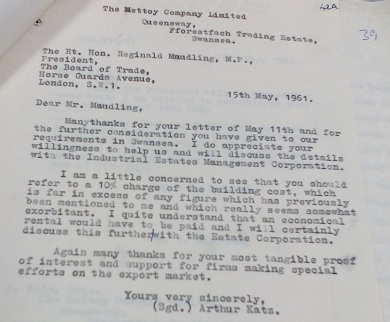 As they entered the 1960s, Mettoy with their Corgi range were at their peak. Their products were a huge export overseas, as noted by further case papers from this period, sent to the Board of Trade and now found in BT 177/1037. Mettoy was one of the first toy brands to see the worth in licensing the images of characters and vehicles seen in films and television, resulting in models added to the Corgi range such as the Batmobile, James Bond’s Aston Martin DB5, and Ian Fleming’s less swathe creation, Chitty Chitty Bang Bang. Mettoy also had a hand in other toy products, such as the Wembley brand of inflatable footballs. 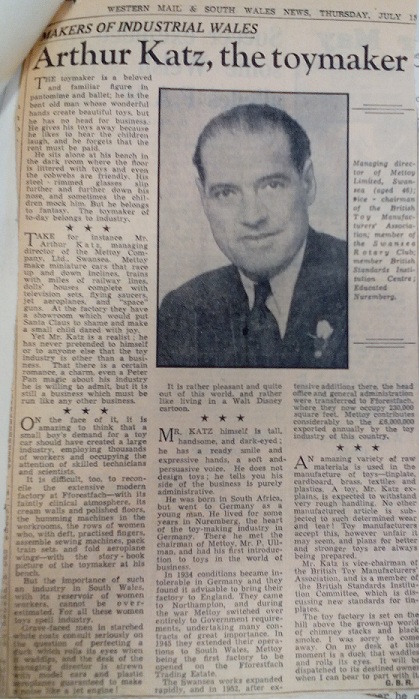 As the end of the 1970s approached, so too did hard times for Mettoy. The post-war baby boom was in decline, resulting in fewer children to sell their product to. The larger American-based toy companies had muscled in on the TV and film related merchandise market that Mettoy had pioneered, thus reducing their market share. The first computer and video games were also making their appearance, leaving Mettoy’s product output looking slightly dated.

Mettoy’s efforts to keep their Swansea factory running are where we next find them in The National Archives’ holdings. To assist struggling businesses to pay their workforce, the government had introduced the Temporary Short-Time Working Compensation Scheme, and in 1982 Mettoy applied to be part of this. Essentially, in order to stop redundancies employees were required to work shorter hours, while the government awarded a grant to ‘top up’ workers’ salaries. Mettoy’s application paperwork for the scheme can be found under document reference LAB 87/141. Among the products listed in this document as being worked on by the company at the time was the Dragon home computer. Until I read the document, I was unaware that this computer was a Mettoy product, and this shows that the company was making some inroads towards the kind of playthings that children of the 1980s wanted.

Despite these efforts, Mettoy finally ceased trading in 1983.

This was not the end for the Corgi brand, though, as it was revived a year later by a group of former Mettoy employees, still using the Swansea factory for manufacture. This new company’s focus changed to be based around replica models aimed largely at adult collectors rather than at children. It is this incarnation of the company that survives to this day, now owned by the model train manufacturer Hornby.

The Victoria and Albert museum holds further records for the Mettoy company as part of the archive of the Museum of Childhood at Bethnal Green.

I suspect there are many people nostalgic about the toys of their childhood, but very few of us would think to look for the records of the companies that made those toys. Often in the records at The National Archives we see the horrors of war or family trauma presented to us, so it’s pleasant to also find records relating to the things that made us happy when we were younger.