In his address to the US Congress following the moon landings of 1969, Neil Armstrong said that mysteries ‘create wonder and wonder is the basis for man’s desire to understand’.  Who knows what mysteries will be solved in our lifetime, he added, and what new riddles will become the challenge of future generations? 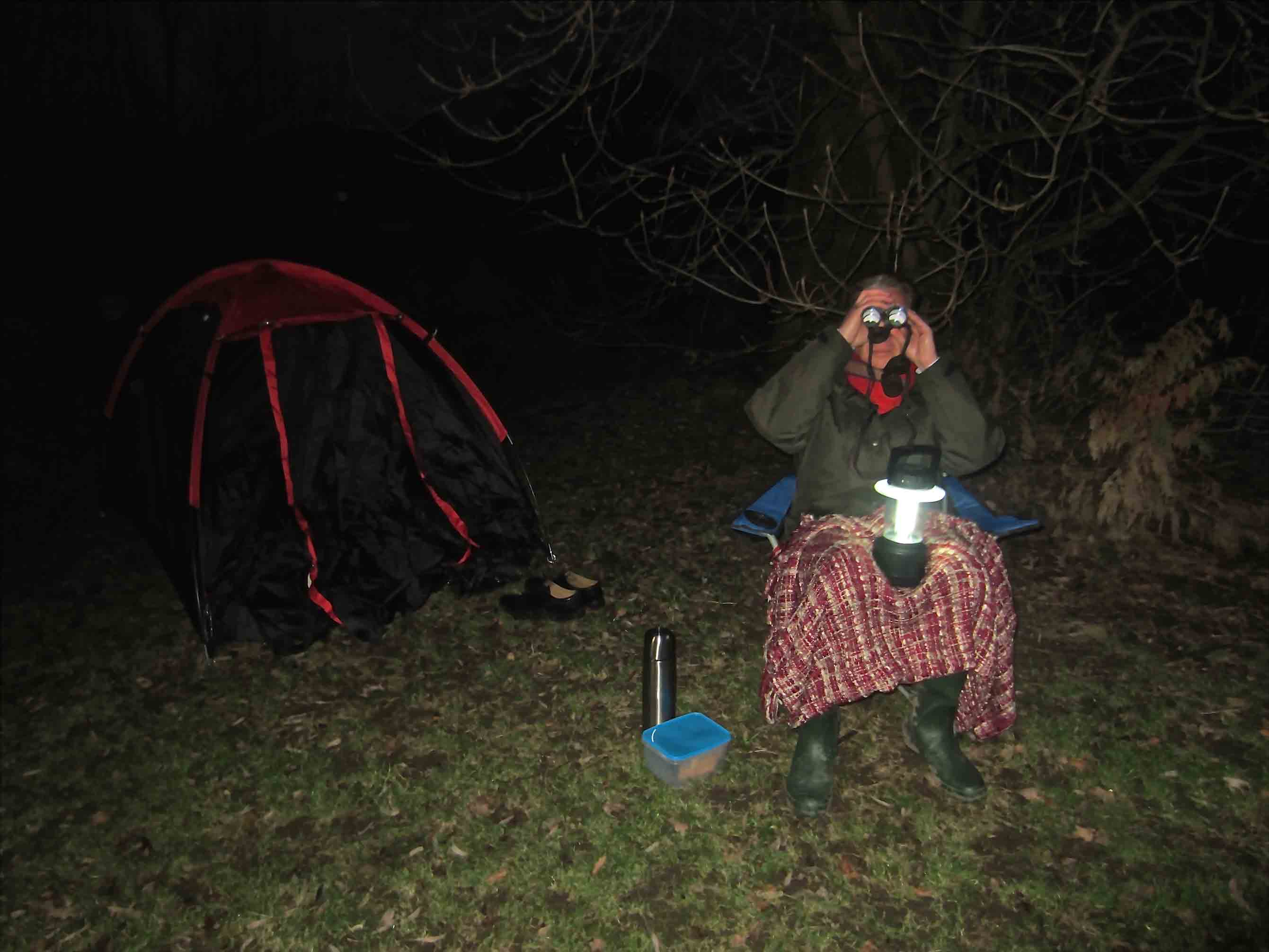 Michael Portillo searches for UFOs. Photo courtesy of the BBC.

The National Archives at Kew contain records of many unsolved mysteries from Britain’s past and I drew upon these for my 2013 book Britain’s X-traordinary Files (Bloomsbury). Three unsolved mysteries of the last two centuries are featured in the fourth episode of Michael Portillo’s State Secrets, broadcast on BBC 2 on 26 March.

In past centuries unexplained events helped to sell newspapers and today they drive millions of people to seek answers on the internet. In cases of mysterious deaths and disappearances the very absence of evidence encourages speculation about dark conspiracies. At the height of the First World War in June 1916 news of the death of Lord Kitchener when the battle cruiser HMS Hampshire sank west of the Orkney Islands shocked the nation to its core. Kitchener was en route to Russia with more than 600 officers and men to attend secret war negotiations when his ship struck a German mine.

The fact that his body was never found encouraged all sorts of unlikely rumours including one that he had been assassinated by a Boer solider spy. Another claimed that he, like King Arthur, was alive and well and waiting the call for him to return and save his country from peril. The broadcaster Jeremy Paxman has compared these stories with those that followed the death of Princess Diana but, he said, ‘the banal is always more likely than the bizarre’.

The most notorious was ‘the Kitchener Coffin Hoax’ (MEPO 2/2469) perpetrated by a freelance journalist, Frank Power, in the pages of the Sunday Referee newspaper in 1926. Power claimed the body of Kitchener had been found by a Norwegian fisherman and arranged for it to be brought back to London in a coffin for internment at St Paul’s Cathedral. The hoax unravelled when the police seized the empty coffin and opened it in the presence of the famous pathologist, Sir Bernard Spilsbury. Despite the public outrage, Power escaped prosecution but the exposure of his hoax did nothing to halt the rumours of a cover-up.

Scotland Yard also suspected that a well-informed journalist may have been responsible for sending the infamous ‘Dear Boss’ letter during the Ripper murders in Victorian London. The handwritten letter was received by the Central News Agency just a day before the bodies of two women –the killer’s third and fourth victims – were found murdered and horribly mutilated. Signed by ‘Jack the Ripper’ the letter was just one of hundreds sent to the authorities and the press during the reign of terror in 1888 (other examples can be seen in MEPO 3/3153). The arrival of a second letter, smeared with blood, that referred to specific details of the murders, persuaded detectives the same person was responsible for writing them. But was the writer really the killer or just someone who wanted to generate a sensational headline?

In the event, the police’s decision to publish the Ripper letters in the hope that someone might recognise the handwriting backfired and added to the killer’s growing notoriety. As Richard Taylor writes in Secrets of the National Archives, far from producing any new leads this ‘prompted a wave of copycats, with taunting messages and promises of more murders to come’. Hundreds of further letters poured in, claiming to be from the Ripper, some from as far afield as Portugal, Ireland and the USA. Meanwhile the author of the original letter slipped back into the shadows.

A small cottage industry, Ripperology has grown up around the murders with investigators such as Patricia Cornwell and Russell Edwards sifting through surviving evidence in search of a ‘prime suspect’.  Among the unlikely theories that have become part of the Ripper legend is one that depicts Jack as a deranged surgeon who killed the women as part of a conspiracy to protect a member of the Royal family. The historian Professor William Rubinstein describes this as ‘palpable nonsense from beginning to end’. He believes it is the very elusiveness of the solution that continues to make the Ripper mystery so attractive to writers and historians.

The final mystery that Michael Portillo examines has also attracted massive media interest, a deluge of letters from the public and conspiracy theories by the shedload. But the Rendlesham Forest UFO legend, often described as ‘Britain’s Roswell’, after the alleged 1947 crash of a flying saucer in New Mexico, is certainly not a hoax. The story first came to light when a memo written by an American officer, Lt Col Charles Halt, to Britain’s Ministry of Defence (MoD) was published by The News of the World in 1983.

Lt Col Halt was the deputy base commander at RAF Woodbridge that, in December 1980, was part of a large USAF airbase complex in the Suffolk countryside. His report told of ‘Unexplained Lights’ that were seen falling into the forest by security policeman stationed at the perimeter of the base in the early hours of one morning. Thinking that an aircraft had crashed, a three-man patrol went out to investigate and found the entire forest illuminated with a white light. They saw a triangular object, two or three metres across and three metres high, hovering among the trees that moved away as they approached. Halt’s report notes how, the next day, holes were found in the ground and higher than expected levels of radiation were detected in the area where the lights were seen by his men.

But that was not all. Two nights later the lights returned and Halt led a team of airmen into the forest to investigate armed with a Geiger counter and a hand-held tape recorder. As his team examined the alleged landing site a strange ‘red sun-like light’ appeared in the trees and appeared to throw off glowing particles. As Halt led his men out of the forest they saw further lights in the sky including one that ‘beamed down a stream of light’ from time to time.

The USAF report has since become one of the most famous documents in the history of UFOlogy, as the study of UFOs is known. But the famous Rendlesham file (DEFE 24/1948/1) that was opened by the MoD casts doubt on the idea the lights seen by Halt and his men really were flying saucers from another world. I was the first person to obtain a copy of the file, using the precursor to Britain’s Freedom of Information Act in 2001, but I was disappointed to find it contained no ‘smoking gun’. 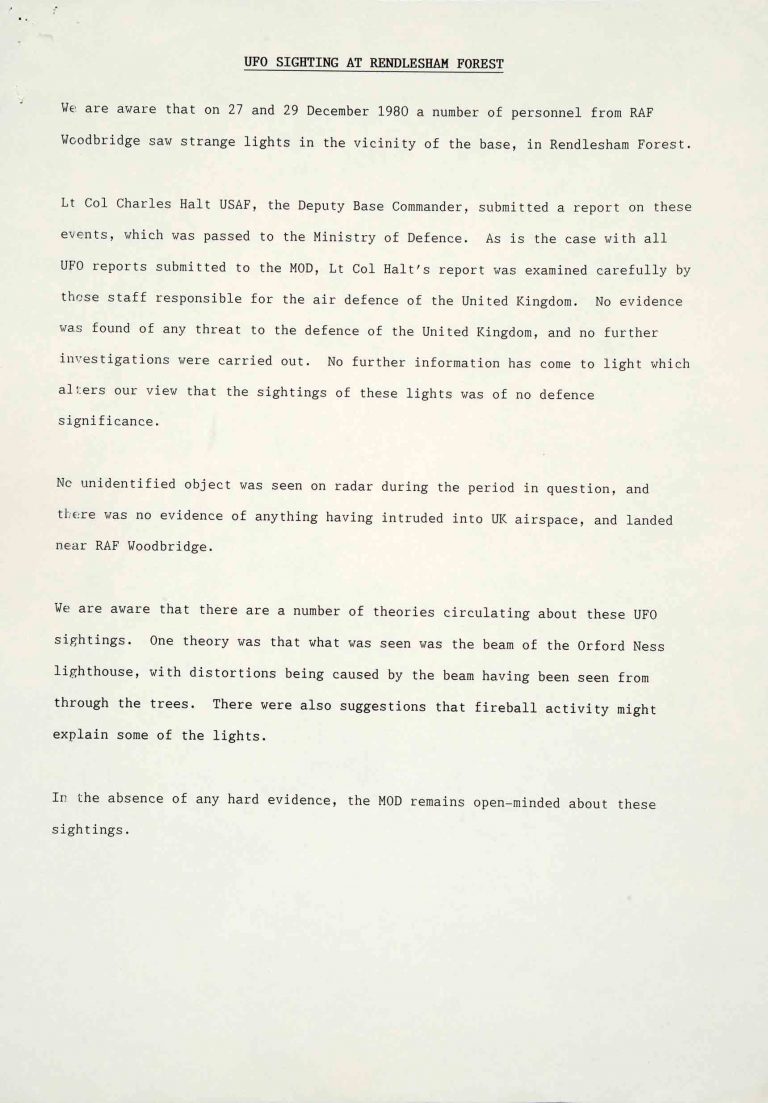 Far more interesting was the content of another UFO file (DEFE 24/1924/1) that was used to brief Lord Peter Hill-Norton, a former Chief of Defence Staff, for whom the story had become something of a cause celebre. In 1985 the noble lord, then in retirement, asked for a private meeting with the MoD to discuss UFOs and the Rendlesham incident.

In the briefing he received, the MoD UFO desk officer says ‘the fact that Col Halt did not report these occurrences to MoD for almost 2 weeks after the event, together with the relatively low key manner in which he handled the matter (given resources available to him) are indicative of the degree of importance in defence terms which should be attached to the incident.’ The note adds that it was considered ‘highly unlikely that any violation of UK airspace would be heralded by such a display of lights [and] I think it equally unlikely that any reconnaissance or spying activity would be announced in this way.’

But the key piece of evidence against the UFO interpretation of the Rendlesham incident was the lack of any traces on RAF air defence radar. ‘Inquiries made both at the time and subsequently failed to reveal…anything unusual in the area at the time,’ it said.

Much like the true identity of Jack the Ripper, the Rendlesham UFO mystery has become a legend. Theories about the true identity of the murderer or the source of the lights seen by Lt Col Halt and his men are impossible to disprove. As a result, both legends will live on as long as there are people to debate their truth or falsity.