Poetry and the First World War 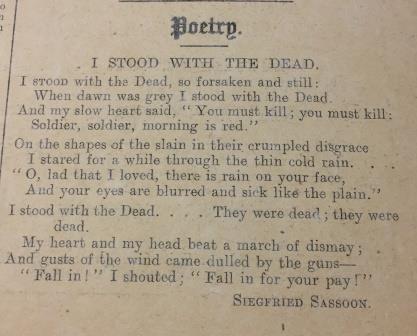 With National Poetry Day 2016 taking place tomorrow, and with us being in the middle of the centenary of the First World War, it seems only appropriate to bring the two together.

In this blog, I want to turn the focus away from obvious choices of Siegfried Sassoon and Wilfred Owen – although both poets do have their merits and deserved place in history. And we do hold service records for both within our collections [WO 138/74 for Owen, and WO 339/51440 for Sassoon] as well as records which, for example, display their names on the registers for Craiglockhart Hospital [MH 106/1887], where they both convalesced.

Sassoon’s record is also particularly interesting, as it contains a copy of ‘The Nation’ – within which there is a poem by him, entitled, ‘I Stood With The Dead’. 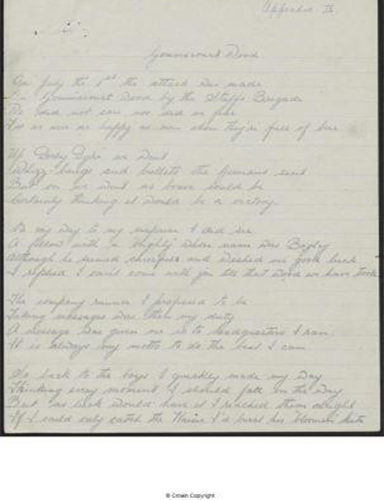 Another place to highlight that one might be lucky enough to find some poetry relating to the war is within WO 95 war diaries. For example, hidden within the diaries for 1/5 Battalion South Staffordshire Regiment, it is possible to find a poem written by Private G Getley in 1917, entitled ‘Gommecourt Wood’ [WO 95/2686]. Finding a more personal touch such as this is nice, in and amongst something so uniform as a war diary.

I am going to use this blog to focus on three other – still well-known – poets who are closely associated with the First World War: Geoffrey Studdert-Kennedy, Charles Hamilton Sorley, and Edward Thomas. Unfortunately, none of these records contain any of the poetry which they wrote, but by looking at their service records, we can gain an interesting insight into their time during the war, and perhaps understand further what drove them to write such poetry.

Geoffrey Studdert-Kennedy, of St. Paul’s Vicarage, Worcester, agreed to serving as a temporary Chaplain to His Majesty’s Forces, 4th Class, on 11 December 1915. He had been signed off as ‘physically fit’ two days prior to this. What is of great interest is the insight into which this file gives us as to Studdert-Kennedy’s time at the Front. On 27 October 1916, a ‘Medical Board Report On A Disabled Officer’ was filled out for Studdert-Kennedy, stating that he was suffering from debility. This came after an attack of asthma and bronchitis and he was recommended 14 days sick leave to England. Less than a year later, on 16 August 1917, another form was filled out – this time he was suffering from trench fever. This required indoor hospital treatment in an officer’s convalescent hospital.
And, once more, he was admitted to hospital in October 1918, after being involved in an enemy gas attack and subsequently suffering laryngitis. All in all, it doesn’t sound like Studdert-Kennedy had the most pleasant of times. Yet when we compare him with the next poet, Studdert-Kennedy’s experience is not nearly so tragic… 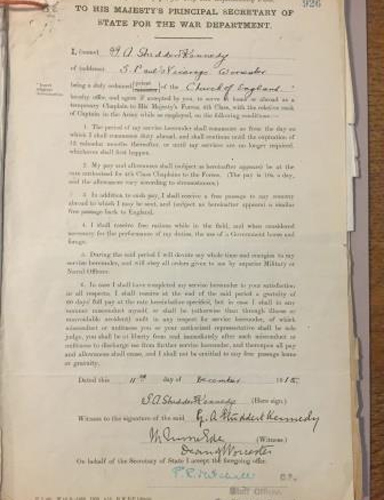 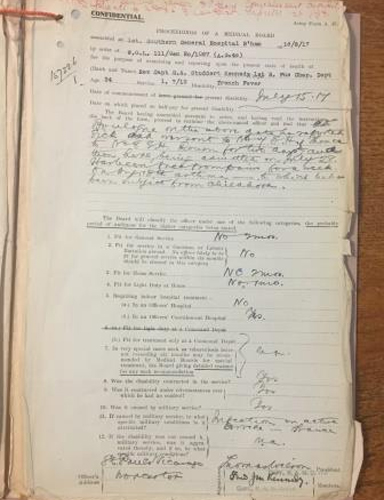 Proceedings of a medical board for Studdert-Kennedy (catalogue reference: WO 339/77762)

‘When you see millions of the mouthless dead
Across your dreams in pale battalions go,
Say not soft things as other men have said,
That you’ll remember. For you need not so.’
Sorley completed an application form for a temporary commission in the regular army for the period of the war and signed it on 17 August 1914. He became a Captain in the 7th Suffolk Regiment. Interestingly, attached to this application is a letter from his father, giving consent for his son to make the application.

Unfortunately, most of Sorley’s record contains documents relating to his death. He was killed in action on 13 of October 1915, at the age of 20, during the Battle of Loos.
As was often the case in this conflict, there is a note added to the side of one document which states that there was no record of his body having been recovered. Poignantly, the excerpt of poetry above is from a poem which was discovered in his kit bag, after his death.

‘Rain, midnight rain, nothing but the wild rain
On this bleak hut, and solitude, and me
Remembering again that I shall die
And neither hear the rain nor give it thanks
For washing me cleaner than I have been
Since I was born into solitude.’
What sets Thomas apart from the other two poets is that he was married with two children. Yet, on 19 July 1915, his attestation papers to join the ‘Artists Corps’ (commonly known as the Artists’ Rifles) were completed and signed. One of my favourite things about Thomas’s file is that on his application form for this commission, under the question of employment in civil, he states ‘author’.
Unfortunately, Thomas’s story does not have a happy ending either. On 9 April 1917, he was killed in action, leaving behind his family. Initially, there was some indecision as to where his body was, but later that April, a report was received stating his burial place as Agny Military Cemetery. One of the most interesting sections of his file is that which contains information of the effects he left; amongst Thomas’s things were books – including Shakespeare, and two by Robert Frost: ‘Mountain Interval’ and ‘Annual Of New Poetry’. Frost and Thomas had been friends for a few years at this point, and it was Frost who had initially encouraged Thomas to write poetry. 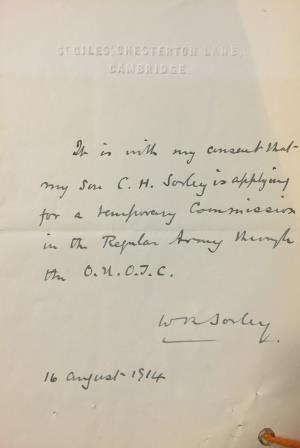 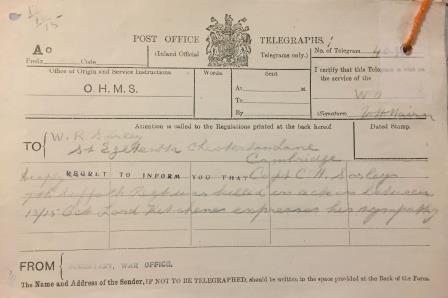 Telegram announcing that Sorley had been killed in action (catalogue reference: WO 339/11501)

Look out for our The National Archives tweets for National Poetry Day tomorrow, and feel free to join in!