Poems for a princess 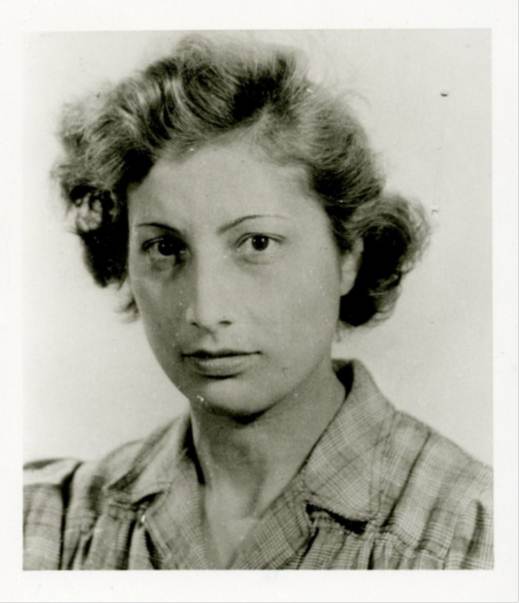 This year marks 100 years since the birth of Noor Inayat Kahn, known in the media as the ‘spy princess’.

In 2003, The National Archives released the Special Operations Executive (SOE) file of Noor Inayat Khan (HS 9/836/5), aka Jeanne Marie Renier, prompting great interest from the press. Her image as a fearless young woman fighting a secret war who died selflessly for her beliefs, coupled with her heritage from Indian nobility made her an intriguing heroine.

Noor-un-Nisa Inayat Kahn was born to an Indian father and American mother (Noor-un-Nisa was the name her family used to refer to her). Her father, Hazrat Inayat Khan, was the founder of the Sufi Order in London and was a teacher of Universal Sufism. Her mother was Ora Ray Baker born in New Mexico, who became Pirani Ameena Begum following her marriage.

The Inayat Kahn family lived in Paris when, in 1940, Noor escaped to England after France fell and joined the Women’s Auxiliary Airforce. She joined the Special Operations Executive in 1942 and was the first woman to be sent to France to work as a wireless operator. In October 1943 she was betrayed, captured by the Gestapo and sent to Pforzheim Prison in Germany. She was repeatedly tortured but refused to reveal any information. In September 1944 she was transported to Dachau Concentration Camp where she was executed on 13 September.

In recent years, many blogs, books and now films have told her remarkable story and here at The National Archives we share it further through our Education service and Keeper’s Gallery.

Recently I have been looking in to various connections between archival sources and poetry, and have come across more personal records of Noor in the form of her mother’s poetry.

Ameena Begum had four children, Noor-un-Nisa, Vilayat, Hidayat and Khair-un-Nisa. Following her husband’s death in 1927, she was grief stricken and wrote poetry expressing her sorrow and celebrating her husband and children. She left the collection ‘Rosary of a hundred beads’, only some of which survived the war. The surviving collection has since been published through the work of her son Hidayat, but only in the late 1980s and has had little attention. The Petama project published a paperback and free e-book of the poems in 2012 which can be found here.

In particular, there are two poems relating directly to Noor, giving us a glimpse through a mother’s eyes of the child that would become the determined SOE agent we now know. I have reproduced these below with kind permission of Hidayat Inayat-Khan and the Petama project.

The poems are obviously written by a loving mother who thinks the world of her children. As a source for Noor’s character, she speaks of intelligence and her ability to teach, strong characteristics for her future career.

The first appears to have been written to celebrate an achievement of Noor at school in Paris, shortly after her father’s death:

Graceful in manner, fair of face,

Deep in thoughts and wise in speech,

Little comrades in school, you teach.

Today, first prize do you receive,

In music, highest to achieve.

‘Tis He, who sent it from above,

To His child with His deepest love.

(‘Amma’ is a familiar form for mother)

The second marks Noor’s 14th birthday and again refers to her intelligence and many talents:

A bud from the stem of Divinity

With petals eager to unfold

To the fullness of God’s vast beauty,

With a heart full of loving forgiveness

And mind from the highest abode,

An inspired soul of saintliness,

From a Father of rarest birth,

His arms surrounding you in guidance

Thro’ many happy years on earth.

These talents praised by her mother seem to have been less obvious to some of the SOE training officers that filed reports on Noor, or ‘Nora’ as she is listed, referring to her as ‘clumsy’ and ‘not over-burdened with brains’. However they also note she is ‘enthusiastic’ and ‘shows considerable promise’, something she certainly lived up to in the field. 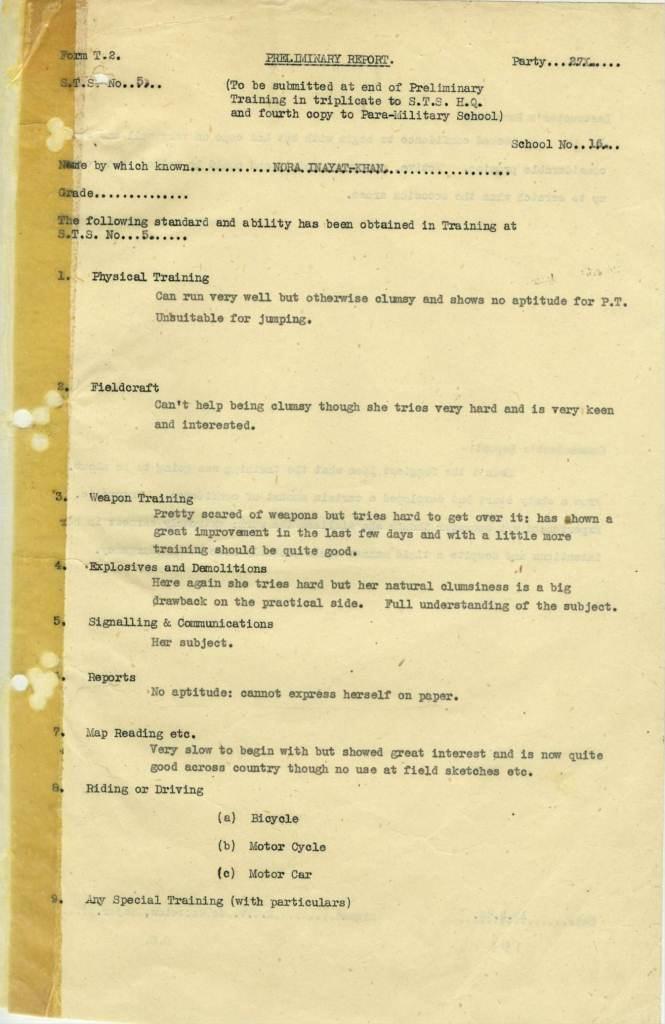 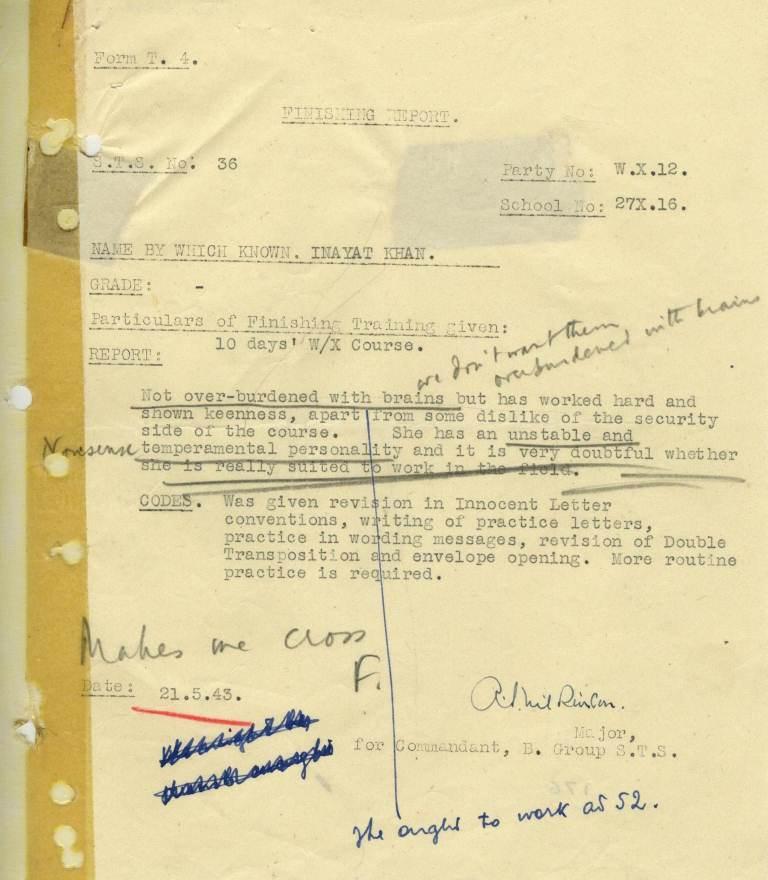 Noor Inayat Khan was posthumously awarded the George Cross in 1949. In 2012 a statue of her was unveiled in Gordon Square, London to honour her work and sacrifice.