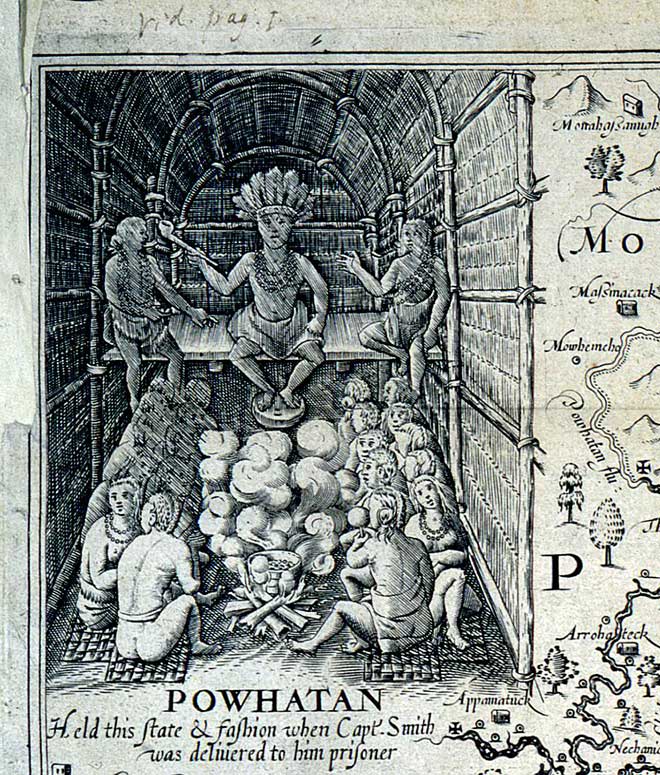 Representation of Chief Powhatan’s court taken from print of Captain John Smith’s map of Virginia made in 1608. Pocahontas may be one of the two figures either side of the chief (catalogue reference: MPG 1/284)

This month sees the 400th anniversary of the visit of Pocahontas, the Algonquian Indian princess, to London with her English husband, young son and a group of fellow countrymen and women. They crossed the Atlantic at the request of the Virginia Company to encourage the English to invest in the colony.

Pocahontas is remembered today as the Native American child who made friends with Captain John Smith in 1607 and whose subsequent interaction with the new English arrivals eventually led to a period of peace between her people and the colonists. She converted to Christianity and married John Rolfe in 1614, changing her name to Rebecca Rolfe.

Related to and representing a foreign ruler, but speaking English and appearing in English dress, for people in 17th century England Pocahontas combined the exotic with the familiar. Her story, laced with myth, has been retold many times over the intervening centuries and she remains a key figure in American history.

We have surprisingly few references to her visit in the public records, but here are a few of those which do survive.

The first mention of the visit is dated 22 June 1616. The prolific letter writer John Chamberlain reported that Sir Thomas Dale, Deputy Governor of the colony, had brought from Virginia:

‘some ten or twelve old and younge of that countrie, among whom the most remarquable person is Poca-huntas (daughter to Powatan a kinge or cacique of that countrie) maried to one Rolfe an English man…’

He went on to report that the country promised well, but no present profit was expected.

John Chamberlain wrote to Sir Dudley Carleton about Pocahontas again on 18 January 1617. Carleton was the English ambassador in The Hague and Chamberlain wrote to him regularly to tell him the news he had gathered from walking around London and, in particular, from frequenting the centre of gossip which was St Paul’s Cathedral.

In this letter, Chamberlain noted that Pocahontas had recently attended a masque hosted by King James I. Ben Jonson’s ‘Vision of Delight’ was performed before the court on Twelfth Night 1617 and at it Pocahontas was accorded the status of a visiting ambassador. She was also received on separate occasions by the Queen and by the Bishop of London.

‘The virginian woman Poca-huntas, w[i]th her father[‘s] counsaillor have ben w[i]th the king and gracioussly used, and both she and her assistant well placed at the maske, she is upon her return (though sore against her will) yf the wind wold come about to send them away.’

The wind took its time in changing direction, as the party did not depart from the port of London until March 1617. Shortly afterwards though, Pocahontas was taken ill and the ship docked at Gravesend in Kent, where she died and was buried. She is thought to have been only 21 years old.

John Chamberlain reported the news without any emotion: ‘…the virginian woman (whose picture I sent you) died this last weeke as she was returning homeward.’

Pocahontas’s story in the archives does not end with her death. The engraved picture of her by Simon de Passe, produced and circulated during her visit to London, formed the basis of several subsequent paintings. A photograph of one of these, taken in 1884, is in our copyright records. The painting itself is now in the collection of the Smithsonian National Portrait Gallery in Washington DC. 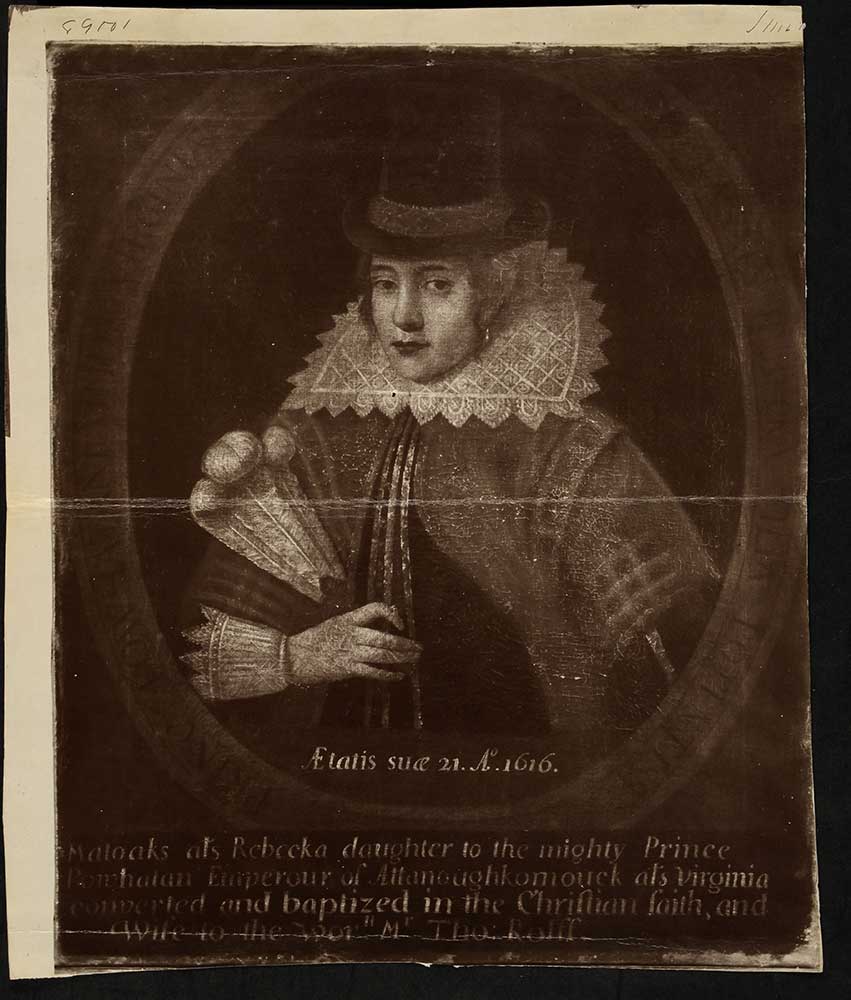 Photograph (registered for copyright purposes in Norfolk in 1884) of a 17th-century painting of Pocahontas based on the published engraving of her image (catalogue reference: COPY 1/369/171)

An early 20th century Home Office file (HO 45/14558) ends the story of Pocahontas at The National Archives. In 1923, probably inspired by the results of excavations of Tutankhamun’s tomb in Egypt, the English Speaking Union applied to exhume Pocahontas from the graveyard in Gravesend, hoping to be able to repatriate her remains if they were found. One representative, Edward Page Gaston, lamented the fact that ‘our American Princess has slept for centuries in an unknown grave in this distant land’. The exhumation attempt was unsuccessful and the extensive and mainly negative press commentary clearly exasperated the Home Office. 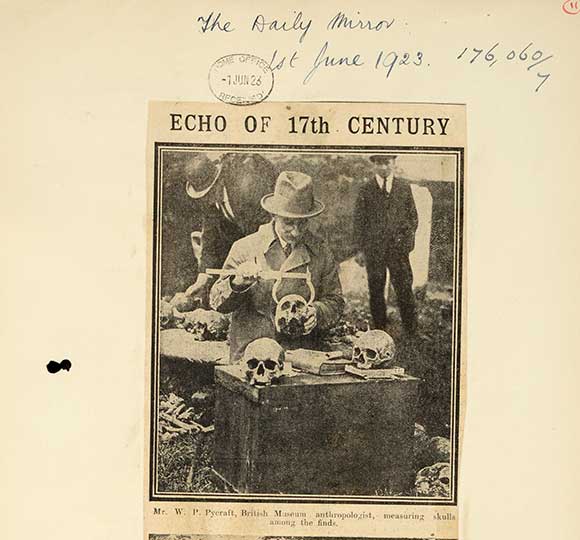 Newspaper cutting from the Daily Mirror, 1 June 1923, documenting the search for the remains of Pocahontas (catalogue reference: HO 45/14558)

The Daily Express had its own inventive scoop with the story that:

‘Princess Pocahontas, the pretty Red Indian princess who married an Englishman and was buried at Gravesend after living happily with him in this country for many years, may have been sold to a rag and bone man for a balloon’.

However, the tone of the rest of the press tended to match that of the Evening News which stated ‘This is a meddling curiosity, a peeping sacrilege’.

A display of facsimiles of these documents will be viewable in the Keeper’s Gallery at Kew for the next six months.

If you want to know more about records of the early encounters between Europeans and Native Americans, see our Education resource on Native North Americans.