Pigeons at Loos: heroes of the sky 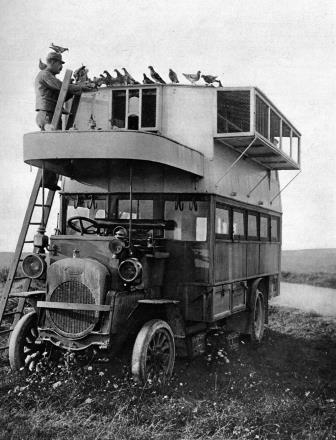 Carrier pigeons on active service with the French Army using a converted bus, 1915

Pigeons probably aren’t the first thing you think of in relation to The Battle of Loos, the first main British offensive of the First World War which began 100 years ago on 25 September 1915.

However, as part of over 350 Army HQ unit war diaries being published online today, the lesser known details around the tactics and strategies of HQ and Commanding Officers at the Battle of Loos can now be shared globally.

One of the diaries (WO 95/123/4) reveals that the Battle of Loos was the first time HQ had trialled the pigeon messenger service as part of its battlefield communications in the First World War. They started by enlisting 60 men across from across England, Scotland and Wales for the GHQ Pigeon Messenger Service. The men all arrived in France on 19 August 1915 where Alec S Waley, Captain of the Carrier Pigeon Service, organised all the lofts and trained the troops to use the pigeons ready for their first real test at the Battle of Loos.

The messages delivered by pigeon were critical, giving indications for the direction of artillery fire during battle. It is noted on 27 September, two days after the start of the battle, that a message of 152 words was delivered by pigeon  within 25 minutes, despite heavy gunfire and bad weather.

It’s interesting to reflect on the importance of using pigeons to send short, succinct messages very speedily in difficult situations, and what today’s version would be – instant messaging? Perhaps even Twitter…

Extract from war diary of the pigeon messenger service October 1915 (catalogue reference: WO 95/123/4)

There is also some interesting information on the value of using carrier pigeons in the booklet entitled ‘Organisation of a Carrier Pigeon Service for the Armies in France’ dated 28 August 1915 (war diary WO 95/123/10). The booklet states that:

‘a carrier pigeon can cover a distance of 150-200 miles at an average air speed of 30 miles an hour. To get the best out of him he must be conditioned as carefully as a greyhound.’

It provides advice on caring for the pigeons as well as instructions for how to hold them: ‘A carrier pigeon is a highly-strung intelligent bird, and should not be handled like a hen.’

Extract from Organisation of a Pigeon Messenger Service for the Armies in France (catalogue reference: WO 95/123/10)

Later in the war, pigeons were dropped by aeroplane, and there is an amusing diagram in AIR 10/184 that shows how pigeons are to be wrapped, rather like a burrito, for dropping from air-crafts.

Fortunately, despite some initial hiccups relating to pigeon handling, storage and weather issues, it seems that many of the pigeons provided a great delivery service, and some even managed to survive heavy shelling. Later in the war diary, just before Christmas 1915, a Signal Office was hit, killing the operator and blowing the inside of the house to pieces. However, the birds in the loft were untouched and while a little shaken, were fit for work within a few days.

If you’d like to find out more about the role of pigeons in the First World War, come to our free talk at The National Archives: Pigeons, prisoners and panic: Records of espionage in First World War Britain