Our man in Antigua: Oliver Baldwin, an unconventional governor

In my opinion the policy adopted by Earl Baldwin towards the populace of the Leeward Islands has been misguided.

Sir Hubert Rance, Acting Governor of the Leeward Islands, in a Telegram to the Colonial Office, London 14 February 1949 1. 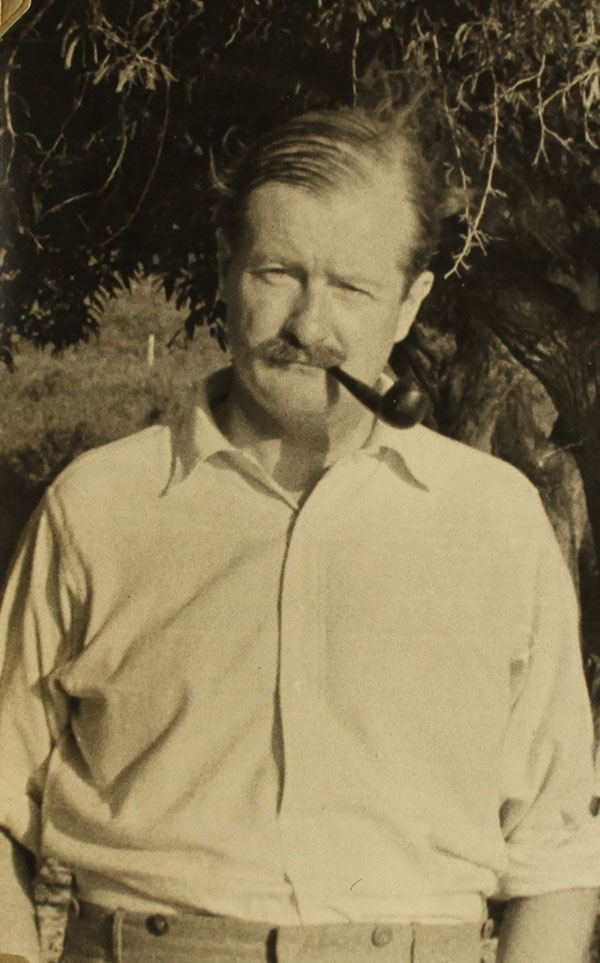 Several years ago the Outreach Team launched a community-based initiative, Caribbean Through A Lens, encouraging community groups to identify and share information through the photo sharing website Flickr. At the time, we posted several of the images from CO 1069/415 online but unfortunately did not glean much information about the names of people or places within the album. Fortunately, a recent visit from an American academic, Dr Barbara Paca, Cultural Envoy to Antigua and Barbuda, led to a meeting with an elderly resident of Antigua now living in the UK. Mr Jules Walter, an historian and a retired actor, came into the archives and was able to identify key personalities in the album. This in turn inspired me to do further research and dig into the colourful character that was Oliver Baldwin.

Oliver Ridsdale Baldwin, (1899-1958) was an atypical Governor of the Leewards Islands between 1948 and 1950 during a difficult economic period for the Caribbean Islands. He was a socialist – a philanthropic, gregarious and generous character with a strong intellect who did not stand on ceremony. Looking at the records, it seems that his behaviour and actions may have caused alarm and fear among the islands elite. The National Archives possesses two important files relating to his period of office: a Colonial Office photographic album (CO 1069/415) compiled by his private secretary, Ross Hutchinson, and a more officious file (CO 537/4884) relating to the controversy surrounding his recall to London by Secretary of State for the Colonies, Arthur Creech Jones, in February 1949.

Baldwin was the eldest son of Stanley Baldwin, Conservative Prime Minister from 1924 to 1929 and 1935 to 1937. He had become a Labour MP in 1929, but on the death of his father inherited the title Earl Baldwin of Bewdley. 2

In January 1948, he accepted the role of Governor of the Leewards – Antigua, Montserrat, Barbuda and St Kitts-Nevis-Anguilla. Arriving in Antigua on 23 March, he sought to bind the community together and improve the economic and social infrastructure of the islands. In attempting to do this he would disturb the equilibrium of social hierarchy existing on the islands between a minority white plantocracy and the thousands of ordinary black or mixed race labourers who toiled in the islands sugar plantations. Moreover, the documents suggest that he was distrusted by civil servants in London and by some of the colonial elite within the Caribbean sphere itself. On his appointment in March 1948, the ‘Crown Colonist’, mouthpiece of the colonial elite, criticised the Labour administration for appointing ‘someone with no experience whatever in the difficult art of Colonial administration’. 3

Baldwin wanted to see the different classes and racial types within the Leewards come together. He had a journalistic and theatrical background, having put on amateur plays and musicals in 1930s London. He had also worked in Intelligence during the war. Arriving in Antigua he was shocked by the chasm existing between rich and poor and sought to address this. In an early letter home he stated, ‘There is a great deal to do, I find the owners thinking I have a bomb in each pocket and the black workers expect me to bring them a new world.’ 4

He felt that the economy of the islands needed diversification (its economy was 85% dependent on the export of sugar), that its water supply needed to be improved, that innovations in trade with the mother country should be prioritised and that its health service, with the provision of a new Antiguan hospital, was urgently required. Evidence in the photo album demonstrates his attempts to bridge the social gap: he invited the poor to social occasions in Government House, St Johns. He recorded in a letter home, that he ‘went to a dance in aid of the hospital and danced with the blackest woman in the room, much to the annoyance of the whites’. 5 He actively sponsored the relatively new Steel Bands, perhaps even naming a few – ‘Red Army’, ‘Brute Force’ and ‘Hell’s Gate’ – allowing them to play outside Government House and community fetes. 6 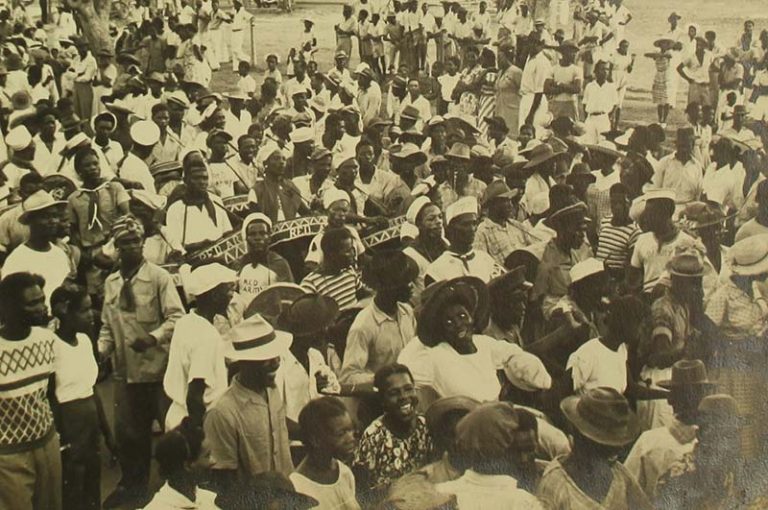 More practically he paid for a water diviner, Claud Bell, to come from Jamaica to search for wells and underground streams to water the local cattle and population. By June 1948, he was able to report the digging and sinking of five wells and successful supply of water to locals. He attempted to make land (on government-owned plots) available for small agricultural holdings; he also attempted to negotiate with a shipping firm from Liverpool, to begin a line of refrigerated steamships to carry the colony’s tomato and fruit crops to the United Kingdom. Finally, he hoped to start a small industry in the use of bagasse (the fibrous mater that remains after sugarcane stalks are crushed to extract their juice). Today this is used as a biofuel and in the manufacture of pulp and building materials. 7 Baldwin also initiated house building in the All Saints district of Antigua. 8 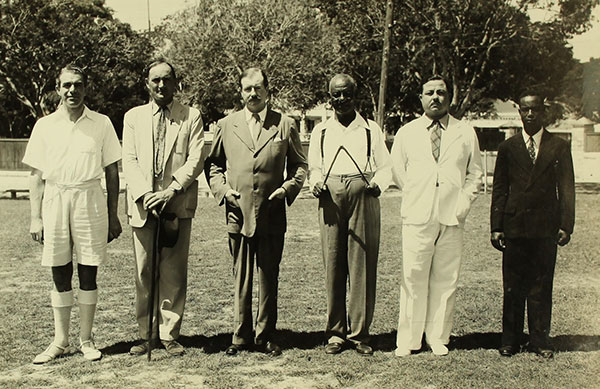 Baldwin wanted to introduce adult suffrage for the election of members of the Legislative Councils (property qualifications and nominations were the norm), and changes in the financial deposit required of candidates. He also wanted the introduction of a ‘committee system’ on specific policy areas.

In the area of industrial relations, Baldwin would face his most difficult challenge and discover that both parties – trade unions and planters – had their own agendas. On the islands these were continually linked to the profits made from sugar and the redistribution of wealth among the ordinary people. On one side were the sugar planters, represented on the islands by Alexander Moody Stewart, head of the Sugar Planters Syndicate, and in London by the West India Committee. On the other side men like Vere Bird and Robert Bradshaw of the Trades and Labour Union.

Baldwin had mediated during several strikes in the first three months of his governorship, but the viability of the industry during this period was always in question with employers pressuring their workforce to accept low wages and conditions. Ideas about nationalising the industry on the islands were also mooted, which unsurprisingly brought opposition from the plantation owners.

During his recall to London, Baldwin spoke to several newspapers, before meeting Creech Jones, his minister. Defending his conduct, he argued that his overall concern was for social and economic progress and the creation of a new spirit of cooperation, creating a cohesive community.  Evidence exists that senior civil servants had briefed against him for being unconventional and not answering routine communications. 9  Creech Jones allowed him to return, outlining that he should devote more time to administration and reform some of his unconventional ways. On ‘palm Wednesday’, 23 March 1949, Baldwin was greeted by an estimated 18,000 crowd of Antiguans, who proclaimed him the ‘People’s Man’. 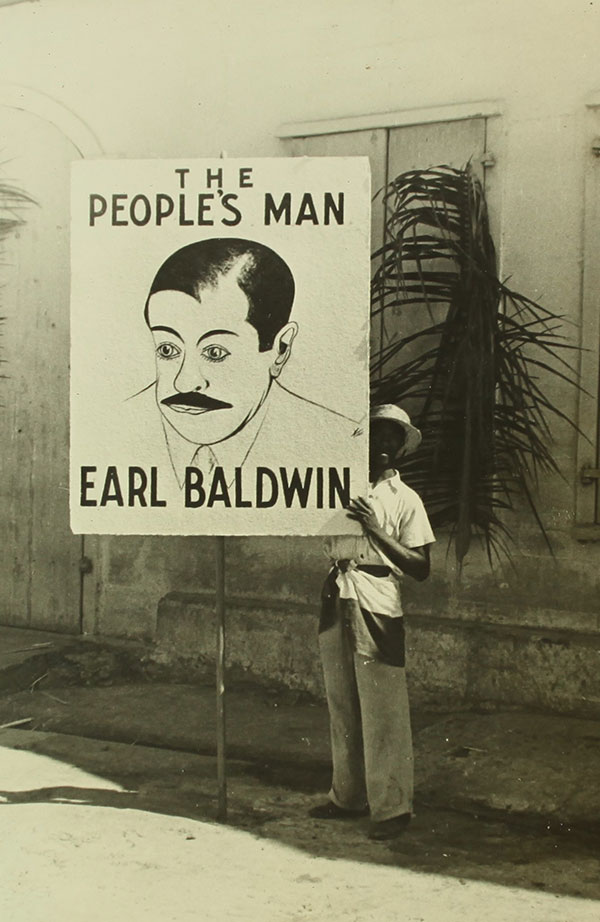 Baldwin announced his resignation from the Governorship of the islands in May 1950 due to exhaustion and ill-health, just two years and three months into his tenure. The brevity of his term might be an argument for sticking with a more conservative, steady-as-she-goes professional in the role of Governor. However, this would overlook his achievements – his determination to mediate in strikes, to provide relief from ingrained poverty by providing a secure water supply, his support for cultural initiatives and social engagement among all the social classes. Above all, it seems that he strove to foster a path towards a more just and equitable society.

I would like to express my profound gratitude to Dr Barbara Paca, OBE, and Mr Jules Walter, who have been so generous in sharing their time and research with me. This blog post has been made possible through their support and their unique insights.

caribbean, caribbean through a lens