Shining a light on a glass lantern collection

The OS 51 series is a fascinating one. It consists of a mixture of paper maps and plans as well as almost 1,000 glass lantern slides, including images which were to be used on the cover of maps or booklets produced by the Ordnance Survey, as well as images of how the maps were created.

Three of the glass lantern slides

Glass lantern slides (also known as magic lantern slides) consist of a photographic image sandwiched between two square pieces of glass. The sandwich is then bound around the outside with a gummed tape, usually black. They were invented in the late 1800s and would have been used in a lantern slide projector to project the images for entertainment or educational purposes. 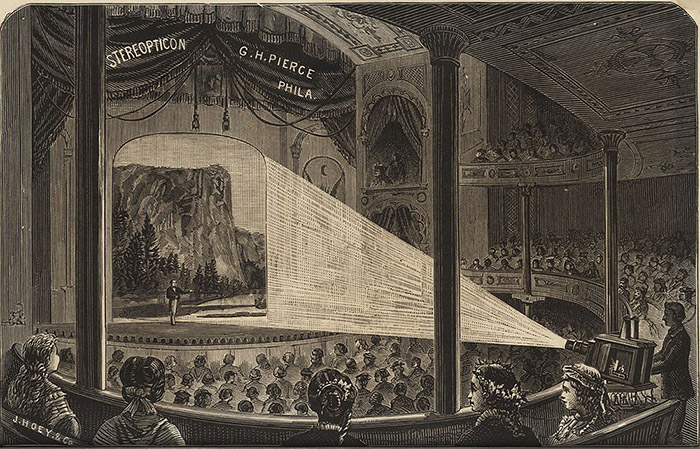 Image from a book from 1888 of a magic lantern in use (image: Wikimedia Commons)

When the slides came to the archives they were housed in a wooden chest of drawers with up to 400 slides in each drawer. While this was a very unique and attractive way to house the slides, it made it very difficult for readers and staff to produce them. The drawers were extremely heavy and the glass slides were wrapped in a tissue, so it was hard to locate the slide you wanted without carefully unwrapping each one to check the image. 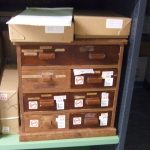 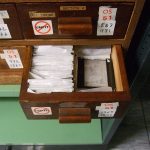 A detail of the condition of some of the drawers

When a sample survey was done of the slides, we found that several of them were also damaged, some with cracks in the glass and other with parts of the glass completely missing.

Collection Care decided last year to rehouse the slides so that they could be more easily produced in the reading room. We also wanted to stabilise the broken slides so that readers and staff were protected when handling them.

Each slide was cleaned, housed in a small folder with the slide’s reference written on and then put in a specially constructed box, with slots to accommodate ten slides in each. This meant that the slides would no longer lean on or rub against each other. It is also now possible to see the reference of each slide without having to remove them from their slots, so you can easily locate the one you want! 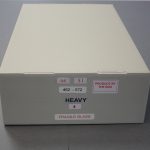 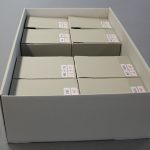 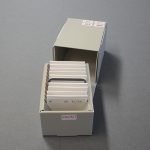 The box used to store the glass lantern slides, ten at a time

For the broken slides, we found a technique which would allow each slide to maintain its unique appearance and function, but would protect it from future damage. After doing some research and testing a few different options we decided to use a very thin plastic sheeting to encapsulate the damaged slides. This would replicate the structure of a sandwich of two clear layers of plastic sheeting with a dark tape around the edges. The plastic sheeting was much thinner than the glass used by the slides. This helped to reduce the amount of bulk added to the slides, so that the repaired ones could be stored in the same boxes as those which did not have this treatment. 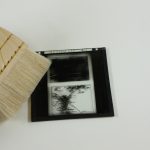 The glass slides were gently cleaned using a soft-haired brush 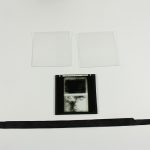 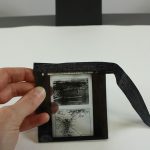 This repair turned out to be very successful. It was easy to carry out, in keeping with the visual style of the slides themselves and can easily be removed without interfering with the slides within.

They can now be easily accessed and enjoyed!