Opening up our prisoner of war collection

In December 2014, the Ministry of Defence transferred to The National Archives the series of records WO 416 consisting of an estimated 190,000 records of individuals captured in German occupied territory during the Second World War, primarily Allied service men (including Canadians, South Africans, Australians and New Zealanders) but also several hundred British and Allied civilians and a few nurses.

The series also includes several thousand records relating to deceased allied airmen, whose bodies were found by or near to their aircraft which had been shot down. To some degree, these act as a record of death as the individuals were never prisoners of war as such.  The number of cards for each individual varies from one to fifteen, but in most cases there are just one or two.

The records are in the form of cards and they record (with certain exceptions) a varying amount of detail which can include the following:

While the majority of the cards are of Allied service personnel, many cards relate to Merchant Navy Ratings, Merchant Navy Officers, South Africans, Palestinians, New Zealanders, and Australians, and a limited number of cards are of individuals of American, Norwegian, Chinese, Arabic, and Cypriot origin.

There are also a number of cards for individuals who are listed as ‘unknown’ at WO 416/415-417. The entries on these cards are written in German only (and are usually noted as English with a blue cross).

Cards show details of deaths by use of symbols such as black, blue and red crosses; there are pink cards created when prisoners received medical attention while captive.

Cards for some service personnel are missing as they were taken out of the collection to be used as evidence to support the claims made by Prisoners of War after the end of the Second World War. In most cases, the card was placed on the claim file and not returned to this series. These cards may form part of personnel’s service records, still held by the Veterans Agency.

The entire series has been closed: since the collection was accessioned in 2014 it is is not catalogued by name of individual as many may still be alive – we believe that the youngest of them was born in 1928. The collection can contain sensitive information about living individuals so, with the support of volunteers, we have started to catalogue the entire series: this enables us to open records for those born more than 100 years ago or where we have proof of death.

This ambitious project will continue until the end of 2021 and for the main we are working our way through the series alphabetically by surname. This page, under ‘Arrangement’, provides a link to the projected completion stages of the project, subject to change. Fifteen per cent of the collection has now been catalogued by name of individual; we have loaded this information on Discovery so researchers can access the material on site or arrange for digital or paper copies to be sent to them. We are offering a paid search service for uncatalogued pieces for those who do not want to wait until the project has completed: details of this service are available at piece level descriptions in Discovery.

Please note: as we are cataloguing the series, although cards are arranged in boxes according to alphabetical groupings, we are discovering some that are misfiled and can be found in pieces with descriptions outside their surname range. Very occasionally, cards for the same individual can be found in multiple boxes.

One of the first items we catalogued was for the film actor Peter Butterworth, who would later become famous for starring in a number of films (including some of the Carry On series, such as ‘Carry on Camping’, in which he played Joshua Fiddler, the laid-back camp site manager).

During the Second World War he served as a lieutenant in the Royal Navy Fleet Air Arm. In June 1940, while flying in an attack on the Dutch coast, his plane was shot down and he was captured on the island of Texel. As a prisoner of war he was eventually sent to Stalag Luft III, near Sagan in Poland, later to be the scene of the Great Escape, immortalised in the classic 1963 movie starring Steve McQueen. It was a compound of huts accommodating allied officers, including non-commissioned officers and members of the Fleet Air Arm.

Butterworth played his part in helping prisoners escape but reputedly, when he later auditioned for a part in the 1950 film ‘The Wooden Horse’, based on another escape from the camp, the film-makers considered him ‘unconvincingly heroic or athletic enough’. 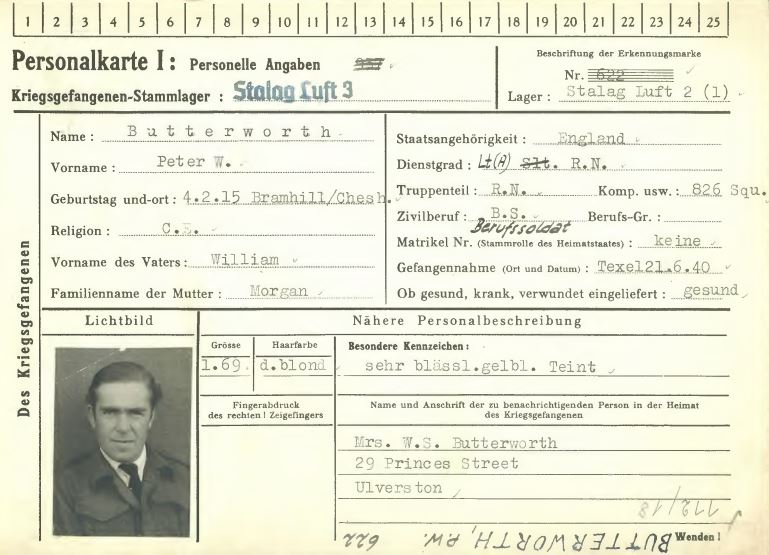 Also held captive in Stalag Luft III was RAF Squadron Leader Roger Joyce Bushell. He had been captured at Boulogne in May 1940. He became part of an escape committee alongside other prisoners including Wing Commander Harry Day and  Fleet Air Arm operator Jimmy Buckley (WO 416/45/154).

Sadly, Bushell didn’t survive the war, being captured and executed following his escape. As for Buckley, his body was never found following his escape attempt on 21 May 1943. The part of Bushell (WO 416/47/197) was famously played by Richard Attenborough in the film ‘The Great Escape’. 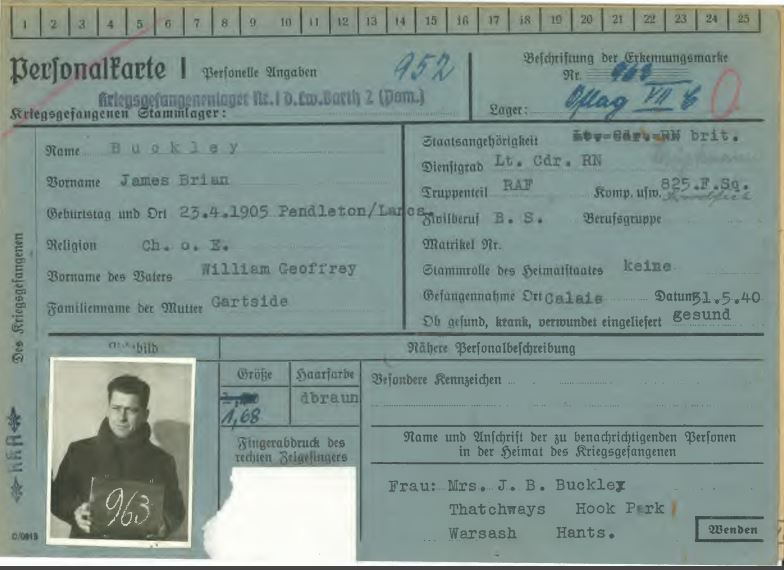 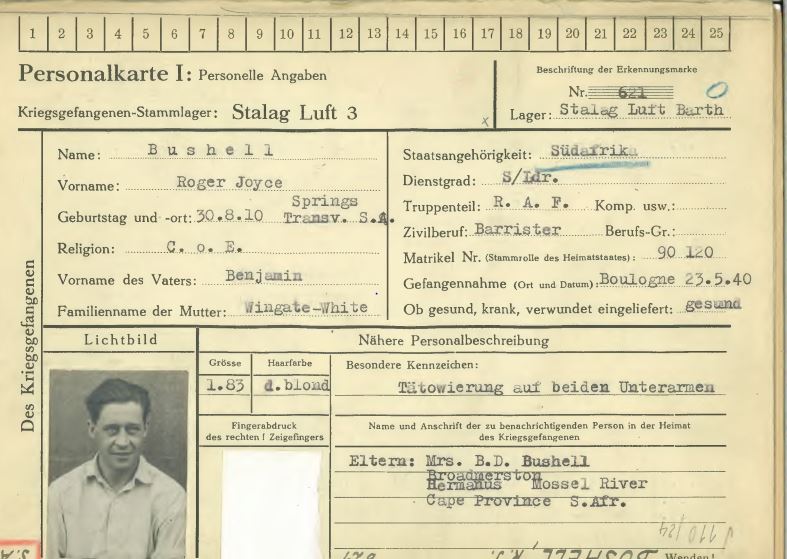 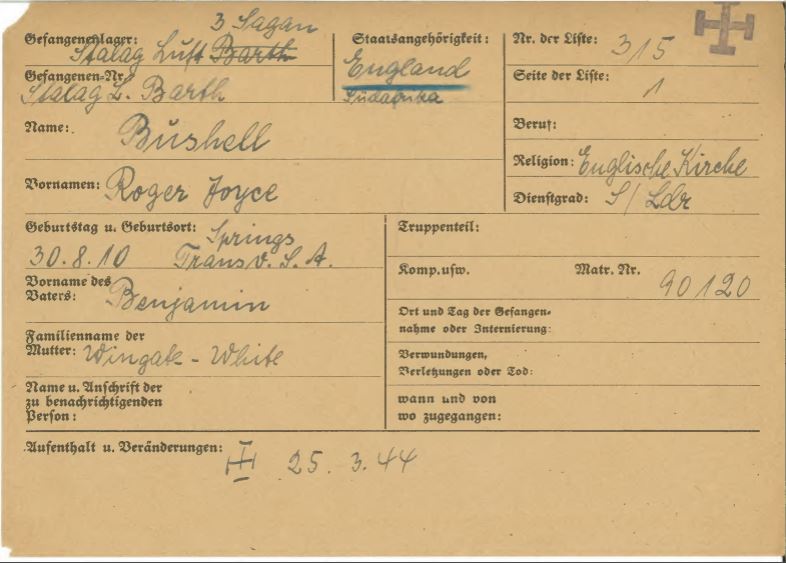 This collection complements other series of records held at The National Archives and helps to paint a vivid picture of what life was like as a prisoner of war. Other relevant records include escape and evasion reports in WO 208, which give individual accounts of escape attempts or capture, or awards for those who assisted escape attempts. Series  WO 344 includes questionnaires completed by liberated prisoners of war who had been held captive by the Germans or Japanese. These records are arranged by nation (Germany or Japan) and then alphabetically; WO 208/5437-5450 for special questionnaires made by individuals about work of escape committees, escape aids, German Censorship and collection of geographic information which might assist future escape attempts; and selected lists of British and Commonwealth prisoners of war in WO 392/1-26.