‘One Whole Lemon’ and a visit from The Rainbow Club

On Friday 12 April The National Archives welcomed more than 60 children, parents and teachers from The Rainbow Club. The Rainbow Club is a supplementary school, part of Action for Refugees in Lewisham (AFRIL), that works with children aged between four and 11 from refugee and asylum seeker backgrounds. They are committed to raising achievement in English and Maths. In addition, they provide creative outlets for students and promote a curiosity for learning. The Rainbow Club is a warm and welcoming place, as my fellow Education Officer Kathryn Collins and I found when we delivered two workshops there.

As this was their first Rainbow Club trip by coach and inaugural visit to The National Archives, there was much excitement! By the time students reached the revolving doors of the archives they already knew the types of ‘treasures’ we kept. However nothing could prepare them for the vastness of the repositories. On our tours led by Thomas Radley and Karen James, there were audible ‘ooos’ and ‘ahhs’ when it was revealed that the shelving measured more than 200 kilometres. Asked about his favourite part of the tour one student commented ‘definitely the huge roll maps, not the flat maps’. A technical but important distinction! 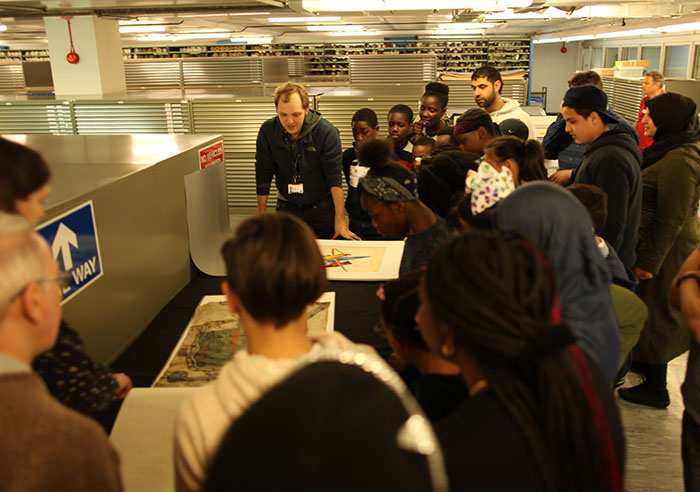 The Rainbow Club on their tour of the repositories

Children had the opportunity to vote in advance for the topic that they investigated on their visit. One of the groups voted for investigating ‘food’ in the past. There were heated debates about the nature of the mystery document (CRIM 1/683). Is it a ‘burnt cake’ or a ‘date’? The original document with the envelope titled ‘One Whole Lemon’ was revealed. Used for invisible ink by a German spy during the First World War, this is one of the many unexpected documents in our collection. Students then explored a range of food-related documents including a list showing ‘36 larks’ being ordered for a banquet for Henry VIII’s court (E 101/96/31). 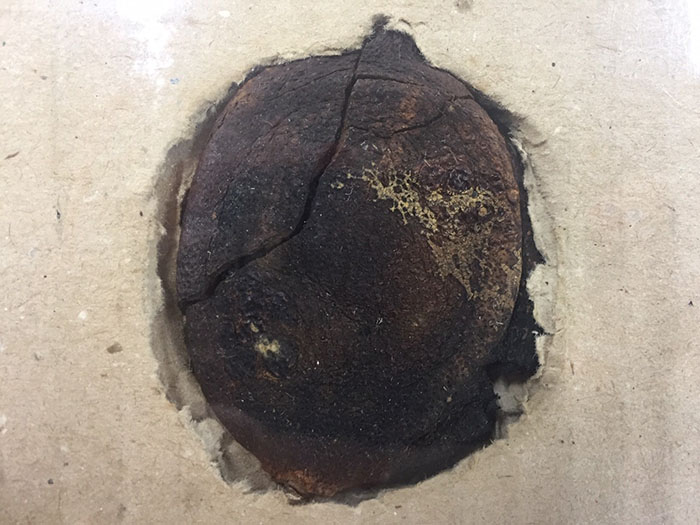 Another group voted for learning about ‘fun’ in the past. Students had great ideas about what a crowd could be watching in the mystery document (WORK 25/208). A ‘boxing match’ or perhaps the ‘circus’. After it was revealed that they were viewing people on the fairground ride, many wanted to try it out! Students were surprised that people in the past were much like us and enjoyed playing cards, eating, dancing and even playing with Lego!

While older classmates were investigating original documents, Rachel Hillman and Emily Morris were running an immersive storytelling session for younger students. Inspired by creatures found in our collection, they went on a magical ‘curious creatures’ safari. They encountered elephants (in COPY 1/377), Peta the Home Office cat (HO 223/43), sea monsters (in MPF 1/68) and insects (in COPY 1/157)! They used lots of sensory props such as water sprays, cat-ears and organza fabric and music to make the documents come to life. The children were so excited about going ‘under the sea’ that they started climbing all over their backs and putting shells in their hair!

This is a great example of archival documents being used in an inventive and creative way, and demonstrates that archives can be accessible to all age groups. A teacher from Rainbow Club commented ‘the children were so engaged the whole time and the activities were perfect for each age group’. It was brilliant to see all children, regardless of age, engaged in documents and confident in the building. One of the parents said ‘we enjoyed our time so much. They really looked after us’.

Hopefully this group of students now feels that these are their archives, and will continue to be curious about the past. As a memento students decorated their own treasure boxes to take away. They selected a mini-version of their favourite document to keep inside. 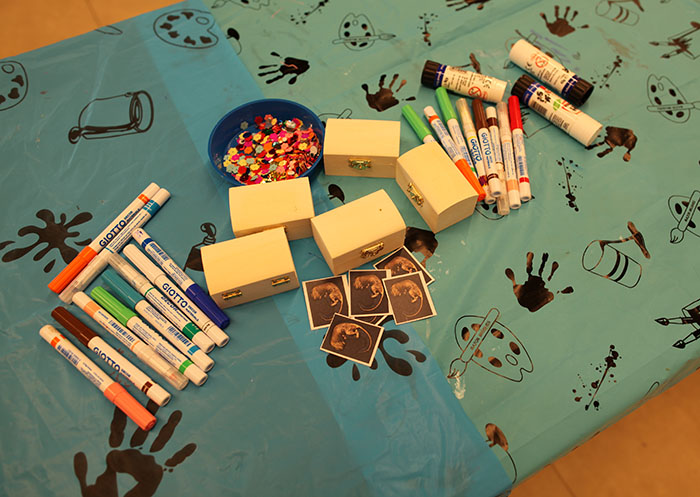 A treasure box waiting to be decorated and filled with ‘documents’

It has been wonderful to see their thinking about what a ‘treasure’ is shift since we first met in September. They now recognise that a document doesn’t have to be gold and shiny to be considered treasure – even an old rat or a 100-year-old lemon can be special enough to put in a treasure box!

If you are working at a supplementary school and would be interested in collaborating with The National Archives, please email educationenquiries@nationalarchives.gov.uk.