This is the second in a two part series marking Women’s History Month. To celebrate, we asked colleagues across The National Archives to tell us about their favourite records relating to women, resulting in an eclectic mix of everything from a medieval queen to a design for an inflatable corset!

Earlier this month my colleague Vicky blogged about some of the personal stories that were selected, while I am going to take a look at some of the choices that illustrate the ‘official voices’ that appear in relation to women. As Vicky discussed in her blog, many of these documents could be considered both personal stories and official voices, but we have chosen to divide them in this way for the purposes of these blogs.

The suffrage question is commonly associated with women’s history, particularly in an archive of government, and examples of both personal stories and official government views appeared in the staff selection. Melinda Haunton from our Archives Sector Development department chose CAB 27/336, Equal Franchise 1926-1927 which contains the discussions of the Cabinet Committee debating equalising the franchise.

The Committee reviewed what equal franchise might look like, betraying fears of a both young and female vote. For example, they considered raising the voting age for men to 25, thereby cutting the number of young people in the electorate, or having the votes of everyone over 30 counted twice. Melinda said:

‘This is a fascinating document for what it shows about anxiety about youth as well as about women… It’s also the original reason that women under 30, and non-property-owning women can vote whereas now I think the Equal Franchise is sometimes thought of as inevitable … For me, this is the most symbolic step towards gender equality the UK ever made.’ 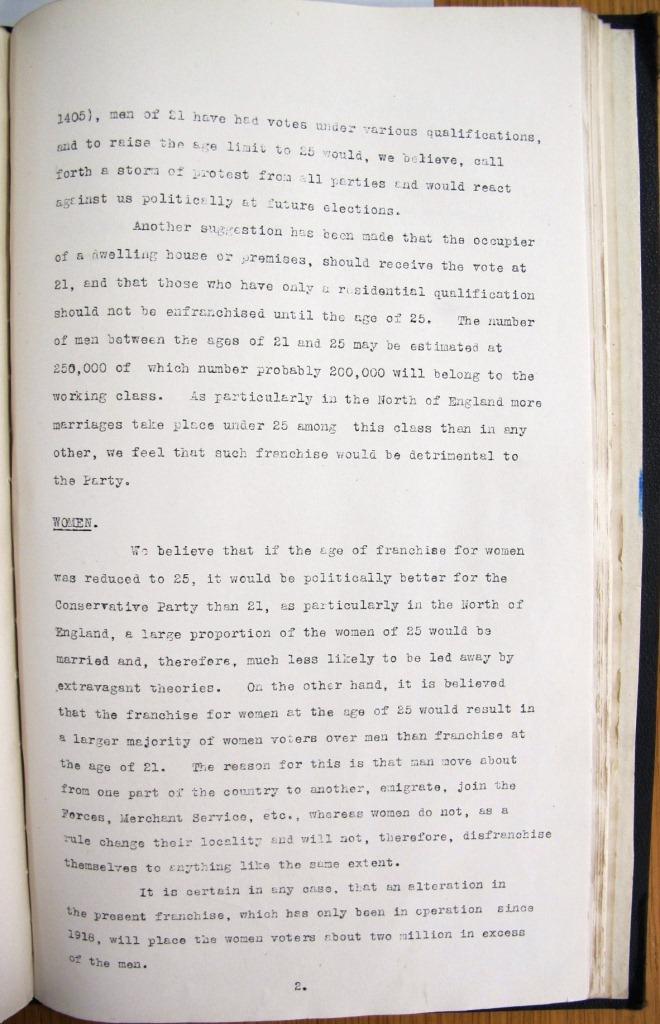 Along the lines of women’s empowerment, Kate Jarman and Sally Hoult from our Advice and Records Knowledge department both chose documents showing government depictions of women’s contribution to the war effort during the First World War. 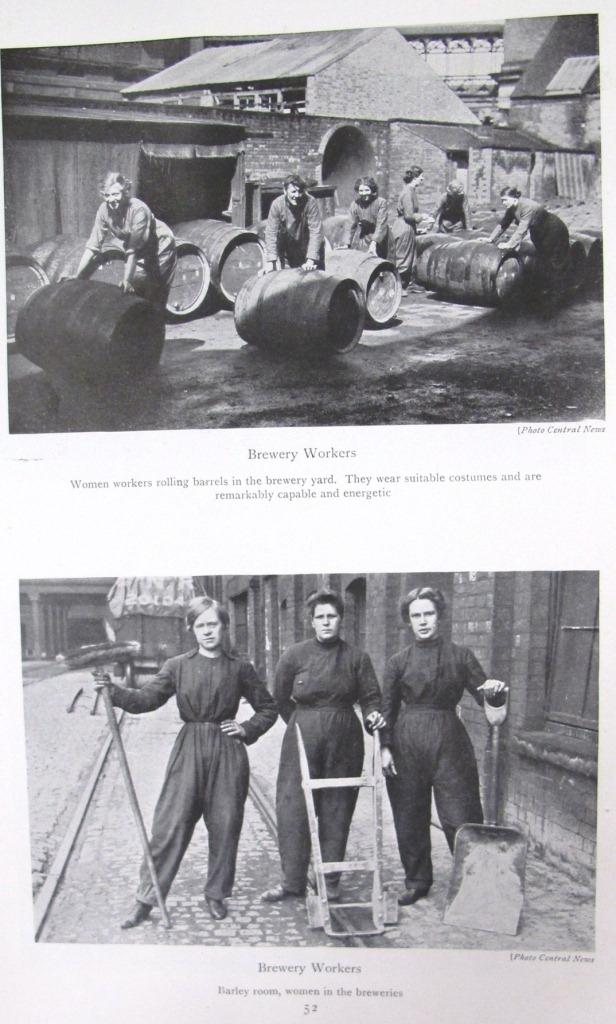 Kate chose pamphlets on women’s war work in MH 47/142/1, which is available to view online through Discovery. These pamphlets were included in the papers of the tribunal in Middlesex for men appealing against conscription. The pamphlets originally provided information for those on appeals panels as to the work women were able to undertake and thus the workforces from which men could be replaced. Kate said:

‘The impact of the First World War on the experiences and freedoms of women was huge… Though some women eagerly volunteered take on new and traditionally male roles, others were forced to leave education and take up work. I think it’s a particularly interesting period because of the way it ushered in universal suffrage and the breakdown of traditional social hierarchies, and radically altered the life expectations of thousands of women left mourning a lost generation, who would never go on to the kind of married family life most had been brought up to expect.’

Alongside these, Sally chose NATS 1/1308, one of the posters calling women to contribute through joining the Land Army which you can see at the top of this post. ‘I really like this image ‘God speed the plough and the woman who drives it’. It is a wonderful iconic design, very powerful and simple.’ The Women’s Land Army initially developed in 1915 out of earlier organisations including the Women’s Legion and the Women’s Defence Relief Corps. Posters were used to entice women into this war work, which was often seen as less glamorous than other forms of war work.

Zoe Glanville in our Document Services department chose HO 45/2345, which contains a copy of a letter concerning prison discipline from Elizabeth Fry and F Lieber. Elizabeth Fry was a Quaker who became famous for her work to reform the prison system in Britain in the early nineteenth century. By her example she inspired other women to play a fuller role in society. In 1817, she founded an association to help women inmates. Her work became well known and led to the setting up of Ladies’ Committees in Britain and in Europe. She also achieved important changes in the treatment of prisoners sentenced to transportation to the colonies. Zoe describes her choice:

‘I chose Elizabeth Fry for the display because she made the lives of those in prison a lot cleaner and healthier and re-educated some of them to begin life outside the prison, which for the time and for a woman to undertake that role is an inspiration that many should take to heart.’

I couldn’t finish this post without including the choice of the partially inflatable corset by Julie Halls from Advice and Records Knowledge, featured in design register BT 45/30/6400. Over the nineteenth century women’s dress moved from the high-waisted, loose fitting Empire line to shapes requiring corsets. Julie describes the purpose of the corset:

‘Moral attributes went along with the wearing of a corset: ‘the corset is an ever-present monitor indirectly bidding its wearer to exercise self-restraint; it is evidence of a well-disciplined mind and well-regulated feelings.’ Corsets restricted a woman’s movements and the range of activities they could take part in – only demure exercise was possible… Towards the end of the century the Rational Dress Society began to campaign against the clothing endured by women, which could restrict their movement and deform their bodies. There was a gradual move towards more comfortable clothing, but the wearing of corsets continued well into the twentieth century.’ 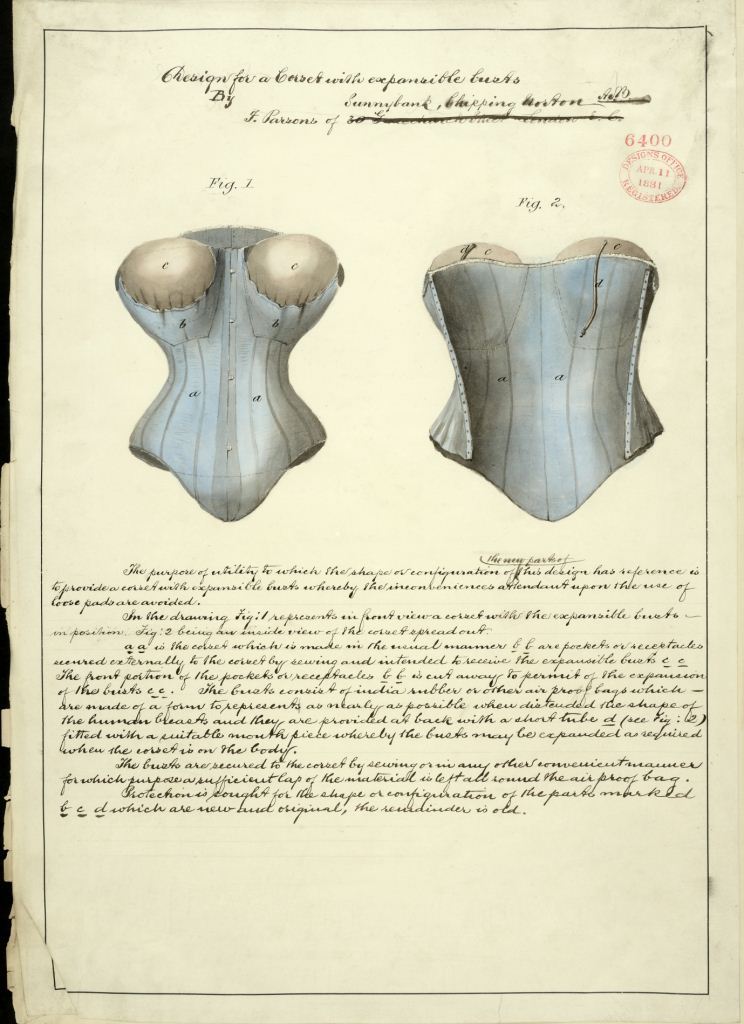 I would love to have heard what women made of it at the time!