New Zealand and the Somme

The Battle of Flers-Courcelette began 100 years ago today, and of the many battles that encompassed the 141 day Somme Offensive, it is perhaps best remembered as the engagement that saw the introduction of the tank by the British Army.

However, today’s blog will focus, much like my previous blog on South Africa and the Somme, on recognising the contribution and story of the troops of the New Zealand Division to the costly and controversial offensive that features so prominently in our narratives of the First World War. 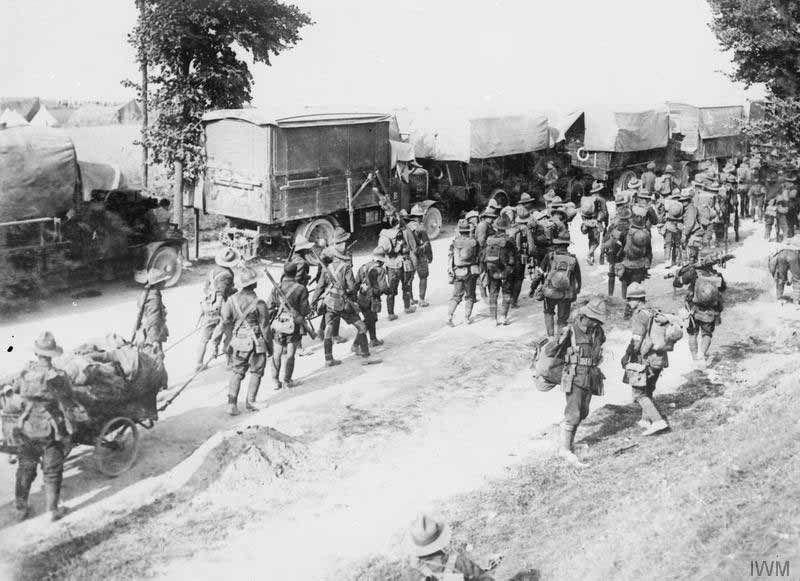 New Zealand is a commonwealth nation that endured the hardships of the Great War, alongside the United Kingdom and other commonwealth countries. It is important therefore as historians and those interested in the conflict to highlight the wide scope of experience in what truly was a world war.

The indication of the global scope of the war is neatly demonstrated by the story of the New Zealand Division prior to serving on the Somme. The New Zealand Expeditionary Force was formed in August 1914, initially as a volunteer-only military body. It had served in Gallipoli and was part of the evacuation of the peninsula in January 1916. In contemporary terms, the distance between Wellington and the Gallipoli peninsula is over 10,000 flying miles and the distance from Gallipoli to the Somme is a further 1,300 flying miles. The men of the New Zealand Division were an incredible distance away from their homes and families.

The Battle of Flers-Courcelette (which took place between 15 and 22 September 1916) was a comparative success, in that the British and Commonwealth troops, together with their French allies, met some important objectives and shook the German defences for the loss of fewer casualties when compared to other aspects of the Somme Offensive. On 15 September itself the 2nd New Zealand Brigade, which included the 2nd (Otago) and 2nd (Auckland) Regiments started ’30 seconds before zero hour’ and pushed through machine gun-fire from High Wood. The 2nd (Otago) Regiment helped capture the important operational objective of the Switch Line and were digging in sixty yards in front of it by 6.50 1

Despite the 2nd (Otago) Regiment making good ground on the morning of 15 September, the war diary for the unit (WO 95/3703) indicates that it was by no means easy and the resistance they encountered was severe. The war diary states that ‘officers and men soon began to drop as far as I can judge from machine gun fire’ and ‘there is little doubt that some were hit by our own shells’. As with all things relating to the Somme Offensive of 1916, the loss of life was significant and the endurance required to cope in these circumstances is hard to comprehend. 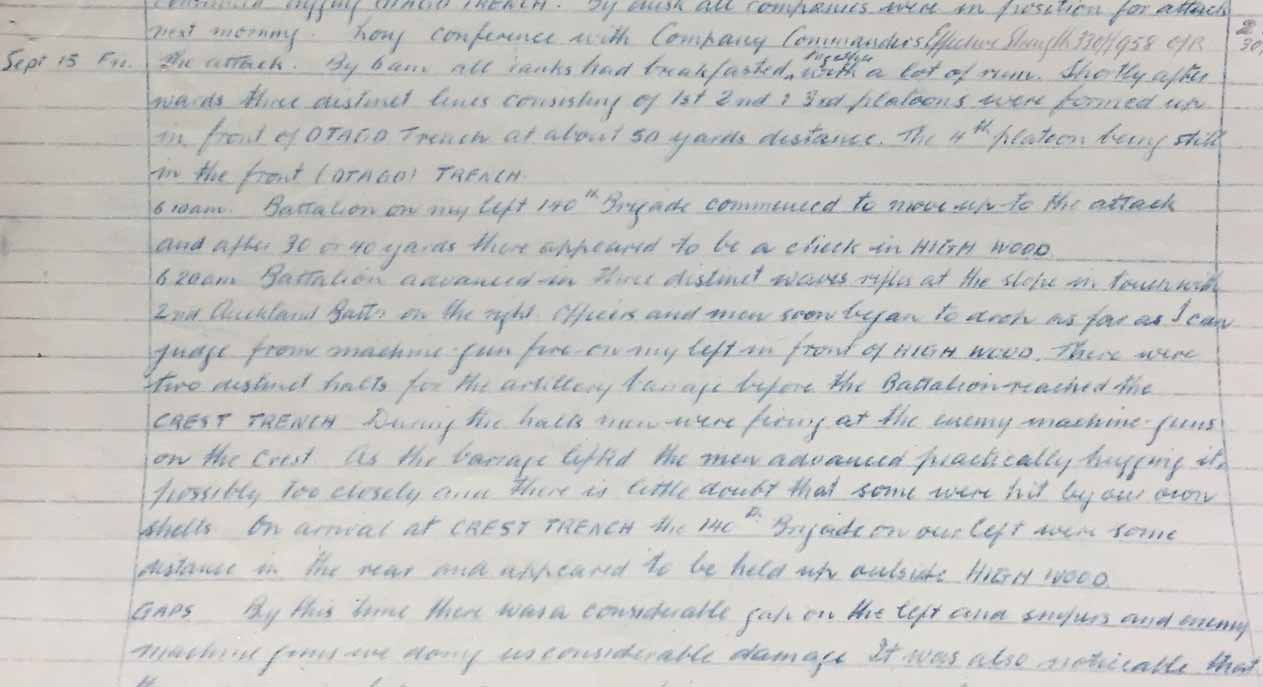 Drawn as I am to recipients of the Victoria Cross and their stories, the tale of one Dunedin-born non-commissioned officer jumped out at me as I delved into the actions of the 2nd New Zealand Brigade – as the New Zealanders made their Western Front debut. Serjeant Donald Forrester Brown (8/3504) of the 2nd (Otago) Regiment, a farmer from the South Island of New Zealand, would be Gazetted for the Victoria Cross in June of 1917. He appeared in the London Gazette in no small part due to the immense bravery and leadership he showed in the face of the enemy on 15 September 1916, as his regiment fought to capture the Switch Line.

His entry in the London Gazette, reads as follows:

‘For most conspicuous bravery and determination in attack when the company to which he belonged suffered very heavy casualties in officers and men from machine gun fire. At great personal risk this N.C.O. advanced with a comrade and succeeded in reaching a point within thirty yards of the enemy guns. Four of the gun crew were killed and the gun captured. The advance of the company was continued till it was again held by machine gun fire. Again Sjt. Brown and his comrade with great gallantry rushed the gun and killed the crew. After this second position had been won, the company came under very heavy shell fire, and the utter contempt for danger and coolness under fire of this N.C.O did much to keep up the spirit of his men. On a subsequent occasion in attack, Sjt. Brown showed most conspicuous gallantry. He attacked singlehanded a machine gun which was holding up the attack, killed the gun crew and captured the gun. Later, whilst sniping the retreating enemy, this very gallant soldier was killed.’ 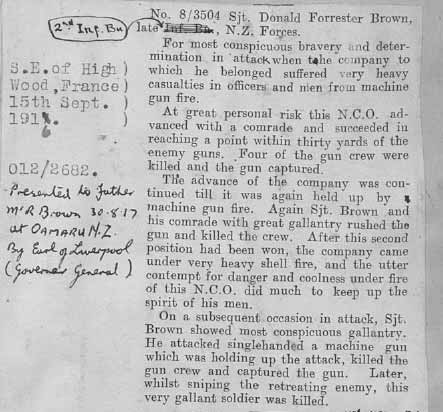 Even among the most incredible descriptions of gallantry that make up the citations from the First World War and other conflicts in the London Gazette, Sjt. Brown’s is a particularly breathless account to read. Time and again he displayed leadership, decisiveness and valour. Sjt. Brown’s example could only have been inspiring to the men of 2nd (Otago) Regiment, and his fellow New Zealanders, as they fought a formidable foe so far away from their homes. A version of Sjt. Brown’s citation can be seen in our WO 98 Victoria Cross Registers that are available to download online from our website, Discovery.

It is of interest to note, when researching the heroics of Sjt. Brown, that the only man in history to receive a Bar to the Victoria Cross for combat operations (the other two recipients of the VC and Bar were medical doctors who were commended for tending to wounded men under fire) was also a native of New Zealand – one Captain Charles Upham of Christchurch. However, Captain Upham would live through the Second World War and did not die until 1994. As the citation in the London Gazette confirms, Sjt. Brown died performing one final act of gallantry in 1916. He fell on 1 October 1916, less than three weeks after the start of the Battle of Flers-Courcelette and the first of his noted feats of gallantry. He was 26 years old. Today Sjt. Donald Forester Brown is one of 18,063 records of New Zealand personnel to feature on the Commonwealth War Graves Commission’s roll of honour from the First World War.

The first day of the Battle of Flers-Courcelette, 100 years ago today, marked the entry of New Zealand troops on the Western Front. It should not be forgotten that they also fought at Gallipoli in 1915, alongside their Australian and British cousins, and the sacrifice of this commonwealth nation should never be forgotten as we study and mark the First World War.

To mark the centenary of the Somme Offensive we’re posting a series of blogs exploring the contribution of certain Commonwealth nations to the infamous land battle that has so dominated our perceptions of the British Army during the First World War. We’ve explored the soldiers of Newfoundland on 1 July, the Indian Cavalry at the Battle of Bazentin Ridge, and the South African Brigade at Delville Wood in mid-July 1916. This November will see the final blog in the series discuss the Canadian troops during the last days of the Somme Offensive.