New resources for A level and GCSE history teachers

The National Archives Education Department has been very busy this summer: we have created a selection of new resources which we hope will make your life easier in the classroom.

These online resources feature a series of themed document collections, introduced by historical experts and accompanied by teachers’ notes, with links to the history curriculum.

We have two online lessons supporting the new GCSE courses, in particular those which specify study of the historic environment. We also have a new lesson on Richard II for those studying A level and in need of resources.

For A and AS level students and teachers we have tapped into areas of the curriculum around 19th century protest and the fight for democracy with two new themed document collections, as we found few original sources already available online for schools.

Similarly, those schools following specifications including the English Reformation or the Holocaust will now be able to access a large number of significant original records unavailable in textbooks.

We have also recently published a new document collection relating to Indian soldiers’ experience of the First World War, still a neglected perspective in many narratives of the conflict.

Other themed collections will follow early in the New Year. These will include a fantastic group of documents examining the reign of James I, who features substantially in the A and AS level specifications; there will also be a document resource covering the Russian Revolution from the perspective of the British government.

This set of documents from The National Archives’ collection is introduced by expert on the period, Dan Stone, Professor of Modern History at Royal Holloway, University of London. According to Professor Stone, these documents readily lend themselves to analysis of the Allies’ actions and inactions and other questions, such as why were survival rates of Jews so different across Europe? Or how did the victims of the Holocaust understand what was happening to them and what did they do to try and alert the ‘free world’? 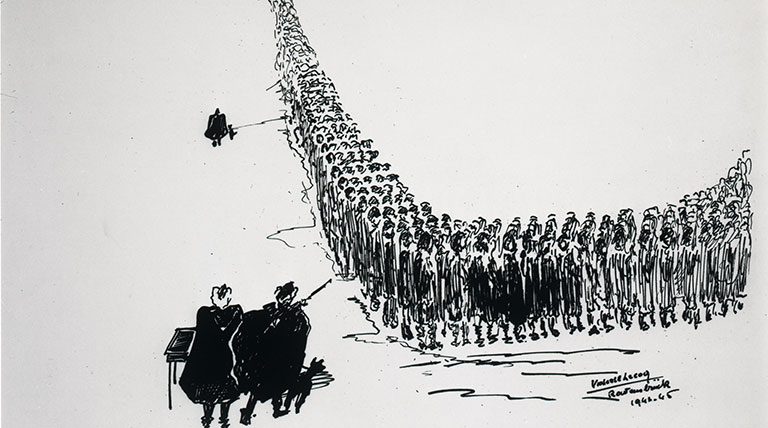 This extract from a note sent to prisoners at Marshalsea Prison in 1816 (catalogue reference TS 11/200) gives a flavour of the social discontent and growing radicalism during the period of the Napoleonic wars.

It is one of 25 documents which support the exploration of a time of petitions, unrest and armed protest. Students can learn about the ‘Blanketeers’, who marched to London to present their case carrying blankets to keep them warm for the journey. Dr Robert Poole from the University of Central Lancashire introduces the collection.

…Englishmen who were never Born to be Slaves, arise from your slumber and throw off the Yoke of Tyranny and Oppression. Free yourselves from that Immorality which has paved the way for Corruption and with sorrow do we relate taken its permanent seat not to be removed unless the People in a body rally round the Tri Coloured Standard which will be raised and unfurled amidst Thousands on Monday the 2nd of December 1816.

The second part of this collection explores the turbulent years following the Napoleonic wars. Through more than 40 original documents we concentrate on the events of Peterloo in Manchester and the 1820 Cato Street conspiracy in London.

There is also material revealing serious unrest in Yorkshire and armed insurrections in Ireland and Scotland. Students could use the documents to write a critical analysis of events at St Peter’s Field or explore the reasons why the Cato Street Conspiracy remains a footnote in history – unlike the Gunpowder Plot.

Here is an extract of from the earliest eye-witness account of events at Peterloo (catalogue reference HO 42/192 f207). 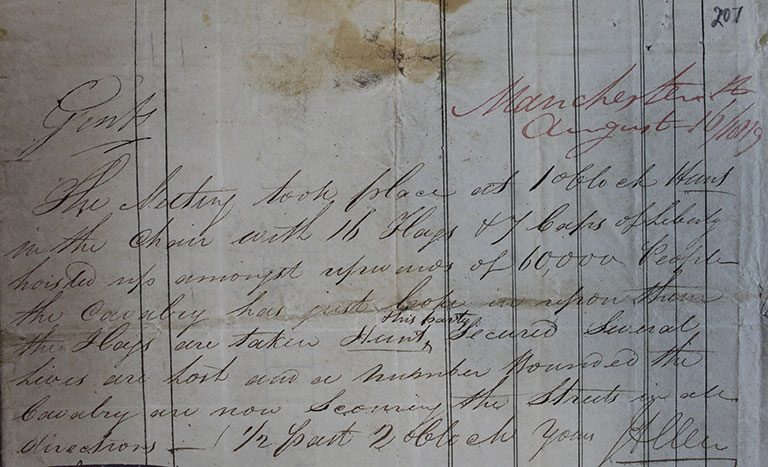 The meeting took place at 1’o clock. Hunt in the chair with 16 flags and 7 caps of Liberty hoisted up amongst upwards of 60,000 people, the cavalry has just broke in upon them, the flags are taken, Hunt and his party secured, several lives are lost and a number wounded. The cavalry are now securing the streets in all directions, ½ past 2 o’clock,

Our new online resource is suitable for A level students studying Richard II for OCR’s or AQA’s GCSE History thematic study, Britain: Power and the People c1170 to the present day.  We make available a selection of interesting medieval documents which capture the nature of Richard II’s monarchy, placing emphasis on his minority, personal rule and overthrow.

The records include ancient petitions, extracts from Parliament rolls and royal grants, and offer students a chance to develop their powers of evaluation and analysis – such as this extract from the appeal of the Lords Appellant, February 1388 (catalogue reference C 65/47, m.8):

… false traitors to and enemies of the king and kingdom, perceiving the tender age of our said lord the king and the innocence of his royal person, so caused him to believe many falsities devised and plotted by them against loyalty and good faith, that they caused him to devote his affection, firm faith, and credence entirely to them, and to hate his loyal lords and lieges, by whom he ought rather to have been governed…

The Reformation was one of the most transformative events in the history of the British Isles. It profoundly changed people’s religious beliefs, and also ushered in important political, constitutional, social and cultural change.

As this is an evergreen topic in the school curriculum and for the exam boards, we have published a resource for Key Stages 4 and 5. Students and teachers can use extracts from unique documents to follow their own lines of historical enquiry on different aspects of the Reformation across the whole Tudor period, from Henry VIII to Elizabeth I.

This collection of documents focuses on the original State Papers held at The National Archives: the records have been selected and introduced by Dr Natalie Mears at Durham University.

…to make a true and just account thereof, remitting the choice of them to him and you. Touching punishment of heretics me thinketh it ought to be done without rashness, not leaving in the meanwhile to do justice to such, as by learning would seem to deceive the simple, and the rest so to be used that the people might well perceive them not to be condemned without just occasion, whereby they shall not understand the truth and beware to do the like, and especially within London, I would wish none to be burnt without some of the councils presences, and both there and everywhere good sermons at the same…

This online lesson, using archival records concerning Framlingham, examines the primary functions of the castle as a symbol of military might and centre of local government.

This online lesson looks at how these imposing landmarks shaped and influenced people’s lives in medieval times. Key stage 4 students can examine the status and significance of several castles through documentary evidence.

This resource is a must for anyone studying modules in the historic environment of Medieval England with AQA and OCR at GCSE. 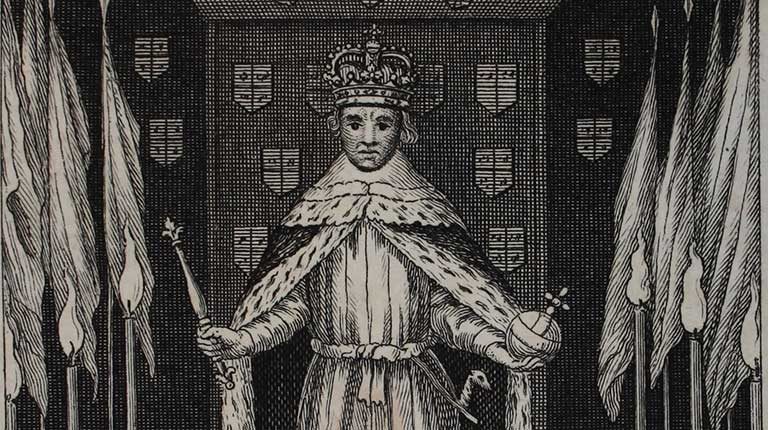 Council have received informations that there was very wilful and strict observation of the day commonly called Christmas Day, throughout the cities of London and Westminster, by a general keeping of shops shut up; and that there were contemptuous speeches used by some in favour thereof.

Through our records, this lesson offers a glimpse of the world of the Protectorate when England was a republic: our resource features original documents written by people who directly observed and reported on the events of the time.

In addition to puritan attitudes towards the celebration of Christmas, the lesson examines martial law, Cromwell’s foreign and domestic policy, and the restoration of the monarchy in 1660. There is also material relating to Charles II’s court in exile.

This resource supports the new GCSE courses for Key Stage 4 and the National Curriculum in history at Key Stage 3 covering the development of Church, state and society in Britain 1509-1745.