On 29 September 1939 the National Register was taken throughout the UK, Isle of Man and the Channel Islands. Meticulously detailed plans were rolled into action, and the civilian population was enumerated in a single sweep.

Of course, that is not quite true; no operation, however well planned, goes entirely according to that plan. But this one went as smoothly as anyone could have hoped.

The object of the exercise was to create an accurate register of everyone in the country on registration day. Serving members of the armed forces were not included, with the exception of service personnel on leave.

Unlike the earlier attempt at National Registration in 1915, everyone was to be included, from new-born infants to the very old, and foreigners and visitors as well as natives. Like the census, everyone was recorded where they happened to be on 29 September, even if that was not their normal residence; many people were enumerated in hotels, boarding houses, hospitals and other institutions. Many young children were not at home on registration day because they had already been evacuated from cities to the countryside in early September. Newspapers reported a rush of hop-pickers heading back to London to be at home for registration night, but many remained in the Kent countryside and were enumerated there.

There was widespread publicity on posters, handbills and in the press, and on the day itself the Registrar General for England and Wales broadcast to the nation on the BBC Home Service. He reassured the populace that they would have no difficulty completing the form, which was simpler than the census forms they had completed in the past. He did, however, find it necessary to explain how to work out your year of birth, if you did not already know it, since everyone was asked for their exact date of birth, not their age. From the outset, National Registration was closely linked with food rationing, so he also reminded his listeners that it was their responsibility to leave a forwarding address if they moved before ration books were sent out, some weeks hence.

The taking of the Register for England and Wales was the responsibility of the General Register Office, using its established network of registration officers. They recruited 65,000 enumerators who were instructed to deliver schedules to every household, as their predecessors had done in every census year since 1841. But the next stage of their duties was quite different from that of a census enumerator. Instead of casting a cursory glance at the form to look for obvious mistakes or omissions, he or she had to verify all the details with the householder, on the spot. Next, the enumerator would write out a National Registration Identity Card for every person, issuing unique numbers as they went. 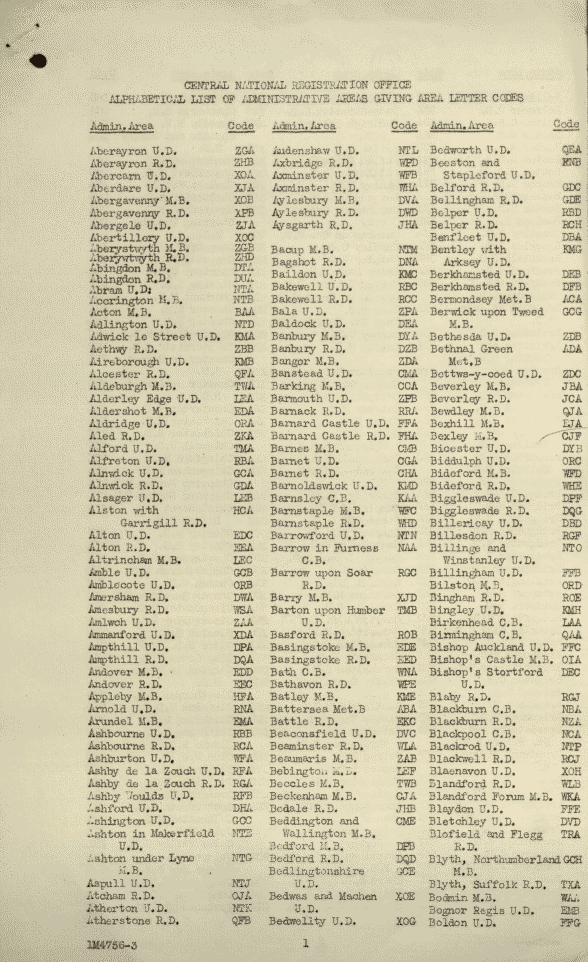 The National Register identity numbers issued by enumerators comprised an area code, denoted by four letters, then two numbers, in the format ABCD 123:4. The first three letters were the area code, starting with AAA in the City of London, and ending with ZZJ in Radnorshire. The fourth letter represented the enumeration district, and the two numbers were the household schedule, followed by the person’s position in the household.

The completed household schedules were collected and returned to each local National Registration Office, but they did not remain there. Each person’s details were transferred to index cards, and the original forms were sent to the local Food Office, for the preparation of ration books. They were eventually reunited later in the war when the National Registration Offices and Food Offices were combined.

Despite all the publicity, and the best efforts of the registration authorities and enumerators, a number of people failed to register on the appointed day, after which they could only register at their local National Registration Office. Some people failed to register because the enumerator had difficulty contacting them to collect the completed forms, due to their working hours, or the inaccessibility of their property – enumerators reported problems of getting to remote farm buildings, and some registered compensation claims for dog-bite injuries. Some people had lost their forms, or spoiled them, and others were missed out because they were on the move, or were deliberately avoiding registration, in the hope that they would also escape conscription in to the armed forces.

Only the first stage

The taking of the register was an enormous and complex undertaking, but it was only the first stage in a bigger operation. On 30 September 1939 it was already out of date; every day babies are born, people die, join or leave the armed forces, enter or leave the country, or simply change address.

Keeping the register up to date had been planned for this time, unlike in 1915, and an elaborate, but effective, system was devised to cope with this, using a combination of national and local registers. A national Birth Register was set up to record every birth from 30 September, and a Current Register for people entering the country, or being demobilised from the armed forces or the merchant navy. Anyone applying for a replacement for a lost or stolen card was placed on the ‘Y’ Register. Identity Card numbers in these registers could be in different formats from numbers issued from the Register taken on 29 September 1939. Many refinements were made over time, including a complete re-issue of cards to every adult in 1943, and the introduction of cards with photographs for certain categories of people.

National Registration finally came to an end in 1952, but the individual numbers it generated became National Health Service numbers in 1948, and remained in use into the 21st century.

The register taken on 29 September 1939 in England and Wales only will be released online later this year by Findmypast.