This month’s ‘My Tommy’s War’ blog post features the fascinating story of the grief of a young woman on hearing of the death of her fiancé in the First World War. This grief was captured in a stunning oil painting by her father, Sir George Clausen RA.

Sir George Clausen was the great-grandfather of Bruno Derrick, who worked in the Advice and Records Knowledge (ARK) department at The National Archives. Sadly, Bruno passed away last year before he could see his blog posted. As a tribute to Bruno and with the agreement of his family, we have decided to post the story he was keen to share.

As with all of our ‘My Tommy’s War’ posts, it is full of details of research, which we hope will help you in researching your own First World War ancestor.

The blog is all in Bruno’s words. 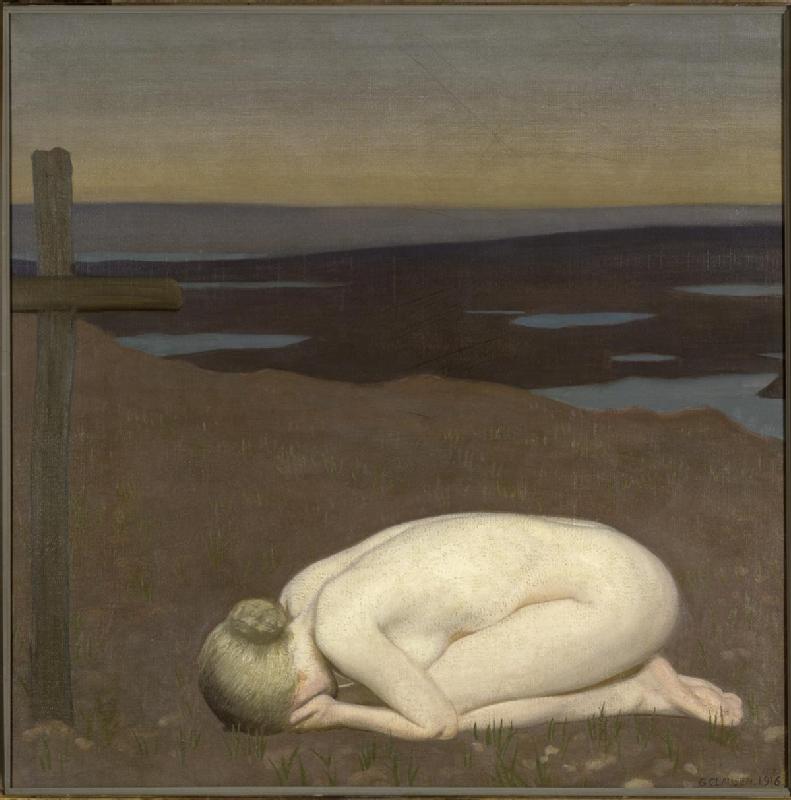 My great-grandfather, Sir George Clausen RA, was the son of a Danish immigrant and he was born in 1852. He became quite a well-known and well-regarded painter in the latter years of the 19th century, specialising in paintings commonly called ‘Rural Naturalism’ which celebrated rustic themes but, at the same time, drew attention to rural poverty and to the fact that country life could be harsh for poor people. Sir George became a member of the Royal Academy and was knighted by the King after the First World War.

The painting illustrating this blog post is entitled ‘Youth Mourning 1916’ and it now hangs in the Imperial War Museum. There is a story behind the painting. My great-grandfather was inspired to paint it because he had been so taken with the grief suffered by his daughter (my great aunt Kitty); prostrate with sadness after her fiancé (Geraint Payne) was killed in the First World War.

Second Lieutenant Charles Geraint Christopher Payne was born in Shifnal in Shropshire on 23 April 1888. He planned to become an architect, but joined the Artists Rifles on the outbreak of war in August 1914. He was commissioned in January 1915, serving as a Second Lieutenant in the 1st Battalion of the Highland Light Infantry. But he was killed in action at Neuve Chapelle on 12 March 1915 and was buried close to where he died. The Roll of Honour describes him as a ‘strong swimmer and keen boating man.’ He was also ‘an excellent ‘cellist and a member of the Hampstead Orchestral Society.’

Second Lieutenant Payne preferred to be called Geraint. His death is recorded on the Commonwealth War Graves Commission website. His service record is in the records of The National Archives and has the reference WO 339/23362. The service record includes a copy of the telegram sent to his parents announcing the death of their son:

His father wrote to the War Office requesting details of the circumstances of his death. At this early stage of the war the Army was prepared to supply this information (although I gather that they did not do this later on). Lieutenant-Colonel Hill of the Highland Light Infantry wrote to Mr Payne:

‘Your son was shot at about 6 am in the head and killed instantaneously whilst looking over the parapet of the trench in which he was with his company.’

The manner of his death, perhaps, reveals his inexperience, for he had only just arrived at the Front. Lieutenant-Colonel Hill added:

‘He had not been long with us, but had endeared himself to all who knew him. He was a capable & zealous officer whose early death we deeply deplore’.

Geraint lived at 8 The Mount, Heath Street in Hampstead, close to where I live now.

The war diary of the 1st Battalion the Highland Light Infantry (WO 95/3929/1) records a day of intensive fighting on 12 March 1915, close to Neuve Chapelle. The battalion suffered heavily throughout the day:

Geraint was killed, probably by a lone sniper, at about this time, but fighting continued throughout the day:

Geraint was awarded the Victory Medal, the British War Medal and the 1915 Star for his war service. These medals would have been issued to his next of kin after the war ended, although not to my aunt because Geraint and Kitty were only engaged at the time of his death. The campaign medal roll shows that Geraint was No. 1724 Private Payne of the 28th Battalion the London Regiment (the Artists Rifles) before his commission.

‘Youth Mourning 1916’ shows a naked figure against a blasted and desolate backdrop. The cross represents the dead of the war; my great-grandfather would have been thinking principally of the British dead, but the imagery can be seen as applying to the war dead of all nations. The painting was given to the Imperial War Museum in 1929.

My great aunt Kitty later married an Irish yachtsman and explorer but she died young in 1936. Sir George Clausen died in 1944.