I was discussing the First World War with a friend and we were talking about what was important to us personally about the upcoming centenary. We agreed that, with so few people from the period still with us, that some stories may be lost forever. This struck a chord with me as I prepared to write my blog post.

Last year, I inherited the war medals of a Mr Brown, the father of my great-aunt Betty’s best friend, Jenny. Until I started my research all I knew about Mr Brown was his surname so I was curious to know more about the man whose medals I now owned. Mr Brown died in 1967 and his daughter Jenny died in 2002, leaving behind notes on her own research into her family history. Mr. Brown has no living descendants – his story could be lost – and I decided that this blog would be a good place to celebrate his life.

I’ve been researching Mr Brown for only a short while so I know there is still a lot more for me to discover, but I’d like to take this opportunity to share his story so far. 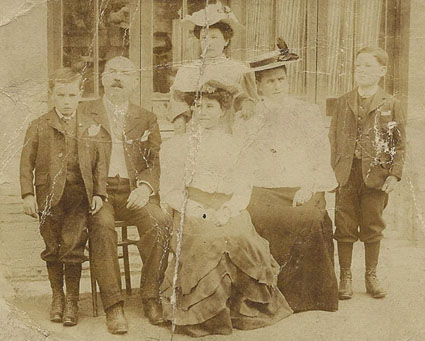 A young Mr Brown (far left) There is no information on the back of the photo but we assume that he is with his father, mother, sisters Jean and Peggy and older brother Adam.

Joseph Vincent Willie Brown was born on 15 March 1898 in San Vicente, Torello, Barcelona. He was the son of Adam Brown and Jeanie Paton who were originally from Paisley, Scotland. His father was employed by J&P Coats, the Paisley thread manufacturers who had factories worldwide. Mr Brown’s birth certificate gives his father’s occupation as a dyer and bleacher but, according to notes made by Jenny, he was a manager in the Torello factory.

Among Mr Brown’s papers is a consular birth certificate issued retrospectively by the British Consul in Barcelona on 12 September 1905. Whether there was ever a Spanish one issued at the time of his birth I do not know.

Sometime between 1905 and 1910 the Browns returned to Scotland. According to Jenny they did not return to Paisley but instead lived for at least two years at Rothesay Hydro (now the Glenburn Hotel).  I have searched the 1911 Census for Scotland and have not yet found where the Browns were living in 1911. With Brown being a very common surname it’s proved difficult to locate the correct records. It is also possible that Jenny’s notes could be mistaken and the family returned to Scotland after April 1911.

Mr Brown was 16 at the outbreak of the First World War. Jenny’s notes indicate that he lied about his age to join up but not knowing how much he lied about his age makes it hard to trace further information. What we do have is a photograph of him in uniform dated 1915 – looking at the picture the first thing that is obvious is how young he looks. The image of a fresh faced young man just brings home how young some of these men were when they went off to fight for their country. The insignia on his cap in this photo shows that he was a member of the Argyll and Sutherland Highlanders. 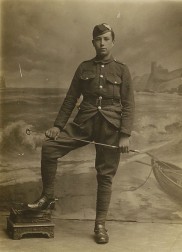 Mr Brown in the uniform of the Argyll and Sutherland Highlanders

Another photograph taken around the same time is a group photo of the transport section of the Argyll and Sutherland Highlanders. The transport section of a battalion would be responsible for moving the field equipment from one field of battle to another. This would be done mostly by horse and the men who rode the horses were known as ‘drivers’.

In the absence of Mr Brown’s service record it is reasonable to assume from the photographs that he was a driver. One of the other surviving images shows Mr Brown on horseback and the earlier picture of him from 1915 shows him holding a rider’s crop. The logical assumption was that he was a driver. What is interesting to note from the photo of the transport section is the presence of a black Shetland pony. According to my research a similar Shetland pony named Cruachan would become the mascot for the Argyll and Sutherland Highlanders in 1928. It is unlikely that this is the same pony as in the photograph but it would suggest that the pony was an unofficial mascot before 1928. This is something I intend to look into further. 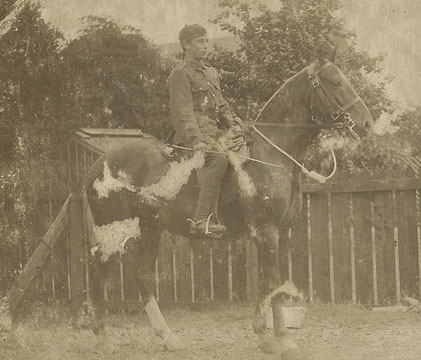 Mr Brown on horseback. This photograph is dated 1915

Jenny’s notes don’t mention much of Mr. Brown’s activities while serving with the Argyll and Sutherland Highlanders. Later photos dated June 1917 show Mr Brown wearing the uniform and badge of the Seaforth Highlanders. This would indicate that he changed regiments between 1915 and 1917 but the exact circumstances of this are still unknown. 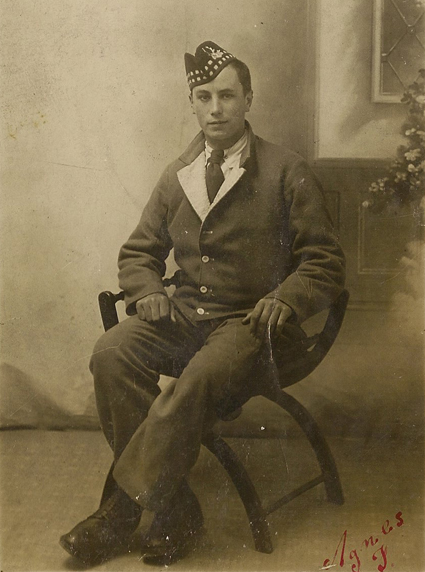 What we do know from handwritten notes on the back of the photos is that Mr Brown had been wounded in France and was sent to a Forces Hospital in the South of England to recuperate. The photograph below is dated 6 June 1917. This photograph, along with Mr. Brown’s war medals, was included in a display at Paisley Museum in 1982. There is a handwritten note on the picture “Agnes J”. As far as I know there was no Agnes in the Brown family and this would suggest that this postcard was sent to a girlfriend. However, Mr Brown later married a woman named Elizabeth, so if this was sent to a previous girlfriend it leaves open the question of how the picture came back into the possession of the Brown family. 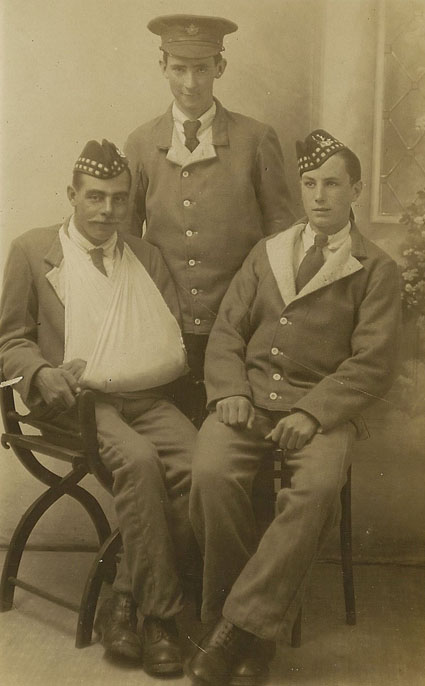 Another photo taken in 1917 shows Mr. Brown with two other soldiers, though who these two men are we do not know. The back of the photo is also dated 6 June 1917 and this photo was sent as a postcard to his mother. Beneath Mr Brown’s message to his mother is a pencil written note: “you can have this one. I’ve got another”. My understanding is that this photo was owned by Mr Brown’s sister Jean and was sent to Jenny when he died in 1967. 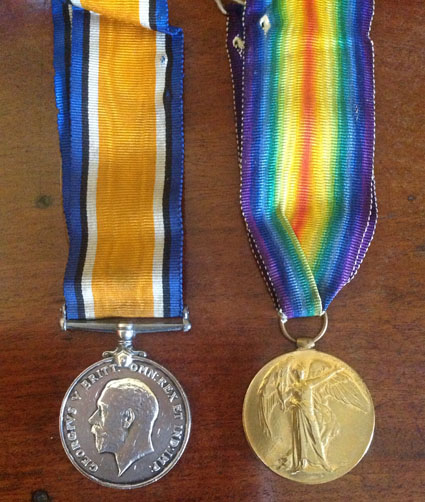 Using Discovery, our online catalogue, I was able to narrow down to five potential medal index cards. I checked through each until I located the correct card in WO 372/3/598757. 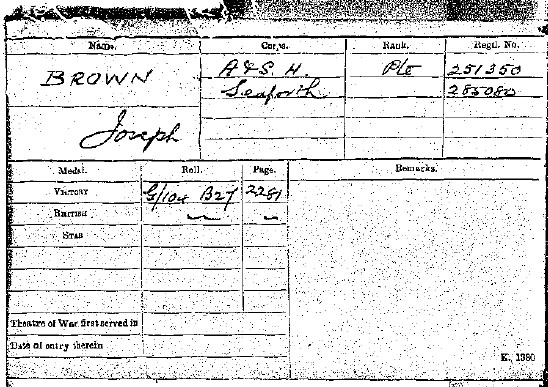 The medal card confirmed what we already knew, that Joseph Brown served with both the Argyll and Sutherland Highlanders and the Seaforth Highlanders. It also tells us on which medal roll to find Mr Brown. Using this information I was able to find WO 329/1651 and using the references from the medal card I found the listing for Mr Brown.

Unfortunately the information from WO 329/1651 doesn’t add anything new. It confirms who Mr Brown served with and that he received the medals.

Further searches of Discovery and of other sites such as Ancestry has turned up little so far. I was unable to locate Mr Brown’s war record but this is not surprising as many army service records between 1914 and 1920 no longer exist as they were destroyed during bombing in the 1940s. At the time of writing I’m still looking for information about Mr Brown and his actions during the war. I know I have only scratched the surface. My research so far has driven home how hard it can be to find information but also how useful the resources can be when used properly, but a lot of time and patience is required.

I’d like to use the blog to reproduce a story that was told by the Brown family and included in Jenny’s family history notes. While there’s no way of proving how true this story might be, it was told by those who were there and with no other family to tell the tale, I’d like to take the opportunity and do so here.

“Serving in the same regimental unit in France, my Uncle Adam assumed the responsibility of ‘looking after’ his younger cousin George.

Unbeknown to them my father had joined the army, having added a couple of years to his age to do so. Serving with him was an older brother of George, who had similarly undertaken the task of ‘looking after’ a younger cousin.

Months later – after a spell at the front – Uncle Adam and Cousin George visited a canteen. During the course of the evening and on seeing two soldiers enter, George exclaimed ‘here comes my big brother.’

When Uncle Adam, whose back was to the door, turned round he saw to his utter disbelief his wee brother was in the company of the cousin. Roughly translated his exclamation was ‘Billy what are you doing here?’

After the war contact was lost between the cousins – that is until 1944 when my father and Cousin George found themselves to be colleagues at the local Army Defence Depot.”

I am grateful to my aunt Margaret who provided me with all of the photos I have used as well as copies of Jenny’s notes. Jenny would have written her family history to share and remember those that she loved and I hope that in my own small way I have made sure that Mr Brown is not forgotten.