I was quite pleased when I was given the opportunity to contribute a post to the ‘My Tommy’s War’ series as it gave me a a great excuse to resume some research my family started a decade ago. 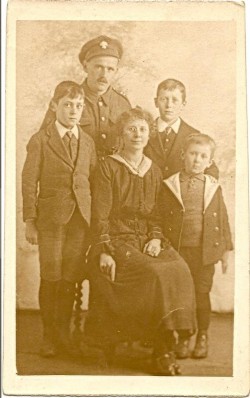 I’m not sure when I first found out that my Great Granddad King, my mum’s paternal grandfather, was killed in the First World War. It’s one of those things that it feels like I’ve always known. I remember taking his medals in to primary school to show the class when we were studying the world wars. As a child I felt sad that my lovely grandad, who was just six years old when his father died, had never really known his father. Some years later my mum showed me a precious album of photographs of the King side of the family which featured the photograph on the left. It shows my great grandparents with their three sons. My granddad, the youngest, is on the right. We think it was taken shortly before great-granddad went overseas and I think you can see the fear and worry in their faces. My mum had learned some details of her granddad’s story from her grandmother. She knew that before the war he worked as a bus conductor and was involved with the Labour Party. She also knew that he was injured while serving abroad and that her grandmother had visited him in hospital in the UK before he died. We were keen to try and find out more. This is the story of how we, two amateur family historians, researched our Tommy’s war.

Our starting point was the details provided on the medals. Great-granddad was awarded two medals: the British War Medal and the Allied Victory Medal. The details impressed on the rims of the medals confirmed his name: Frederick W. King, his rank: Private, his unit: Royal Fusiliers and his service number: GS/36785. Shortly afterwards my mum visited The National Archives (then known as the Public Record Office) and obtained a copy of his medal index card. Unfortunately, the index card did not provide any further useful information and our research stalled.

Several years later I came across the Commonwealth War Graves Commission (CWGC) website. This excellent resource provides a searchable database of the names and places of commemoration of members of the armed forces who died during the two world wars. I was thrilled when I found Frederick’s record as it included some information previously unknown to us. It revealed that he was a member of the 10th Battalion of the Royal Fusiliers, the names of his parents, his address and the date he died. We were surprised to discover that he is buried in Carlisle as we have no other connections with that area of the country. However, the general information about the cemetery provided on the CWGC site explains that  Carlisle was the location of the Fusehill War Hospital so we assumed that Frederick must have died there. My great-grandmother must have left her three young sons and travelled many miles during wartime to be with her dying husband.

The details provided on the CWCG website also helped us research Frederick’s life before the war. As Frederick King was a fairly common name in England in the late 19th and early 20th centuries it had been difficult to find him in most records. Knowing the names of his parents helped greatly with narrowing down our search. At that time the 1841 to 1901 censuses were available online and through some careful searching we found him in the 1891 census, aged 10, living in Fulham with his parents. By 1901 he was still living in Fulham with his parents and his occupation was listed as wood working machinist. His father’s occupation is listed as omnibus driver which was interesting to us given Frederick’s later job as a bus conductor.

We also searched the Ancestry website for Frederick’s First World War service records. Unfortunately, they were among the 60% which did not survive the Blitz.  Sadly, this means that we do not know the date he joined the army, any details about his training or when he travelled overseas.

Birth and marriage records ordered from the General Register Office also helped us fill in more details of Frederick’s story. Frederick married Kate Bailey in September 1905 at Fulham Register Office. The marriage certificate revealed that both bride and groom were living in Fulham at the time and Frederick’s occupation was listed as ‘Messenger (Private)’. Birth certificates obtained by my mum and her cousins informed us that their first child, Frederick Cecil King, was born in 1906 in Kate’s home village of Bottesford, Leicestershire and their second child, Edwin Francis King, was born in Marylebone, London in 1907. Edwin’s birth certificate lists Frederick’s occupation as ‘Mechanical Engineer’.  By the time of the 1911 Census, Frederick, then aged 30, Kate, and their children were living in Chesterfield. Frederick’s occupation is listed as ‘Coal Miner (Hewer)’. Their last child, my granddad, John (known as Jack) was born in Chesterfield in 1912. At some point between 1912 and 1918 the family moved to Seymour Gardens, Twickenham and Frederick began working as a bus conductor. These details seem to paint a picture of a man who didn’t have a trade and never settled in an occupation but did whatever work was available to provide for his young family.

In preparation for writing this post I did some research into the Battalion in which Frederick served: the 10th Battalion of the Royal Fusiliers.  Through some quick internet searching I discovered on the very interesting and useful The Long, Long Trail website that the battalion was originally a ‘pals’ regiment formed of men who worked in the City of London. As a result it was nicknamed the ‘Stockbrokers’. I also discovered that the Battalion originally arrived in France in July 1915.  I also looked at The National Archives’ research guide on British Army medal index cards 1914-1920 which explains that the fact the ‘Theatre of War first served in’ box on Frederick’s medal index card is blank suggests that he first went to France in 1916 or later.

Also, while writing this post I applied to the General Register Office for Frederick’s death certificate. The certificate confirmed that he died at Fusehill War Hospital, Carlisle, and recorded his cause of death as ‘Gas Poisoning (Shell) Bronchial Pneumonia’. His widow Kate was the informant.

In the knowledge that Frederick was gassed I decided to look at the war diary of the 10 Batallion Royal Fusiliers in WO 95/2532 to try and find out when and where he was injured.  Helpfully, the war diary has been digitised and is available online. The diary described in detail a heavy gas attack suffered by most companies of the batallion on 11th May 1918 while they were staying in the village of Foncquevilliers, Northern France. The diary entry reads:

FONCQUEVILLIERS was shelled in the evening, very heavily with H.E. and Gas Shells, mostly gas. Bombardment started at 7.15 p.m. and was very heavy until 8.30 p.m. when it lulled somewhat but the guns (E) kept up intermittent shelling all night.  It is estimated that 10,000 shells fell on FONCQUEVILLIERS and in retaliation we fired 2,100 rounds.

The Commanding Officer, 2nd-in-Command, Adjutant and Medical Officer together with 18 other officers and 300 O.R. went down gassed in the early morning from 2 a.m. onwards.

I wondered whether Frederick was injured in that incident so decided to check how long it typically took for soldiers to die after being gassed. The Wikipedia article on Chemical weapons in World War I suggests that victims sometimes took four or five weeks to die after being exposed to mustard gas which is just a few weeks more than it took for Frederick to succumb to his injuries. I could not find any mentions in the diary of major gas attacks between 11 May 1918 and Frederick’s death on 1 July 1918 so I concluded that he either died a very long and painful death in military hospital or that he was exposed to gas in a smaller incident.

My great-granddad’s story is terribly sad. It was upsetting to read that he experienced the horrors of front line trench warfare and then died a painful and unpleasant death. However, he left the legacy of his three sons which is more than can be said for the many unmarried men who died. The fate of the women left widowed is another topic worthy of research. Frederick’s widow, Kate, continued to live in Twickenham where she became heavily involved in the co-operative movement and left wing politics. After her sons left home she lived alone, being visited often by her many friends and family, until her death at the age of 91. The many interesting stories my mum tells about her ‘Nanny King’ have made me think I might like to do some research into women in left-wing politics in the mid-20th century at some point. 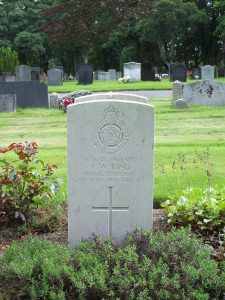 A few years ago my parents visited Frederick’s grave in Carlisle.  Some of her cousins have also visited.  My mum was pleased that her grandfather was at rest in a peaceful and well-maintained cemetery. She took the picture on the right of his grave.  I hope to visit it myself later this year to pay my respects to ‘My Tommy’.