My Tommy’s War: A Sawbridgeworth lad at the Somme

Tracing my great-grandfather in the Hertfordshire Regiment

I’m slightly ashamed to admit in this very public forum that I’ve barely done any family history research of my own since I started working at The National Archives over seven years ago. For the last year or so I’ve been involved in the preparations and planning around how The National Archives will mark the First World War centenary, which we hope to announce later this year. Seeing so many of my colleagues share fascinating stories about their First World War ancestors in this blog has been the prompt I needed to start digging.

I was fortunate enough to grow up knowing both of my maternal grandfather’s parents; they both died when I was in my teens. I remember asking my great-grandfather about his experiences in the First World War for a school project, and that he told me he’d been a stretcher bearer in Ypres. Sadly I haven’t got a clue what happened to the recording I made of our conversation, but next time I have the opportunity to rummage around in my parents’ loft I’m going to try to find it…

Stretcher bearers of the Royal Army Medical Corps (RAMC) lifting a wounded man out of a trench. Painting by Gilbert Rogers. Credit: The Wellcome Library, London

So anyway, on with the research. Armed with a small amount of basic knowledge – his name (Frederick George Saban) and the county (Hertfordshire) – I quickly managed to track him down in the 1911 census. At the time of the census he was 16 years old, living in a small town called Sawbridgeworth with his parents and younger brother and sister and listed as a nursery labourer. As an aside, I was very surprised to see that his father was listed as church clerk and sexton – something to investigate at a later date!

I then turned to military records, using his first/last name, town and approximate year of birth to search Ancestry.co.uk for any matching records. I was very pleased to find quite a few results for him and delightedly started downloading pension and service records for Frederick Saban from Sawbridgeworth. I quickly ascertained that he’d served in the 12th Battalion London Regiment (known as the Rangers), and that he’d served in France between 1915 and 1916, before being discharged as unfit for service.

Then I realised that I was looking at the wrong man’s records. 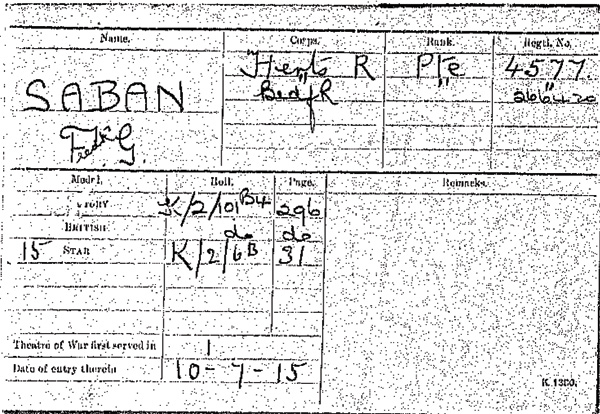 I returned to Ancestry to see if I could find his service and pension records, but drew a complete blank. Unfortunately these must have been destroyed in the bombing raid during the Second World War that wiped out the majority of personnel records from the earlier war, and are lost forever. I did still have the medal index card details to follow up on though. Equipped with the roll and page numbers listed on the medal index card, and using the search boxes in our research guide to records of British Army soldiers after 1913, I managed to find the catalogue references for the medal rolls listed and ordered them up. One of them in particular gave me a little more information than I’d had before, which was that he’d been disembodied (the slightly alarming term used for being discharged from the Territorial Force, rather than the regular Army) in February 1919.

And so the search ends. I know that I’m unlikely to find any more records that provide me with any personal information about my great-grandfather and his time in this war, but I’ve managed to find out some details that my family hadn’t really known before, such as the dates of his service (and particularly that he stayed on beyond the Armistice of 1918). I also learned that his regiment was involved in many of the key battles on this front; I can’t even begin to imagine the horrors that they (and my great-grandfather) would have experienced, but my next step will be to read through the regiment’s war diary in detail. I’m particularly excited about this, as I’ve been involved in the project to digitise the unit war diaries for the centenary. I know that I’m unlikely to find Frederick’s name listed in there, but I hope that the diary will give me a glimpse of the regiment’s activities for the time that he served with them, and go some way to helping me understand his experiences and those of the millions who served alongside him.