Home > Blog > Music in the Archives

Music in the Archives

Following the success of our ‘Behind the Scenes’ repository tours we are currently running tours based on specific themes: this month’s was ‘Music in the Archives’. 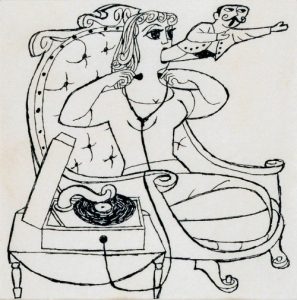 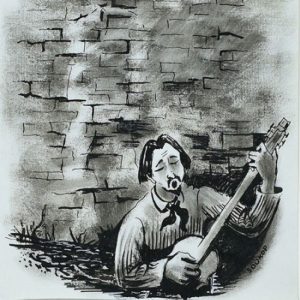 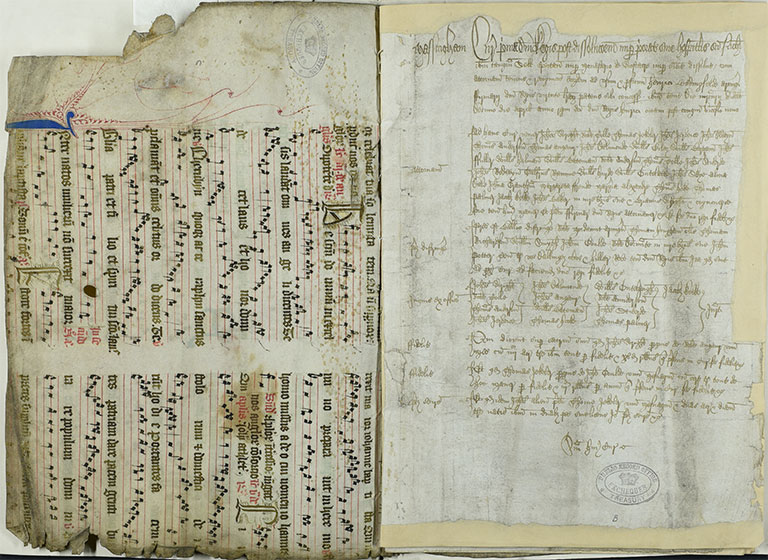 Late possessions of Westacre Priory. Covered with a fragment of an illuminated chant or hymn set to music (catalogue reference; SC 2/193/19)

This document is one of several examples we have here at The National Archives of a musical score being recycled for use to cover another document. Unwanted scraps of parchment and paper were commonly used in the binding of new material, as in this example where a musical score written on robust paper has been used as a cover to protect the more fragile papers within. The document inside is an account of the possessions of Westacre Priory in Norfolk and dates from the mid 1500s. As the illuminated musical score was considered fit for recycling it likely dates from an earlier period than this.

The several signatures on Handel’s will and the codicils added over the course of nine years provide an illustration of his declining health in the final decade of his life. The first example dates from the original will of 1750, made when Handel was 55 years old.

The second signature from six years later shows a marked deterioration, owing to the fact that Handel had been almost entirely blind since 1752, having undergone surgery on his eyes which either failed to work or helped destroy his sight. The surgeon who performed the operations, possibly for cataracts – John ‘Chevalier’ Taylor – was a self-proclaimed oculist infamous for having destroyed the sight of  hundreds of patients, including both Handel and JS Bach.

‘I give a fair copy of the score and all the parts of my oratorio called The Messiah to the Foundling Hospital’ (catalogue reference; PROB 1/14)

The last signature dates from just three days before Handel’s death in 1759. Handel was a major benefactor of the Foundling Hospital in London and extremely popular fundraising performances of his Messiah were conducted there on an annual basis, raising huge sums of money for the charity. In his will he left a copy of the score to the Hospital, enabling them to continue staging the benefit concerts after his death.

Back to the land 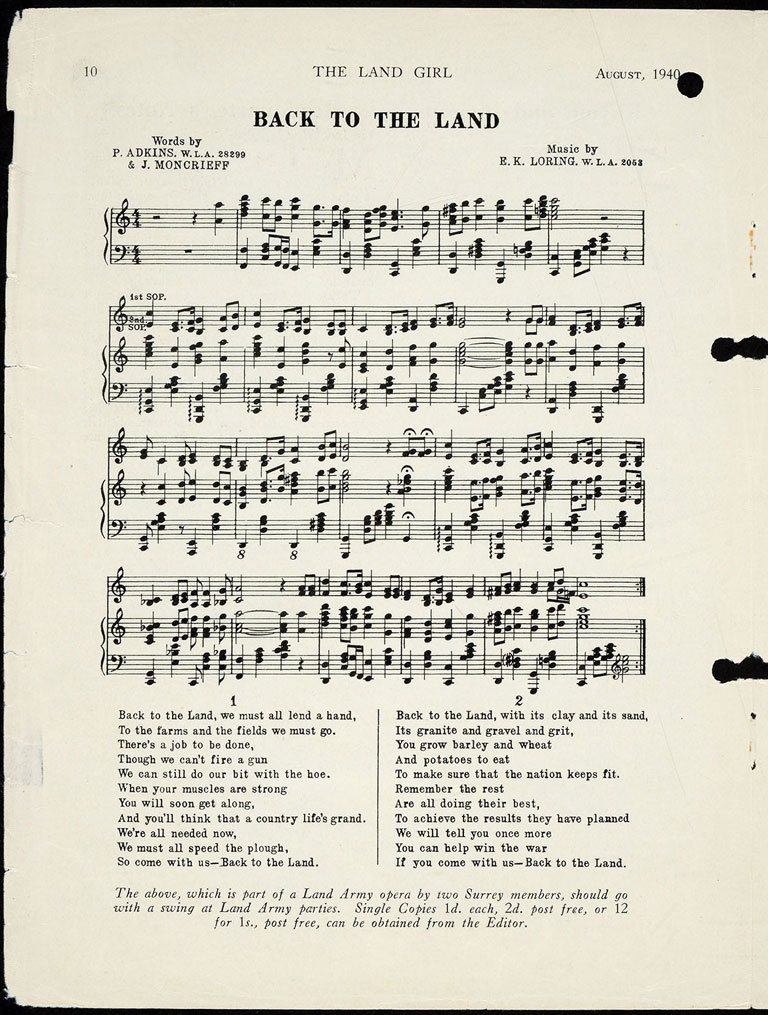 The Women’s Land Army was initially founded late in the First World War and re-launched in 1939. The aim was to fill the thousands of agricultural roles left vacant by men signing up to fight – this was done initially on a voluntary basis and later through conscription.  By 1943, somewhere in the region of 80,000 women were working in agricultural roles across Britain. Whilst some had grown up in the countryside there were many thousands who hailed from towns and cities and were far from home.

The Land Girl was a magazine aimed at these women, many of whom were extremely isolated and carrying out jobs that were entirely alien to them. This score of Back to the Land featured in an issue of the magazine. Written by members, it became an unofficial anthem for the ‘Land Girls’ and encapsulates the aim and spirit of the Women’s Land Army.

Islands in the sun 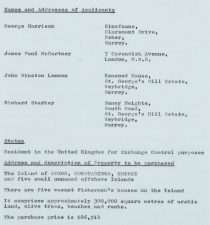 Papers relating to purchase of island of Aegos by the Beatles (catalogue reference; T 295/521)

In the summer of 1967 The Beatles made steps to buy a series of Greek islands where they intended to live and work collectively surrounded by family and friends. With the band at the height of their success and bombarded everywhere with fans and media attention the plan was to create a haven of privacy and creativity, with a central shared island surrounded by individual islands for each of them to live on. The idea eventually fell through, although not before early enquiries were made into the feasibility of the plan.

When I am laid in earth 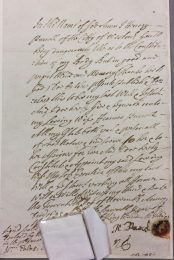 Baroque composer Henry Purcell died in 1695 at the age of 35. Widely regarded as one of England’s greatest native composers, Purcell was a prolific producer of music from his youth onwards, composing both religious and secular pieces and scores of works to be used in the theatre.  The cause of Purcell’s early death is not known, but it certainly seems to have taken him by surprise – his will being drawn up when he was already ‘dangerously ill’ and his very blurred signature likely an indication of his weakness.

‘In the name of God Amen. I, Henry Purcell, of the City of Westminster, gentleman, being dangerously ill as to the constitution of my body, but in good and perfect mind and memory (thanks be to God) do by these presents publish and declare this to be my last Will and Testament…’ 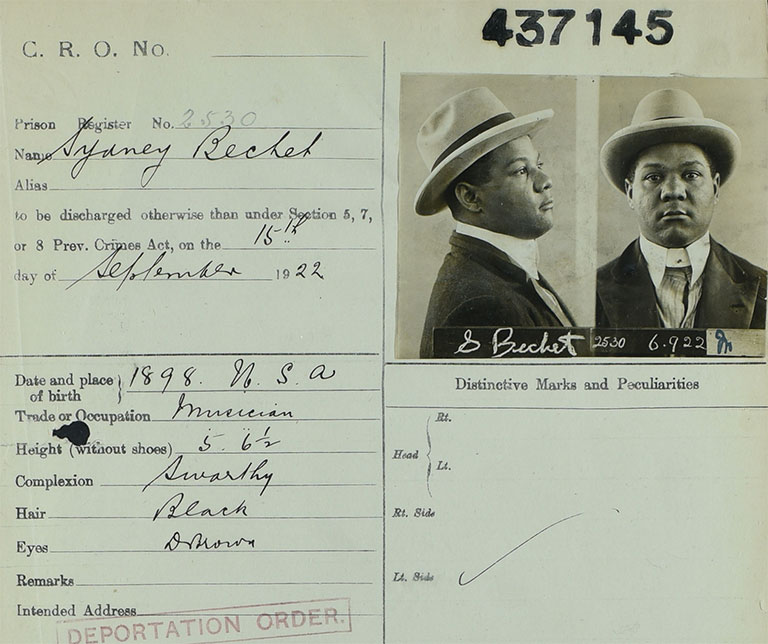 Sydney Bechet is hailed by many as one of the earliest stars of jazz recording. The New-Orleans born clarinetist toured widely from a young age with orchestras, notably the New York Syncopated Jazz Orchestra with whom he came to England in 1919. Their performances in London included a command performance for King George V and Queen Mary.

Bechet’s talent was accompanied by a volatile temperament that got him into trouble on occasion.  This file deals with his deportation from London in 1922 following his conviction for assaulting a woman. A few years later in Paris he was accused of playing the wrong chord by a fellow musician whom the furious Bechet challenged to a duel – at least one bystander was injured by gunfire in the resulting affray and Bechet was jailed for nearly a year. 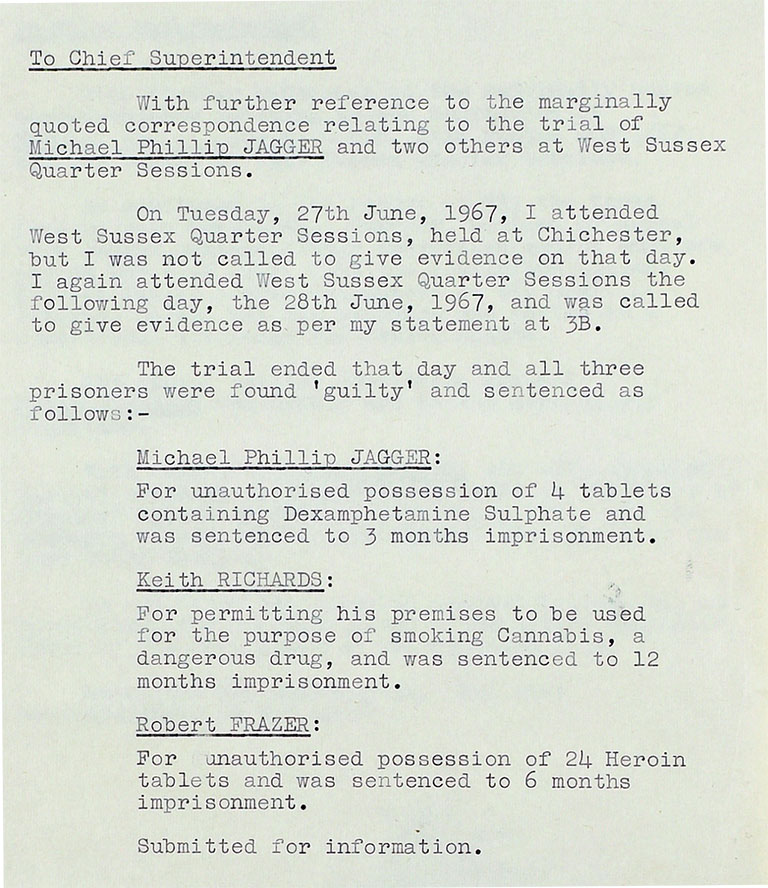 In February 1967 police launched an early-morning raid on Keith Richards’ house where he, Jagger and other friends were staying. The raid uncovered the expected drugs and Richards and Jagger were arrested. The police made it clear from the outset they intended to prosecute, and the subsequent trial was highly publicised.

The eventual sentences – three months imprisonment for Jagger, one year for Richards – were thought to be unduly severe. The pair were released pending appeal and during this time, editor of the Times, William Rees-Mogg (father of Jacob) wrote an article decrying the excessive punishments entitled ‘Who Breaks a Butterfly on a Wheel?’ which greatly increased public sentiment against the convictions. A month afterwards Richards’ conviction was overturned for lack of evidence, and Jagger was given a conditional discharge. 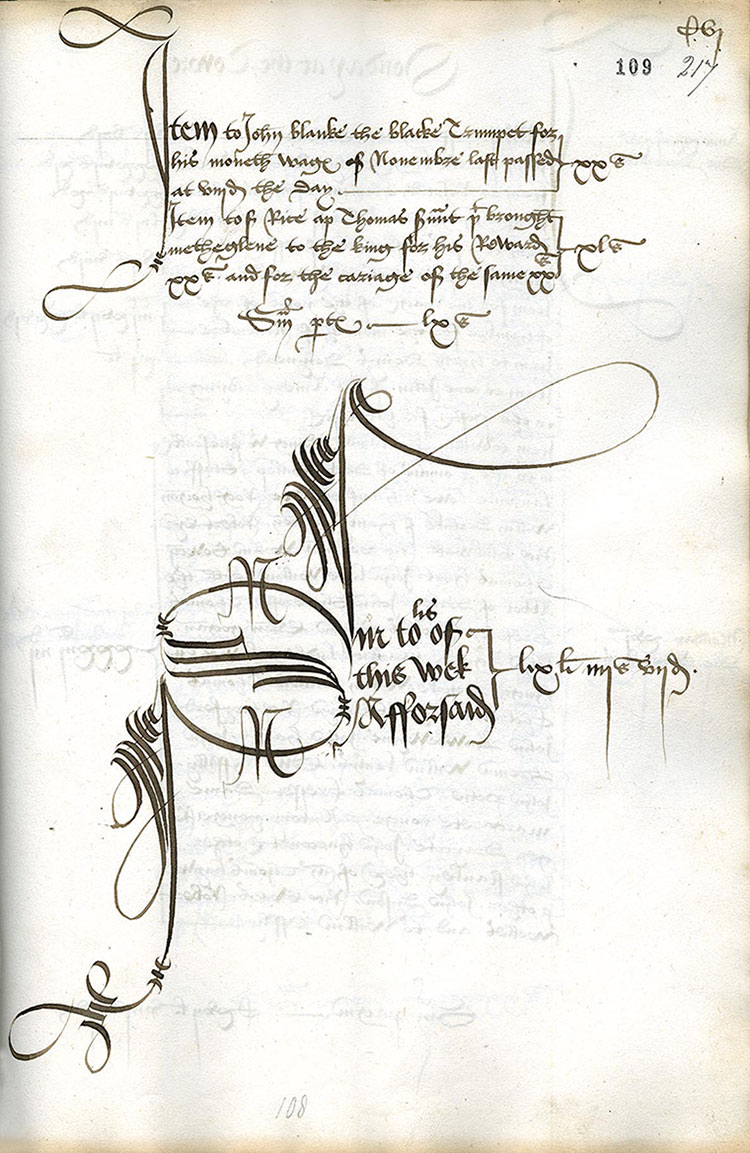 An account book recording wages paid at the court of Henry VII includes this entry for payment to ‘John Blanke the blacke trumpet’ who received 8 pence per day for his services.

It is widely believed that Blanke may have come to England from Spain in the entourage of Catherine of Aragon in 1501, and there are references to him in the accounts of both Henry VII and Henry VIII.

A black trumpeter is also depicted on The Westminster Tournament Roll – an illuminated manuscript made to depict the celebrations that marked the birth of the son to Henry VIII and Catherine of Aragon in 1511, and this is almost certainly a representation of John Blanke. 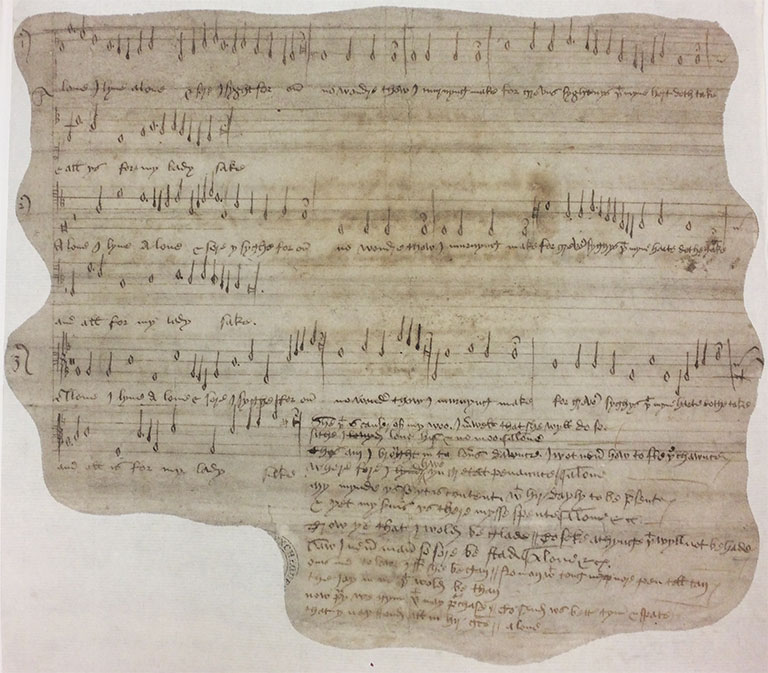 The score and lyrics to a love song in three parts written on the back of a draft inquisition document. The original document dates from 1457 with the song dating from some point in century afterwards. The first verse of the song reads;

‘Alone I lyve alone and sore I syghe for one

No wonder thow I murnyng make

And all is for my lady sake’