The murder of Rasputin 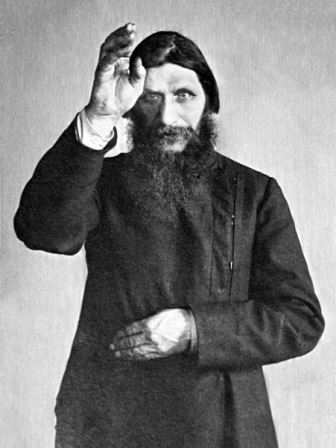 Grigori Yefimovich Rasputin was murdered on this day 100 years ago in Petrograd. The date in the Russian Julian calendar was 17 December, but for the Western, Gregorian calendar it was 30 December.

The lurid details of his murder are well-known, mainly due to the memoirs his murderers wrote about the act. The most famous account was written by Prince Felix Yusupov.

Why was Rasputin so hated?

Rasputin had risen to immense power from humble beginnings. He was born in 1869 in Pokrovskoe, Siberia. In 1892 he had a religious calling and left his family to wander through Russia, seeking spiritual enlightenment. He became known as a ‘holy man’ and drew followers to him. In 1905 he met the royal family and soon became part of their inner circle. He seemed to be able to stop the bleeding of their haemophiliac son, Alexei. How he did this is still not fully understood.

However, Rasputin made enemies because he meddled in politics and got ministers he disliked dismissed. I found evidence of the role he played in getting ‘Monsieur de Sazonow’ sacked from his post as Foreign Minister and the unpopular dismissal of the Minister Samarin, both in FO 800/75.  Rasputin was often described as a conman who was a promiscuous drunkard. In FO 800/178, a memo by Lord Bertie mentions how Prince Orlof tried to explain to the Tsar the danger of the royal family being connected to such a dissolute character and of Rasputin’s ‘boastings’ about being the lover of the Tsarina. The Tsar reacted furiously and refused to receive Prince Orlof again. 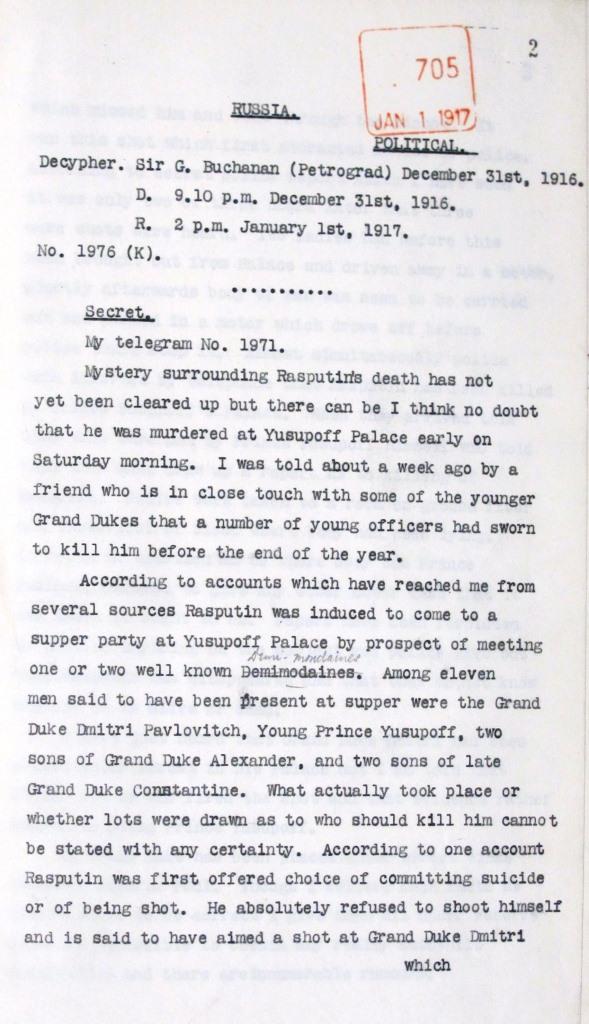 According to Prince Felix’s account, Rasputin was driven to Yusupovs palace on the Moika after midnight on 30 December. In the document FO 371/2994 it clearly states that Rasputin was lured to the palace.

Rasputin went down to the cellar with Yusupov and allegedly ate cakes and Madeira wine laced with poison but suffered no ill-effects. At around 02:30, Yusupov was getting worried. He ran upstairs to his fellow conspirators to tell them the poison was not working. Yusupov grabbed a gun and went down and shot Rasputin in the side. They all thought he was dead.

Pavlovich, Sukhotin and Lazovert then drove back to Rasputin’s home with Sukhotin dressing up in Rasputin’s overcoat and hat to make it look like he came home. Meanwhile Purishkevich and Yusupov stayed at the palace. Again, according to Yusupov when he returned to the cellar Rasputin opened his eyes and screamed. He jumped to his feet and began to attack Yusupov. In each retelling of this story Yusupov made Rasputin more superhuman and demonic, probably as Douglas Smith argues in Rasputin to assuage his guilt at killing an unarmed man. 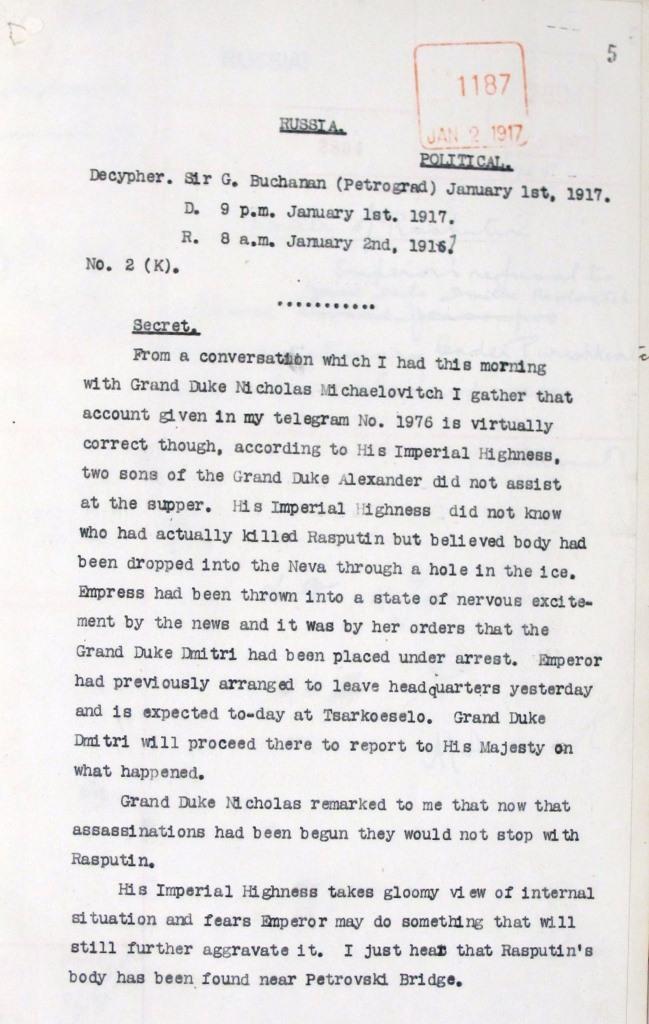 Yusupov ran out of the cellar and Rasputin escaped out of a side door into the courtyard, crawling and screaming like a ‘wounded animal’. Purishkevich, according to his version of events, shot four times at Rasputin; two shots missed, the third hit him in the back and the fourth in the head. Others, such as the Tsar’s eldest daughter, Olga, believed that Grand Duke Dmitry, a professional soldier, fired the fatal shot.

The murderers tied up Rasputin’s body with ropes, wrapped it in some blue fabric, put it in the car and then drove to Petrovski bridge. His body was dropped into a hole in the ice of the river Neva. According to Rasputin’s daughter he was still alive when thrown into the water.

Rumours immediately spread that Rasputin had been murdered. There is evidence of this in the document FO 371/2741.

The Minister of the Interior Protopopov started an investigation into the disappearance and then murder of Rasputin. It was run by General Pyotr Popov. On the afternoon of 30 December a brown boot was retrieved from the frozen water; blood was also noticed on the railings of the bridge. The river police were called in and found Rasputin’s body in the icy river on 1 January (19 December in the Russian calendar). The document FO/371/2994 reiterates this chain of events – the belief that Rasputin’s body was dropped into the river Neva and the news that his body had just been found near Petrovski bridge.

The autopsy on the body took place around 22:00 of that day. It was conducted by Dr Dmitry Kosorotov. He found that Rasputin was shot three times. One shot was on the left side of his chest, one in his back and the fatal shot was in his forehead. Dr Kosorotov also found there were no traces of poison in Rasputin’s body. The doctor Lazovert later stated he had a pang of conscience and had put a harmless substance on the cakes, not powdered cyanide. The autopsy also proved that Rasputin had no water in his lungs and was dead before he was thrown into the water.

Many Russians, Swedes and Germans at the time believed that the British Secret Service had been involved in the murder. The motive was that Rasputin was known to be against the war and the British feared he would try to broker a peace deal with Germany.

According to Andrew Cook’s To kill Rasputin the British agent involved in the murder, possibly even firing the fatal shot, was Oswald Rayner, a close friend of Yusupov from his time at Oxford University. The Tsar himself said to the British Ambassador George Buchanan that he’d heard British agents were involved in the murder. The Ambassador strongly denied it. A document in our collection does show that George Buchanan had heard about a plot to kill Rasputin roughly a week before it happened (FO 371/2994).This shows Buchanan had prior knowledge of a plot but there is no evidence to suggest the British were involved. Unusually, his murderers were proud to proclaim what they had done and many Russians regarded them as patriotic heroes.

So what happened to Rasputin’s murderers? They literally got away with murder. Prince Yusupov was banished to a distant family estate and Grand Duke Dmitry was exiled to Persia. The others got no punishment and most of them slipped back into obscurity. 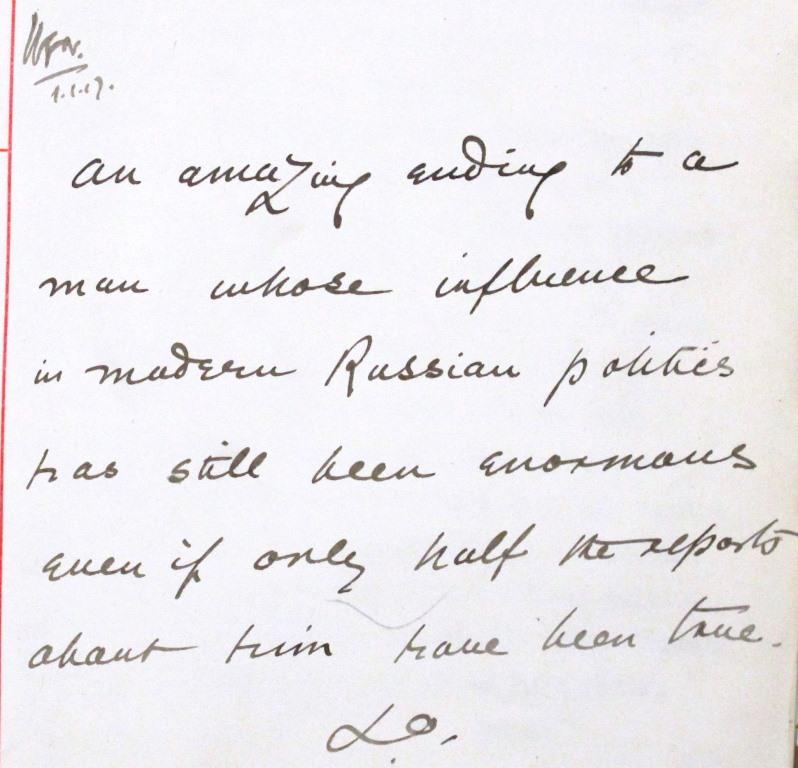 Yusupov moved to America and, short of money, began cashing in on his notoriety as Rasputin’s murderer by writing several sets of memoirs about the event. He died in 1967.