One hundred years ago today, the Battle of Neuve Chapelle was in its closing stages. A small village in northern France between Béthune and Lille, it played host to the first major British offensive of the war. Those three days of fighting marked a significant point in the British war experience, something confirmed just eight weeks later when fighting over the same ground during the one day engagement at Aubers Ridge. Though neither operation was successful, within a month of the Battle of Aubers Ridge the way in which the British armed forces were supplied in the field changed dramatically.

As suggested in last week’s blog post, shell supply had been a significant problem during the first year of war. With the pace and timing of operations dictated by the availability of material and manpower, the standing arrangements behind supplying the armed forces were quickly overwhelmed. Nonetheless, after a ‘long and depressing winter spent in the trenches’, the Commander-in-Chief of the British Expeditionary Force, Sir John French, planned to raise the morale of his army with offensive operations in the new year. During the lull after the first Battle of Ypres, he enforced the strictest economy affordable on his guns to build a reserve of shells; it would be this reserve that allowed him to launch his offensive at Neuve Chapelle in the spring of 1915 (WO 79/84).

Supply of artillery ammunition to the British Expeditionary Force in France, 23 June 1915. Catalogue reference: WO 79/84

Key objectives between 10 and 13 March included advancing through the village to capture the high ground of the Aubers Ridge before breaking through the German lines and advancing on Lille, some 15 miles beyond. The stockpiled shells allowed for the most concentrated barrage yet witnessed in the conflict – the Royal Artillery is said to have expended more shells on that day than during the entire South African War. Nonetheless, even this weight of firepower failed to subdue the German defences to the point at which the Anglo-Indian forces could break though and break out. Though the village itself was captured among other limited gains, the critical high ground of the Aubers Ridge remained beyond their grasp. Writing in 1919, French claimed the attack was abandoned ‘because we were brought to a standstill through want of ammunition’. 1

Writing to the War Office only days after the event (in the letter below), French noted: ‘I desire to state with all the weight of my authority as Commander-in-Chief of the British Army in France that the object of His Majesty’s government cannot be attained unless the supply of artillery ammunition can be increased sufficiently to enable the Army to engage in sustained offensive operations, and I further desire to impress on them the very serious nature of the effort that is necessary to make to achieve this end’ (WO 158/21). 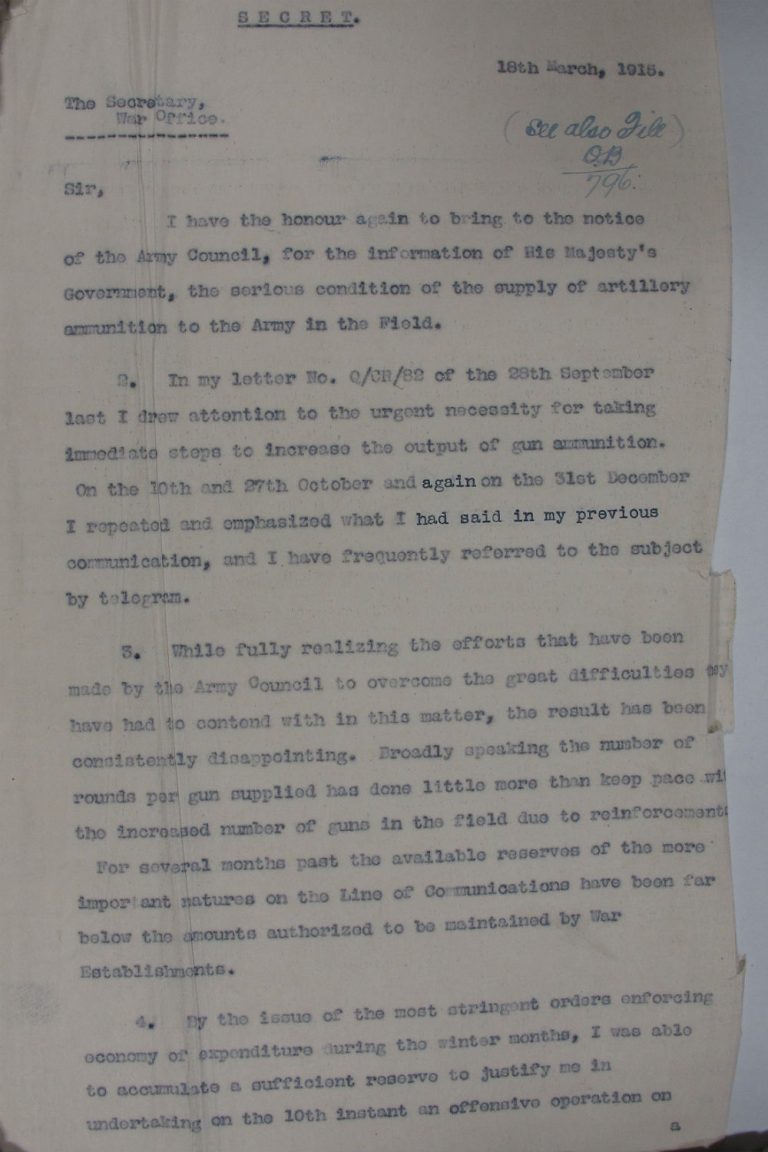 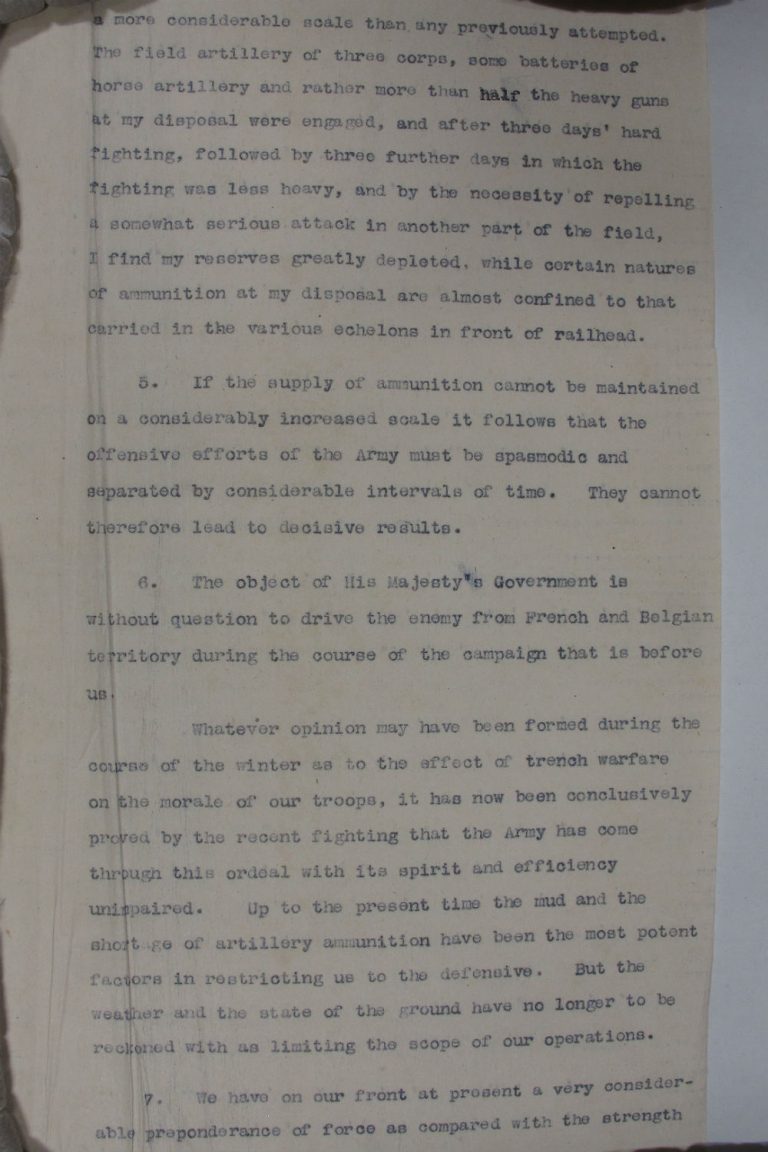 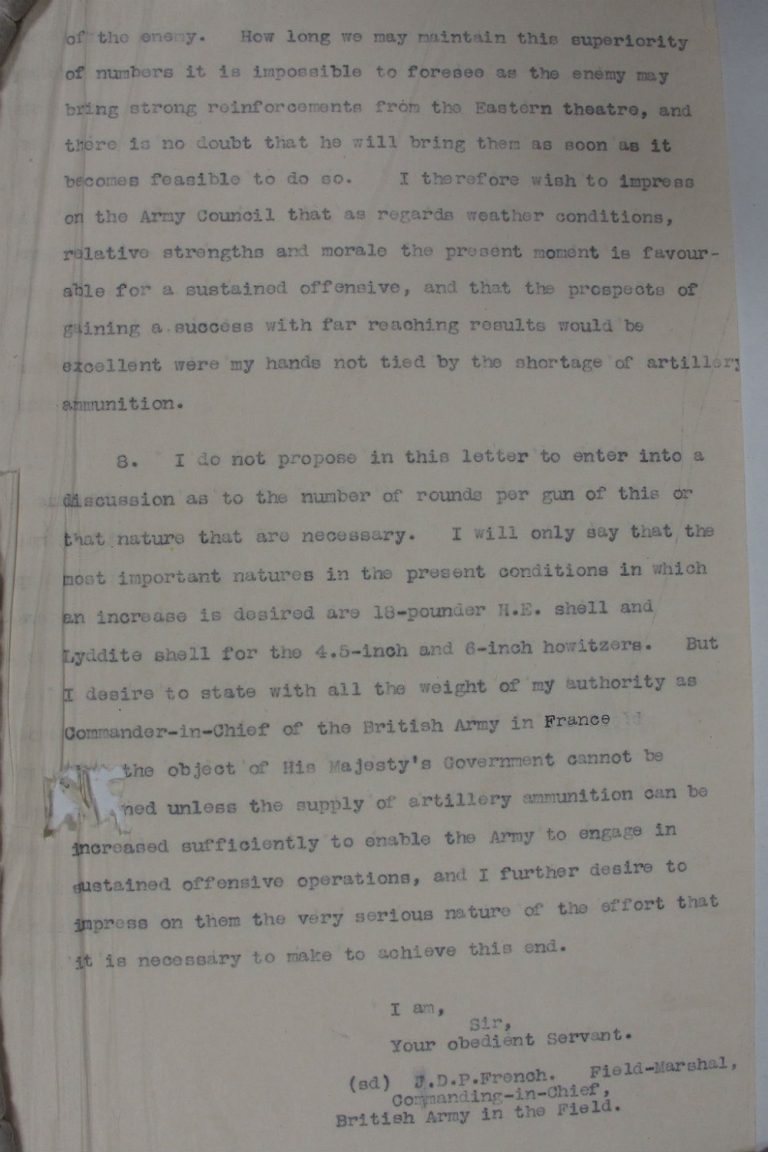 However, French’s warning was not restricted to private channels. Speaking to the Havas news agency on 22 March, he noted: ‘it is a rough war, this, but the problem it sets is a comparatively simple one – munitions, more munitions, always more munitions’ (The Times, 24 March 1915). A few days later on 27 March he further explained himself in a statement in The Times but in a more serious tone: ‘the protraction of the war depends entirely upon the supply of men and munitions. Should these be unsatisfactory the war will be accordingly prolonged’ (The Times, 24 March 1915). In the wake of Neuve Chapelle, not only did the commander-in-chief of the British Expeditionary Force fire public and private shots across the bows of the War Office and civil establishment, he had also begun to stir public opinion.

At home, the politicians finally began to pay attention. Despite a power struggle between Lord Kitchener and David Lloyd George, on 8 April a weighty Cabinet committee under the latter’s command, the Treasury Munitions of War Committee, was set up to counterbalance the War Office’s new Armaments Output Committee (PRO 30/57/82). By late April Kitchener was close to accepting that the manufacture of munitions, with all its associated manpower issues, was too big a problem to be handled by the Ordnance Department of the War Office alone. Sadly, these developments had little immediate impact on the situation in the field.

Just eight weeks after the failure of Neuve Chapelle, a second attempt was made for the high ground of Aubers Ridge as the first phase of the French army’s Festubert offensive. Lasting just one day and resulting in more than 11,500 casualties, the Battle of Aubers Ridge was nothing short of an unmitigated disaster.

German barbed wire and defences had been largely untouched by the insufficient 40 minute bombardment, something compounded by the lack of high explosive shells. Angered by the fact that his repeated warnings had not brought change, French ‘immediately gave instructions that evidence should be furnished to Colonel Repington, military correspondent of The Times, who happened to be then at Headquarters, that the vital need of high-explosive shells had been a fatal bar to our Army’s success on that day’. 2. Though French’s actions were flagrantly political and as such, in the eyes of many, were reprehensible and far beyond the remit of a soldier, he felt forced to take ‘the most drastic measures to destroy the apathy of a Government which had brought the Empire to the brink of disaster’. 3 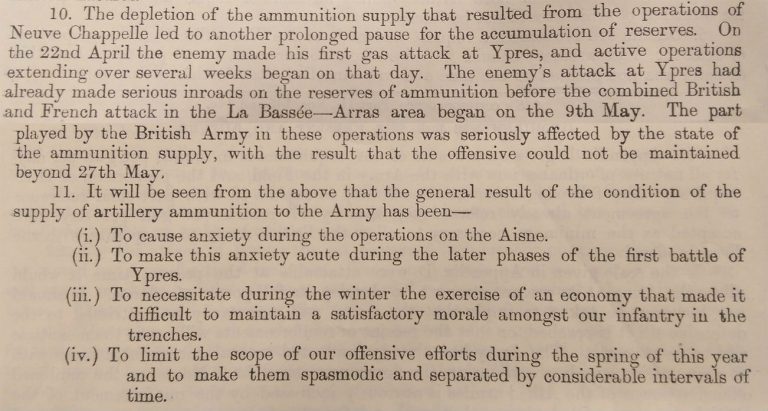 Supply of artillery ammunition to the British Expeditionary Force in France, 23 June 1915. Catalogue reference: WO 79/84 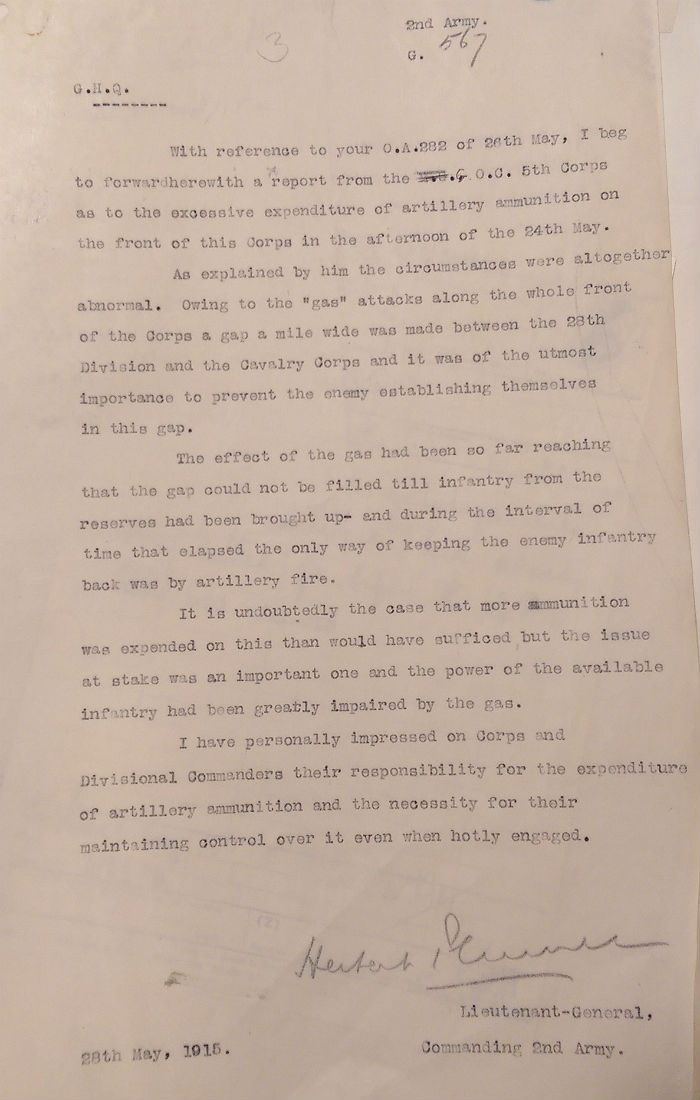 Inflammatory headlines in The Times and The Daily Mail openly attacked the publically revered Lord Kitchener, causing nearly as much outrage as the shell scandal itself. Nevertheless, along with the evident failure of the Dardanelles operations, this attention contributed to the collapse of Asquith’s Liberal government in late May 1915. Despite significant progress made under the direction of the two new armaments committees, Aubers Ridge and French’s intervention made the War Office’s attempt to maintain control of war production untenable. As part of the new coalition that emerged, it was announced on 26 May that the committees would be superseded by the formation of the Ministry of Munitions. This came into being under Lloyd George’s control on 9 June and was given new, sweeping powers under the Munitions of War Act the following month.

Although the episode provided Sir John French with cover for his tactical shortcomings as well as the means for Lloyd George to pursue his own political ends, the shell shortage had undoubtedly been real. The net result was a new ministry with new powers over civilian as well as government factories, labour, raw materials, foreign purchases and the import market. What exactly this new ministry achieved in comparison to its forebears will be explored next week in the last of this series of blog posts.

To listen to wider reflections on the Battle of Neuve Chapelle, and the role of India in the First World War, listen to our podcast.