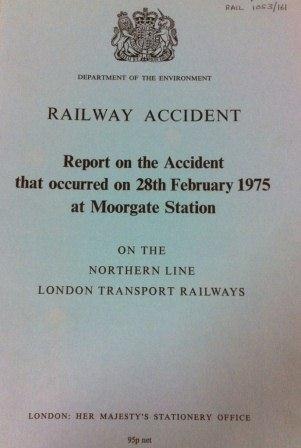 28 February 2015 is the 40th anniversary of the Moorgate Tube crash in 1975. Files from various government departments held here at The National Archives provide more information on this crash, the worst ever on the London Underground, which tragically resulted in 43 deaths and 74 people hospitalised with injuries.

The accident occurred when Northern Line train number 272, carrying 300 passengers, overran the Underground station at Moorgate, ploughing into the sand-drag (intended to slow trains which had failed to stop), hitting the buffer-stop and crashing into the concrete wall at the end of the tunnel.

The recommended speed on approaching the station was 15 miles per hour, but on this occasion the train was travelling at over 35 mph and appeared to be accelerating. When rescuers first reached the platform it appeared to them that a four coach train had stopped at the station. Then it dawned on them that the first two and half coaches had crumpled to half their length in the remainder of the tunnel. The first coach had creased itself up into the roof of the tunnel with the second coach driving under the back of it. The third coach had risen up over the second, impacting on the first coach.

A Lord Chancellor’s Department file, LCO 20/1102, dealing with compensation for personal injury cases includes information on the size of the recovery. The six day rescue operation involved 1324 firemen, 240 policemen, 80 ambulance men, 16 doctors and numerous voluntary workers and helpers. The last body to be brought out of the tunnel was that of the driver, Leslie Newson, a 56 year old husband and father of two children.

Mystery has surrounded the cause of the accident, and to this day no-one has been able to explain why it happened. The Official Department of the Environment Report on the accident (RAIL 1053/161/5) reveals that the train was old, dating from 1938, but it and the braking system were all in good working order.

The report includes statements from work colleagues who say that the driver, Leslie Newson, was known to be naturally cautious in his driving habits. A quiet man with few friends, he always wore his uniform in full and rarely drank alcohol. His usual practise when approaching stations was to slow down early and let the train coast into position at the platform.

A post mortem showed that he had not had a heart attack, nor had he suffered an epileptic fit. The previous day he had asked his wife to withdraw some money with which he planned to buy his daughter a car – not the actions of someone intent on suicide, although the press made the point that he had not even raised his hands to protect his face when the crash occurred. The guard on the train stated that Newson had ominously overshot at another station the previous week. 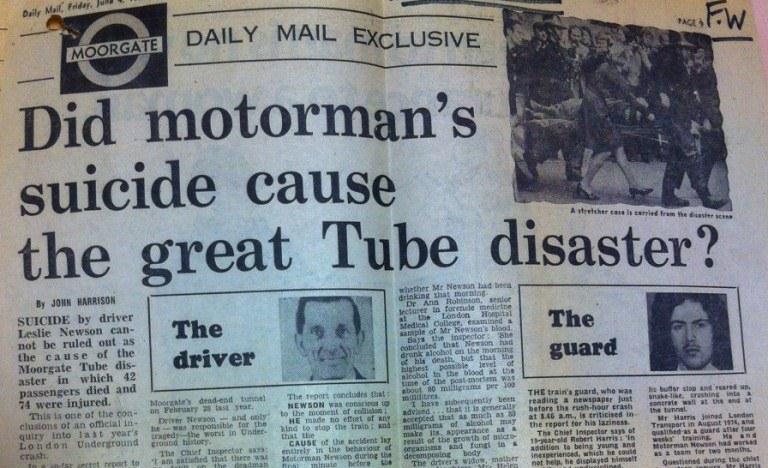 Following the disaster London Transport introduced a permanent 10mph speed limit on all trains entering ‘dead end’ passenger locations, as referenced in the British Railways Board Operations file AN 183/15. In 1978 a system called ‘Moorgate Protection’ was introduced, which automatically applied the brakes if the driver had failed to do so.

News of the crash spread around the world, and Prime Minister’s Office file PREM 16/332 shows that telegrams of condolence were received by the Prime Minister, Harold Wilson, from such diverse countries as Lesotho, New Zealand, The Socialist Republic of Romania and the Republic of Zambia. He also received a telegram from the UK Islamic Mission, and a Memorial Service was held at St. Paul’s Cathedral on 19 March 1975, at which nearly 2000 people attended. 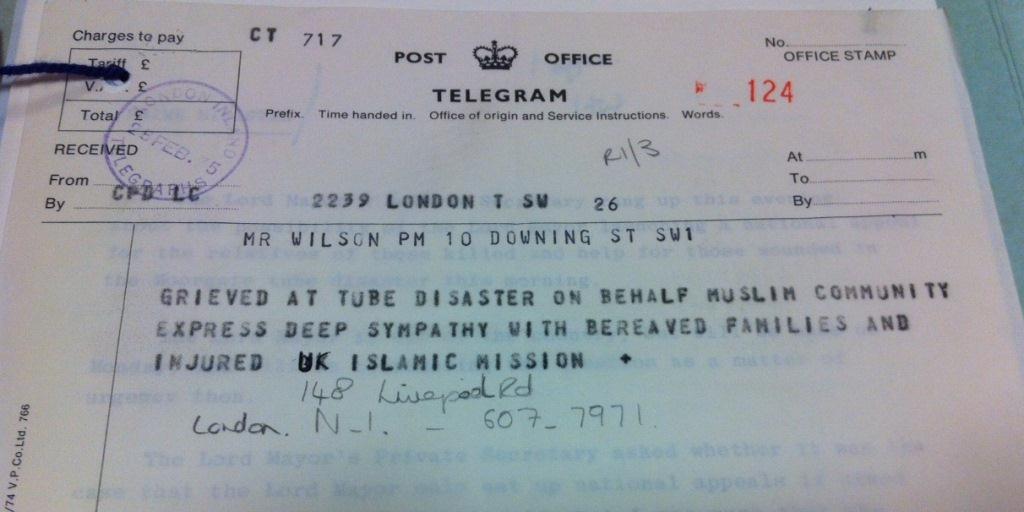 Despite all the investigation, the eye-witness evidence and the various theories, no conclusive reason has ever been given for the cause of the crash, except ‘driver error’. Was Newson suicidal, was he taken ill or was he simply distracted by something? Nobody will ever know what the driver of train 272 was thinking as he drove into Moorgate Station at 8.46 that terrible morning.