The ‘Monuments Men’ in Normandy after D-Day

You may have heard of the Monuments, Fine Arts and Archives (MFAA) officers, better known as the ‘Monuments Men’ – if you haven’t seen Clooney’s movie, maybe you have read this blog on art looted by the Nazis in Bruges. Both focused on the essential part these special officers of the Allied armies played in the recovery of looted works of art during and after the Second World War.

But it seemed to me that their action to safeguard historic monuments located on the European battlefields was less known. As a placement student from the Institut National du Patrimoine, the French school which provides training for curators, I thought that my seven weeks at The National Archives would be a great opportunity to investigate some of the records held here on the subject. I was especially curious to know more about what the Monuments Men had done in Normandy after D-Day.

Someone with only art and architecture in mind might feel the Allies could not have chosen a worse region for their landing operations. Normandy is rich in monuments, including some of the world’s architectural treasures, such as Mont Saint-Michel or the cathedral of Rouen. It also has a great deal of churches, castles or ancient houses ‘which while [they can] not rank as artistic or historic monuments of the first order, yet [possess] such interest or charm as to make their loss deplorable’ (T 209/13). In 1944, their number was actually so high that it ‘horrified’ the Allied Command, as Lt. Geoffrey Webb, head of the MFAA, reported at the time (T 209/2).

The protection of historic monuments in wartime was not merely a concern for art lovers. Many great names in the art world, like James Mann, the director of the Wallace Collection, had warned the British government they needed to safeguard European artistic heritage in order not to be ‘arraigned as fellow criminals with Hitler and Goering’ by posterity (T 209/1).

More urgently, sparing the French monuments as much as possible was a way for the military command to refute Nazi and Vichy propaganda that kept bringing up the ‘ruins’ the Allies left behind them. It was crucial to gain the support of the French population after D-Day; handbooks distributed to Allied soldiers pointed out that respectful behaviour towards local monuments would be particularly valuable to the French, by nature ‘suspicious of tourists, especially the English’ (WO 220/610). 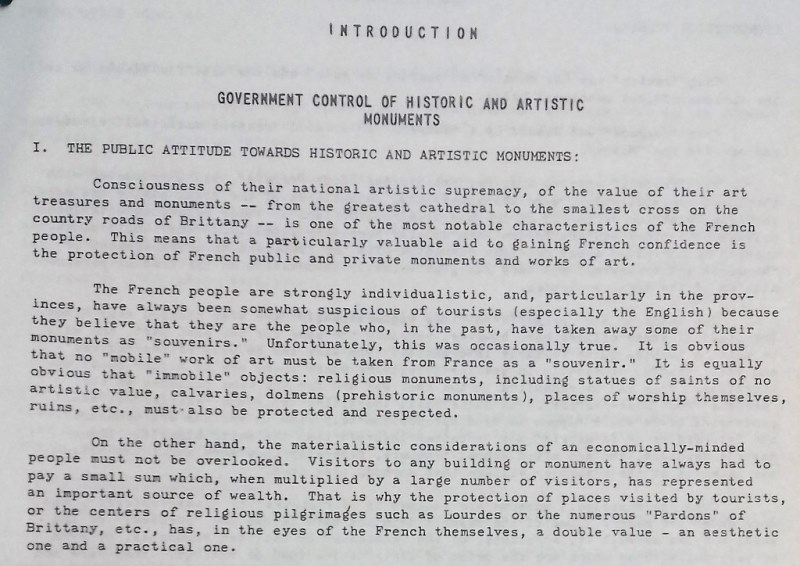 The MFAA organisation already existed before D-Day. Created at the end of 1943, it had fought to protect world’s treasures on the Italian front but lack of training and equipment had prevented its officers from being totally efficient. The operations in Normandy were more carefully planned. First, the structure of the MFAA for North-Western Europe was clarified throughout the spring: defined as a ‘joint-Allied enterprise’, it was established as a special section of the Civil Affairs Division of the Supreme Headquarters Allied Expeditionary Force (SHAEF), and therefore placed under the control of the Commander in Chief, Dwight Eisenhower.

At this time, nine MFAA officers – all ‘Allied military personnel possessing a knowledge of art’ – were working in the section under the supervision of Lieutenant Geoffrey Webb, a renowned art professor. In March 1944, they were sent to the English countryside in order to write the ‘French handbook’, which contained a precious list of the monuments and cultural institutions that were to be spared as much as possible by military operations. Back in London in May, they began to prepare for their imminent work in the field (WO 220/589).

One of the first reports written by Capt. LaFarge, dated 18 June 1944, on the Château de Fontaine-Henry, near Bayeux (catalogue reference: WO 220/632)

The first MFAA officer sent to Normandy was Captain Bancel LaFarge, an American architect and Francophile, who enlisted in the US Army in 1942. Arriving on 7 June, he wrote his first report only a week later.

He was joined in July by Lt. Stout, Squadron Leader Dixon-Spain and Captain Posey. Each one of them was following the progression of the army he was attached to. As the Allies advanced further in the East of France, they handed over their responsibilities in Normandy to four other MFAA officers arrived in August.

These eight officers were supposed to deal with the 390 Normandy monuments listed in the ‘French handbook’. The task seemed almost impossible. They lacked everything from paper to support from their military superiors, who tended to look down on them because they were low-rank officers.

During the first weeks, they had to rely on the ‘romantic but highly inefficient method of hitch-hiking’ to visit monuments (WO 220/632). They spent a lot of time moving from one place to another. I checked on Google Maps: Major Methuen travelled almost 650 miles in just a week! 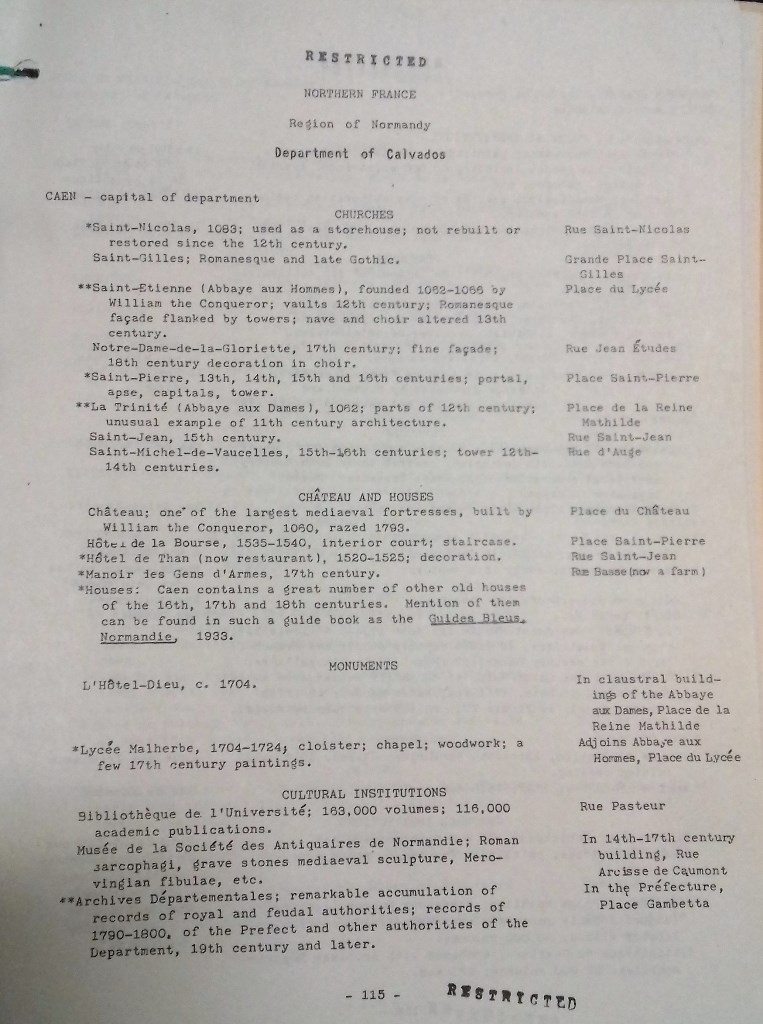 Civil Affairs handbook for France, ‘Cultural institutions’. List of the monuments to be protected in Caen. Two or one-star monuments are those of ‘intermediate importance’, the others are ‘of lesser importance’ (catalogue reference: WO 220/610)

The first mission of the MFAA officers was to ‘survey monuments and report as to their general condition to higher headquarters’ (WO 220/589). The National Archives holds most of these reports, which are invaluable if you want to picture the condition of monuments after the battle of Normandy. Many of them had suffered – like the cathedral of Rouen, hit by three bombs in April 1944, or the Palais de Justice (the courthouse) where bullet holes can still be seen on the walls today – but judging from their reports, the MFAA were expecting far worse damages.

Whenever possible, the officers would help the French authorities to proceed to emergency repairs, as did Major Methuen with the Saint-Jean-de-Caen church, whose tower ‘was in danger of falling on the street and killing passers-by’ (WO 220/612). But most of the time, these reparations were made impossible due to shortage of supplies. When he urgently needed tarred paper to cover monuments which had lost their roof before winter, Methuen made several claims to both Allied and French authorities, to no avail. 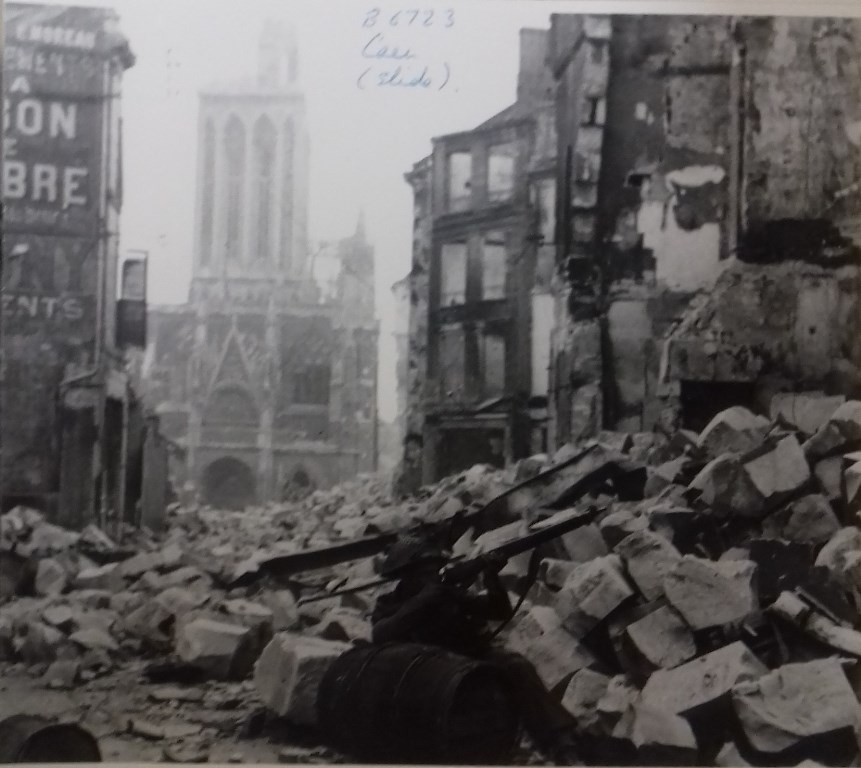 The MFAA officers also had to ‘prevent further deterioration’ of the monuments. That mostly implied planting ‘off-limits’ signs in order to prevent billeting or removal of material. These warnings were aimed not only at the soldiers, who often picked up stones or pieces of stained-glass from the debris of bombed buildings to keep them as souvenirs, but also at the military engineers, who would use these same debris for road repairs. 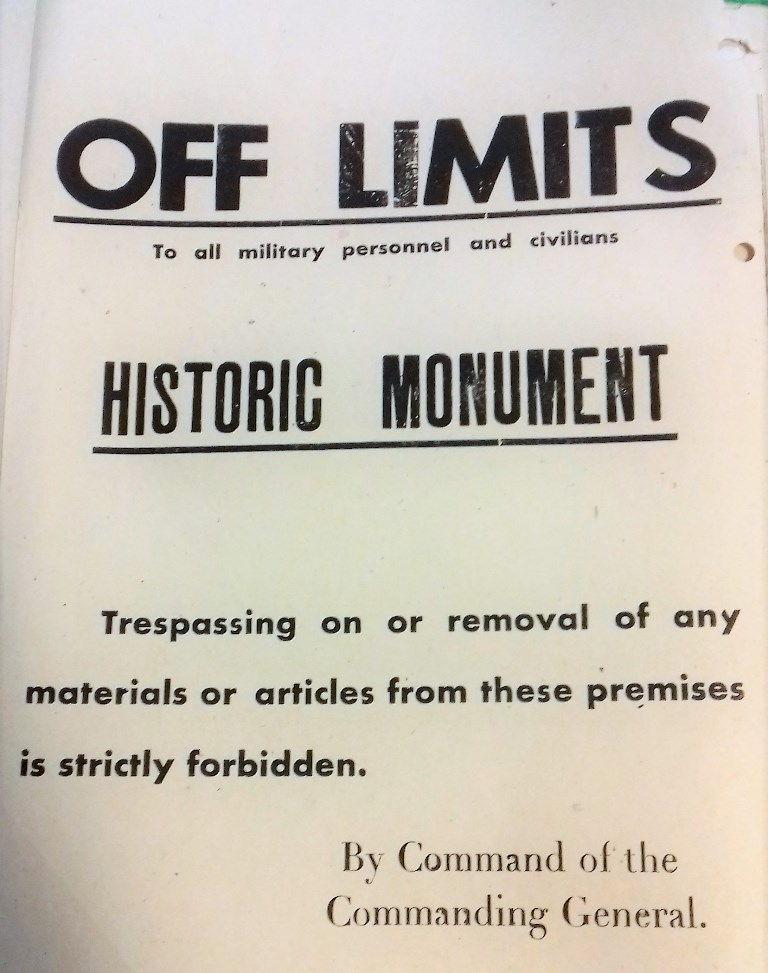 However, it proved difficult to restrain the curiosity of Allied troops: on his visit to Mont Saint-Michel on 18 August 1944, 2nd Lt. James Rorimer, a curator and medieval art specialist, was astonished to discover the small town overcrowded with 1,800 soldiers who used the place ‘for overnight carousing’  in spite of three ‘off-bounds’ signs (WO 220/632). 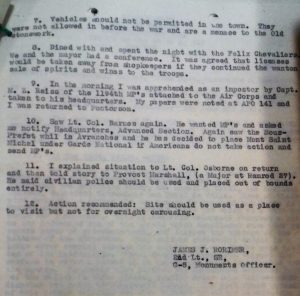 It’s quite clear this did not happen just this once, and the Monuments Men might have felt helpless very often. Reading their much standardised reports, though, I got the impression that they did not consider their job as the most unpleasant one. This opinion seemed to have been shared by that Deputy Commander of the Royal Engineers who once told Major Methuen ‘he whished he had [his] job’ (WO 220/612).