Missing from the census?

All family historians use the census, and most of us find most of what we want, most of the time. This is of course due to the fact that every census for England and Wales has been indexed; sometimes you even have a number of versions to choose from, so if you don’t find a person on one website, you might find them on another. Where the handwriting is hard to read, it all comes down to interpretation.

But sometimes, despite your best efforts, a person or a family stubbornly refuses to be found. You might even have tried searching for them ‘the old-fashioned way’. That is, searching by address, assuming you have some indication of where they were living at the time of the census, and that they either lived in a village or there is a street index for their town. That was the usual way of finding someone in the census until just over a decade ago.

If you have exhausted all the possibilities of using name indexes, including possible mis-spellings and mis-transcriptions, you are left with a dwindling number of possibilities, which fall into three categories:

You might not find an individual or a family because the name is quite different from the one you were expecting; this can happen where a widow re-marries and then she and her children from the first marriage are all listed under her new husband’s surname. There was no need for such a change of name to involve any paperwork whatsoever, and it is not at all unusual for children to revert to their own father’s surname in later life, or even to switch back and forth between the two. Others may have the same surname throughout, but appear with different given names, because they use a middle name or a nickname, in preference to the first name that their parents chose. Some guests at the wedding of a couple I know thought they were at the wrong church, because they had been invited to Nick and Janice’s wedding, but the order of service said Charles and Bridget! A few people are listed without a name at all, but only initials. This is the way that inmates of prisons and asylums are sometimes enumerated, although plenty of them do appear with their full names, too.

You need to take particular care with Scottish families who use the traditional naming pattern, inevitably resulting in several family members with exactly the same name. The practical response to this was the creative use of diminutives and variants, some of which seem to defy all logic. Did you know, for example, that Pearl is a variant of Margaret? I didn’t. My favourite is an ancestor called Isabel (itself a variant of Elizabeth) who appears in one census as ‘Ezzybean’. Alan Bardsley’s ‘First Name Variants’ (FFHS 2003) is a really useful guide, although even this book doesn’t warn you that a girl called Happy might have been baptised Kerenhappuch.

Some rugged individualists, of course, absent themselves from the census on principle. The suffragette boycott of the 1911 census is fairly well-known, but there have been cases in every census where people have refused to fill in their census paper. The artist J M W Turner is reputed to have rowed himself out to the middle of the Thames on census night in 1841 to put himself out of the jurisdiction of any enumerator. But genuine instances of refusal to complete a census form are rare, and prosecutions even rarer. In 1861 the Registrar General, George Graham, said:

‘I treat these cases of obstinacy as more or less connected with insanity; and being isolated cases not very frequently met with, I do not think it necessary to prosecute the recusants’

So if your ancestor was not enumerated, it is likely to have been by accident rather than design. Or they might have been out of the country at the time of the census. Anyone who was in the army, the navy or the merchant service is likely to have been beyond the reach of the census authorities some of the time – in the case of the army they might be stationed in Scotland or Ireland, where they would be enumerated in that census instead. Since most 19th Irish census returns do not survive, this is only really useful for 1901 and 1911. 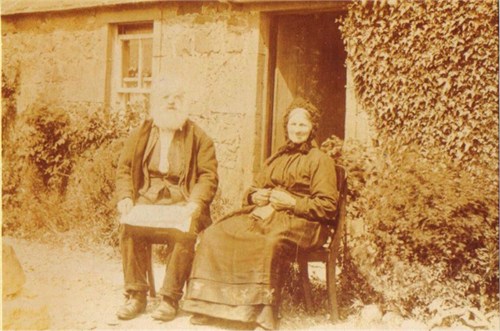 What is more surprising is the number of people who are out of the country but whose descendants have no inkling that they ever travelled at all. I have a picture of my own great-great grandparents sitting outside their cottage in Montrose, and I always thought that this sweet old couple had spent all their (very long) lives there, while two of their sons ventured all the way to the brave new world of Glasgow. I have their baptisms, their marriage and the births of their 9 children, all within a small geographical area, and I found them in every census from 1841 to 1911, except 1901. This did not bother me because I thought I knew everything I needed to know about them. I was wrong. When I was looking for something else altogether I found that at the time of the 1901 census they were in the middle of the 13 years they spent farming in Minnesota!

This leaves us with the bits of the census that are missing altogether, perhaps the most frustrating of all answers we have to give to enquirers. No census is 100% complete, although some are better than others. You can get a rough idea of which parts of a census are missing by searching in Discovery, our online catalogue, using the keywords ‘missing’ or ‘wanting’, and restricting your search to the reference for that census; HO 107 for 1841 and 1851, RG 9 for 1861, RG 10 for 1871 and so on, up to RG 14 for 1911. This will usually show where all or part of a parish or district has not survived, and you will see that 1861 has more damaged or missing parts than any other year. The missing parts even of this census still only represent a tiny proportion of the whole census, but that still amounts to an awful lot of people. You may still find that an odd page is missing in this or any census, and we don’t always know about all of them – only last week I had to disappoint an enquirer who hoped that a page missing from the online census has just been left out when it was scanned from the film. Sadly, it wasn’t on the film, and in case you ask, it is missing from the original book too.

I don’t wish to end on an entirely gloomy note, there is sometimes a silver lining. Sometimes there are unidentified fragments of documents (not just census) that are reunited with their ‘parent’. Pages for the 1861 and 1871 censuses are identical, so if a page is separated from its book it is all but impossible to know which year it belongs to. Many years ago, when the census returns were being filmed, a stray page from one of these censuses had found its way into the wrong year. It stayed there, undetected and unsuspected, until a sharp-eyed researcher recognised their own family, except that the ages were all ten years out. I don’t remember which way round it was, but you get the picture! So after many decades in the wrong place, the page could finally be put back in its rightful place. 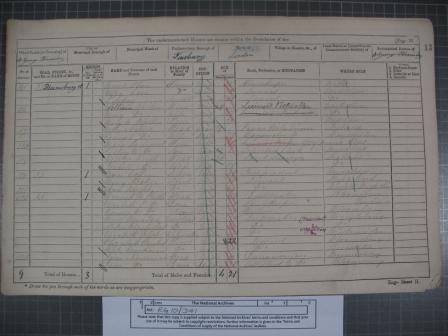 Original page from 1871 – being re-scanned

So sometimes there is hope. And on the most topical of notes, as I was typing the last paragraph, I received an email telling me that an enumeration district in the 1871 census which is so faint as to be virtually unreadable on film or online is today being re-scanned from the original book, and will in due course appear on the Ancestry site.