27 January 1916 was a watershed moment in modern British history. The Military Service Act was passed, enforcing compulsory military service for the first time on British society. 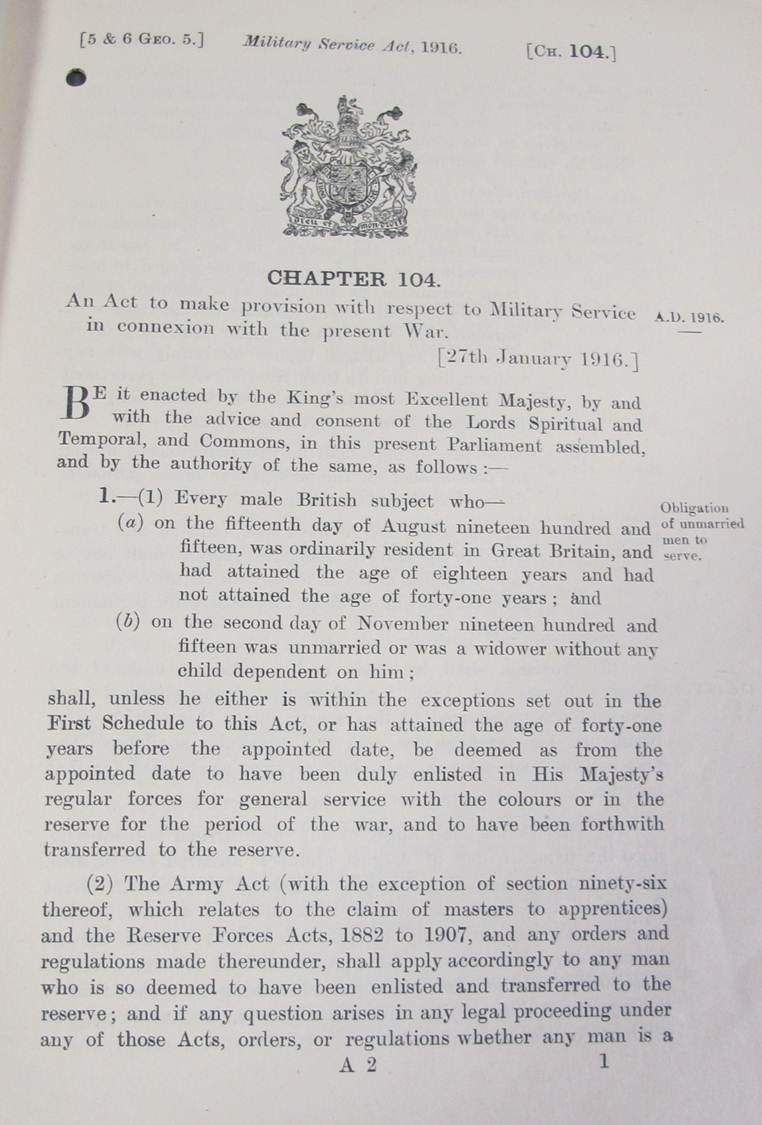 Copy of Military Service Act, 27 January 1916 detailing those under the qualifying conditions were now part of the army reserve (catalogue reference: MH 47/142/1)

Initially, the Act specified that single men aged 18 to 41 who were outside of a protected occupation (those jobs considered of national importance) were now part of the army reserve and liable for immediate call-up. Also included were widowers without children. In May 1916 the Act was amended to include married men. By 1918 it had been extended in age range to 51.

Those faced with conscription into the army were, however, given the opportunity to apply for exemption from military service at local or county based military service tribunals. Men could apply for an exemption under any of or a combination of the following grounds, covering employment, educational, domestic and health circumstances, as well as conscientious objection:

‘A: On the ground that it is expedient in the national interests that the man should, instead of being employed in military service, be engaged in other work in which he is habitually engaged

B: On the ground that it is expedient in the national interests that the man should, instead of being employed in military service, be engaged in other work which he wishes to be engaged

D: On the ground that serious hardship would ensure if the man were called up for Army service, owing to his exceptional financial or business obligations or domestic position

E: On the ground of ill-health or infirmity

F: On the ground of a conscientious objection to the undertaking of combatant service

G: On the ground that the principal and usual occupation of the man is one of those included in the list of occupations certified by Government Departments for exemption’

Luckily for us at The National Archives, we hold one of the two officially retained collections of tribunal records, covering the Middlesex County Appeal Tribunal, in our MH 47 collection.

In total we hold about 11,000 case papers, which are available to view for free via our online catalogue, Discovery. The case papers themselves reveal the day-to-day challenges faced by individuals, families, households and businesses. They also highlight how the impact of the war on society caused community divisions.

Case paper of Edmund Darvill, which highlights the extra domestic and business responsibilities he took on so that his brother and brother-in-law could serve in the military (catalogue reference: MH 47/54/58)

One area that regularly comes through from these personal statements on the appeal forms is that the family in question have already provided, and in some cases lost, sons, brothers or husbands to the army. Edmund Darvill’s case paper, above, reveals the additional business interests he had taken on so that his brother and brother-in-law could join the army. Significantly, this meant he was now the financial support for his wider family, not just his own wife and children.

Statements and evidence supplied to tribunals was not always supportive of an appellant, however. For example, in the case of Charles Busby, a butcher, a letter was sent to the tribunal by an anonymous resident describing Busby as a ‘rotten shirker’ for obtaining continuous exemptions. In contrast, the author of the letter had lost two of his sons during the fighting. 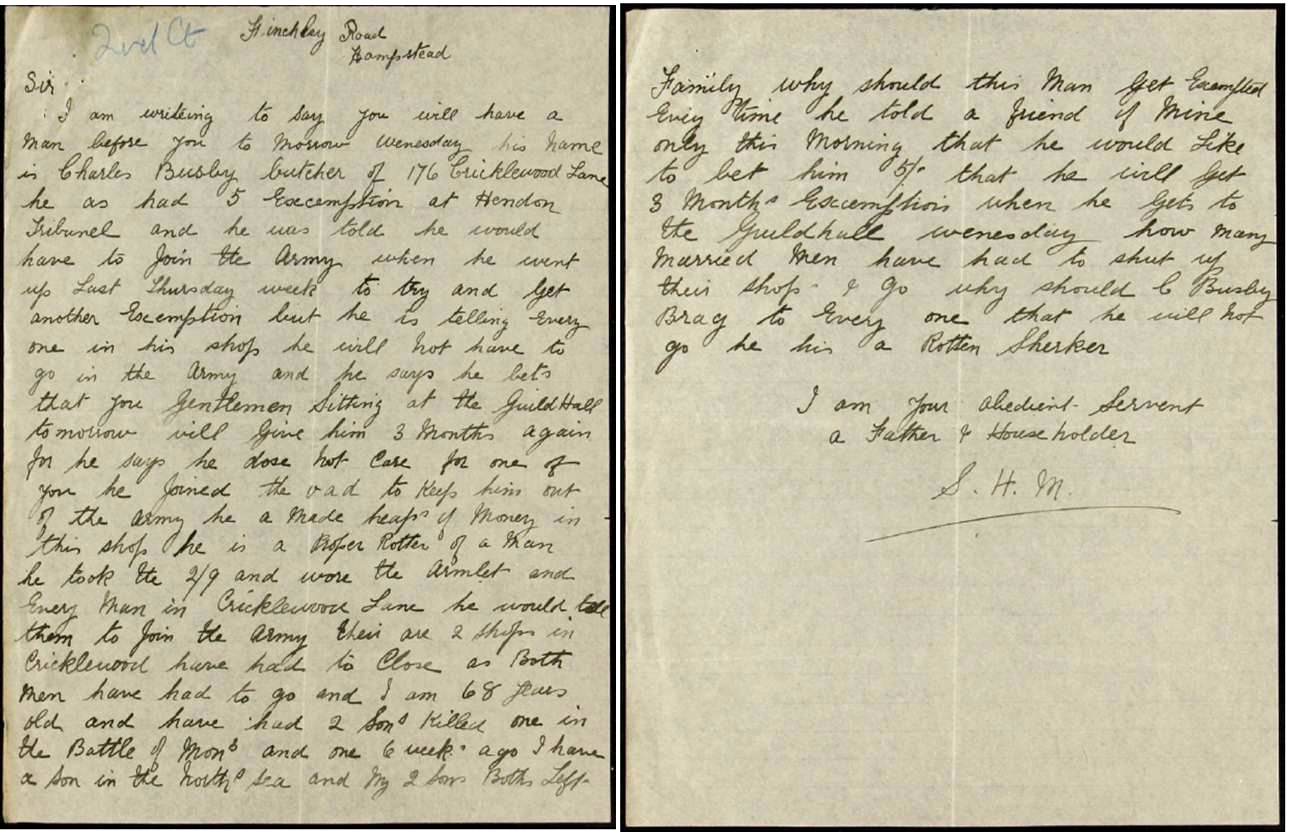 The evidence provided against appellants could also come from sources much closer to home. In the case of Percival Brown it is his wife who writes to the tribunal, pleading that he be taken by the army and that an exemption be denied. This was based upon the way her husband had treated her for a number of years and the fact that the military separation allowance would be more beneficial to her.

Another issue that divided society following the introduction of conscription was conscientious objection. In some cases, there is evidence of clear acts of discrimination against those with such objections to serving.

In the case of Charles Cunningham, the Middlesex Appeal Tribunal upheld his appeal for exemption on conscientious grounds in April 1916. The condition of this exemption was that he should remain in the employment of London County Council. Attached to the case paper, however, is a letter, dated June 1916, from the London County Council to Charles. In it, they confirm that as a conscientious objector, he is to be placed on a period of leave without pay, regardless of the Tribunal’s decision. 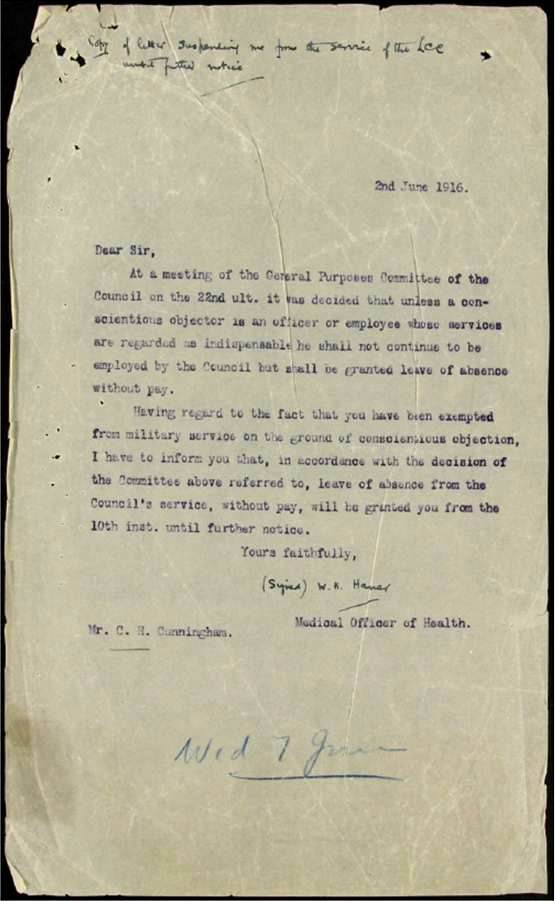 Letter sent to Charles Cunningham from employer after the Tribunal had granted an exemption. Discrimination is evident against some with conscientious objections (catalogue reference: MH 47/66/83)

Statistically speaking, conscientious cases before tribunals in the First World War appear to be very small. For example, statistics compiled by the Middlesex Appeal Tribunal show that of the 8791 individuals who came before them, only 577 were based solely on a conscientious reason (6.5%).

I wanted to explore this area a bit further and undertook some statistical sampling of my own. In the 152 cases before the Appeal Tribunal in Middlesex from residents of Heston and Isleworth, 4.5% appealed on conscientious grounds. In contrast 59% appealed under domestic hardship. In the 142 cases from residents of Wembley the figures were 4.2% and 72.5% respectfully. Finally, for the 136 residents of Southgate, it was 5.1% and 70.6%.

A further study of the 152 Heston and Isleworth resident’s cases reveals that nearly 43% actually had their exemption status improved by the Appeal Tribunal (either via an extended temporary exemption period or by a conditional exemption). In contrast, 23% received a reduced exemption on appeal.

The examples above show that the introduction of the Military Service Act added to already very emotive situations for families on the Home Front. Likewise, it is also evident that exemptions from military service could cause significant bad feeling within local communities, especially for those who had already lost loved ones during this horrific conflict. While my statistical summaries are just a very small sample, I hope they and the examples given help to showcase how tribunal material could be used to analyse the impact of war on society at home during the First World War.

With thanks to the Federation of Family History Societies and the Friends of The National Archives for their support in carrying out this project, which was originally completed in 2014. My colleagues and I will continue to post tribunal related blogs throughout the period of conscription.