Milestones to Peace: the Armistice of Compiègne

The Armistice with Germany was signed at 05:00 in a railway carriage in the Forest of Compiègne, about 70 kilometres north of Paris. Six hours later, at 11:00, the war ended. 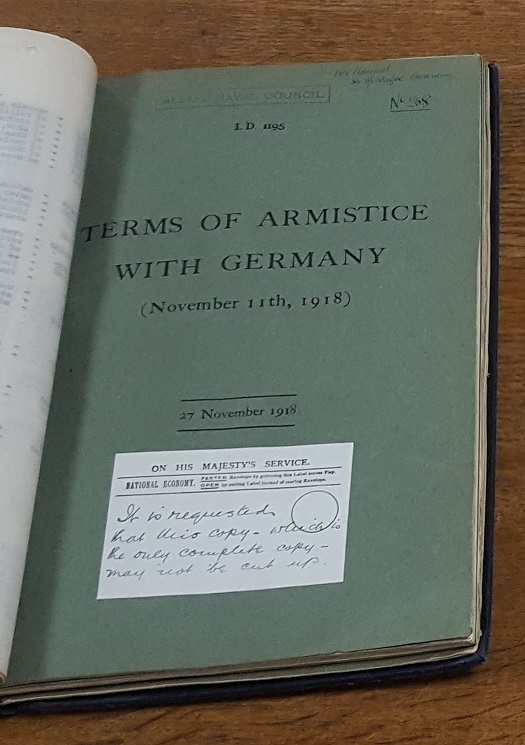 Terms of Armistice with Germany. This is the Admiralty’s official copy. Catalogue reference: ADM 116/1931

The armistice terms demanded the immediate cessation of warfare and surrender of the fleet and of heavy guns and aeroplanes. German troops had to withdraw to the east bank of the Rhine within 30 days, and a neutral zone would be established there to a depth of 30 to 40 kilometres. Allied troops were to be allowed to occupy strategic positions throughout Germany, at the expense of the German government.

Among other key conditions, all Allied prisoners of war were to be returned and all German ships were to return to port to be decommissioned. Selected U-boats and battleships were to be surrendered, with the remainder of the German fleet to be disarmed and placed under the jurisdiction of the Allied countries. 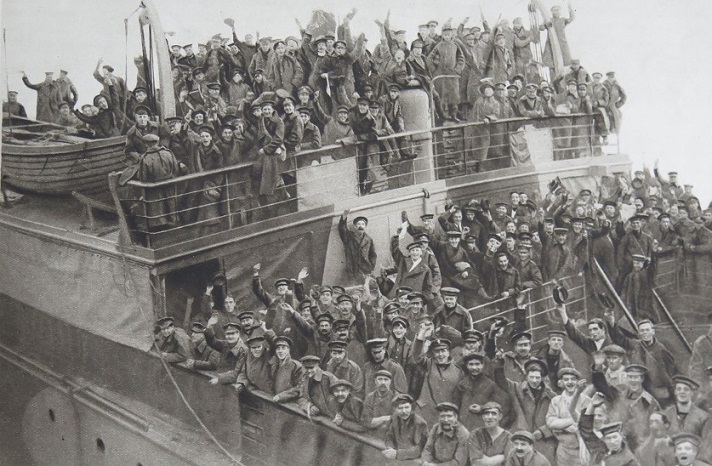 The Treaty of Brest-Litovsk, signed with the Russians in March 1918, was revoked; so was the Treaty of Bucharest, made with Romania in May 1918. This reduced Germany’s territory and political and economic control to its pre-war status. Additionally, the province of Alsace-Lorraine – taken from France as a result of the Franco-Prussian war of in 1871 – was to be evacuated, and all German forces operating in East Africa were to withdraw.

How did the armistice come about?

Several overtures of peace were made by Germany from 1917 onwards, but these were largely dismissed by the Allied leaders as fishing attempts to test the Allied resolve. It was not until January 1918, when President Woodrow Wilson addressed the American Congress with a 14-point programme for peace, that things began to be taken seriously (FO 608/148).

The German Government requests the President of the United States of America to take in hand the restoration of peace, acquaint all the belligerent states with his request, and invite them to send plenipotentiaries for the purpose of opening negotiations. The German Government accepts the programme set forth by the President of the United States in his message to Congress of the 8th of January 1918 as a basis for peace negotiations. With a view to avoiding further bloodshed, the German Government requests the immediate conclusion of an armistice on land and water, and in the air. (FO 608/148)

President Wilson’s 14 points sowed the seeds for discussion, but they had not been drawn up in direct association with the Allies. At a meeting in Versailles on 29 October 1918, between the French and British Premiers and their Foreign Secretaries and Colonel House, President Wilson’s adviser, the first of many days of debate dedicated to drawing up an Armistice began. Armistice terms proposed by Marshal Foch were considered alongside those of President Wilson (FO 608/148).

The signing of the armistice

On 7 November 1918, the German delegation came across the lines bearing a note from Woodrow Wilson which led them to believe that they would be welcome to discuss peace terms with the Allied leaders. On 8 November they were taken to the Forest of Compiègne, where there was a railway dining carriage which had been converted into a makeshift conference room. 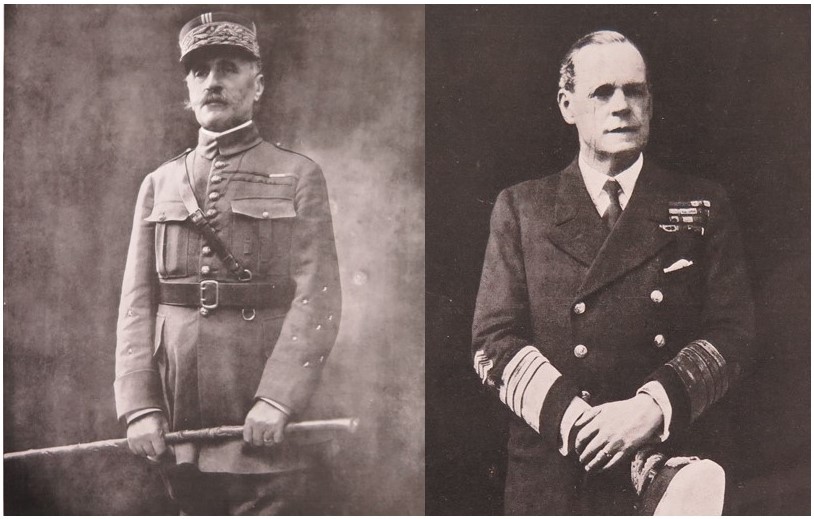 Marshal Ferdinand Foch and Admiral Sir Rosslyn Wemyss, signatories of the armistice on behalf of the Allies. Catalogue ref: ZPER 34/153 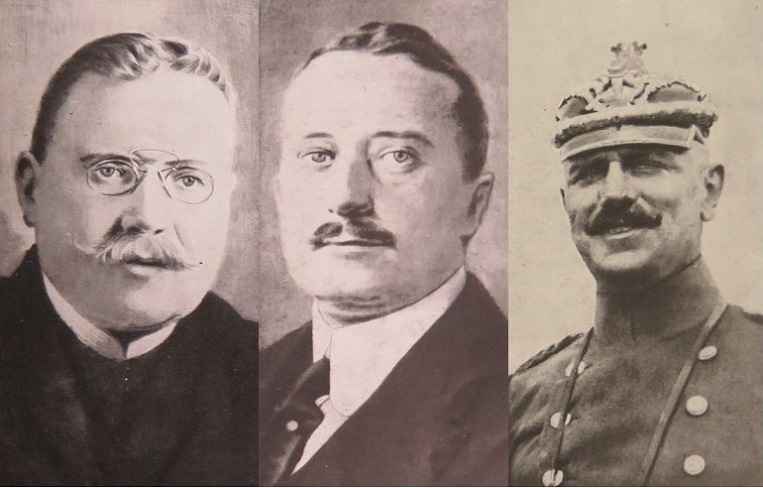 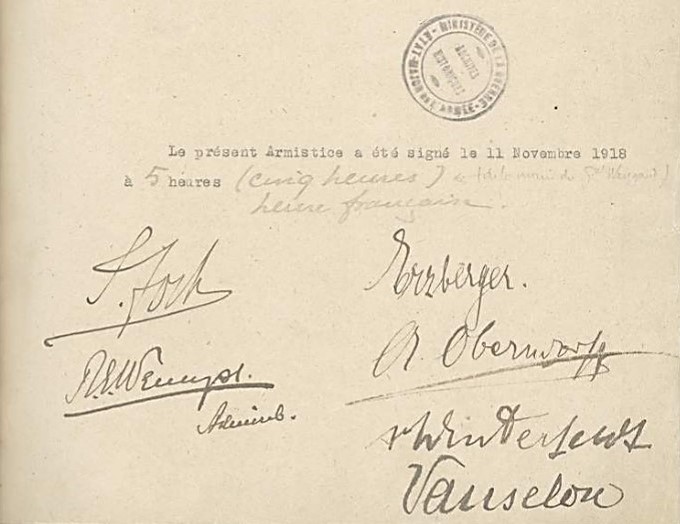 The original copy of the Armistice Convention, bearing the signatures of the Allied and German plenipotentiaries. This document is held by the Service historique de la Défense (SHD) which is the Archives of the French Ministry of Defence. Reference: FRSHD GR 15 NN 32

We can get a good impression of the negotiations that took place between the German and the Allied delegations from an unofficial account written by Walter Bagot (ADM 1/8546/319). Here is an abridged version, which makes for fascinating reading:

On Thursday 7 November, 1918 the British Mission boarded Marshal Foch’s train at Senlis station. The train arrived at some old heavy gun sidings in the middle of the Forest of Compiègne about 7pm and remained there during the whole negotiations. The German mission did not arrive until the early hours of Friday morning. On the arrival of the train containing the German delegates, Marshal Foch sent over a staff officer to say that he would receive them at 9 o’clock.

The proceedings were opened by Marshal Foch asking the German delegates what was the object of their visit, to which Erzberger replied that they had come to hear proposals for an Armistice on land, at sea, in the air and in the colonies. To this Foch replied “I have no proposals to make.” 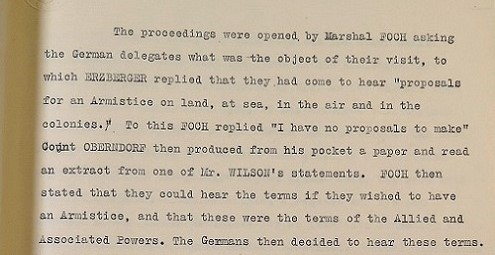 Count Oberndorf then produced from his pocket a paper and read an extract from one of President Wilson’s statements. Foch then stated that they could hear the terms if they wished to have an Armistice, and that these were the terms of the Allied and Associated Powers. The Germans then decided to hear these terms.

General Weygand began the reading of the principal articles of the terms of Armistice. The French interpreter translated each article into German as it was read. The proceedings were conducted in French. Erzberger spoke only in German, although he appeared to know enough French to be able to follow.

The Germans then retired with copies of the terms to their own train, the proceedings having lasted about an hour and a half. About lunchtime Captain Helldorf, carrying the terms of Armistice, departed in tears for the German headquarters at Spa.

At about 02:00 on Monday 11 November, the German delegates arrived for the final conference. The procedure was for General Weygand to read out the terms, article by article. The French officer interpreter then translated each article into German and then, where necessary, the final form of the article was decided upon.

When the reading of the terms had been completed, Erzberger rose and read out a declaration in German. In this he stated that the German government would do everything in its power to carry out the terms. The German plenipotentiaries, however, desired to point out that some of the terms were so harsh as to be likely to bring about a state of anarchy and famine in Germany.

The proceedings came to an end about 05:00 French time. The various documents were then signed first by Foch and Wemyss and then by the four German delegates. Orders were then issued for a cessation of hostilities on land and at sea and in the air at 11:00 French time on 11 November, the duration of the Armistice being 36 days from that hour.

About 06:00 the commandant of the train produced a bottle of port and some biscuits. A toast was drunk to the great event. At 06:20 Marshal Foch and Admiral Wemyss left for Paris by car to lay down the terms of Armistice before the French Government. The train carrying the Germans left for Paris about 10:00.

Admiral Hope and myself left for Paris about 10.30. As soon as the outskirts of Paris were reached it was evident that everybody had heard the good news. Everybody was buying flags and decorating their houses with them, and by lunchtime the people of Paris were marching about arm in arm crying La Victoire! La Victoire!

The War Cabinet met at 09:45: the Prime Minister announced that he had received a message from France stating that the Armistice had been signed and that hostilities were to cease at 11:00. They decided that a press announcement should be made at once, and that all necessary steps should be taken to celebrate the news by the firing of maroon flares, the playing of bands, the blowing of bugles, and the ringing of church bells throughout the kingdom. They also decided that the order prohibiting the striking of church and other public clocks should be at once rescinded (CAB 23/14/46). As a result, Big Ben tolled for the first time in four years.

In London, crowds spontaneously gathered around Buckingham Palace and Trafalgar Square. In Piccadilly Circus, people danced in the streets and formed huge conga lines. A thanksgiving service was held in St Paul’s cathedral on 12 November, attended by King George V and Queen Mary. On 19 November the King and Queen addressed both chambers of the Houses of Parliament, addressing them and through them the nation and the Empire, upon the triumphant conclusion of the hostilities.

On 28 November 1918, Kaiser Wilhelm II, already in exile, signed the deed of abdication at Amerongen, in the Netherlands. An Armistice Commission was set up at the Grand Hotel Britannique, in Spa, Belgium, formerly the German Imperial Army Headquarters. It was from this hotel that the Kaiser had started into exile on 9 November. The Commission was established to ensure that Germany was keeping up with its obligations established under the Armistice Convention.

On 18 January 1919 the Peace Conference was opened in Paris. It was to last for six months until the signing of the Treaty of Versailles on 28 June 1919. The treaty was only ratified on 10 January 1920. As a result, the Armistice terms, which were initially to last only 36 days, were prolonged three times, until the treaty finally came into effect.

In a memorandum written in April 1919, Francis Clarke, an official at the War Office, noted with prescience that: ‘The future observance of the treaty by Germany will depend ultimately upon the attitude not of the signatory delegates but of the German nation as a whole, which will develop according to the development of other circumstances. The power of one generation to control the fortunes of the next, whether by the promotion of high ideals or by the construction and maintenance of military and economic power, is easily exaggerated.’ (FO 608/143)

Under Article 231 of the Treaty of Versailles, Germany had to acknowledge responsibility for all the loss and damage to which the Allied and associated governments and their nationals had been subjected to as a consequence of the war imposed upon them by German aggression. The treaty imposed punitive reparations, with Germany required to pay 132 billion gold marks (US$33 billion) to cover civilian damage caused during the war.

The German people saw reparations as a national humiliation and came to see themselves as victims. The uncompromising terms of the Versailles treaty undermined the legitimacy of the newly-elected Weimar government. This opened it to attack from the extreme right and left. Communist, nationalist and fascist movements in Germany grew in strength and began to enjoy a new level of popularity. The denunciation of the Versailles Treaty was one of the platforms that gave Hitler’s Nazi Party credibility with mainstream voters in the early 1920s and early 1930s. (FO 954/10A/150)

Official celebrations did not take place in London until 19 July 1919, when a bank holiday was declared and a Victory March took place in the capital. 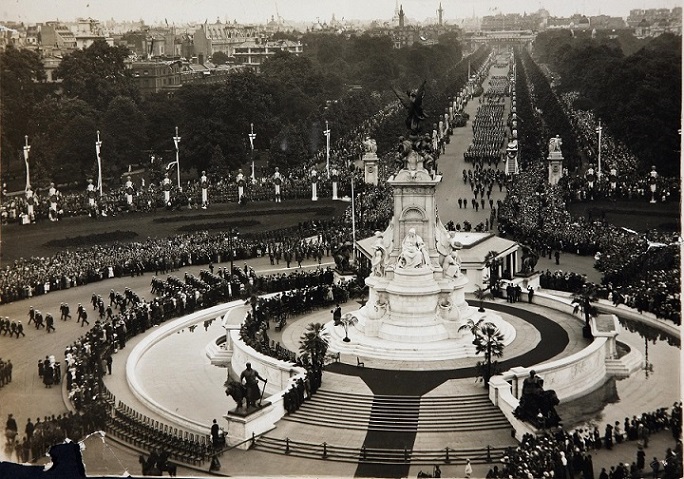 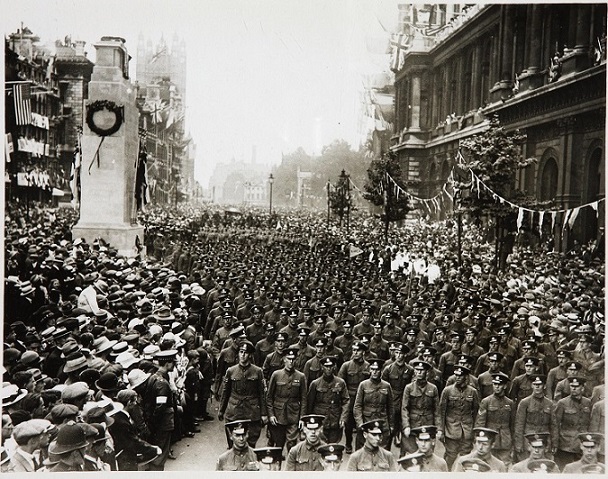 Nevertheless, the 11th hour of the 11th day of the 11th month has taken on a special significance in the post-war years. For the majority of Allied nations who took an active part in the war, the moment when hostilities ceased on the Western Front has come to symbolise the end of the war and provide to an opportunity to remember those who had died.