Home > Blog > Milestones to peace: the Armistice of Salonica

Milestones to peace: the Armistice of Salonica

Towards the end of the First World War, on 29 September 1918 there was a major step towards peace when Bulgaria announced their wish to surrender. 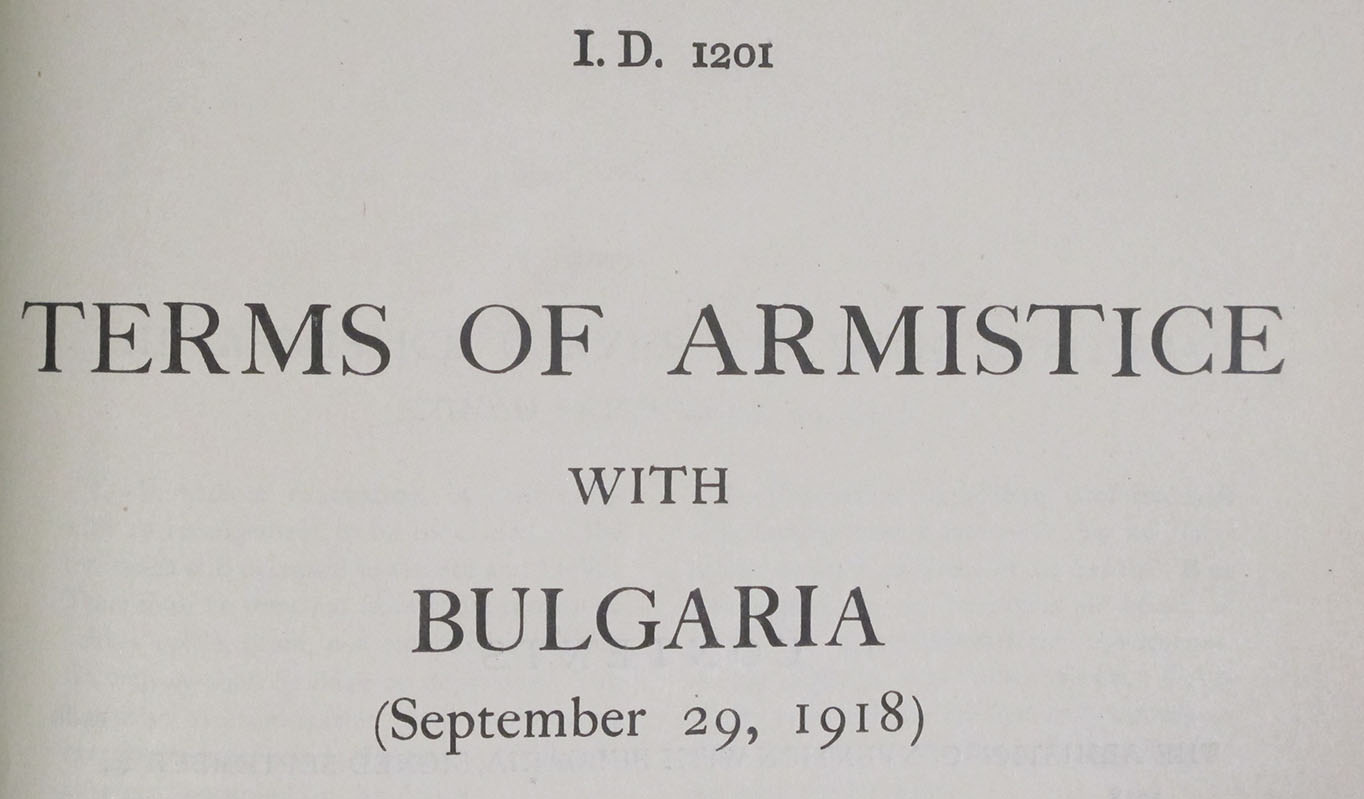 The country’s strategic position and large standing army made it a powerful ally for whichever side managed to secure its participation. Bulgaria is bordered by Romania to the north, the Black Sea to the east, Turkey to the south-east, the Aegean Sea and Greece to the south and Serbia to the west. 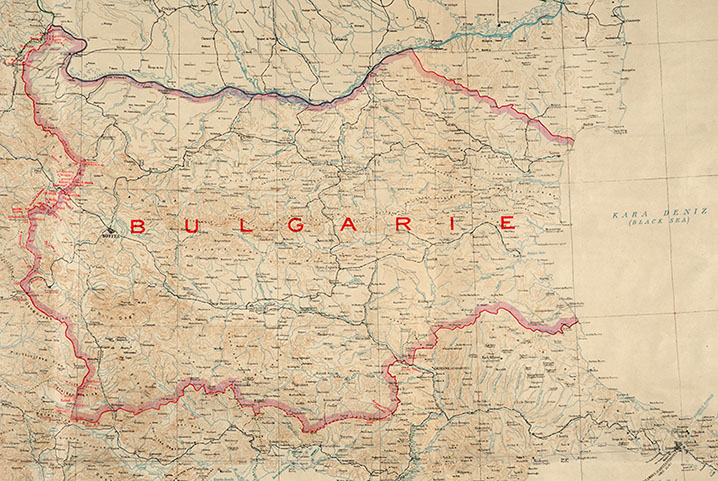 Bulgaria was keen to regain territory lost in 1913 during the Second Balkan War: under the Treaty of Bucharest, the country was forced to cede territory gained from the Ottoman Empire to Serbia, Greece and Romania (FO 881/10299X). In particular, there was popular support for Bulgaria to regain lost territory in Serbian Macedonia, which had a large population of ethnic Bulgarians.

The Bulgarian Army invaded Serbia on 14 October 1915. Skopje, the capital of Serbian Macedonia, was taken on 22 October; within six weeks the country was overrun (FO 371/2273). The remains of the Serbian Army were forced to escape through Albania to avoid capture (FO 373/1/2).

In June 1917, Greece entered the war on the Allied side and joined the multi-national army in the region, called the Allied Army of the Orient. This comprised French British, Russian, Serbian, Italian and Greek forces, along with a small number of Portuguese, Albanian and Montenegrin troops (WO 106/1374).

On 15 September 1918, this large force – commanded by French General Louis Franchet d’Espèrey – broke through the Macedonian front and rapidly advanced to Sofia, the Bulgarian capital. This forced Bulgaria to seek an armistice (CAB 23/14/33, FO 371/3148 file 6102). 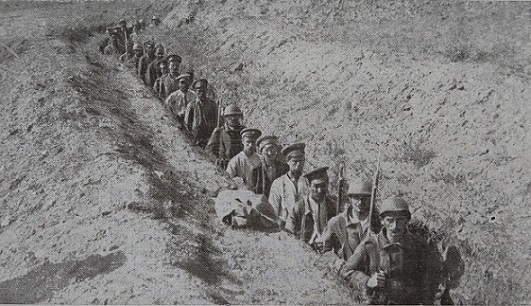 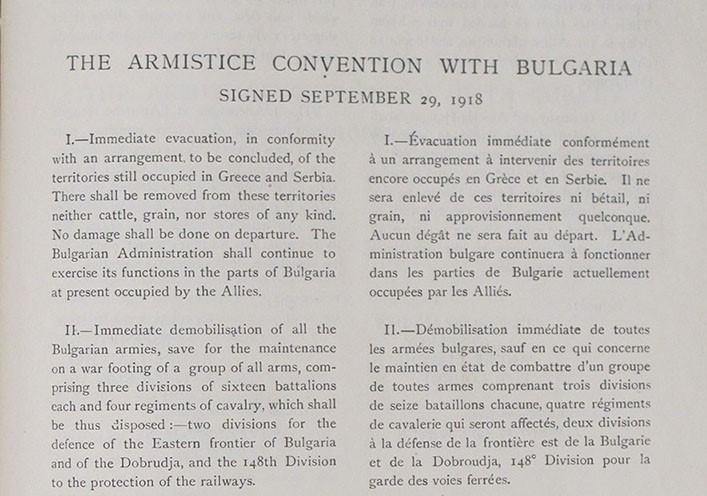 The armistice was signed at the General Headquarters of the Allied Army of the Orient at Salonica at 22:50 on 29 September, and was to come into force at 12:00 noon on 30 September. It was signed by General Franchet d’Espèrey, Bulgarian General Ivan Loukov and Bulgarian cabinet minister Andrey Lyapchev. 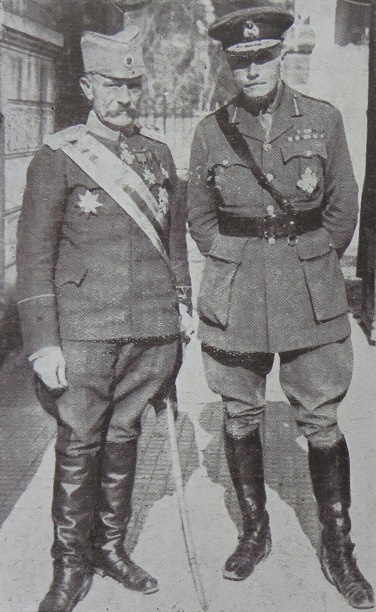 The speed of the advance of the Allied Army of the Orient had taken the British War Cabinet by surprise. The officer commanding the British forces on the Macedonian front was General Milne, who acted under the orders of General Francher d’Esperey, but there were no British officers on the French general’s staff.The Prime Minister, David Lloyd George, expressed concern that he had not received full situation reports and had to learn about developments from the French Prime Minister, Georges Clemenceau. The war cabinet resolved that

a senior officer should be posted at General Franchet d’Espèrey’s headquarters, in a position similar to that occupied by General Du Cane at Marshal Foch’s Headquarters. (CAB 23/14/35)

Later, in a rather fractious Three Power discussion on 30 October 1918, Lloyd George complained to his French and Italian counterparts – Georges Clemenceau and Vittorio Orlando – that

Despite the tension between the Allies, the Bulgarian surrender meant that the forces in the area could concentrate their efforts towards shortening the war by reaching Constantinople in Turkey and Belgrade in Serbia. The armistice terms remained in force until the signing of the peace treaty between Bulgaria and the Allies – the Treaty of Neuilly-sur-Seine – on 27 November 1919 (FO 93/21/7).

We plan to publish more blog posts in the series Milestones to Peace over the next few months, to coincide with the armistices signed by Turkey, Austria-Hungary and Germany, the Paris Peace Conference, and the subsequent peace treaties with all of the Central Powers.

There will also be a post on the Peace Day celebrations which took place across the UK on 19 July 1919.

All of the armistices and treaties will be shown together for the first time during the conference ‘Peace making after the First World War’ taking place from Thursday 27 to Friday 28 June 2019.