Files released by the Security Service (better known to you and me as MI5) are among the most popular records in our collection, especially with journalists.  The arrival of new material at Kew gives the press office and our colleagues in the records knowledge team the chance to delve into the secret history of our nation; a world of double agents, Bond-style gadgets and wartime intrigue.

Most of the new documents are personal files on individuals suspected of being enemy agents, Communist Party members or other ‘fellow travellers’.  This is the 28th such release to The National Archives and over the years, a host of well-known names have featured in the files, including poets and writers such as Cecil Day Lewis, P.G Wodehouse, W.H Auden, Arthur Ransome, Ezra Pound and George Orwell.

In the most recent release, available online today, one name stands out, that of Charles Spencer Chaplin, the silent era superstar known affectionately around the world as Charlie Chaplin. But can we even be certain that was his real name? As the new file reveals, a certain degree of mystery still surrounds the circumstances of his birth. Incredibly his birth certificate has never been found, leaving space for conjecture including the recent suggestion that he was born in a caravan in Staffordshire (he had Romany Gypsy roots). 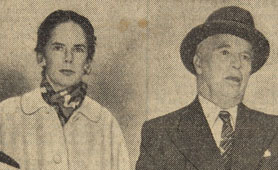 Charlie Chaplin and his wife Oona in London, 1953

Chaplin had attracted the attention of the American authorities for his alleged links to Communist-front organisations and was refused re-entry to the country in 1953. In 1952 the US Embassy in London wrote to MI5 asking whether it held any information on Chaplin which could confirm his Communist contacts. The answer, from then-Director General, Sir Percy Sillitoe, was that they could find ‘no trace in our records of this man’. The Americans also asked if MI5 could ascertain ‘whether Chaplin’s correct name is Israel Thornstein, as has been alleged’. This reflected persistent rumours that Chaplin was in fact of Russian or German Jewish origin. Perhaps conscious of the little information they had to offer, the file shows that the Security Service launched a mini-investigation into the circumstances of his birth so that they could ‘at least clear up this point’. The results were fascinatingly inconclusive:

‘We can find no evidence that Chaplin’s name is or ever has been Israel Thornstein, nor can we find any evidence of the existence of such a person. Although Chaplin’s claim to have been born in London on 16 April 1889 has been accepted by the Passport Office since 16 September 1920…we cannot trace particulars of his birth at Somerset House. This suggests that his name at birth may not have been Chaplin or that his birth did not take place in this country. We have been unable to discover any other name by which he has been known.’

A Special Branch note later in the file points to evidence that Chaplin may in fact have been born in France:

‘One source of information, however, which is usually considered fairly reliable, claims that Chaplin was born near Fontainebleau, near Paris.’

But further enquiries with the French authorities failed to establish any evidence to support the claim.

It seems remarkable that basic biographical information for one of the country’s most well-known figures continues to elude us but perhaps one day we’ll discover the truth. In the meantime, the new MI5 file on Chaplin has only served to deepen the mystery…