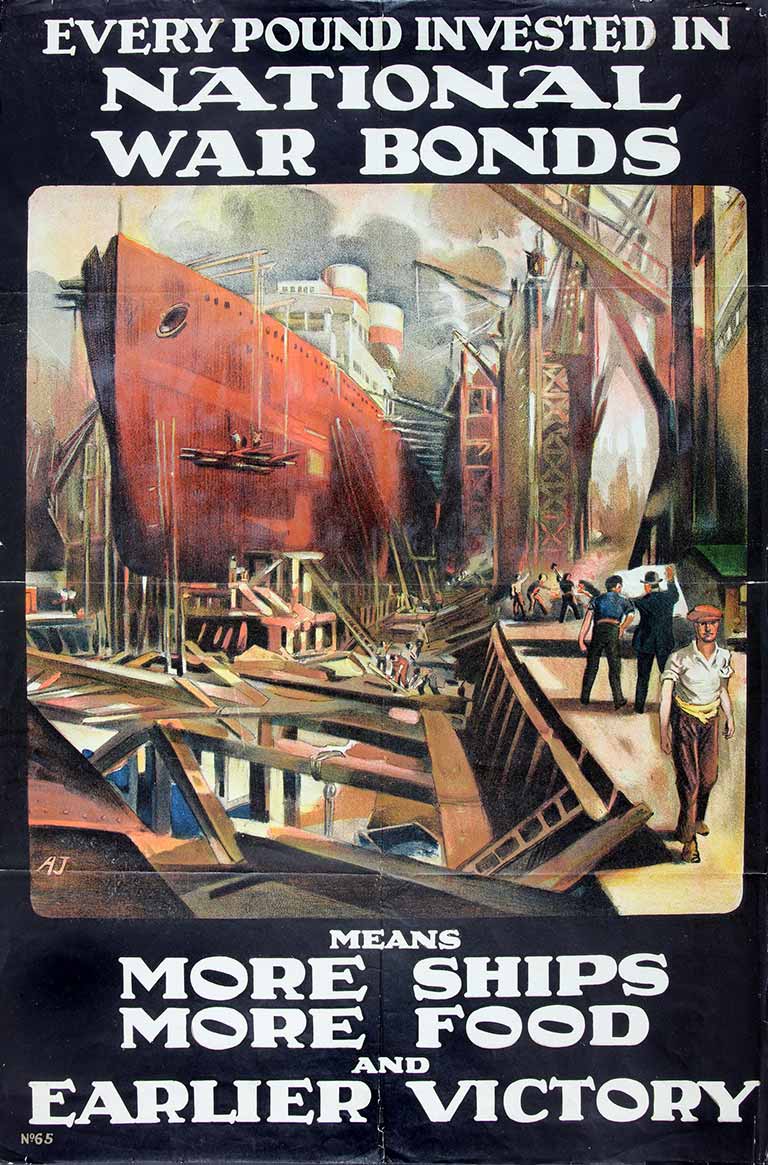 Battles and diplomacy naturally tend to dominate the narrative of the First World War, but little of either would have been sustained for long without the logistical efforts of the Merchant Navy. For the British this contribution was critical – not just delivering the means to fight to the operational theatres, but underpinning the entire war effort with sustenance and raw materials.

The National Archives has singled out February as a month to reflect on shipwrecks and losses at sea, and this blog, drawing on two case studies, will specifically look at the cost paid by the merchant marine.

A tale of two Laconias

A few years ago I gave a talk on the strange tale of RMS Laconia, a Liner operated by Cunard White Star Line. Laconia was launched in 1921 and had a relatively uneventful service until it was requisitioned in 1939 and converted into an Armed Merchant Cruiser by the Admiralty. It was used as a troop carrier and on one such voyage was used to carry Italian prisoners of war back to Britain.

It was during this voyage in September 1942 that Laconia was spotted by German U-boat U-156 and torpedoed. When Kapitanleutnant Werner Hartenstein realised that the ship was carrying women and children passengers as well as prisoners of war, he surfaced and bizarrely attempted a rescue. He was aided by several other U-boats all displaying Red Cross Flags. However, the rescuers were attacked by American bombers based on Ascension Island and the U-boats were ordered to dive and abandon the survivors. The incident led Karl Donitz to issue the Laconia Order, forbidding submarines from picking up survivors.

While the Laconia story was intriguing enough, while I was researching I discovered that the Laconia was a replacement ship for another Cunard Liner, also called Laconia, whose history was remarkably similar. It too was requisitioned for war service in 1914 and converted into an armed merchant cruiser. It resumed passenger service with Cunard in September 1916 and in February 1917 was torpedoed, this time by U-50. The first torpedo did not sink the Laconia, but it was torpedoed a second time and this time the explosion ripped through the engine room and doomed the ship. Twelve people were killed including two female American passengers – mother and daughter Mary and Elizabeth Hoy. Their deaths added to the growing voice in America to support the war. So the loss of both ships had consequences far beyond their sinking.

The first Laconia was rediscovered in 2009 approximately 300km of the coast of Ireland; the search for it was the subject of a Discovery Channel programme. Rather poignantly, one of the artefacts recovered from the ship was a shoe belonging to one of the female passengers.

Recent popular histories have gone some way to drawing our attention to the animal cost of the First World War. Though a showcase and catalyst of modern technologies, the war also placed huge demands on animals for transport, particularly horses and mules. Pre-war British administrations had gone some way to calculate the number of suitable beasts available in the UK for military purposes, but the demands of war soon outstripped domestic supply.

As a result, over the course of the war hundreds of thousands of animals were bought and sent to British fighting theatres. The Canadian Commission sent from North America 428,608 horses and 275,097 mules; from South America came 6,000 horses and 1,500 mules; and from Spain and Portugal came a further 3,700 mules. Naturally these animals were transported by sea, the most efficient and quickest means available. As with all shipping in support of Britain’s war effort, however, this became increasingly dangerous in line with enemy activity at sea.

In simple statistics, 1917 clearly stands out as a costly year for animals on ships. Though not the peak for horses transported – that came in 1915 – ‘wastage’ rates at sea were extremely high. Keeping animals alive and disease-free on long voyages and in cramped conditions was often difficult enough, although experience gained from the Second Boer War had delivered quite dramatic improvements in this area. What crews had less control over, however, was enemy action. In terms of simple numbers, attacks at sea saw on-board horse losses jump from a high of 1.95% in 1915 to 3.52% in 1917, in the most part thanks to a staggering 2,732 animals going down with ships (figures from Statistics of the Military Effort of the British Empire During the Great War, 1914-1918 (HMSO, 1922)).

Perhaps the most famous of animal transport losses was the SS Armenian in 1915, on which 1,400 mules were lost along with 29 members of the largely American crew (the real reason for its notoriety). As the rate of attrition for 1917 suggests, however, such losses were commonplace. One other example was the SS Tritonia, owned by the Donaldson Line of Glasgow at the time it was sunk. On 27 February 1917, on a voyage from Halifax to Glasgow with general cargo and horses, it was torpedoed by the German submarine U-49, 20 miles off the south-west coast of Ireland. All the cargo – including the horses – was lost. Sadly, Assistant Horse Foreman Ernest Tetreault, a Canadian, suffered the same fate as the animals in his charge.

We often focus on passengers, troopships, munitions or food when considering submarine warfare and merchant shipping losses; perhaps we can also spare a thought for the animal cargoes that failed reached their destinations.

The National Archives holds a variety of records that can support your research on Merchant Navy wrecks, many of which have been flagged in our guide on ships wrecked or sunk. You will also find ships mentioned in the casualty records of the Commonwealth War Graves Commission, and can trace crews using the 1915 Crew Lists project.