A log book is the official record of life on a ship, and includes information about what has happened during each voyage. The requirement for the master of a ship to keep official log goes back to about the 18th century; as a result of the Merchant Shipping Act of 1850 British merchant ships were legally required to keep an official log.

From 1852 logs start to appear among official records, but after 1874 they appeared to be routinely discarded when vital information had been extracted. However there was a legal requirement to keep logs that contained information on a birth, marriage or death as this was often the only recorded mention of the event. The ships’ official logs can be found at the National Archives in series BT 165.

Starting in 2014, The National Archives recruited volunteers to transcribe the information contained in ships’ official logs into our online catalogue. There are over 40,000 merchant navy ships’ logs in BT 165 series. Their catalogue entries have been enhanced as part of a project supported by dedicated team of volunteers and staff from the London Family History Centre as well as The National Archives.

Volunteers worked with great care to extract information from each and every log, such as ship name and official number, as well as the date(s) of voyage(s). The combined effort of each volunteer’s work was invaluable in making this collection more accessible: it is now searchable by ship name as well as official number and date of voyage on Discovery, our catalogue.

What the logs tell us

Official logs of British merchant ships provide details such as the nature of voyage, and the port and date at which the voyage commenced and terminated. The logs also provide details of the crews, for example the capacity in which they were engaged on board the vessel and their characters. 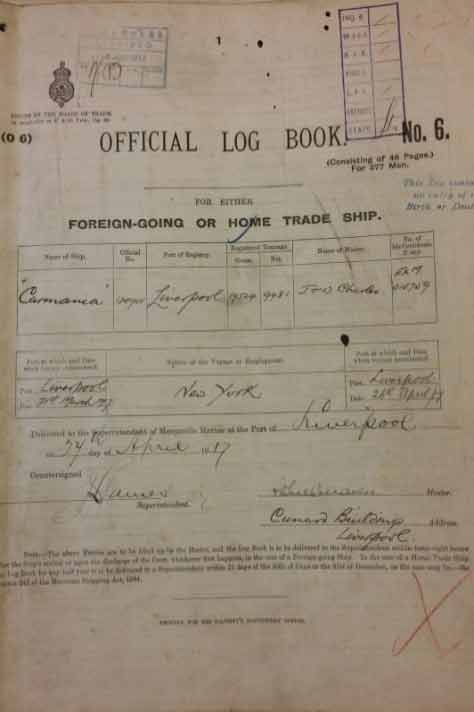 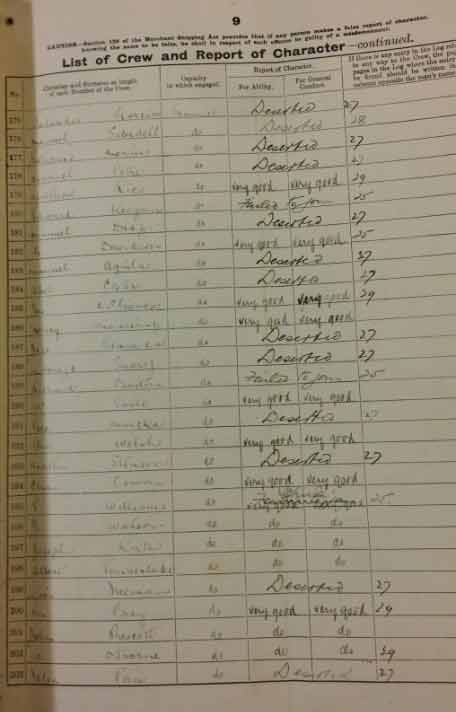 Unfortunately the official logs are not always a daily diary of a ship’s life or the activities of crew or passengers. They can be more of a ‘parish register’ for the ship, noting vital information about the crew and passengers. These include new arrivals on board (such as births or the signing on of a new crew member); departures (such as death, disappearance, desertion, or signing-off of a crew member at an intermediary port before the end of the voyage); marriages and illness. These can be seen for example in the log belongs to SS Umkuzi (BT 165/1337), which registered the death of four Indian emigrants. 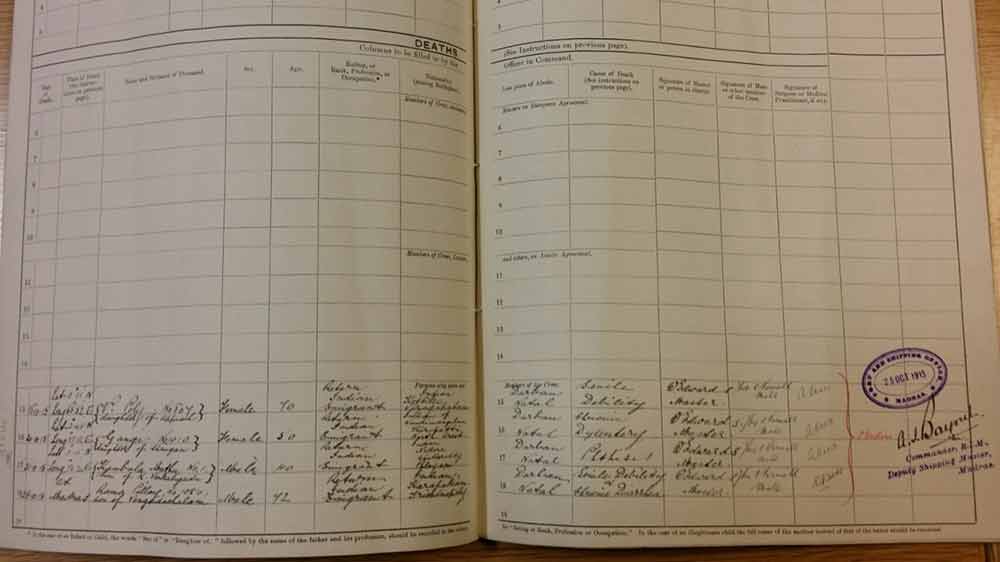 A ship’s official log can also show details of disciplinary action taken against crew member or passengers on board, such as the log of SS Teucer (BT 165/1663). This ship was used to transport the first Chinese Labour Company of about 1000 from Wei-Hai-Wei via Yokohama to England; during the voyage some of the labours were put in irons as a result of ‘inciting to mutiny’.

Generally logs also provide a snapshot of life at sea. The log of SS Cassis (BT 165/986) graphically portrays of the withdrawal symptoms from alcohol which lead to the suicide of a crew member.

Researchers of the First World War will also find the collection useful as all surviving logs for the period between 1914 and 1919 have been preserved and form part of the series. SS San Wilfredo was a British tanker belonging to the Eagle Oil Transport Company; the ship’s log details how the vessel hit a German mine. This was the first British merchant vessel to be sunk just one day before Britain formally entered the First World War, and the crew one of the first to be taken as prisoners of war.

This project will certainly enhance the reader’s appreciation for life at sea, and for the lives and personalities of the crews of these vessels plying their trade both in peacetime and war.

Find out more information about volunteering at The National Archives.