Maybe it’s because I’m a Londoner

One of the many legacies of the United Kingdom’s colonial past is the number of British-sounding place names to be found in various parts of the world. From Birmingham in Alabama to Canterbury in New Zealand, and from New York to New South Wales, these names reflect the English, Scottish, Welsh or Irish heritage of many of the people who settled in those places.

Even before the UK’s capital hosted this year’s Olympic and Paralympic Games, the most famous British place name of all was undoubtedly London. For today’s blog post, I’ve decided to use a small selection of our maps to illustrate some of the world’s other Londons. 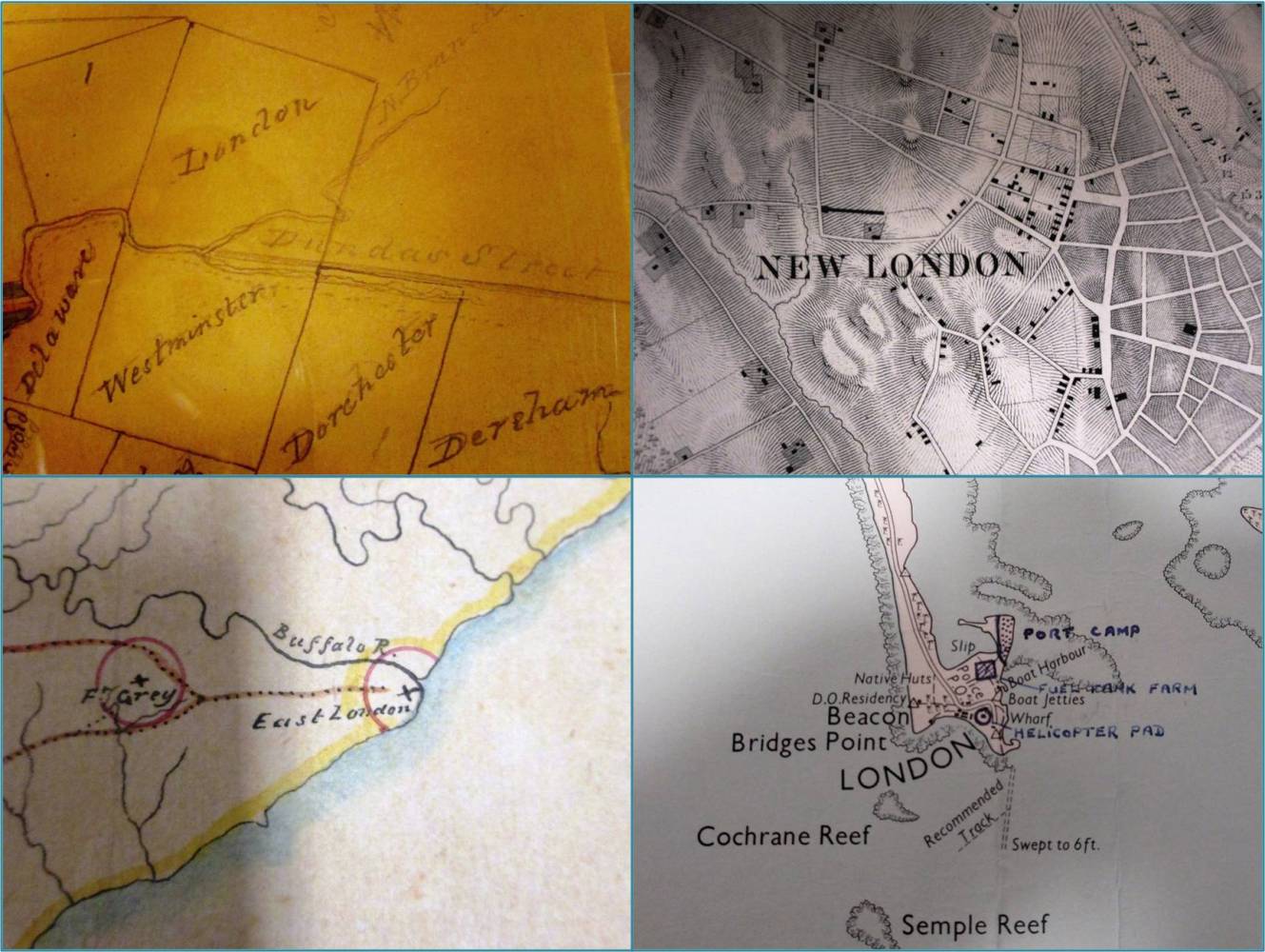 The oldest of the four maps above is the one at the top left (document reference MF 1/30/2), dating from 1820. It is a sketch map, drawn on tracing paper, showing plots of land in the south-western part of what was then called Upper Canada (now the Canadian province of Ontario). This map was originally enclosed in a despatch sent back to the mother country by the lieutenant governor of Upper Canada, Sir Peregrine Maitland. Many of the English place names marked on it (London, Dereham, Dorchester and Westminster are just a few of them) are still in use in the area today.

Strictly speaking, the map at the top right (document reference MR 1/1789/26) is not a ‘map’ but a ‘chart’ (a map of the sea). It shows New London and adjacent coastal areas, in the US state of Connecticut. Like ‘old’ London, this city lies on a river called the Thames 1. The chart was published by the United States Coastal Survey in 1848. We hold it as part of a set of charts of coastal areas in North America, which was collated for the Anglo-American Fishery Commission in 1862.

The map on the lower left above (document reference MPG 1/931) shows part of the coast of south-eastern Africa. It was hand-drawn in 1856 and included in Colonial Office correspondence relating to the Cape Colony. At that time, the area around East London was referred to as ‘British Kaffraria’ 2. It is now part of Eastern Cape Province in South Africa.

The fourth map above (document reference MFQ 1/1049) is much more recent than the other three, dating from 1956. It is a printed British military map of Christmas Island (now officially called Kiritimati) in the Pacific Ocean. Our copy was annotated in 1957 to show the sites of radio transmitters and landing strips and was included in the Operations Record Book for Royal Air Force Squadron 240. Kiritimati is now part of the independent country of Kiribati; London (also known as Ronton) is the island’s second-largest village.

Even within the UK itself, there are multiple Londons. For instance, many small settlements in England and Wales bear the name Little London. The example on the left above (document reference IR 126/6/25) shows a Little London in Berkshire 3 in 1913. This map forms part of the Valuation Office survey.

The map on the right above (document reference OS 38/1479) shows the Hertfordshire village of London Colney. It was produced in 1947 to record a small change in the parish boundary and ensure that Ordnance Survey could show the new boundary correctly on future editions of its published maps 4. This map now forms part of the Ordnance Survey boundary archive.

Place names can at times be controversial and one of the most debated and disputed naming issues relates to the use (or non-use) of the element London. Some people call the second largest city in Northern Ireland Londonderry and others call it simply Derry. The use of one form or the other often indicates the speaker or writer’s political views and religious loyalties. Writers anxious not to give unintentional offence sometimes use a combined form, such as Derry/Londonderry 5.

The 19th century Ordnance Survey of Ireland, which produced the map on the left above (document reference MR 1/1185) had no such qualms. This map came to us as part of the War Office map collection.

The map on the right above (document reference FO 925/1751) shows a much less controversial Londonderry, an island near the southern tip of South America, now part of Chile 6. The island was named by a British naval captain, Robert FitzRoy, after the Marquess of Londonderry.

Like the map of New London, this ‘map’ is technically a chart, in this case an official British Admiralty chart. It was published in 1880 but was largely based on earlier surveys carried out during Captain FitzRoy’s voyages on HMS Beagle 7 in the 1830s. Our copy of the chart forms part of the Foreign Office map collection. 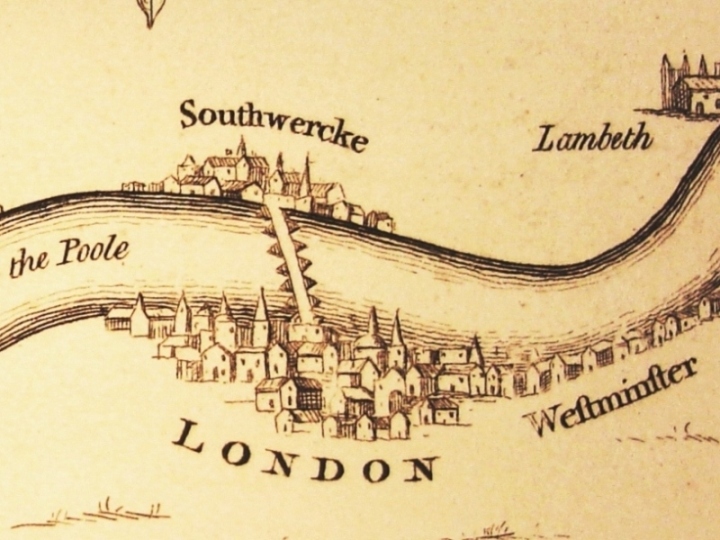 The London that everyone knows, albeit from a slightly different perspective (detail from MPF 1/128)

I couldn’t finish without including a map showing the original London (document reference MPF 1/128). I’ve chosen a slightly unusual one. Can you spot what is special about it?

For budding researchers: Browse our guidance on researching the histories of places

For family historians researching London-based ancestors: Listen to our ‘Lost in London’ podcast

For teachers and pupils: Explore our online exhibition on the British Empire

Elsewhere on the web: