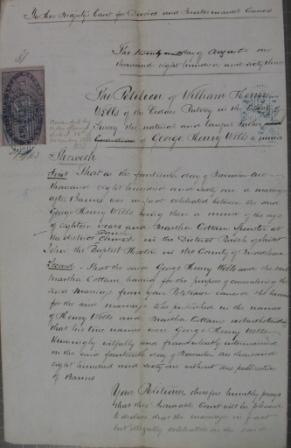 Petition for decree of nullity of marriage 1863

In 1861 a marriage took place between Henry Wells and Martha Cottam, both of ‘full age’ and after the calling of the banns on three successive Sundays. There was nothing to distinguish this wedding from countless others, but the story that unfolded afterwards was very unusual indeed. Sadly, the marriage was not a success, and in 1863 Mrs Wells petitioned for a divorce on the grounds of her husband’s adultery and cruelty. She alleged that he had not only committed adultery but had given her a venereal disease. He was also violent, having held a loaded gun to her head, and on another occasion hit her on the head with a lobster!

After she filed her petition, and her husband made a reluctant response, no further papers were added to the file. A petitioner might drop a case for all kinds of reasons, perhaps lack of funds, or some kind of out-of-court settlement. Neither was the case here. Instead, a completely new suit was filed a few weeks later, from William Henry Wells against ‘Martha Cottam, falsely called Martha Wells’. William Henry Wells was not her husband, he was her father-in-law, and the petition was not for a divorce, but for a decree of nullity. His contention was that his son, George Henry Wells, was aged only 18 at the time of the marriage, and therefore a minor, unable to marry without his father’s consent, so the marriage had not been valid in the first place. Furthermore, the banns had been called and the marriage performed using only the groom’s middle name, Henry, in a deliberate attempt to avoid detection by his father.

Mr Wells senior won his case, and the marriage was declared null and void. This meant that as far as the law was concerned, no marriage had ever taken place. So, since she had never been married in the first place, Martha had no claim against her ‘husband’ that could be heard in the divorce court, no matter how outrageous his behaviour. 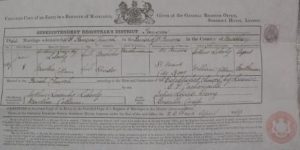 This bad experience did not, however, put Martha off the idea of matrimony, and in 1865 she married again, describing herself as a spinster which, of course, she was. This time her husband was Arthur Lasenby Liberty, then a manager at Farmer and Rogers Oriental Warehouse, but who later founded the famous Liberty department store. This marriage lasted longer than her first, but Martha found herself in the divorce court once again, this time as the respondent. In 1869 Arthur Liberty filed a petition for divorce on the grounds of Martha’s adultery with one Augustus Glover. The report of the case in The Times describes Martha as an actress, and says that she had continued in the profession after her marriage. The co-respondent, Augustus Glover, was an actor, and the servants testified that he had several times ‘clandestinely passed the night in the house with her’ in August 1868, while her husband was away.

Arthur Liberty married again in 1875 to Emma Blackmore, the daughter of a tailor from Exmouth in Devon, and this is the marriage that is listed in most printed sources, including his entries in Who’s Who and the Oxford Dictionary of National Biography. They do not mention his marriage to Martha at all. It may well have been an episode he was eager to forget, but when he married Emma in 1875, describing himself as ‘bachelor’, he was not trying to conceal his earlier marriage. On the contrary, this marriage was by licence, and the allegation held in the Bishop of London’s Registry relating to this licence includes all the details of his first marriage and divorce. There does not seem to have been any problem regarding the re-marriage of a divorced person in the Church of England; as far as I have been able to ascertain, the Church had yet to formalise its position in these early years, when divorce was still quite rare, and the law had been in place for less than two decades.