For all those still suffering with Olympics withdrawal symptoms, never fear – the Paralympics are here!!

In their honour, my blog today is dedicated to the story behind the London 2012 Paralympic mascot – Mandeville. 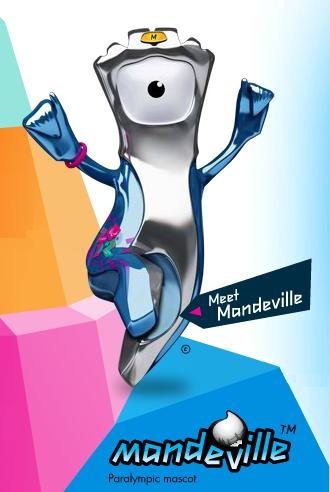 This cute little drop of steel from the Olympic Stadium (that’s what he is, apparently – you can learn more about Mandeville’s creation), is named after the original home of the Paralympics – Stoke Mandeville Hospital in Buckinghamshire, on which we hold a number of files.

Sir Ludwig Guttmann was a pioneering doctor at the hospital in the 1940s who recognised the importance of physical activity in the rehabilitation of injured soldiers during and after the Second World War.

A special spinal injuries unit opened at the hospital in 1944, initially with the specific aim to prepare for casualties from the upcoming D-day landings. After Guttmann saw patients in wheelchairs hitting a wooden puck with walking sticks, wheelchair polo was born, followed soon afterwards by wheelchair netball. Both were games that strengthened muscles and morale amongst patients and, along with other competitive and occupational tasks, were actively encouraged at the hospital.

The first Stoke Mandeville ‘games’ were launched in 1948 on the same day the second London Olympics began. The first competition consisted only of archery, but the Star and Garter Home in Richmond were challenged and 16 people took part. The Star and Garter won and were awarded the Challenge Shield. 1 The Paralympics were born!

The competition has come a long way since. Over the next 10 days, athletes from all over the world will compete in 21 different sports, no doubt cheered on by Mandeville – a little reminder of where it all began!

Tomorrow we will be marking the start of the Paralympics with a free public talk at 14.00 by Dr Julie Anderson on her research in records held at The National Archives and elsewhere, ‘From wheelchair polo to winning professionals: the history of the Paralympics’. This is open to all, and will be available as a podcast on our website soon afterwards. Her book, ‘War, disability and rehabilitation in Britain: Soul of a nation’ is also available to view in our library.