Sometime ago, while browsing Discovery, our catalogue, I came across the file WO 161/117: drawings, photographs and plans of Remount Depots. What a delight!

I didn’t know much about the Remount Department and – apart from seeing the play ‘War Horse’ – the horses that were used extensively during the First World War. This document, an album of atmospheric photographs, made me want to explore more.

Between 1914 and 1918 Britain’s war effort was dependent on its horses. At the start of the war, horse power was still a key method of moving the army and its supplies to destinations across Europe. The volume of military stores and rations required at the front was much greater than it had been in earlier conflicts. Even though the importance of the cavalry was in decline and motorised transport was becoming more reliable, trench warfare meant that provisions had to be brought in from a distance and very often over ground that wasn’t suitable for other means of transport. There was an urgent demand for large numbers of draught- and packhorses, mules and other animals.

The Army Remount Department was the body responsible for the purchase and training of horses and mules between 1887 and 1942. Prior to the First World War the British army possessed around 25,000 horses; by the middle of 1917 this had increased to around 600,000, plus camels and oxen.

In 1911, as the prospect of a war in Europe war loomed, the Remount Department and the police conducted an inventory of horses, to enable them to select around 130,000 animals which could be called up in an emergency (HO 45/10659/212708). Under the Army Act of 1912 (WO 32/8947) it was possible to requisition horses when needed, ‘on payment of a fair price and subject to the owner’s right of appeal to the County Court’.

The Remount Statement of 1913-1914 gave the army’s detailed requirements regarding the numbers of horses required on mobilisation, for each command and for the individual units mobilising under its orders. 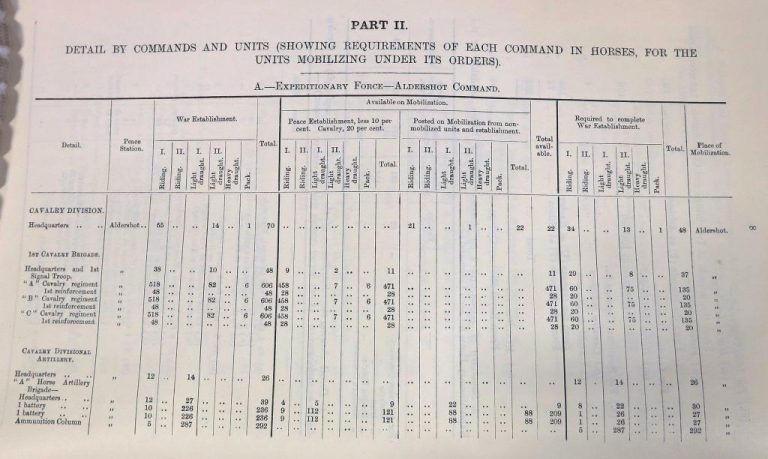 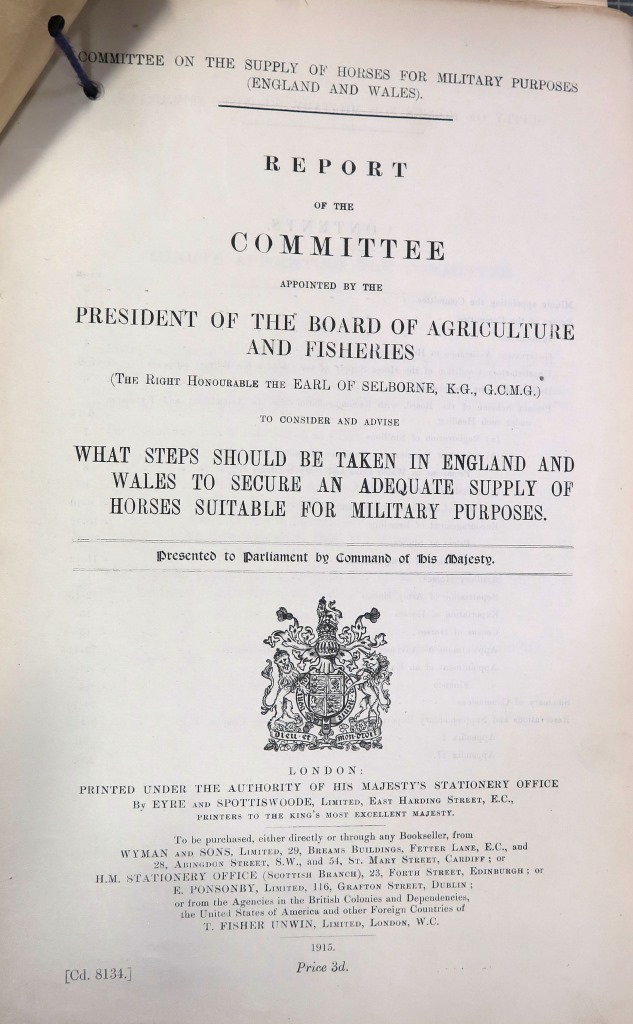 A committee appointed by Lord Selbourne was set up to consider and advise on what steps should be taken in England and Wales to secure an adequate supply of horses suitable for military purposes.

The committee’s report of 1915 found the situation to be extremely poor. It made many criticisms, including a statement that sires were inferior:

‘these horses are of so poor a stamp as to be of no military value. No one who goes carefully through the horses in either a country or urban district can fail to be appalled at the number of animals which by faulty conformation or obvious unsoundness, are quite unsuited for hard work.’

The board recommended a number of changes to ensure the future quality of horse breeding, including:

The National Stud grew from these changes instigated by the Selbourne Committee.

In order to handle the large numbers of animals, camps were set up across the country, with four main camps serving the most important ports. The first of these was on the outskirts of Romsey (WO 161/117 folio 24), serving Southampton; as did Swaythling, situated on the north side of the port. Ormskirk served Liverpool and Shirehampton served Avonmouth (WO 161/117).

The Romsey, Ormskirk and Shirehampton camps were used for horses and mules arriving from overseas; Swaythling was a collection centre for animals being shipped abroad. Several other smaller depots were established throughout the country for the receipt of locally-bred horses.

The capacity and complement of each depot increased dramatically from their establishment. At Swaythling, for example, in April 1919, around 3,500 horses and mules were stabled and cared for by 757 men. 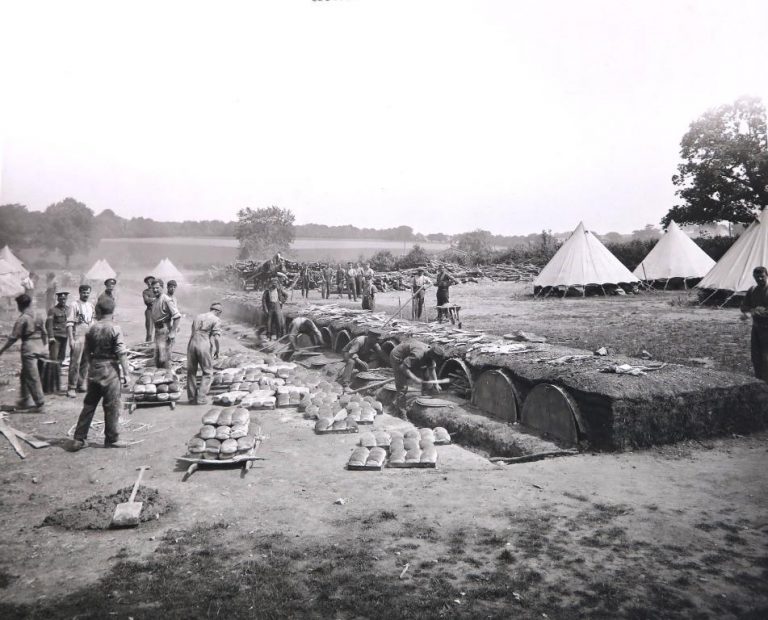 The camp at Swaythling collected animals from smaller camps all over England and shipped them to France; it was also one of the centres where horses were given a final overhaul before being sent to war. They also received returning animals at the end of the war. Alongside this, Swaythling trained thousands of men to be sent to look after the horses overseas.

Romsey camp received its first horses – just 20 – in March 1915. By the end of the war it had processed about 120,000, around 10% of the animals acquired by the Remount Service. Its primary function was to train horses and mules for war service, and by 1916 there were over 2,000 men stationed at this camp. They were divided into squadrons, with each containing ‘rough riders’ to break in young horses, a farrier sergeant, shoeing smiths and saddlers.

As the war progressed it became increasingly difficult to find suitable men for these trades. Many men previously considered to be too old or unfit were medically upgraded as ‘fit to fight at the front’. Members of the Woman’s Land Army were bought in to work in their place. The recruitment and organisation of women who could be enrolled for work, and particularly for situations like this, became of national importance.

There were often more than 4,000 horses and mules in the care of the squadrons at Romsey. Sometimes as many as 830 horses might be received in a day. The general length of stay of each horse varied, but was usually between one and four months, either for training or recuperation. Romsey had a large isolation hospital, where sick horses could receive the best veterinary care. 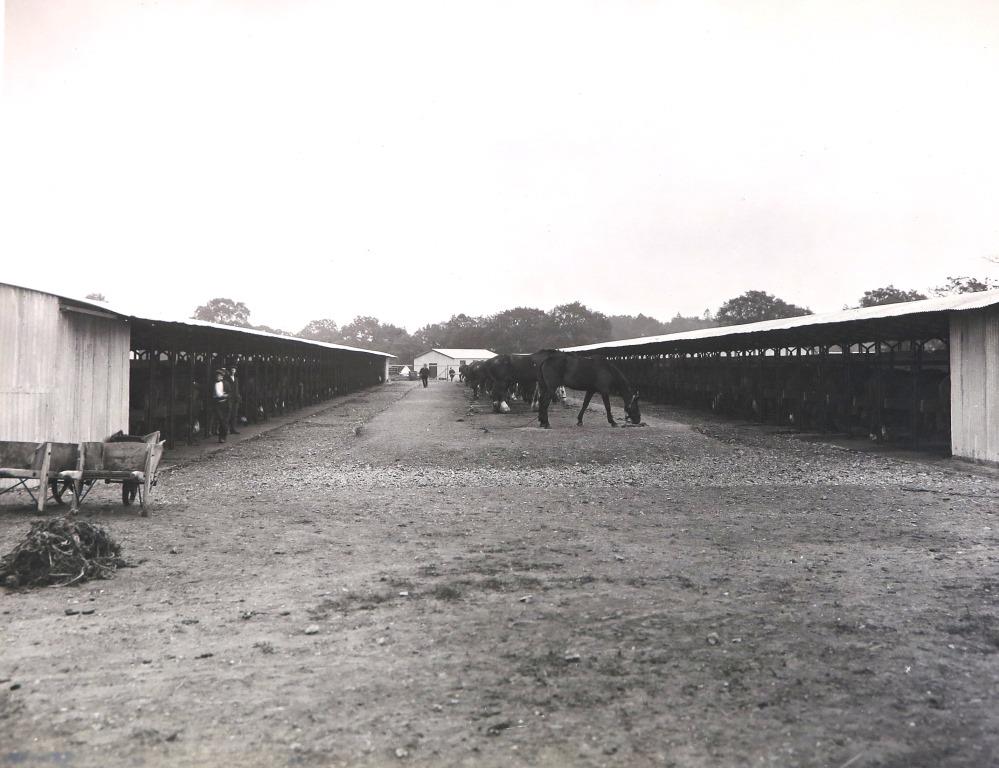 The demands of the First World War far exceeded the Remount Department’s expectations. Frequent calls were made for economies in the use of horses. In November 1915 the Prime Minister H. H. Asquith reminded the army of the need for a stringent control over expenditure, saying that he thought that horses had ‘played an unexpectedly small part in this War’.

Lord Kitchener, the Secretary of State for War, ordered the appointment in 1916 of a Committee to report on ways of reducing the number of horses. Sir W Birbeck, Director of Remounts, explained:

‘the horses remain under observation in the camps, followed by training, a process which weeded out all unfit, unsuitable and infectious animals. Without this and if animals were sent directly to France, very large and expensive arrangements would have to be introduced as well as infection being introduced into the war zone.’ (CAB 24/2/50)

The Army Council commented that it was already using bicycles wherever possible and expressed its strong opposition to civil servants meddling in military matters.

The initial phase of mobilisation passed without any serious hitches. Before the war, a list of retired officers willing to help with horse mobilisation programme had been drawn up.

Once these animals had joined their units, they needed to be fed and watered, and when they fell sick or were wounded they required – and often received – a high standard of veterinary care. Horses were as indispensable to the war effort as machine guns, railways and heavy artillery: the ability to mobilise these vast numbers of animals was crucial. This work was provided by the Horse Transport Company, the largest element of The Army Service Corps (ASC); we hold their war diaries in WO 95/5460.

The contribution of animals, especially to the transport services and artillery, was of central importance. Horses pulled the divisional supply trains nearer to the front lines; they pulled makeshift sledges carrying the wounded, over mud men could barely walk over; they took ammunition to the guns, food to the field kitchens and carried mail to the soldiers. Its fair to say that without them, the British army would have suffered immeasurably.