Magna Carta comes to life at The National Archives

On Monday 15 June, as part of the commemorations to mark the 800th anniversary of the sealing of Magna Carta, The National Archives opened its doors to 120 students from four different schools and to Discovery Education. With historical interpreters playing key figures from the 13th century, including King John, Queen Eleanor and Henry III, students were plunged into the events surrounding the different versions of the Magna Carta issued in 1215, 1225, 1265 and 1297. 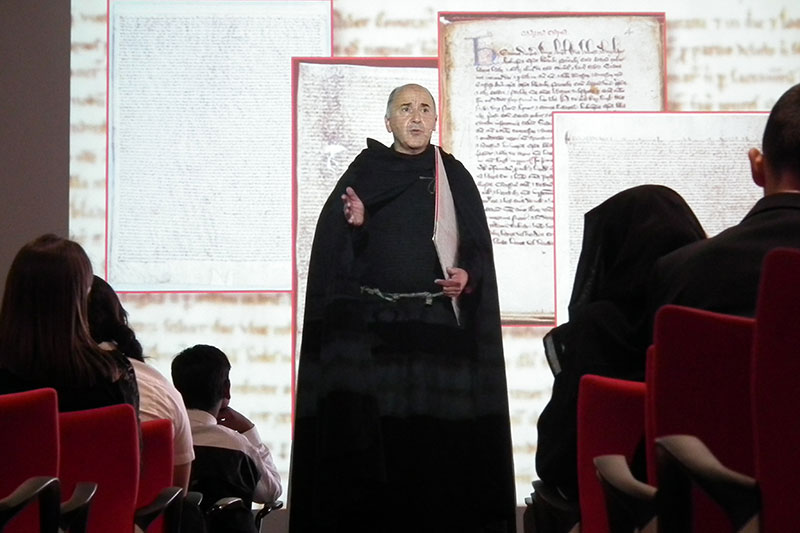 The morning sessions gave students the opportunity to work with original documents from the 13th century, as they grappled with questions about the importance of Magna Carta and the reasons behind its numerous re-issues. Staff from across the organisation were a brilliant addition to these sessions, as they worked alongside students, helping them to interpret medieval documents and to compile questions to put to records experts Nick Barrett, Paul Dryburgh, Laura Tompkins and Sean Cunningham. Historical figures Matthew Paris and Henry De Bracton also proved an entertaining interruption to the morning’s workshops, as they visited each group in turn and were ‘interviewed’ , or in some cases ‘interrogated’ by the students! 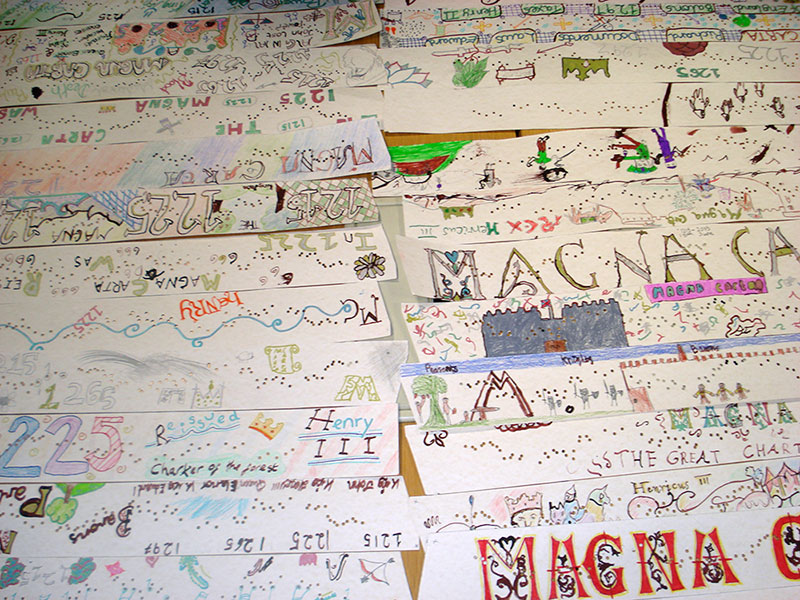 The afternoon sessions saw students mixing with their peers from other schools and using their newly gained knowledge about Magna Carta to work in very creative ways. Artists Poppy Szaybo and Sonya Patel Ellis worked with students to produce musical timelines of the key events surrounding each version of Magna Carta.  Julian Walker helped students to create their own clause for a contemporary Magna Carta and to officially sign it with their own wax seal. Suzana Tamamovich worked with original fabric and images, as students embroidered their own Magna Carta tapestries, and  Head of Education Andrew Payne helped students to create their own short films using ‘Shadow Puppet’.  Our Chief Executive and Keeper Jeff James and Director of Public Engagement Caroline Ottaway-Searle spent time with each of the groups in turn, chatting to students about the day’s activities and taking time to look at their work.

As students busily worked in their respective sessions, Discovery Education transmitted a live broadcast from the archives, reaching out to over 250,000 students in dozens of countries.

The day ended with an inspiring display of images from the day’s workshops and a presentation from Jeff James, before students were given the unique opportunity to see the 1225 version of Magna Carta on display. As they left the building, students were buzzing with excitement about the day’s events. One teacher commented afterwards that his students had missed their underground stop on the way home, as they had all been so busy discussing Magna Carta and the day’s activities at The National Archives!

The day was a huge success in so many ways; the students involved were engaged and enthused as they participated in the different workshops; it was wonderful to see the open reading rooms full of so much creative activity; and above all, it was brilliant to see staff across the organisation all working together to support students’ learning. Hear some of the students talking about their favourite parts of the day:

As well as our Chief Executive and Keeper, Jeff James:

The creative work that the students produced as part of the day’s workshops will be on display outside the Keeper’s Gallery in the autumn, so watch this space!