Mad dogs and even madder Englishmen

The nation’s rebellion against banning dogs from shops

Coinciding with National Dog Day on Monday 26 August, a newly discovered record at The National Archives shows the public outcry at the proposal by the Consumer Council to ban dogs from shops 45 years ago.

The 1968 file (ref: AJ 3/182) contains over 60 letters from members of the public in protest at this proposal. The vast majority of the public who wrote in stated that they would prefer to see children – as well as unhealthy humans  – banned rather than dogs as they believed that people were more unhygienic (looking at the image on the right, you might be tempted to agree!). 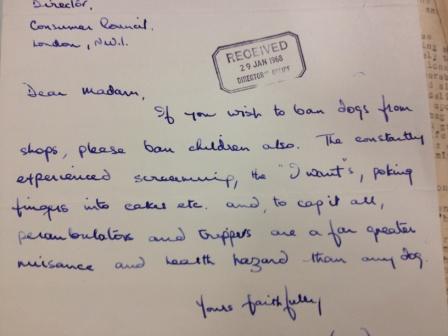 Barking up the wrong tree

The letters received show how the nation of dog-lovers was more concerned about the welfare of dogs, rather than the matter of hygiene. One member of the public went as far as asking the Consumer Council not to ban dogs just to ‘please a few Hitlers’ and another letter from an ex-pilot who fought in the Second World War argued that he ‘fought for the preservation of Freedom 1939-45 which included the individual freedom to enjoy dog companionship’. 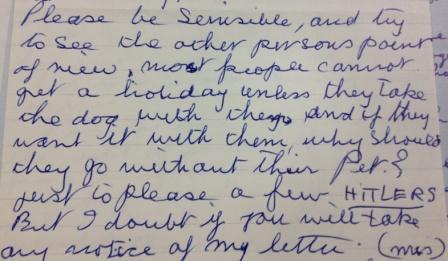 Throughout the correspondence, the public cited various reasons to try and convince the Consumer Council that dogs were less of a health risk than humans. This included the following observations showing their disgust for the hygiene displayed by the shopkeepers rather than dogs:

Dogs do not sneeze all over uncovered food.

Dogs do not keep their mouths open and breathe cold germs all over customers.

Dogs do not wear filthy overalls and lean against the counter on which uncovered food is displayed.’ 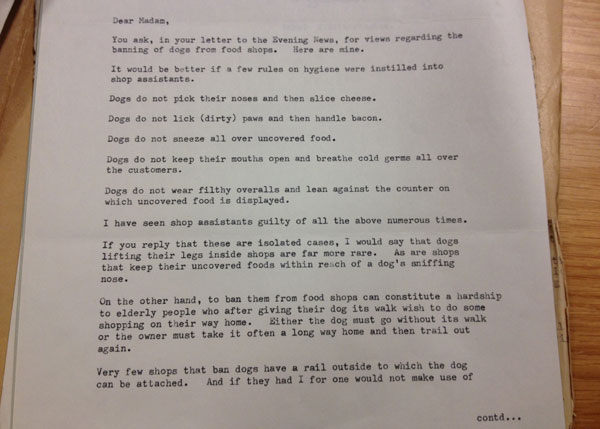 Another correspondent in the file even went as far as to consider the health benefits of dogs being allowed in shops and near food, commenting ‘For all I know, dog’s urine could be the antidote to all the harmful impurities, nuclear fall-out etc’. 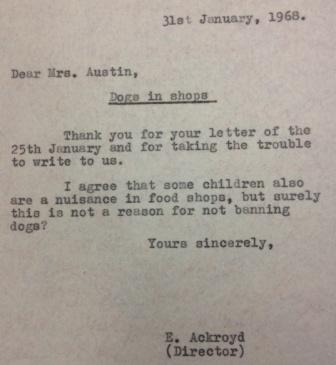 Amongst the letters are a couple of responses to members of the public from the Consumer Council. One of which, from the Director of the Consumer Council, reads: ‘Thank you for your letter […] I agree that some children also are a nuisance in food shops, but surely this is not a reason for not banning dogs?’

The correspondence contained within the file provides a fascinating insight into some of the thoughts and motivations of the British public and a unique piece of social history of Britain in the 1960s.

So if you were in any doubt as to whether we were a nation of dog lovers, I’m sure this record from the archives will show you just how mad we are about our dogs. However, I’m not sure where this leaves humanity, particularly our children!