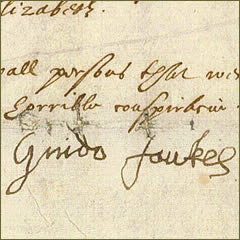 At the end of my last blog post I mentioned that I hadn’t seen one of our treasures – the confession of Guy Fawkes, until I was asked to produce it for a film crew.

This document was broadcast last night on National Geographic Channel in episode one of ‘Bloody Tales of the Tower’.

As before, this document (SP 14/216) is available to view at Kew to anyone with a valid reader’s ticket.

So, how does filming work?

Filming takes place during weekdays and, as a working archive, we need to balance a good filming service with the needs of the public and members of staff.

After all the paperwork is completed and a date and time scheduled, what service can film crews expect?

A few days before the agreed filming date a member of the press office orders up the documents that the crew wish to film, this is to assess the document and decide whether a conservator needs to be present during filming.

On the day, the film crew are met at reception by a member of the press office who escorts them to their filming location, where their requested documents will be waiting with book-rests, backboards, weights, gloves and other materials necessary for the correct use of documents.

Our main filming location is one of our repositories. Out of the 19 on site, we use the one with the least amount of ‘traffic’. During filming, crews have to pause to let a member of staff produce a document for a reader if required, but because fewer records are ordered regularly from this area, the risk of that happening is quite low.

This repository, contrary to popular belief as being ‘in the bowels of the building’ is actually on the top floor, it is very cool and often mistaken for a basement on screen. The temperature and humidity are controlled for conservation reasons and crews are advised to wear appropriate clothing before filming starts.

A member of the press office is on hand throughout the filming process. Their priority is to ensure the documents are handled correctly and archival best practice is followed. (They are sometimes also enlisted as an extra to push a trolley or turn a page so we get our five seconds of fame!)

Once filming is completed the press officer escorts the crew back to the foyer and returns the document, ending a (hopefully) smooth process for everyone.

We cannot accept all filming requests due to some of the above restrictions, however you may be interested to know we have been approached for feature films and music videos as well as documentaries.